(Bridge Hunter; Chicagology; It was between Taylor Street and Roosevelt Road.)

It was removed in 1929 as part of the river straightening project so it doesn't appear in a 1938 aerial photo either.

This bridge was used by the Chicago Terminal Transfer Railway to access Grand Central Station. The CCT was a corporate predecessor of the B&OCT.

This bridge was rare because it is a double leaf railroad Scherzer rolling lift bridge. The above view is looking north. The following map excerpt indicates it was between Roosevelt (12th) and Taylor. (The two roundhouses west of the river near Roosevelt are interesting.)
I include these excerpts from an 1897 map to provide context for how the river ran before it was straightened. Note that Lake Park has been developed (west of the IC tracks), but Grant Park has not been started (east of the IC tracks).

Given the grain elevators, this view must be looking south. This is the only view I remember seeing that shows the river before it was straightened.
These Scherzer rolling lift bridges replaced swing bridges.

To make room to build the rolling bridge, new approaches were built and the swing span was moved 53' upstream in the August 1899. ("Upstream" is technically not correct because the river wasn't actually reversed until 1900. But the rolling bridges were built by the Sanitary District of Chicago in part to provide the 300,000 cubic feet per minute flow needed to flush the Chicago River down the new canal. So Railway Age uses terminology that assumes the project is complete.)

It needed to move 53' to have enough room to swing open without hitting the new bridge.


To move it upstream, they built a wooden sliding way similar to what is used to launch ships. In the following photo you can see the new wood structure under the right (upstream) side of the opened span. 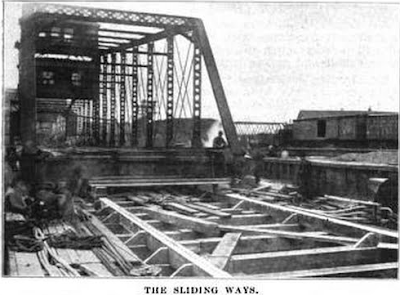 This is a closeup of the sliding way.  They used over 90 jacks crowded under the center part of the span to raise it 26" so that they could build a cradle to slide on the way. They smeared 500 pounds of beef tallow over the ways to lubricate them. After the span was lowered onto the cradle, they used the hoisting engines of two piledrivers anchored at the upstream end of the span.  "The jacking-up was begun on Sunday, August 13, and the span was turned into position for traffic on its new site on Thursday, work having been delayed 24 hours by the strike of the Iron Workers' Union Monday evening." [eBook, pp 608-609]

Daniel O'Hearn posted the question of where did the Rock Island service the locomotives for their passenger trains. That answer was the 47th Street Yard. A question concerning access to Grand Central Station came up in the comments. Thus David added two comments. The first one duplicates an above image, but the second one is a new view.
MWRD posted two photos with the comment:


The steamship Eber Ward after it collided with the Chicago Terminal Railroad Bridge on December 7, 1908. The collision caused damage to both the ship and the bridge and was a bad omen for the ship as it sank a few months later in April 1909 after suffering damage from icy waters in the Straits of Mackinac.

Jeremy Farmer Where are these images sourced from? Your own archive?
Metropolitan Water Reclamation District of Greater Chicago The historical photos we have been posting come from a vast collection of glass plate negatives created between 1889 and the mid-1900s. Digital imaging technology has improved greatly since the first plates were originally scanned about ten years ago, and we have recently entered into an Intergovernmental Agreement with the Illinois State Archives to rescan and catalog all 20,000 glass plates in our collection.
Staff from the MWRD and Illinois State Archives are working together with volunteers (including former MWRD Executive Director Richard Lanyon) to carefully scan each plate and to research and describe what each image depicts. The resulting digital files will be available online and by request from the MWRD and Illinois State Archives.
These amazing images are a valuable resource for the MWRD, wastewater and stormwater industry professionals, educators and students, historians, and all citizens. They provide an unparalleled glimpse of our great city and state during the early years of environmental protection and wastewater management. We are excited to share them with you.

This Chicago stereoview represents a distinct departure from the stereos I usually post.  Although it shows a Great Lakes schooner, it represents a much later and more common photographic medium.
This card is an example of the mass produced lithograph stereoviews made after 1900 by Keystone, Underwood, H.C. White and others.  These cards used stock images and were sold by the thousands in the Sears and Wards catalogs, mostly to older people who were nostalgic about the "golden days" of stereoviews in the 1860s and 70s.  The cards are usually on darker gray stock and are deeply curved, often showing scenes from Europe or Asia.  Unlike the classic locally made stereos of the 1860s and 70s, which were hand-mounted albumin prints made by the photographer, the post 1900 cards are machine mounted lithograph images.
Stereos of this era are less historically important and consequently, less valuable.  Still, the post 1900 cards sometimes contain lightly circulated views such as this one of the schooner W.O. Goodman passing under the bascule bridges on the Chicago River.
This is a nice view of the seldom-photographed Goodman.  Built in 1882 at Manitowoc by Rand and Burger, she sailed in the lumber trade out of Chicago for most of her career before going to the coast in 1906, sailing out of Boston.  Her documents were surrendered there in 1917 when she was presumably abandoned.
For more on the Goodman, see: https://greatlakeships.org/2902665/data?n=2

Brendon Baillod shared
Dennis DeBruler shared with the comment: "This is a new view of the Chicago & Northern Pacific (later B&OCT) double Scherzer bridge that provided access to the Grand Central Station. Lumber, along with grain and meat, were the commodities that made Chicago in the mid-1800s. South of 12th Street (Roosevelt) were several large grain elevators, and south of 16th Street along the north shore of the South Branch were several lumber yards. Thus today's street name of Lumber Street."

Posted by Dennis DeBruler at 1:37 PM