<update>
"The full Stickney facility is split into two plants—a western plant which entered service in 1930 and a southwest portion that opened nine years later."  [gizmodo] In 1929 the Supreme Court agreed with Wisconsin that MWRD could not continue to use Lake Michigan water to flush its raw sewage down the river. So that explains why MWRD built a plant in 1930. With the reduction of raw sewage in the river, a reduced flow out of the lake would be sufficient to keep the river from smelling. [Wikipedia] To reduce the flow, MWRD built a lock at the mouth of the Chicago River.

A video using the O'Brien WTP as the example. I learned they pump the solids here for further processing.
</update>

On May 21, the Metropolitan Water Reclamation District (MWRD) hosted an open house of their Water Reclamation Plants. I chose Stickney because it is the closest and largest. In fact, they still claim to be the largest in the world. (As the host explained, "largest" is like the tallest skyscraper, ---you get a different answer depending on what you choose to measure. I know that is the case with steam locomotives as well. UP's Big Boy is generally considered the largest. But if you consider horsepower to be the most important metric, then Pennsy's Q2 at 7,900hp is the largest. The host did not elaborate on what metric they use when they claim "largest." Their brochure says "one of the largest.")

This is the garden they had us wait in until the next tour could start. I learned later that it is one of their roof gardens. The district does practice the water conservation efforts that they are trying to encourage others to do such parking lot pavers and native prairie restoration. They also advocate rain barrels and surge ponds to put storm water into the ground rather than into the sewers.

They then had us move to a conference room to play a video and have questions and answers afterwards. Fortunately, I noticed that the video has been posted on line. But then it was removed. But I found the following update.
(new window)


During Q&A, I pointed out that the video did not mention that they now disinfect the effluent of some of their plants (Calumet and O'Brien). I learned that there are no plans to add disinfection to Stickney. Unlike the North Channel and Cal-Sag, no recreational use (e.g. kayaking) is envisioned for the shipping canal into which it dumps water. Plus I learned that the bacteria dies within two miles of the plant's outlet anyhow.

A typical treatment plant in Illinois handles one million gallons per day. This plant can process 1,440 million gallons per day (mgpd). That is, it can process in a minute what a typical plant does in a day. I remember the host saying that during a normal day they process 250 mgpd. But their brochure says 700 mgpd. The spare capacity is important in order to be able to handle storm water since Chicago has combined sewers. That spare capacity will be used extensively to treat the water caught in a reservoir once the TARP project is done. (TARP is a subject that is still on the todo list. Fortunately, MWRD has a web page about it.)

We then moved on to the control room where the host spent the entire time using this graphic on the wall to explain how the water is treated. I'll crop out details as part of the bus tour below.

One side of the area we were in was windows into the control room. 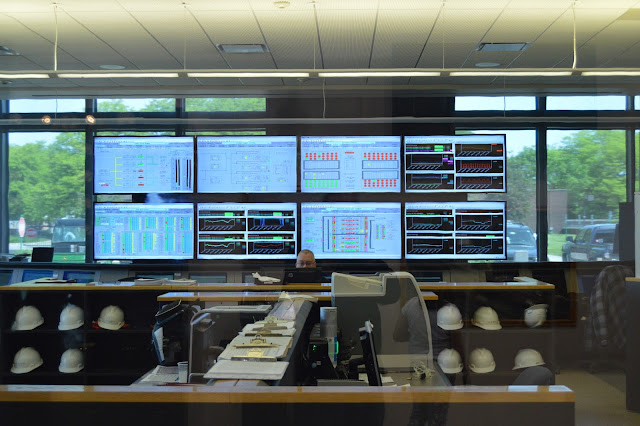 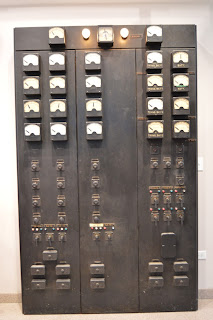 Along the opposite wall was some pictures of historical views and some artifacts.

Obviously, the panel on the right is one of the panels they used before computers became available.

This control stand is from an engine of their own railroad for hauling biosolids when the controls for the engine were upgraded.

As we left to get on a bus for a tour of the plant, I grabbed photos of the historical views they had on the wall. I added their text as the caption. (You can click on a picture to get a bigger version.)

The tour bus route took us in a direction that was opposite of the water flow through the plant. I'm going to discuss the photos in the order that the water flows. The first phase of treatment is passing through vertical steel bars spaced one inch apart. This protects the pumps from objects that would damage the pump's impeller blades. Periodically they rake off the collected trash. Of the odd objects they have seen, the one I remember is a bowling ball.

The pumps are in the pump and blower house. Fortunately, I took a lot of pictures because the only decent shot I have of the house is in the background of another shot. The pumps push the water up 55 feet from the course screens terminating the interceptor sewer to the Aerated Grit Tanks. Each pump has a 3,600hp motor. This is the only time the water is pumped. From there gravity is used to flow from one tank to another until it finally discharges into the canal.

I'll let the graphic explain the Aerated Grit Tanks (preliminary treatment). (Remember, you can click the picture to get a larger version.) 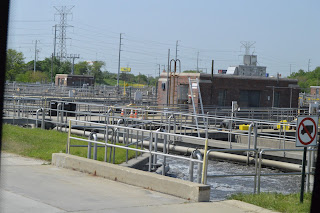 This is the area of the Aerated Grit Tanks. 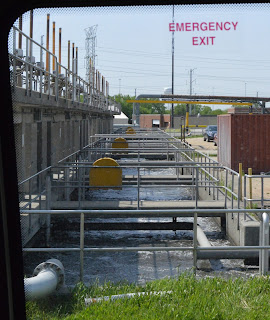 A side view of a tank. You can see lots of bubbles leaving the water. The blowers that are in the above pictured pump and blower house each have a 10,000hp motor using 13kv. They have to contact ComEd before they turn one on because it will run at 60-80,000hp for 15-20 seconds as it spins up the blower. "It does dim the lights." 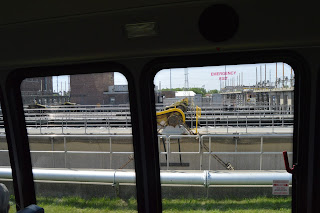 A side view that shows the tops of the conveyors. By this time I learned to stand up when I had to take pictures of something on the opposite side of the bus so that there were not heads at the bottom of the picture.

Then the water flows to the Primary Settling Tanks (primary treatment).

You can see the paddles that skim the surface.

In these tanks that have been drained for maintenance, you can also see the paddles along the bottom.

Activated Sludge Aeration Tanks (secondary treatment). I believe the "activated" is the bacteria they grow in the tanks. The amount of air they need to pump in depends on the amount of bacteria that are growing. The bacteria eat a lot of the "solid human waste." The host mentioned that they were having trouble with one of their other plants because someone was dumping cyanide down the drain and that was killing their bacteria. They know when the bacteria goes down because the oxygen levels go up since no bacteria are consuming it. They did a lot of work trying to find the culprit. They finally found the source of the cyanide when the culprit divorced his wife and the wife tattled on him. The host pointed out that if you are doing something very criminal and your wife knows about it, you should probably not divorce her. Another story he told is when someone accidentally dumped a lot of vinegar down the drain. They were notified when the accident happened so they knew an issue was on its way to the plant. But they did not know what the impact would be. It turned out the oxygen levels went way down because the bacteria loved it and thrived. The host emphasized that since the 1930s, the plant does not using any chemicals, just biological processes. If you note the dates on the above construction pictures, they are in the 1930s.

(Update: I assume these are some of the the aeration tanks. Look at how the air makes the water churn.)

I could not get a side view of these tanks because they are surrounded on both sides by the next stage of treatment. 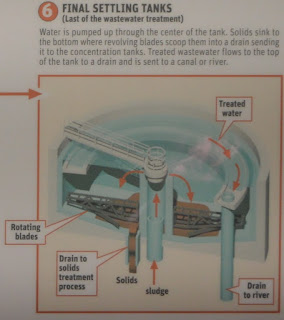 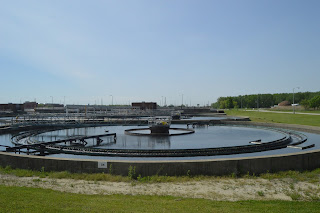 This is one of the 96 final settling tanks. You can see the trough in the middle into where the clean water flows to leave the plant. The duck on the water must agree that the water on top is clean.

Battery C was out-of-service for maintenance. That is one-fourth of their capacity. I wonder if they will have it back in service before the next round of rains hit the area.

The solids that settled out of water treatment tanks first go to Concentration Tanks. I don't remember seeing them on the bus tour. They may have been enclosed to control odor. BTW, I did not smell anything doing the entire tour. Later, when I was driving around the area, I did smell odors from the chemical plant to the east.

The solids then go to a centrifuge to remove the water. For a picture of the centrifuge plant, see the railroad post. The extracted wastewater goes to the activated sludge aeration tanks for more treatment. 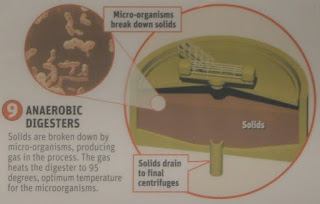 The biosolids then move to Anaerobic Digesters. Here bacteria eat the biosolids and excrete natural gas. As the video explains, they have expanded their capacity so that they can accept organic waste from other sources such as food processing plants so that they can create more gas to help them achieve their energy neutral goals.

The digesters are up on a hill, but they did not explain why they were up on a hill. The biosolids then go from the digesters to second set of centrifuges and then are dumped into the railroad cars to be dried in the field. They also have installed equipment that uses heat to dry the biosolids and forms them into pellets.

I marked the satellite image below with the following convention:


MWRD posted three photos with the comment: "Three "elevated" views of early construction and excavation at the West Side Sewage Treatment Works on May 7, 1927. The West Side Plant was placed in service in 1930 and the adjoining Southwest Plant was placed in service in 1939. The two facilities were eventually combined and renamed the Stickney Water Reclamation Plant, now one of the largest wastewater treatment plants in the world."

An MWRD posting about the emissions reductions caused by the new equipment.

MWRD has posted an updated video. The MRWD also posted that they are a partner in reducing nitrogen runoff from a farm near Argenta, IL.

MWRD posted a link to an article about the plant with the comment:
Learn about our Stickney Water Reclamation Plant, the world's largest, in this month's US Water Alliance newsletter. The Stickney WRP serves 2.3 million people in a 260-square-mile area, including the central part of Chicago and 46 suburban communities. The Stickney WRP cleans 700 million gallons of water per day, with the capacity to treat up to 1.44 billion gallons per day.

What The MWRD Has Learned About Wastewater Treatment

A video tour of Stickney


A 1:01:59 video about the MWRD's history and operation
"Content includes the history of the MWRD and how it reversed the flow of the Chicago River, which is brought to life with historical imagery from the MWRD's archives. The tour provides an in-depth look at wastewater treatment, including underwater and microscopic views of the process. Aerial drone footage captures highlights of the construction of the Tunnel and Reservoir Plan in addition to property the MWRD leases for recreational uses."
Posted by Dennis DeBruler at 6:57 AM