Our local newspaper had an article explaining that Warren Ave. in Downers Grove, IL would be closed on 8/28/17. So I checked out what was happening. This is what I saw when I arrived at 9:11am:

The backhoe with hydraulic jackhammer attachment, the dump truck hauling a trench embankment brace, and the village's Water Utility Repair Team tool truck made sense. And it implies that the scheduled work was repair or upgrade of the water supply. But why do you need a fire truck for water work? To pump out something? 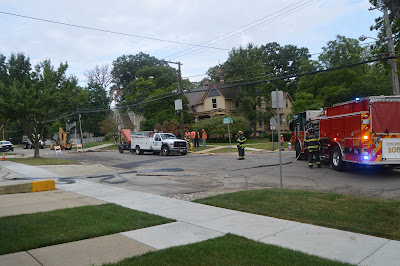 It was not to pump out something because they were hooking it up to the fire hydrant. And why are all of the construction workers just standing around?
Because there was a gas leak that was bad enough you could hear it! From the video comments: "A reality of the 21st Century is that it is easier to make a video than an audio recording. All three thumbnail choices were of the pickup truck. I wanted something from the beginning or end. If you look at the first frame, you see disturbed concrete on the other side of the tree trunk that is in the middle of the frame. That is where they were digging the hole that broke the gas main. Even at this distance, you can clearly hear the hiss of the leak. A few years ago they converted the neighborhood from low- to high-pressure gas service. There was remarkably little gas smell in the area considering how noisy the leak was. I've smelled gas in basements, and there was no sound. I guess a little breeze dissipates the smell quickly."
(new window)

The hole on the right under a driveway apron is where the leak was. It turns out the fire truck was setting up to be prepared and everybody was waiting for the gas company to send out their digging and repair equipment.

This is a screenshot from a video I took when I was leaving at 9:16. I was trying to catch the motion of the water leaking from under the truck. But you can't see the water falling from the truck. But even in a still, you can see it is putting water on the street. Note on the left, under the cab, that the yellow hose to the fire hydrant is pressurized. During a later visit, I talked to a fireman of a second truck that they had sent out to the other end of the construction zone. I asked why this truck was leaking water. He said it was because they were running the pump and water has to flow through the pump to keep it cool. Of course, when the fire houses are being used, there would be plenty of water flow. But in this case of having the truck on "hot standby," the cooling water flows out of the bottom of the truck. 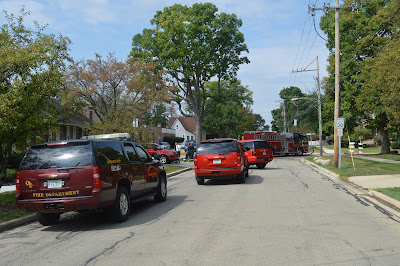 My next visit to the area was at 11:02. You could still here the hiss of the leak. The fire department had sent more people to stand around and watch. The closest SUV was labeled Battalion Chief. The three red SUVs had no labeling at all. So I asked and confirmed that they were from the fire department. Are these fire inspectors who are witnessing their first major gas leak? I remember when a house burned on our block, there were fire trucks and fire chief cars from several other suburbs parked in our block. They were just standing and watching. It finally occurred to me that so seldom does a fire consume a home that they had come to see what it was really like for themselves. That is, it was essentially a training exercise. 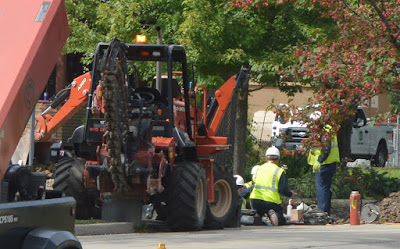 The digging equipment from the gas company had arrived, and a crew was working. 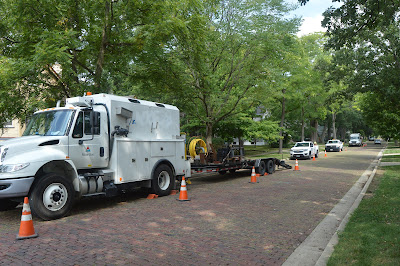 On a side street I saw four vehicles from the gas company. A digging machine obviously came on that empty trailer. 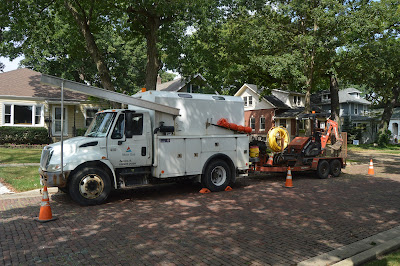 I walked down to the fourth vehicle because it still had its digging machine. Instead of rubber tires like the one they were using at the site, this XT850 had rubber tracks and was smaller. 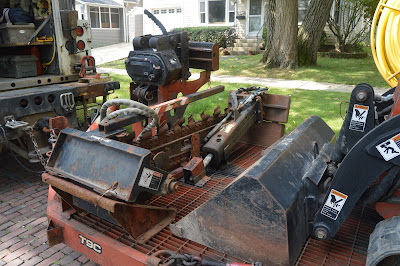 Both trailers also carried an assortment of attachments on the front part of the trailer. In this view from the street side, we see this one travels with its bucket. And we have a good view of the jackhammer. Then we can clearly see the chain of the trench digger. 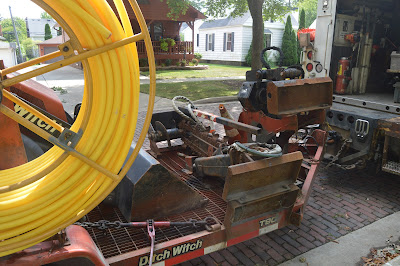 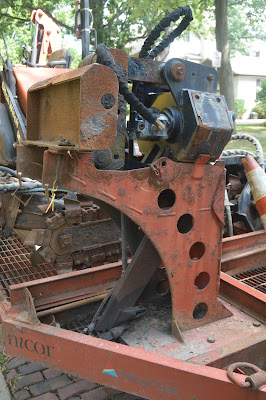 When I got back to Warren, I noticed the Battalion Chief vehicle had its lights on and was backing up to turn around.

There must be something more exciting in town to stand and watch. 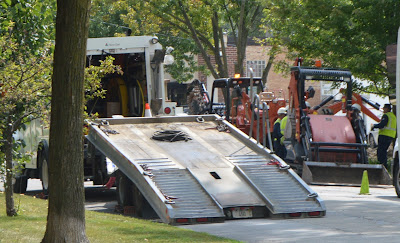 The empty trailer I had saw on the side street was probably carrying this rubber tracked unit. The trailer we see here on Warren probably carries the rubber tired unit that we saw from the other direction. It was 11:19 when I left. 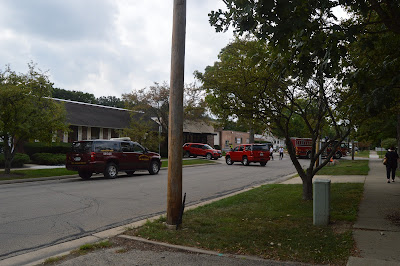 At 12:14 I visited again. This site must be back to being the most exciting place in town because the Battalion Chief is back. 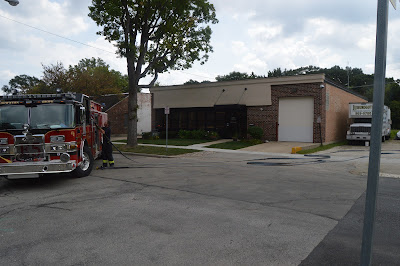 But in fact, the excitement is over and the fire truck is reeling in its hose. There is no more hissing sound. 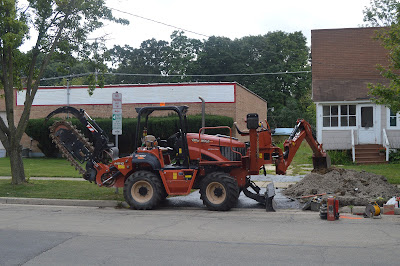 Now I can get a closeup of the rubber tired unit, Ditch Witch RT100. 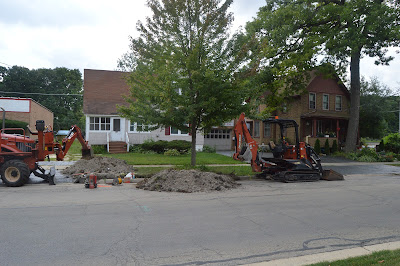 Judging by the two piles, they did use both excavators to quickly get an access trench dug a couple of houses west of the leak. 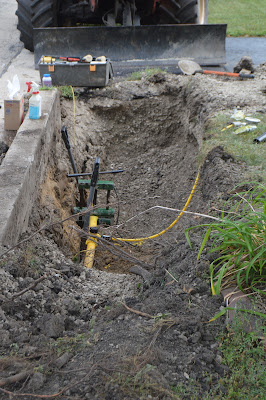 One of the advantages of the construction workers having to stand around and just watch is that they are more than willing to talk to you. During the 11:02 visit, one worker explained to me that the pipe is plastic and that they will crimp it on both sides of the leak to stop the flow to the leak. He thought the main was 8 inches, but it looks more like just a couple of inches. But we can see the big green clamp that has pinched the pipe shut. I also noticed that they tapped the pipe to a gauge. I assume it is a pressure gauge. This neighborhood is probably normally fed from the east. Now the houses and business west of the clamp have to be fed from the west. They are probably measuring that the western supply that they are now using has enough capacity to maintain a proper pressure in a pipe that is a lot further away than the western service area was designed for. 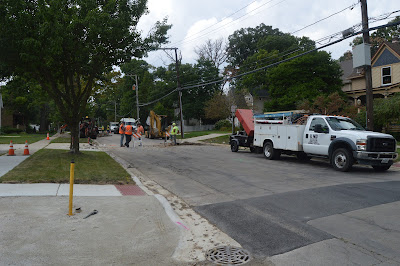 Probably the reason we saw a digger left on its trailer is that on the east side there was a valve and all they had to do was turn it off. Note on the left between the yellow pole and the pipe wrench is a cover that would normally cover the access pipe that the pole is in. To the left of the orange-vested workers is where the leak is. And in the background is where they dug the trench to crimp the pipe. I learned later that the two people walking away down the middle of the street in the far background were part of the accident investigation tream.

An accident investigation team explains why I saw so many USIC trucks in the area. In addition to these two, I saw some on the side streets.

It also explains why the gas company has yet to repair the leak. The accident investigators want the scene of the accident left undisturbed until they are done with their interviews, etc. In fact, someone took down my name. If I remember correctly, she used the word "witness."

During my fourth visit (2:09), they were actively repairing the gas main. 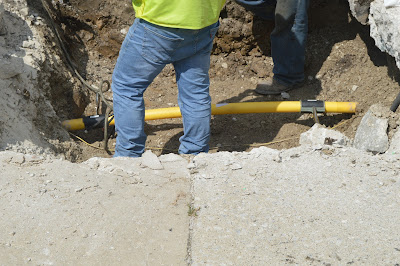 Just a couple of minutes later, they are close to done. 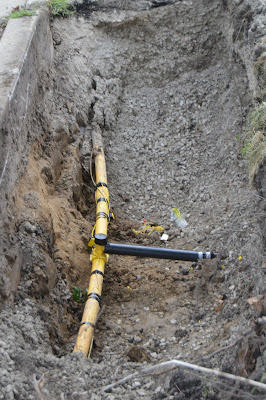 During my last visit (3:02), the gas company will be shoving the dirt back into the "clamp" trench in just a few more minutes. They have taped an electrical wire to the pipe in many places so that it won't be disturbed by the back fill operation. I'm guessing the black pipe is some sort of bracing to help hold the tap and pipe in place when they shove the dirt back in. 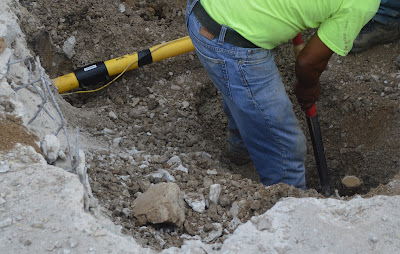 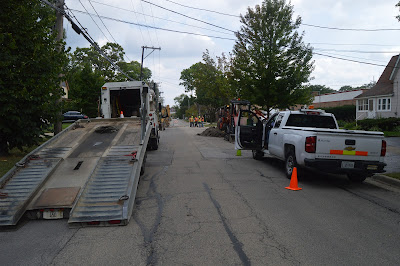 During my third visit, at 12:23, I happened to be on the west end of the construction site when I heard a train coming. By luck, I was in the one place on Warren Avenue where you can see the tracks from the street. 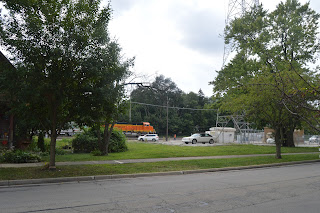 It was a freight locomotive pulling passenger cars. Since this is very unusual, I took a rapid sequence of photos to try to catch all of the cars in the small window of visibility that I had across the BNSF railyard. When I finally saw the theater car at the end, I realized it was a rather long OCS (Office Car Special) train. The following are cropped versions of the photos I took. Looking at the windows at the end of the last car, they don't have the stair step arrangement that a theater car would have. And I see that the car is domed. So it must have been an old dome car that has been converted into a fancy observation car.

Posted by Dennis DeBruler at 12:13 AM