The satellite view of the dam is obscured by trees.

As did many other interurban lines, The Chicago & Joliet Electric Railway Company built Dellwood Park (201+ photos) to promote ridership on the line during the weekends. It opened July 4, 1905. It was common for a company to sponsor a picnic for their employees in this park. In addition to an amusement park, a grandstand that held 5,000 spectators for events such as baseball games and sulky races, and a scenic railroad; they built a dam to create a lake for swimming and boating in the summer and for ice skating in the winter [patch and LockportHistory] Dellwood is now a regular park with playground equipment, baseball diamonds, pavilions and parking lots.
It had two dams. [Herald-News] I wonder where the second one was. The dam in these historical views is easy to find because it still stands. But holes have been cut through it so that it now acts as a storm surge basin.

I had really bad glare off the sign and other problems with my first set of photos, so when I did a trip to check out high river levels, I included a stop at this dam.

This is the same photo that is on page 164 of JOLIET Transportation & Industry A PICTORIAL HISTORY by Robert E. Sterling. Robert explains "Alighting from streetcars, visitors entered the park through a tunnel under the dam and ascended a flight of stairs adjacent to the boathouse." So the sidewalk in the foreground (south side) extended to the left to the streetcar line.

The text on the sign about this photo is:


Visitors to Dellwodd Park, as shown in this early 1900s scene, were greeted by the spectacular panorama of a man-made lagoon, waterfall, and boathouse. Walks led to other amusements, over bridges and along limestone bluffs.

As many as 10,000 people came here on summer weekends, day and evening, with boating and dancing being the popular attractions. The dance pavilion could accommodate 700 couples and attracted famous bands. Societies and clubs also held social events in the park. 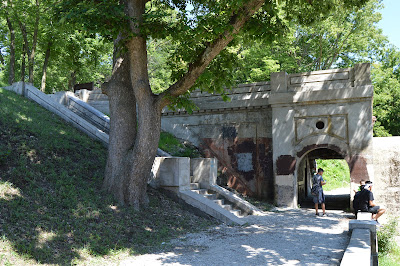 The rectangle hole on the far side has been cut in the dam because this is now part of a trail. I walked under that "tower" and turned right... 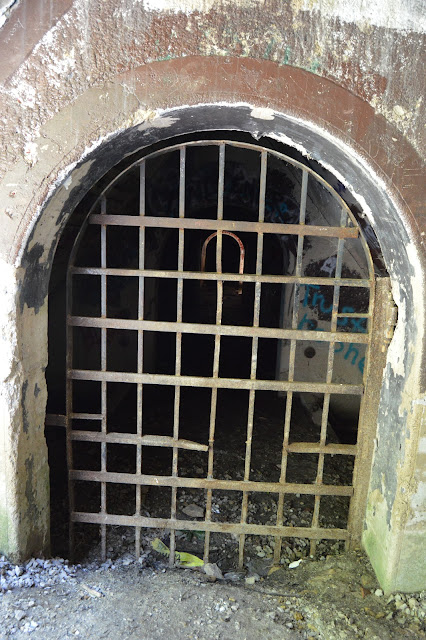 ...to take a picture of the tunnel through the dam. Either there is a lot more fill on the floor than there was in the early 1900s, or that would have been kind of creepy to walk through because people were not that short. I believe the top is below my eye level, and I'm just 5'10".
Now I'll do a more systematic tour of the dam and lower trail. 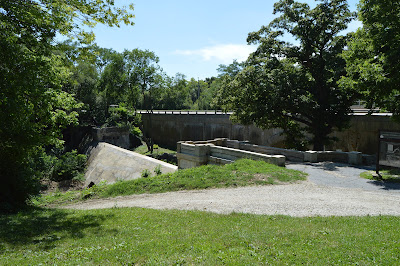 This is the view as you approach from the park's parking lot. 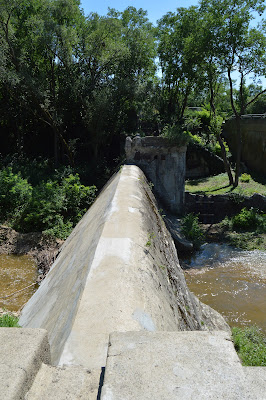 I wanted to get a shot of the crest to show they had an intuitive sense of an ogee crest, but its curve was sharper than a modern ogee crest. 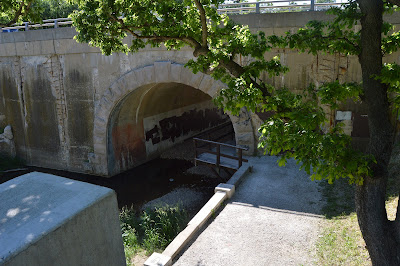 A wood bridge has been built to take the trail under IL-171. (This picture is from the low flow day.) 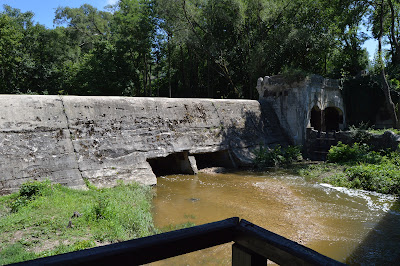 While standing on the bridge, I took basically the same shot of the dam breech as I have above. Not only was the water level higher, it was flowing a lot faster. I made a video to capture the river flow. 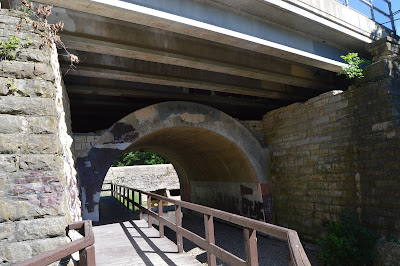 On the other side of IL-171. It looks like the current bridge spans over the old bridge abutments. (low flow) 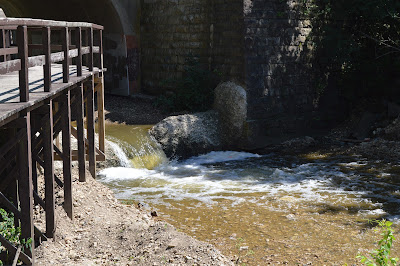 I walked further down the bridge on the downstream side and then took another video to capture the flow. The culverts at the end of the video are under the CN/GM&O/Alton tracks. 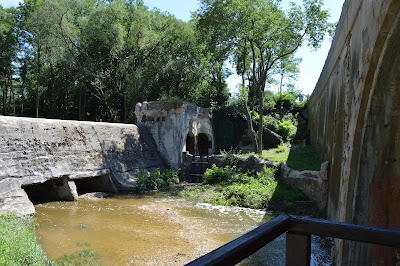 I took this photo to document why I did not take any photos from the south side like all of the historical pictures do. There is a chain link fence over there and nature has claimed a lot of that side.
Update:


Robert Sterling posted a video with the comment:
A short video of an EJ&E picnic at Dellwood Park in Lockport to warm you up on a very cold day. Like many companies back then, the "J" had an annual picnic for its employees every summer. This video from the 1927 picnic is just a short clip from a much longer film made by a professional company hired by the "J" to record the event.
[Can you imagine wearing a coat and tie to a picnic today?]