When I learned that Wyoming Powder Basin coal was shipped to power plants on the St. Clair River via Lakers, I was not sure where the coal dock was in the Duluth+Superior harbor area. This picture and its caption answers my question. 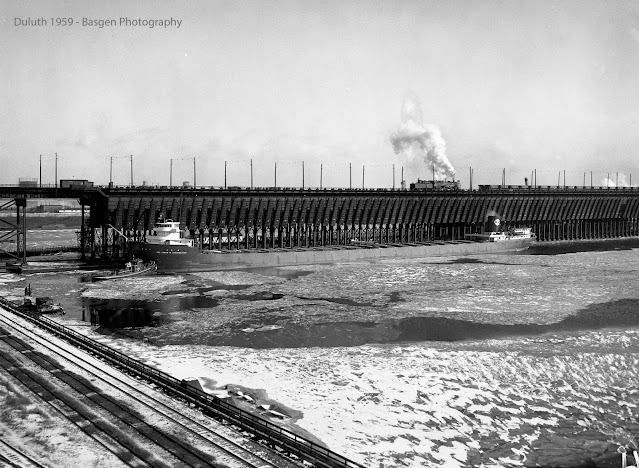 David Schauer posted
A flashback to 1959 from the Basgen files of the Col. James M. Schoonmaker at DM&IR Dock 6. An unidentified Great Lakes Towing tug is assisting. Basgen Photography

James Torgeson shared
The Str. Col. James M. Schoonmaker of the Shenango Furnace fleet loads ore in Duluth in 1959. She survives as a museum ship on the Maumee River in Toledo, OH.

This video taught me that the vertical things in the front part of the dock are conveyors instead of chutes.


The coal loading dock with the grain elevators in the background.

The CN/Duluth, Missabe & Iron Range ore loading dock with ore storage piles. (Update: Dock 5 describes the now abandoned dock that is next to the active Dock 6.)


The Interstate does provide some interesting views of the docks.

Judging from images from Google Earth, it burned between Sep 2006 and Sep 2008. I include a Dec 2005 image because it is better.


Or is it these elevators that are being "mined" for wood.

In 1888, this harbor also had the world's largest grain elevator. It was being disassembled to salvage its old-growth wood when it burned Dec 17, 2018.

Unfortunately, I don't have the time to find where this is in Duluth.

Photos of Dock 6 and the coal/limestone docks
14 boats caught in up to 30' of ice on June 6, 1917
Photos of S/S Arthur M. Anderson unloading limestone and then loading ore

Posted by Dennis DeBruler at 6:51 PM