If a view is looking upstream, then we generally see some of the bridges over the St. Marys River.

A time-lapse video from a boat going upbound (source).

A time-lapse video of Michipicoten locking downbound with H Lee White leaving the Poe Lock in the background..
June 8, 2022:
Ric Mixter's Wrecknology posted four images with the comment: "2022 is scheduled to bring huge changes to the old Sabin Lock (opened 1919 closed 1989). The old cement walls will be blasted out and rock will be placed in the decommissioned Davis lock, eventually filling it in. Here are some pictures of the Sabin and Davis locks then and now."
Andrew Haenish shared

Steve Vanden Bosch posted three photos with the comment: "These photos are from the Library of Congress of the Locks with one photo showing the whaleback barge 130 being towed out of the Poe Lock downbound."

I'm saving a satellite image since it is supposed to change because the second big lock has finally got some funding.

Since 1986, the Davis and Sabin Locks are supposed to be replaced by one lock that is big enough to handle lakers. They broke ground on June 30, 2009. But it hasn't been funded. (Buying a spade for ground breaking is a lot cheaper than actually building the thing.)

The replacement of the two unused locks by a $580 million second "laker" lock is on a list of 40 potential U.S. infrastructure "megaprojects." I expected a lot of iron ore and grain to be shipped through the locks, but I was surprised that coal is also shipped. It turns out it is coal from the Wyoming Basin that is transloaded to boats on the west end of Lake Superior. 70% of the freight through the Soo Locks uses the Poe lock.

The last ship through the locks in 2019 was on January 15.
It takes 22 million gallons to raise a ship 21 feet, but 73.3 million gallons have to be pumped out to do winter maintenance. (There are several more photos in this reference that I did not copy including some hard-hat diving to open valves on the floor.) [mlive]

First, they have to build a pile of "stop logs" so the gates can also be dry for maintenance. Each log weighs 49 tons.
Crane Barge Harvey will go down and rest on the bottom of the lock when the water is removed.
After 17 hours of pumping, the lock is ready for inspection.
Two of several photos from mlive showing how they used an industrial vacuum cleaner to clean the muck out of the culverts. I don't know for sure if these are the same culverts. There is a culvert on each side of the lock and they can move a million gallons of water a minute. They are big enough that you can drive a truck through them. Photos courtesy of the U.S. Army Corps of Engineers, Detroit District 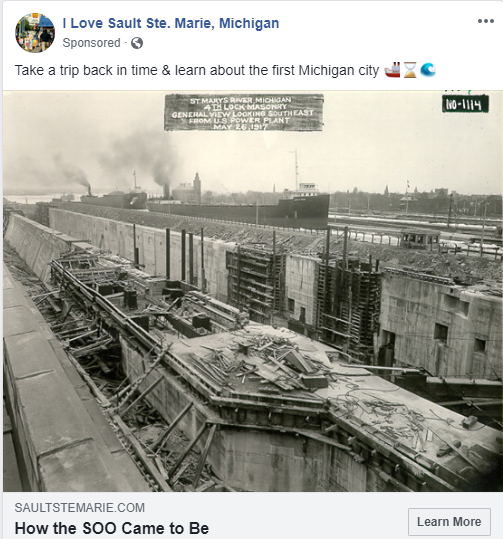 This photo of Soo Locks is courtesy of TripAdvisor
[If you click the photo on their site, you can navigate through some more historic photos of the locks.]

USACE, Detroit posted fourteen photos with the comment: "When the last freighter of the 2019 navigation season cleared the Poe Lock on January 15, crews at the Soo Locks immediately began working to dewater the Poe Lock to prepare for a busy maintenance season.  #SooLocks  #WinterMaintenance  #USACE"
Ben Stalvey shared with the comment: "One sweet looking MLC 300."
[mlive also has a copy of these USACE photos and captions. But my copy is ad free. The mlive article does have some background information in its intro.]

A video of "Three footers in the Soo Harbor, Mesabi Miner, Paul R Tregurtha, Edgar B Speer on a beautiful summer day. Viewed from the Tower of History. 6-8-18"

A video of "Wilfred Sykes being lowered in the MacArthur Lock then leaving. 7-17-18
Time Lapse Video." There is also a sliver of a CSL boat entering the adjacent lock.

New Soo Lock that could employ thousands in Michigan pushes forward
New Soo Lock economic validation study complete, I wonder how many times these locks have been studied to no avail. The problem is that the studies themselves cost money.

State of the locks

Army Corps of Engineers budgets $75 million toward Soo Locks upgrade  $75m struck me as a drop in the bucket (lock?). But a step is better than no steps since 1986 when the new lock was authorized. "If Congress appropriated the requested $75.3 million for the project next fiscal year, it would keep the project on track for completion seven to 10 years from whenever construction starts, said Lt. Col. Greg Turner, district engineer for the Army Corps' Detroit District."


The U.S. Army Corps of Engineers is proposing a second full-size lock for the complex at Sault Ste. Marie. It would cost about $1 billion. Officials say the proposed 2020 funding would pay to begin construction of upstream approach walls, continue design of the lock chamber and finish upstream channel deepening. Lt. Col. Greg Turner says it would keep the project on track for completion in seven to 10 years. [ClickOnDetroit]


I picked this screenshot of the time-lapse of it going through the lock because it catches some of the construction activity on the new lock.
I've never seen a lock bone dry before.
4 photos of the bridge from a towboat
A profile view video of the span going down (shared)
USACE posted 21 photos showing how they dewater the Poe Lock (2022 repairs). Pat Cameron shared.
0:39 video of interior of empty Poe Lock
19 photos showing how they repaired the concrete under the northern lower gate
"Each leaf of the lower operating gates is 63 feet wide, 60 feet high and weighs about 225 tons."
They used three 200-ton hydraulic jacks and oak timbers to raise the leaf to make room for the repair.
17 more photos showing the sill repair in 2022
Posted by Dennis DeBruler at 9:05 PM