I remember having teeth drilled with a contraption like this.

This post motivated me to find a couple of photos that I took when we visited the Centralia Area Historical Society. The second photo shows that the part that appears to go up from the end of the horizontal arm is actually mounted on the wall.
Note that they have another belt-driven drill hanging from the ceiling. 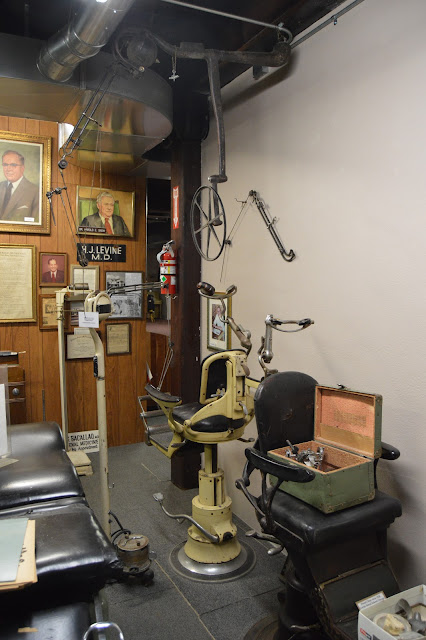 Zooming in on the first photo you can see there are two pulleys at each joint that help guide the belt (more like a rope) from the motor on the stand to the shaft of the drill bit. I thought there was a 90-degree turn on the end of the drill shaft, which I don't see in this photo. Note the bracket along the top side of the photo on the wall. Normally the drill would be stored with the end hooked over this bracket like the one shown hanging from the ceiling. I don't know what the big wheel hanging from the ceiling was for.

Today's drill uses an air turbine with a water spray. I've asked my dentist, and he told me that the drill bit turns at 400,000 rpm. He also explained that it is very low torque and will stop if it hits flesh such as your gums. He demonstrated by touching his hand with the drill. I still don't understand how it can have enough torque to drill a tooth, but I didn't push the issue.

The old drills were a lot slower at 20,000 rpm. But that was fast enough to create heat. I never had Novocaine as a kid so I learned it was the generated heat that caused the pain. Some comments on Lou's post reminded me that sometimes you could smell the "burning tooth." Imagine the heat generated with 400,000 rpm. That is why they added the water spray. And the water spray is what probably caused the development of vacuum suction. I recently had a tooth done without Novocaine, and the cooling done by the water did seem to reduce the pain. But I am still very glad when the dentist is done drilling.

Because of the slower spped, it took a lot longer with the old drills to prepare a tooth for the filling. That makes another difference in terms of feeling pain. The longer you have to suffer pain, the more pain you perceive.

And the fillings had mercury in them, which is now known as a heavy metal that is toxic.

Posted by Dennis DeBruler at 12:03 AM