The Cal-Sag Channel was widened in 1911-22 to 60' to reverse the flow of the various Calumet Rivers in Southeast Chicago. It was widened again in the 1960s to improve navigation. Since it was dug across swamps, the water tended to stagnate.


Stagnate water looses its dissolved oxygen content and then the wrong things grow in the channel. After extensive research, the MWRD built five SEPA stations along the calumet system to add oxygen to the water.


In terms of the wrong things growing, not only do the fish die, blue-green algae, which is toxic, can thrive in stagnant water. In 2014 I visited Morris, IL, as part of a trip to check out the Illinois & Michigan Canal. The good news is that the canal is watered in that town. They have a lot of signs and displays that celebrate the town's canal heritage such as the Canalport Park. The bad news is that the water was stagnant and growing a lot algae.

By the time I got to the railroad bridge that has been converted to a trail bridge, there was a solid mat of algae on the canal. 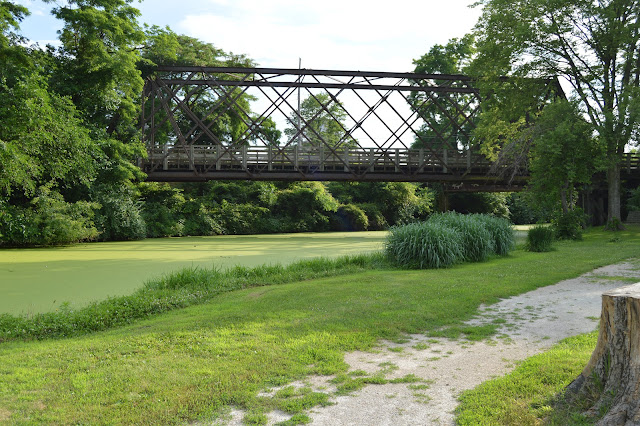 When I went on the bridge, I could not help but notice that the canal STUNK. This photo taken from the bridge shows that mold was growing on the algae. 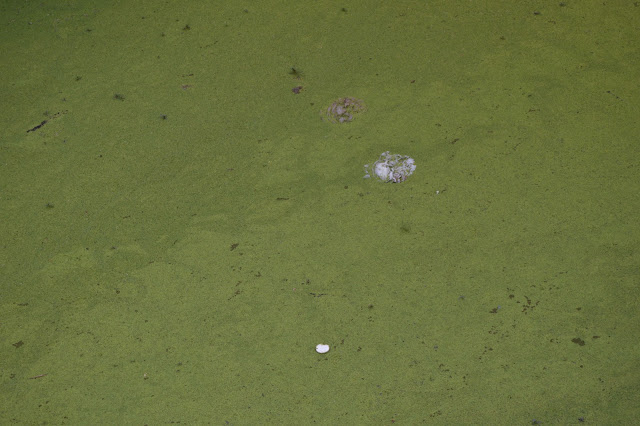 I learned just last week that this scum is probably blue-green algae and that it is toxic! It can kill dogs even if they just swim in the water. Given all of the money the sanitary district spends maintaining and operating Wastewater Treatment Plants to keep bacteria and stuff out of our waterways, they certainly don't want to be growing toxic algae in them. So they pump water to the top of a cascade of little, turbulent waterfalls to emulate the aeration action of rapids in a river.

They need to turn on the pumps! It has become part of the problem rather than part of the solution.

This one is documented as not accessible to the public.

How it works
When the upstream water meets the station, it passes through coarse bar screens inclined on 20-degree angles before drifting into the pumping process. All stations rely on large spiral screw pumps, except for the SEPA 1, which uses vertical propeller pumps. The screw pumps, several feet in diameter, spiral the water up a 30-degree incline, elevating the water as high as 17 feet. All stations, except for the smaller SEPA 2, will pump water at least 400 cubic feet per second (CFS) with SEPA 5 pumping as high as 576 CFS. The aeration during the pumping process is so strong that it in fact generates more oxygen than the waterfalls. The circular screw pumps upward rotation turns the water into something more resembling white water ascending from a rapid. Each of the screw pumps at SEPA stations 3,4 and 5 can pump more than 50,000 gallons of water per minute, while the smaller SEPA 2 will pump 19,300 gallons per minute. There are four at SEPA stations 3 and 4, while SEPA 5 has five pumps. The water then passes through a lengthy discharge channel before cascading down a series of waterfalls and returning to the waterway. During the winter, MWRD workers maintain the stations by inspecting gears, rotating pumps, replacing seals and changing oil to ensure that the pumps are ready to go come April and that the water can flow.
[MWRD-legacy]

So sometimes the oldest solution is still the best solution. The screw pump creates a lot of surface area between air and water. And it evidently splashes the water around a lot. Normally engineers try to minimize turbulence in a pump. But in this application, they want turbulence because that helps mix air (oxygen) into the water.

Posted by Dennis DeBruler at 6:00 PM