When I searched the web trying to find why the trains through Downers Grove run slower than I remember them running, I found Chasing trains Part I - Slow times at Forest Ave. Mike's discussion about the old and new signals caught me by surprise. I live just a few blocks from this crossing, and yet I was unaware that Burlington was upgrading their signals. So I went to see for myself.

This signaling upgrade from analog to digital control is part of the Federal requirement that many railroads have Positive Train Control working by 2015.


A shot looking west from the Main street crossing. The microwave tower on the right is the one where the turntable used to be. The brick building on the left was the first floor of the signalling tower that used to control the crossovers into the commuter yard to the right. It still housed the control equipment for the old signals. It and the old signal bridge will be removed.


The above was taken from Main street with a 55mm focal length and cropped. The following was taken from Forest with an 18mm focal length. I was aware that telephoto lenses compress the distance between objects. Now I see how a wide angle adds distance between objects. And it is interesting how much the relative position of the microwave tower moves.

Mike has photos of the old signalling bridge west of Forest with the searchlight heads still on it. Note the big gap under the bridge on the left. This is where a spur went to team tracks and industries near downtown. Look for "Freight Tracks," "Yards," and "Interlock" in Old Railroad Pictures for details. The crossovers and turnouts for the yard and the industrial spur is why three signal heads were needed for each track. Now there is just a turnout into a remnant of the yard. That is why the new signals have two heads over just the rightmost (M1) track. 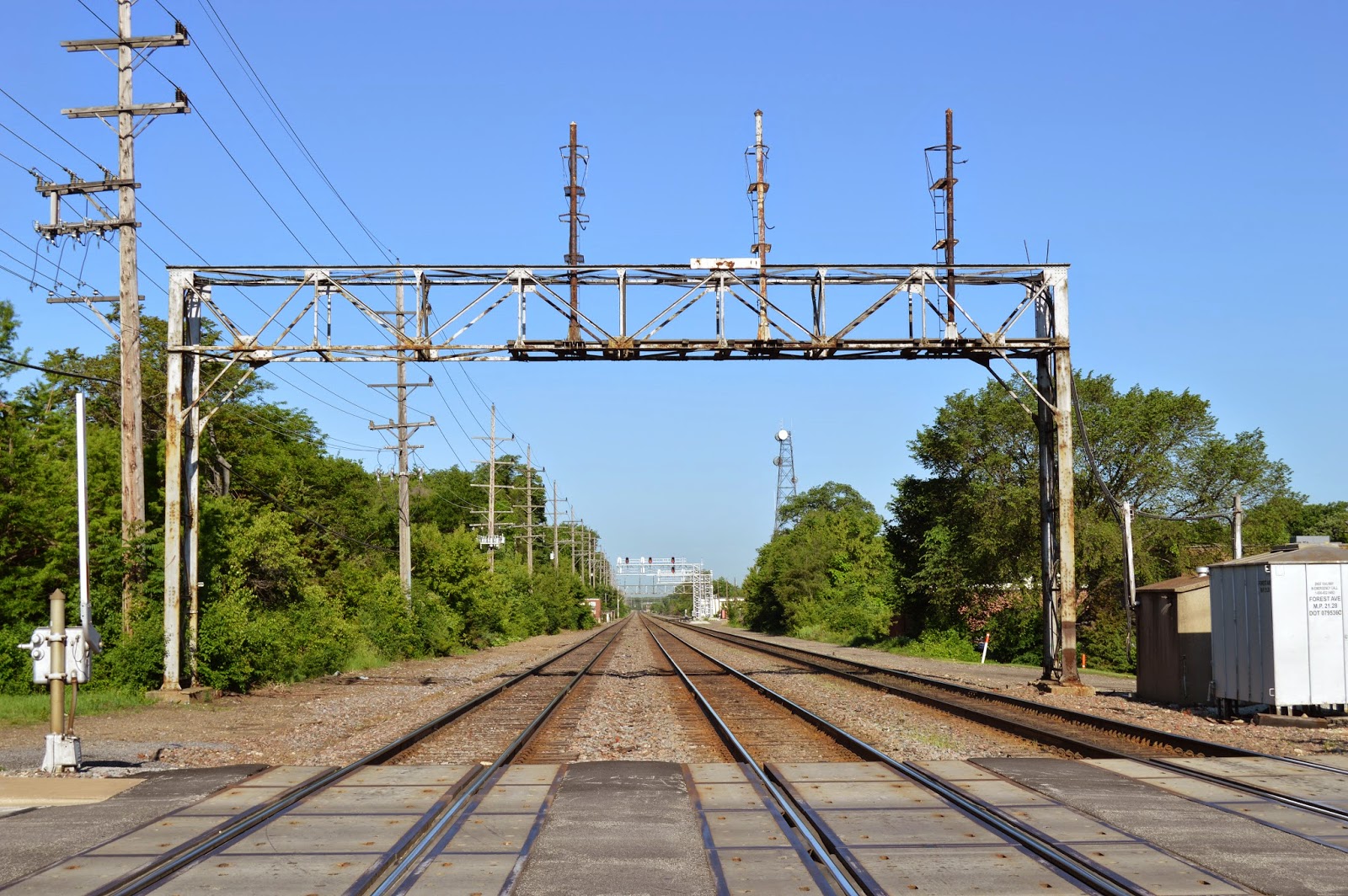 A close up of the new bridges. I was surprised how "wavy" the tracks look in this view. Amtrak trains and express commuters use this track, and it is supposed to support 70mph trains. 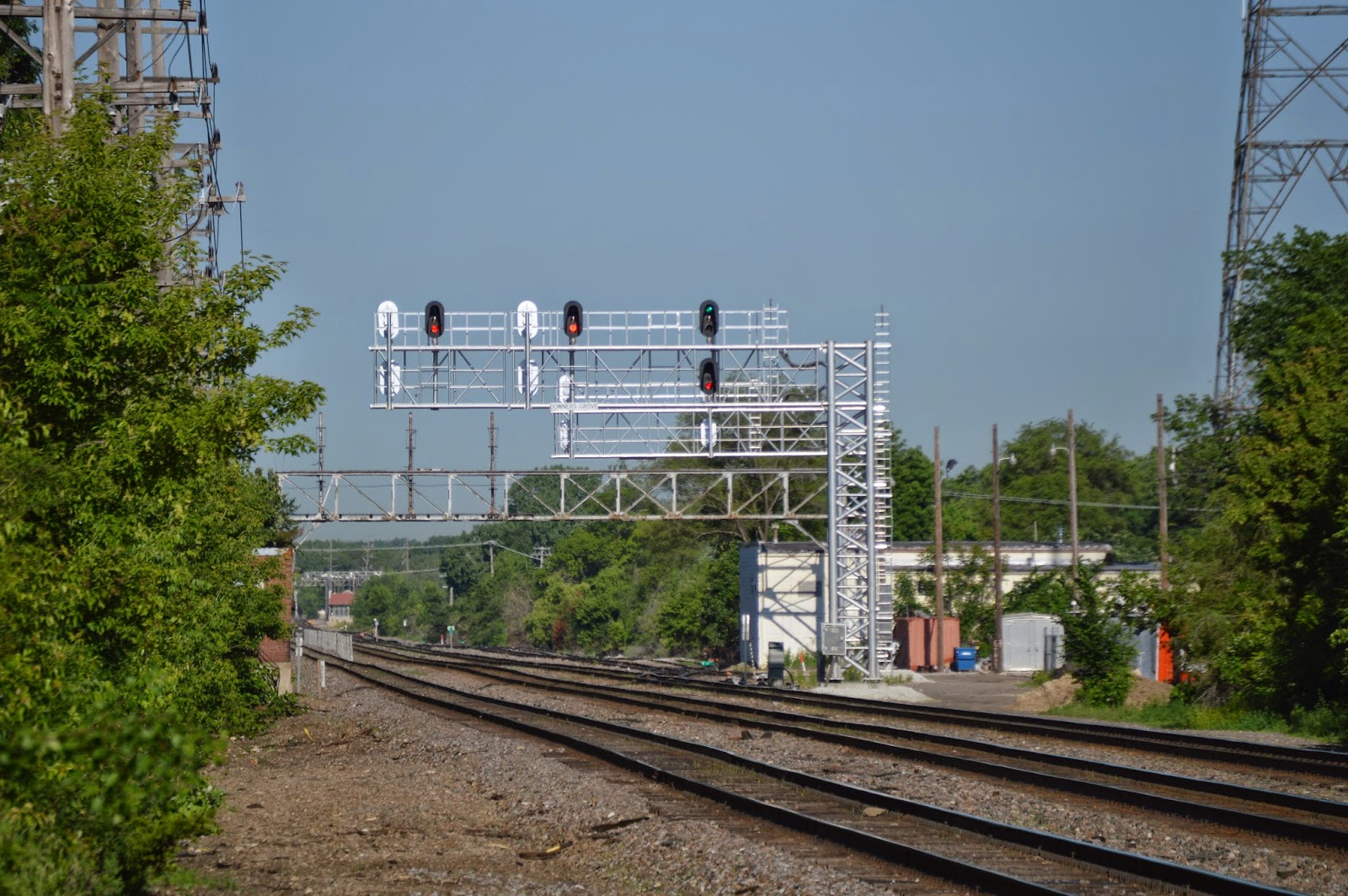 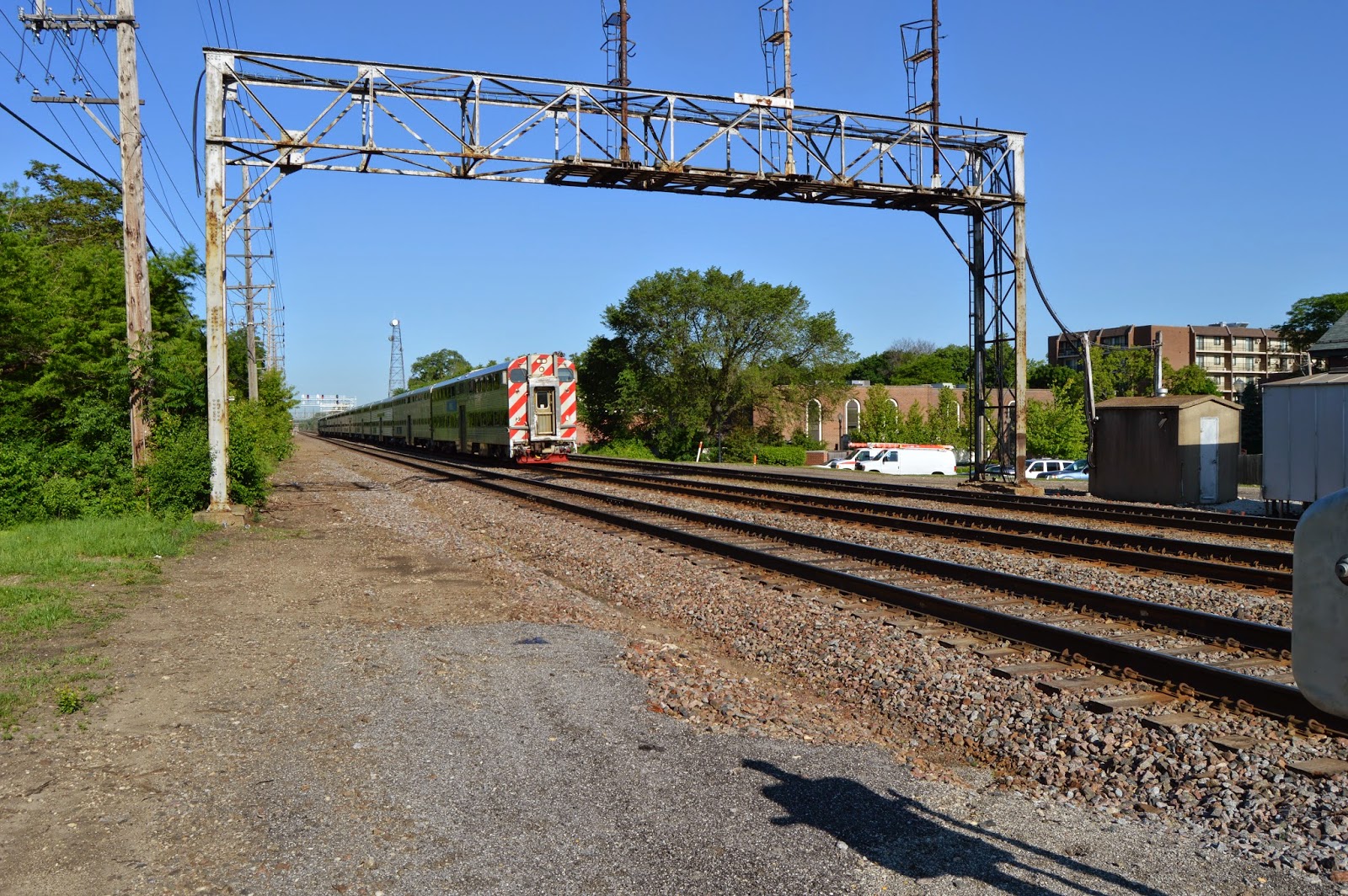 I walked west on Walnut Avenue to get a closeup of the two towers. The first bridge does all three westbound tracks and the two southern eastbound tracks. I learned from Mike's post that the center track is M2 and the south track is M3. 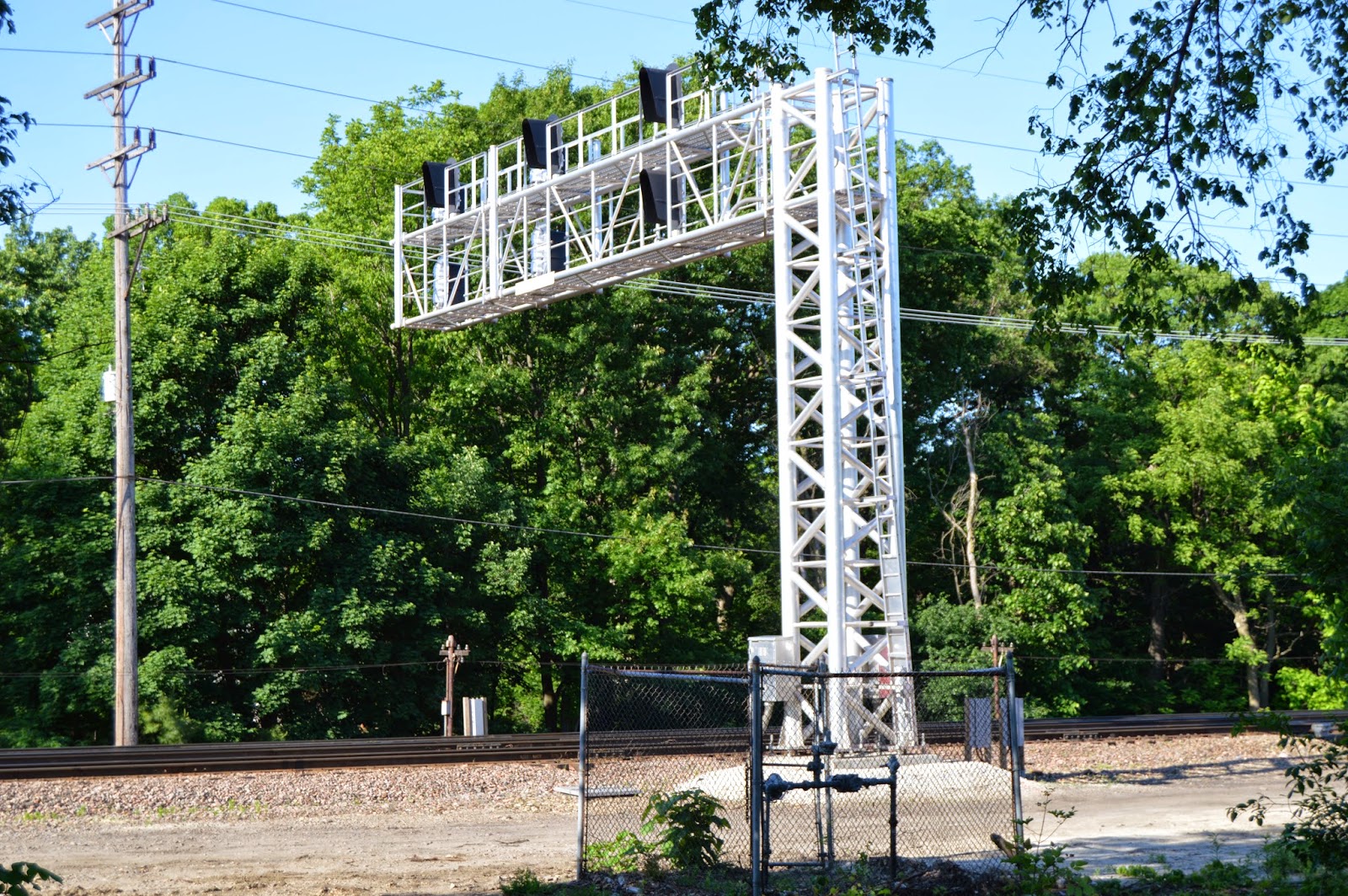 The second tower signals eastbound for a siding and M1. 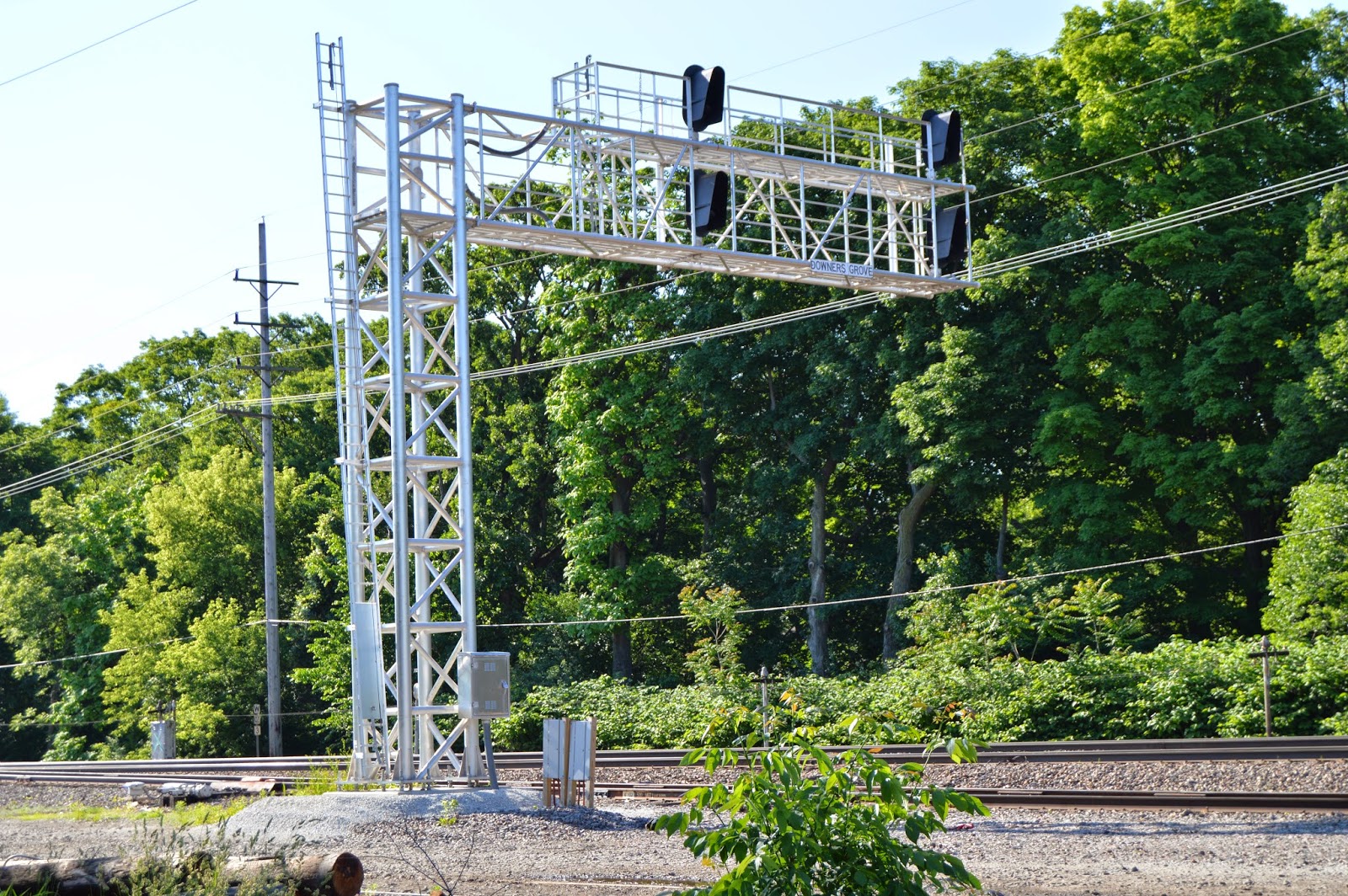 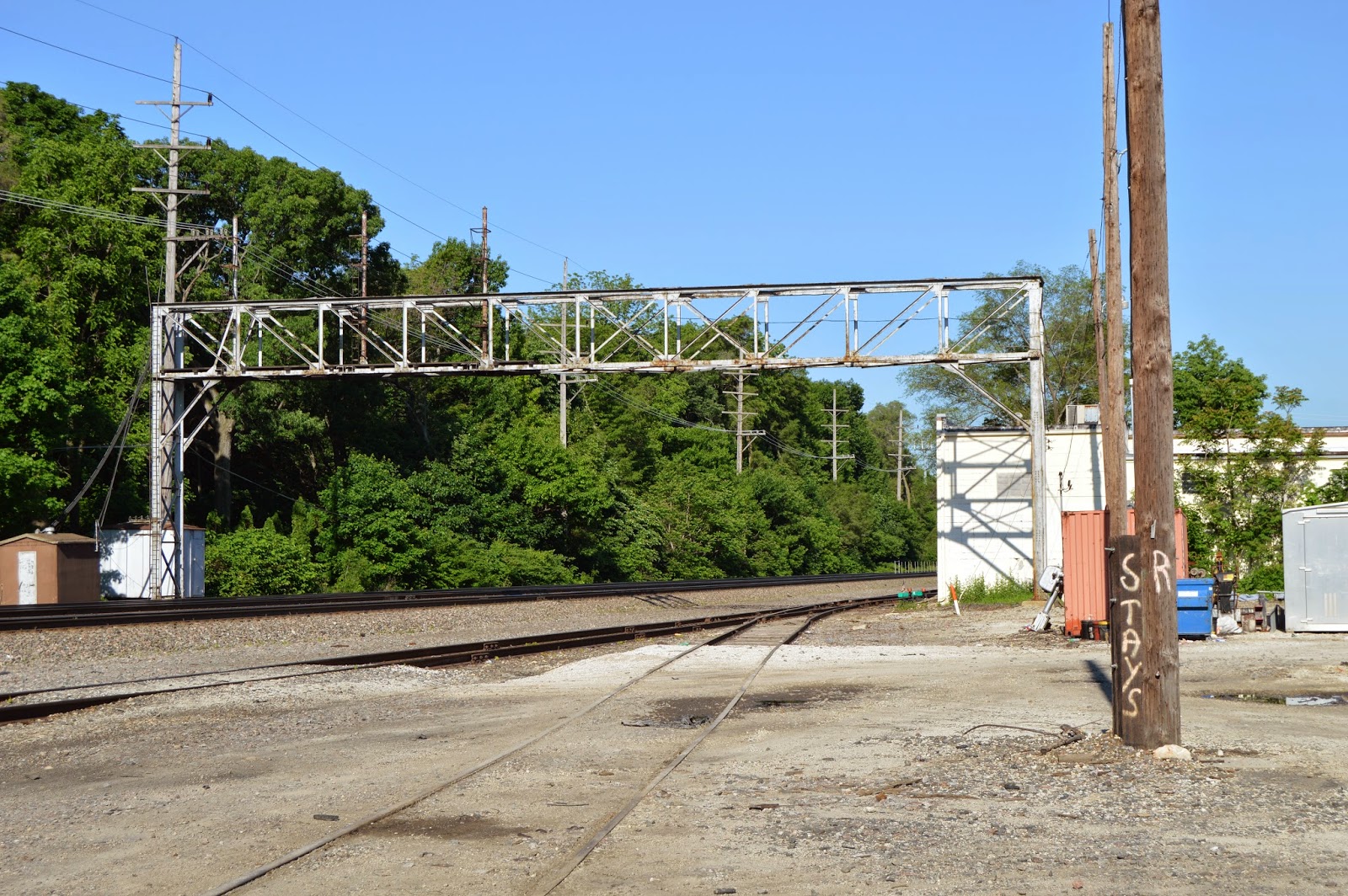 I include this overview of the two new towers because the siding on the left is where the tie-cutting maintenance train was parked a few days ago. 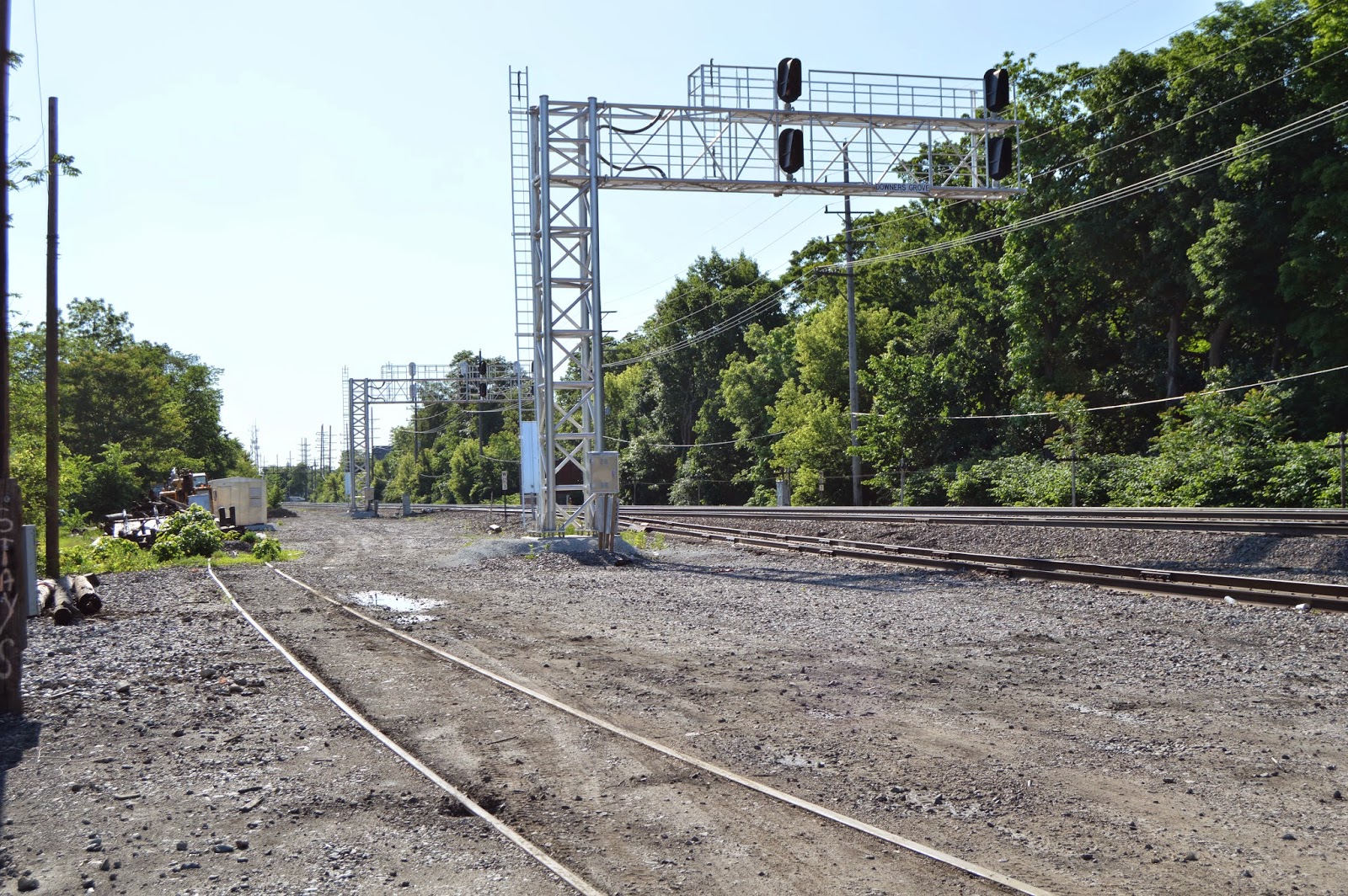 On my walk back home from this maintenance yard, I passed Prince Pond. In the spirit of "hidden nature neighborhoods", I include it. 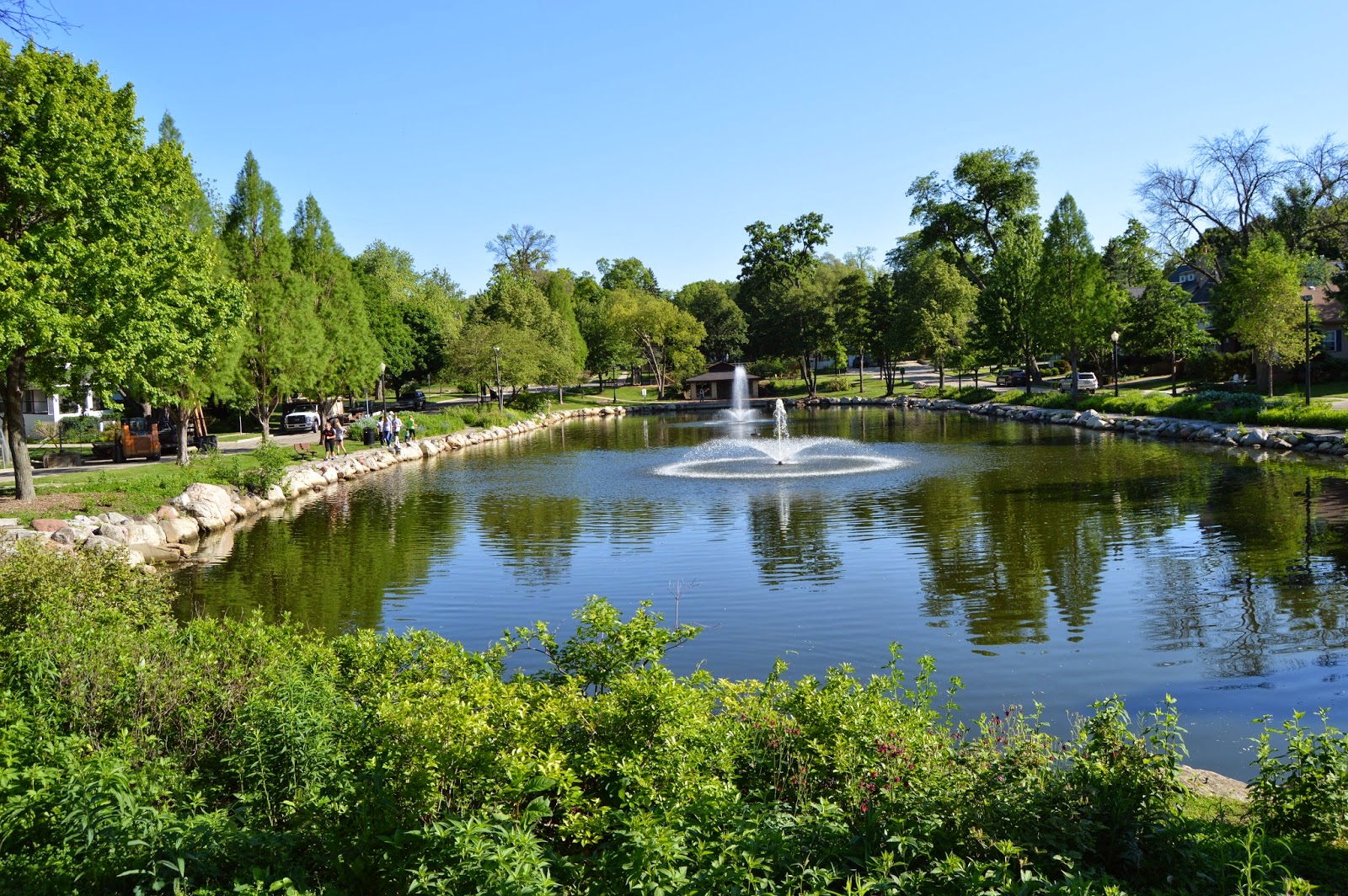 I see they now have two fountains to aerate the water to control the algae growth.

Removal of the old signaling wires

On my way back from the Oak Street bridge trip I took 55th street. I have been through Clarendon Hills many times, but I have not seen its business district because I take either Ogden, 55th, or Chicago through that town. When I was stopped by a light at Holmes Avenue, I noticed a sign indicating that if I turned right I would go to the business district. So I did. And as soon as I got across the tracks, I turned left on Burlington Avenue because I had never been down that stretch. As I came around a little lake, I saw MoW workers so I turned right on Arthur Avenue so that I could park. When I saw that they were removing the signaling lines, I got out to take pictures. I'm glad I caught the lines because I now notice that they are already gone in Downers Grove. 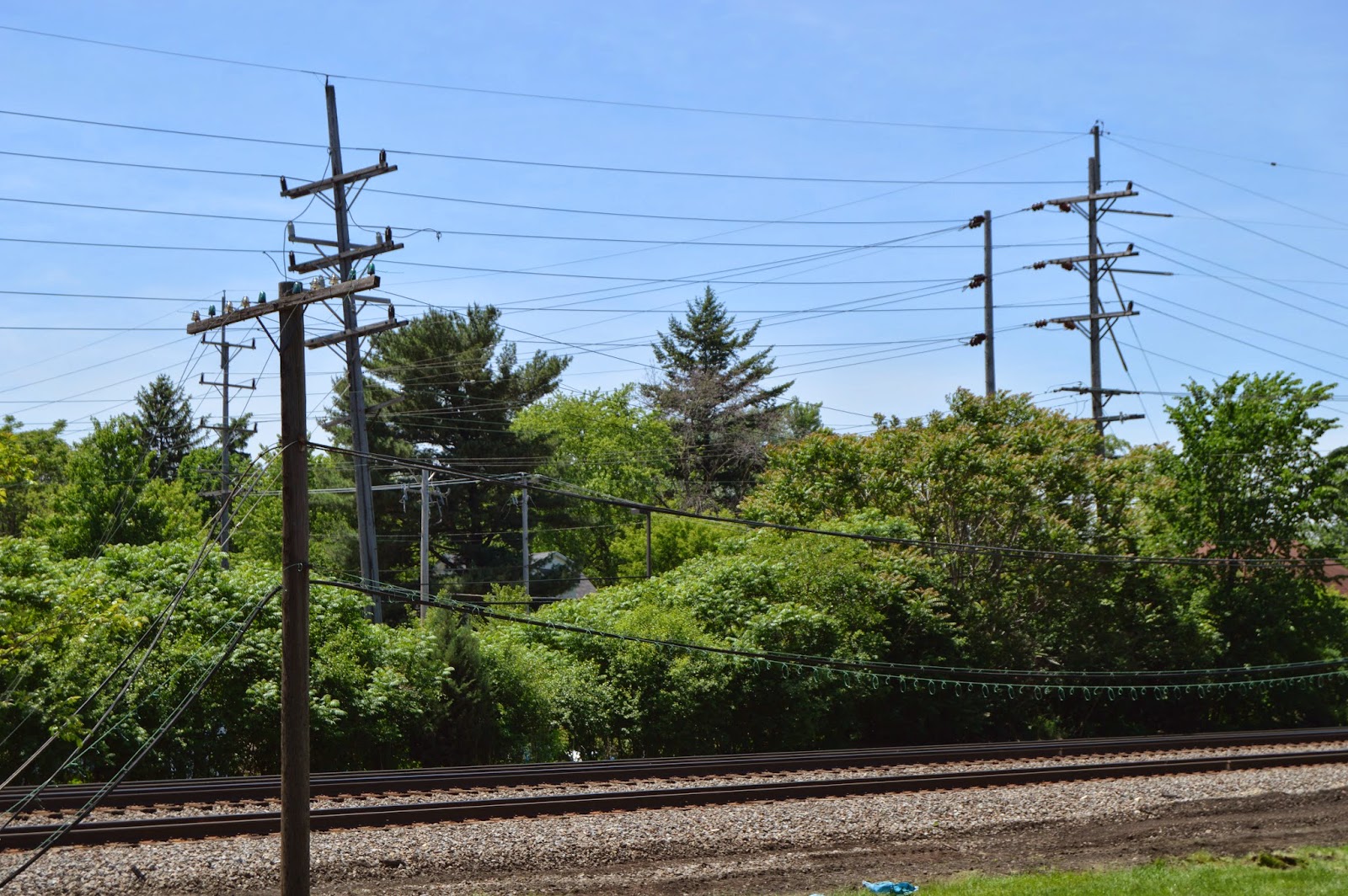 The guy driving the tractor did stop it to ask me why I was taking pictures. 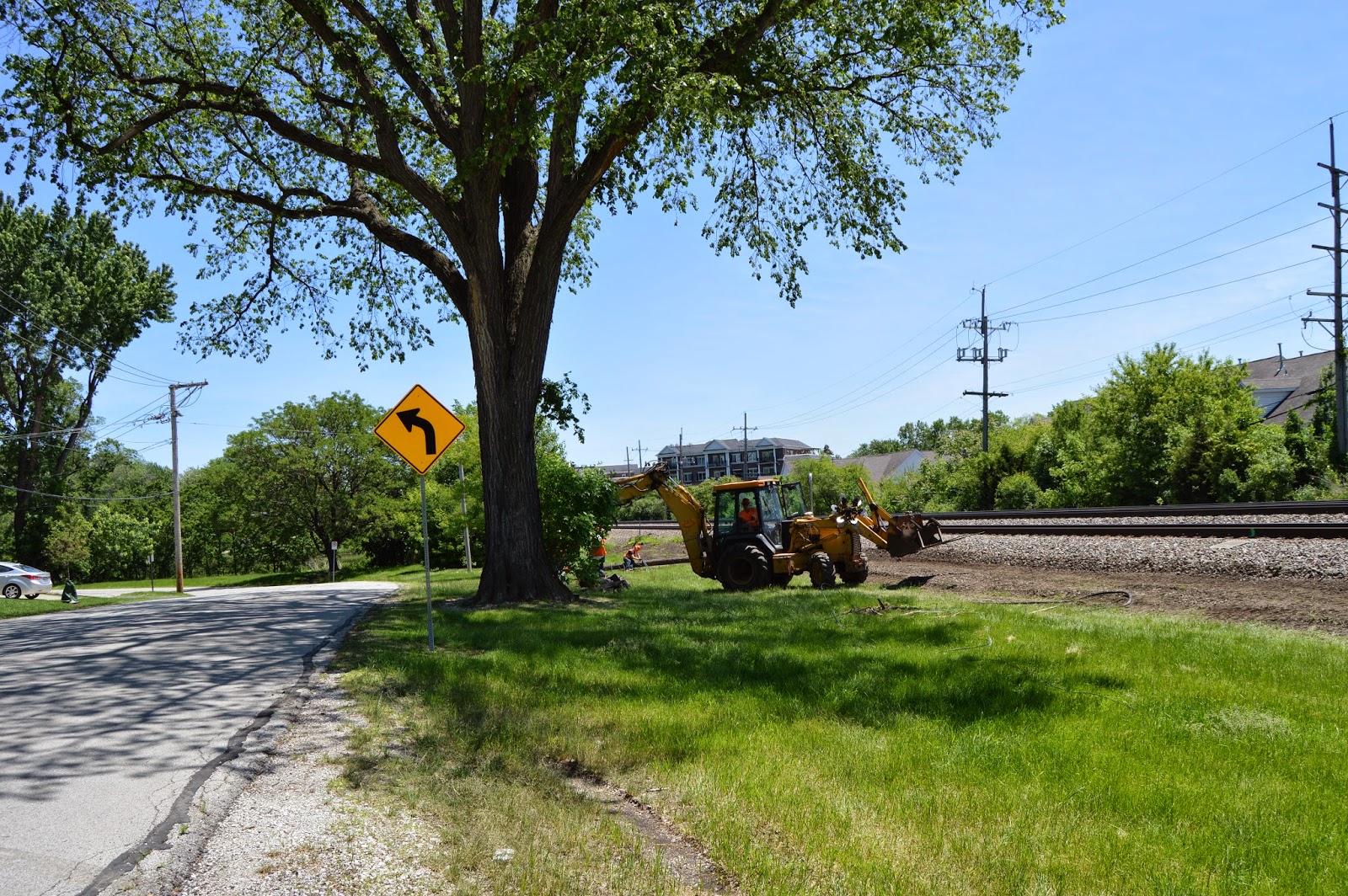 I said that it looked like if I wanted pictures of signaling lines that it was "last call". He agreed because the old signaling equipment was being removed. I asked him if the new equipment used fiber optics. He said that and microwaves. And he went back to work, and I took more pictures.

Later, at the Washington crossing in Downers Grove, I confirmed that they are using fiber optics for the new equipment. 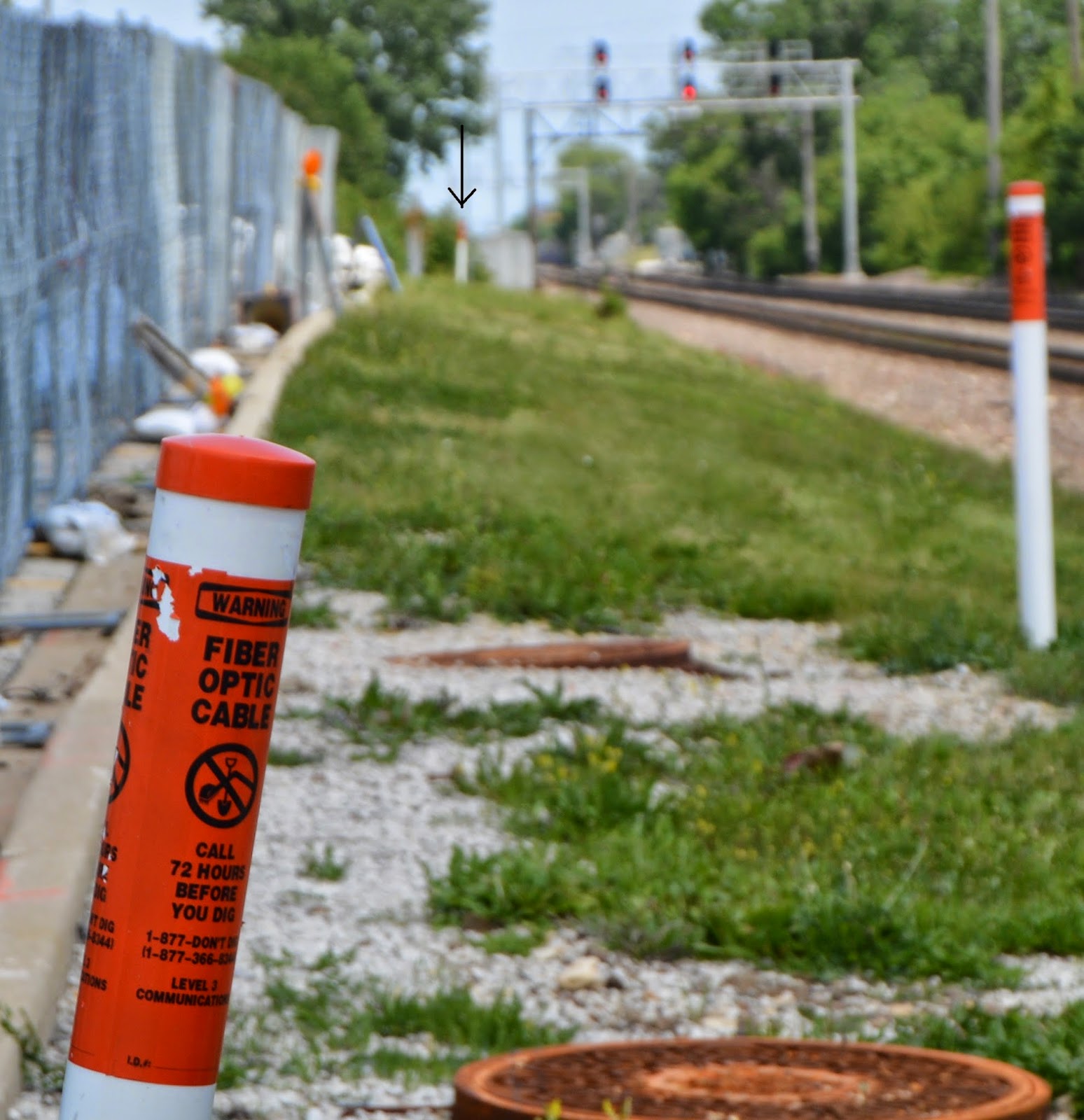 In addition to the two warning posts in the foreground, there is one in the background. I added a black arrow to point it out since the background is out of focus. When I cropped a picture of the above signaling bridges, I left the fiber optic warning in near the left of the picture.

We can see a new eastbound bridge, an old bridge, and a new westbound bridge. We also see crossover tracks. And the truck would be on the Maple Avenue crossing. When I went to recycle a monitor, I was able to grab a view of the westbound signals from the van that one normally can't get because it is from the parking lot of the village's  public works facility. 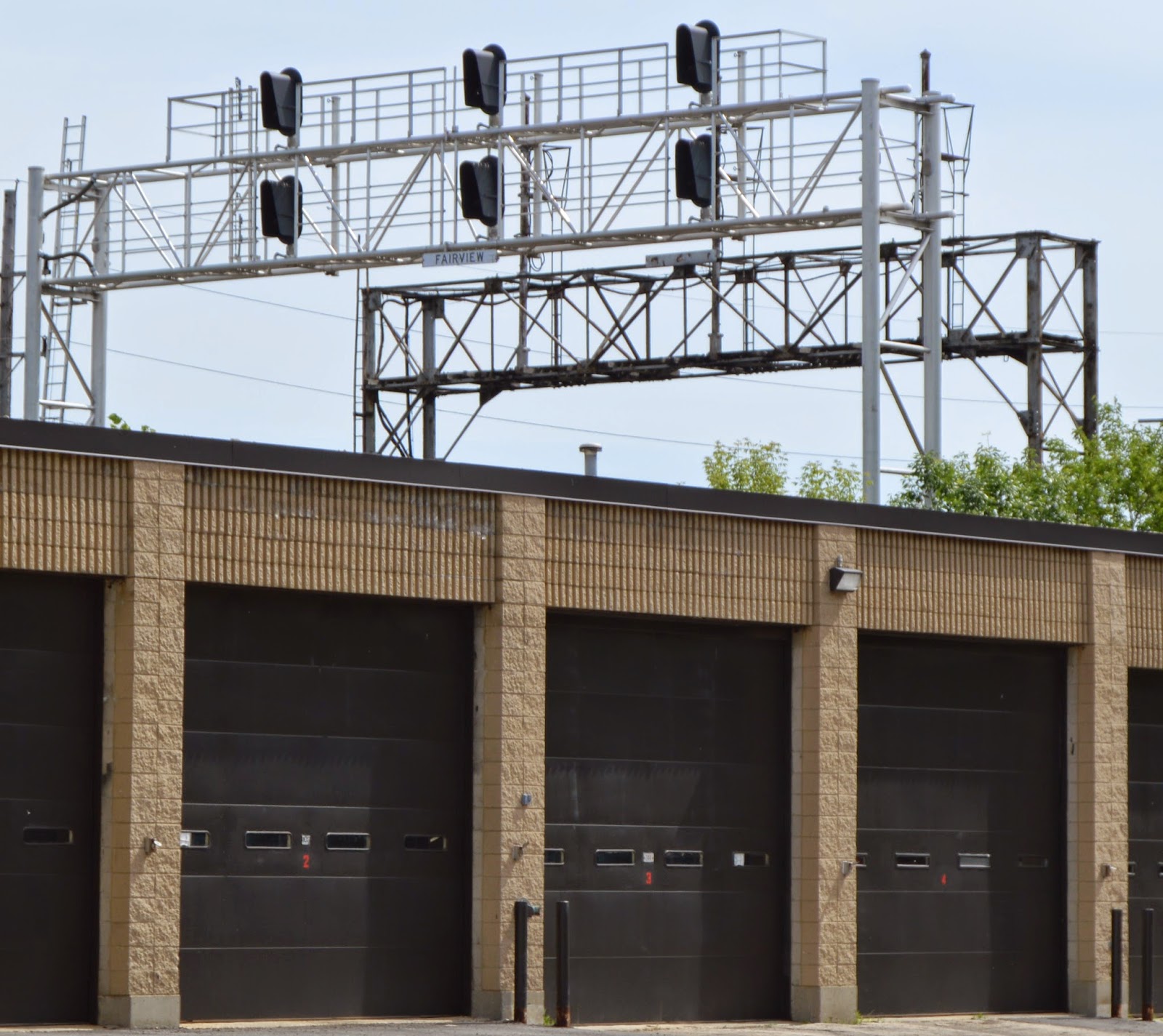 There was a gap in the heavy tree line that let me take this shot of the signaling bridge that is a couple blocks west of the Belmont Station.

And I found another gap that let me get an angle shot. 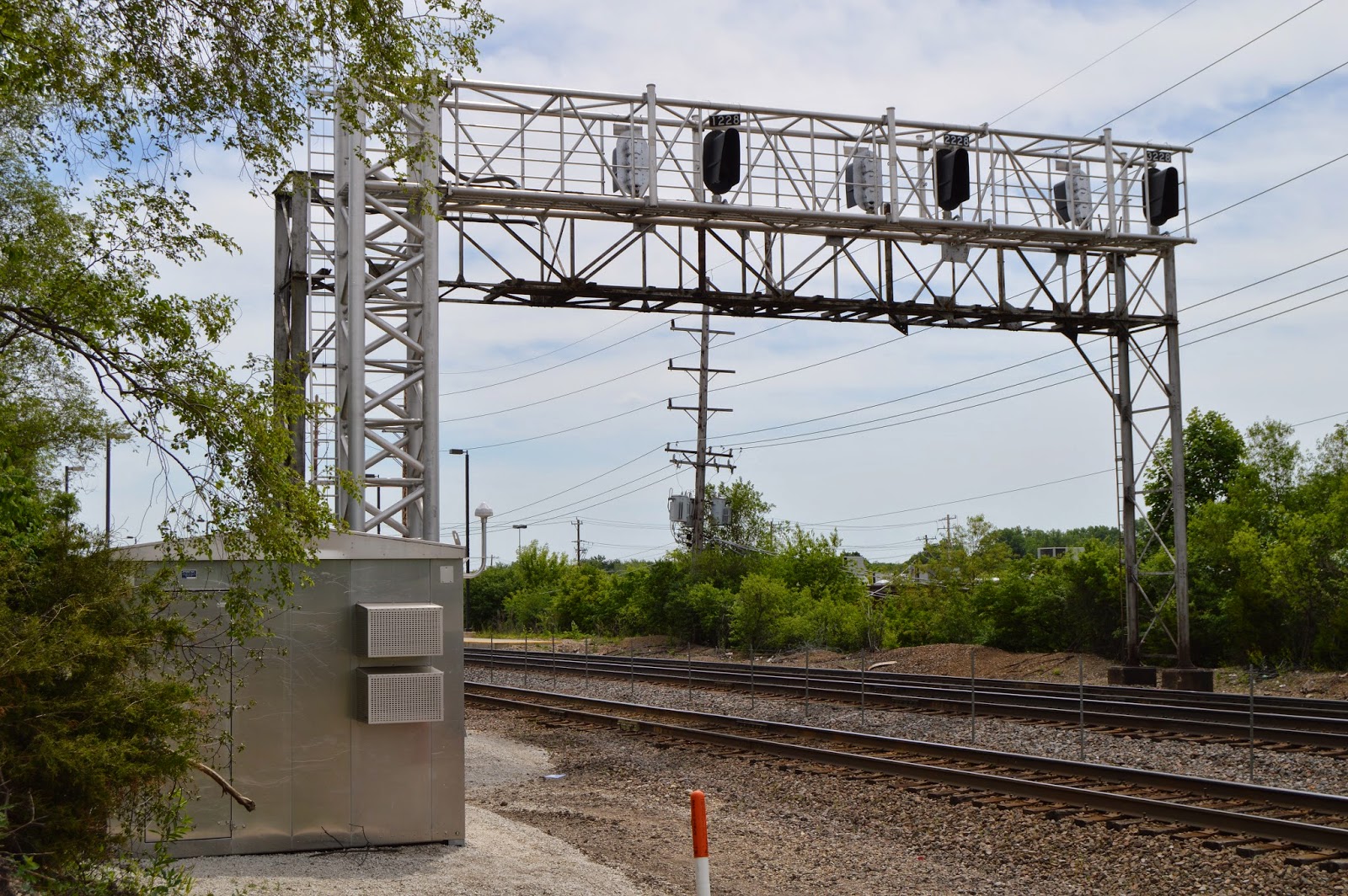 This view caused me to notice how big the signaling house is. I went and looked at the other pictures, and they all have big control houses. I guess they go with one size fits all. I assume they have batteries for power backup, and that would take some room. But the house still strikes me as rather big to shelter some electronics.

Later, when I did the above pictures from Washington Street, I noticed it also had a rather big house for just a crossing gate. 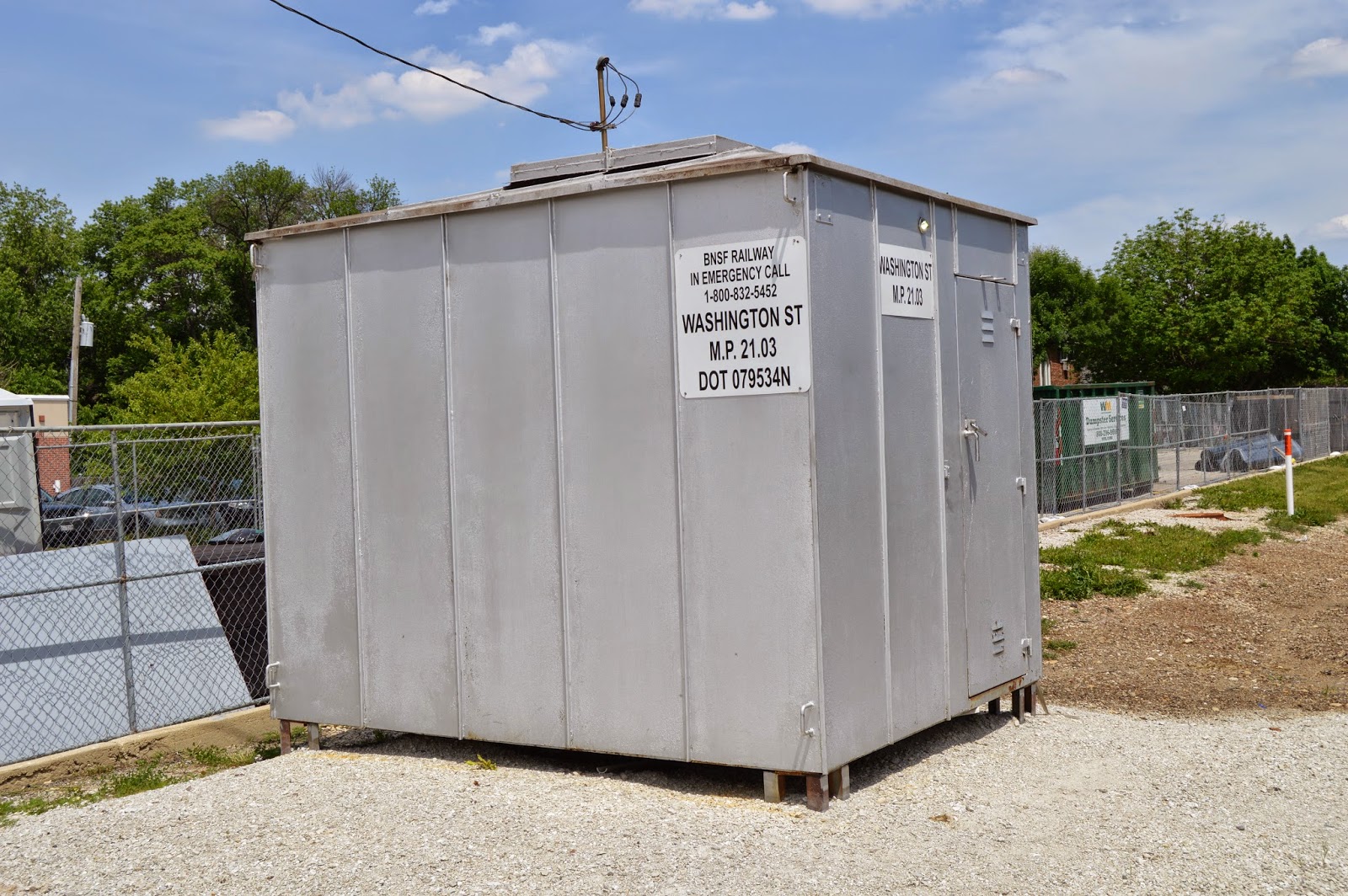 From the position along side the track where the signaling bridge is, I took an eastbound view for context. Note how thick the tree line is. The new buildings on the right are part of the Belmont Station and were built just a couple of years ago when they created the Belmont underpass. 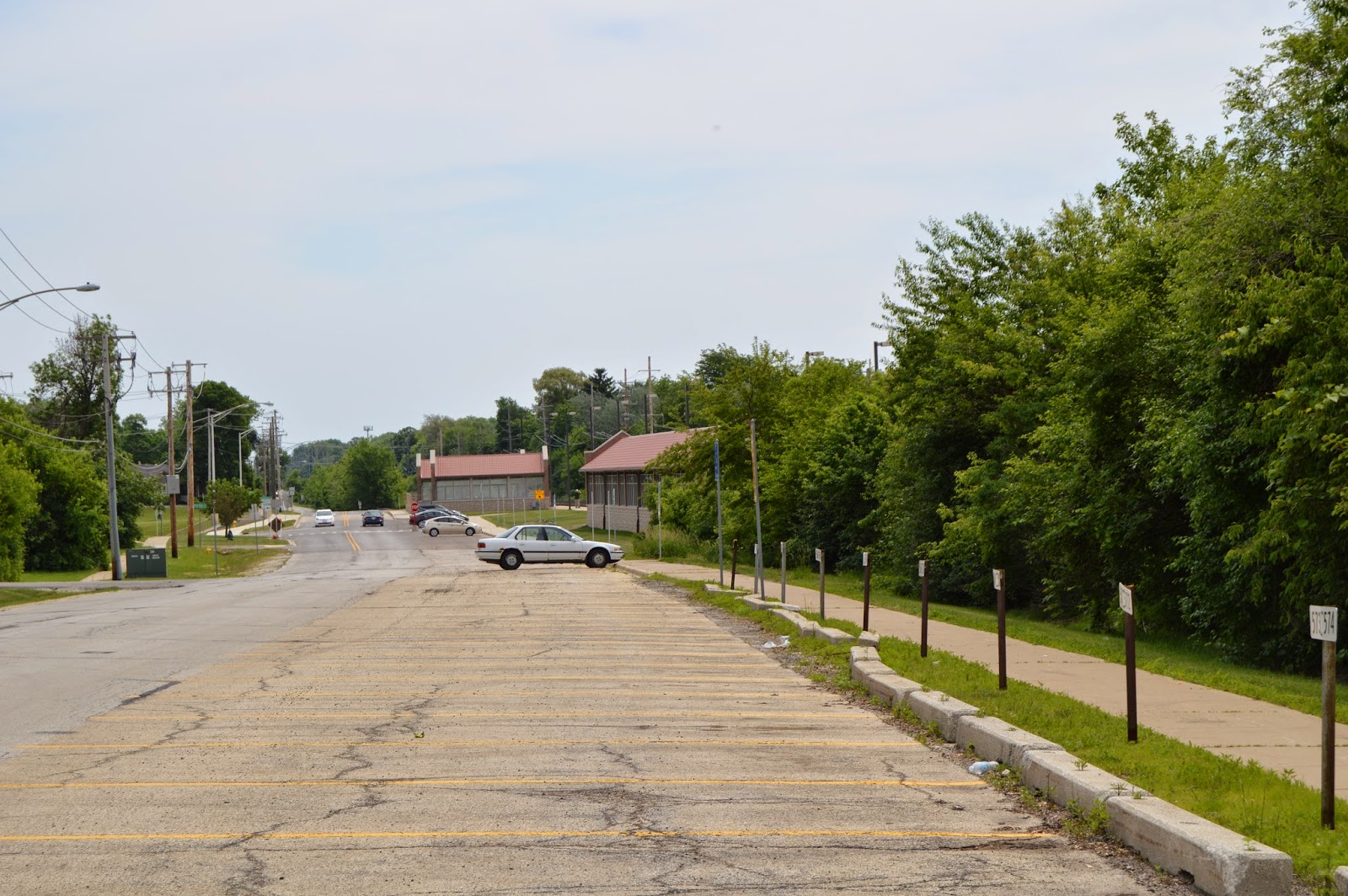 Posted by Dennis DeBruler at 11:39 AM