Other towns that still have a gas station building from the early era are:
The kerosene, then gasoline, pump was first manufactured in Fort Wayne, IN. It went on to become the "Gas Pump Capital of the World because Bowser was joined by Tokheim and Wayne Pump.


I was driving along US 136 through Carthage to Keokuk, Iowa, when I noticed some reasonably priced gas. So I pulled in. I was surprised to see the Sinclair brand on the gas pump. The "Dino" logo disappeared from the Chicago area many years ago. But I see the company still exists. My next surprise was that the pump was mechanical. I have not seen a mechanical pump since the price of a gallon of gas was getting close to a dollar. I had to think a little bit about how to use it.

The old mechanical pumps had separate wheels for dimes and cents. To keep the least significant digit wheel from spinning too fast, this pump has one wheel for both digits that makes one revolution for each dollar pumped. It also pumped very slowly. Since 7 more gallons was plenty for the trip I was planning to make that afternoon, I stopped pumping at $25.00.

And then on my way back from Keokuk, I noticed a lawn full of antique gas pumps. That was worth turning around to take a picture. (Since I was parked in the driveway, I was on private property so I did not spend a lot of time composing the picture. I see now that 3 of the pumps are obstructed.)

The Evolution of the Gas Pump
History of the gas pump info-graphic
The Evolution of the Gas Pump
It was 1885 in Fort Wayne, Indiana where kerosene pump inventor, S.F. Bowser sold his first, newly invented kerosene pump to the owner of a grocery shop. This was to solve the problem and mess of a storekeeper ladling flammable liquid into whatever random container the customer brought.
It was just for kerosene to fuel stoves and lamps and at that time gasoline was just a volatile byproduct of refining kerosene, plus the automobile wasn’t invented and commercially available until around 1910.
Bowser’s invention, which reliably measured and dispensed kerosene – a product in high demand for nearly 50 years – soon evolved into the metered gasoline pump.
The original Bowser pump was utilitarian looking, made up of a square metal tank with a wooden cabinet equipped with a suction pump operated by a manual hand-stroke lever. In 1905, a hose attachment was added for putting gasoline directly into the fuel tank.
There are a few claims for the first-ever drive-in gas station. Standard Oil claims it had a station in Seattle, Washington in 1907, while it’s also been argued that the first appeared in St. Louis a few years earlier. However, most recognize that when “Good Gulf Gasoline” went on sale in downtown Pittsburgh in 1913, the first true drive-in service was opened. “On its first day, the station sold 30 gallons of gasoline at 27 cents per gallon. On its first Saturday, Gulf’s new service station pumped 350 gallons of gasoline,” noted the Pennsylvania Historical and Museum Commission. The station was located directly next to car dealerships, leading new car owners to fill up directly after pulling off the lot.
This was really the start to manufacturers enclosing the mechanics of the curbside pumps in cabinets. These cabinets ranged in design and style. Some basic cabinets simply stored the parts of the machinery, whereas others were more stylized. This was the early days when company logos started to appear on the pump, either directly on the cabinet or on a globe above the pump.
Timeline:*
1890 to 1900 – hand pump with no measurement device
1900 to 1910 – hand pump, some with clock face for measurement
1910 to 1920 – hand pumps with minimal color. Some with clock face (possibly attached visible attachment)
1920 to 1930 – hand pumps, some with color, some with clock face, some with glowing marketing globe on top
1930 to 1940 – art deco styled with color, some with both clock face and glass cylinders, glowing globe on top
1940 to 1950 – square styling and color, electronic with clock face and cylinder, some with sight glass (smaller cylinder), still has glowing globe on top
1950 to 1960 – box style only, glowing computerized measurement and price calculation
By 1918, the first visible pump was introduced. The customer was able to see just how much fuel he was purchasing by the inclusion of a large glass cylinder that was hooked up to the pump. When first introduced, the glass cylinders were retrofitted to curbside pumps that already existed. In 1923 companies started to develop new pumps with the cylinders attached directly to them. This was also the early foray into experimenting with motorized pumping mechanisms versus the manual hand crank. Around 1925, the visible cylinder was replaced by the clock-style meter, which was a dominant feature of early 1930s gas pumps.
1934 was the year that the computer meter was developed by the Wayne Pump Company. With this invention was the departure from the traditional clock-face style replaced instead by a more digital form. Gallons and prices were displayed directly on the face and this caught on quickly. By the late 30’s, all companies used the computer meter. This was the beginning of the Art Deco period as well, which embraces the machine aesthetic. Gas pumps in this era were geometric in shape and featured stepped and vibrant patterns with stainless steel. Although the edges were slightly rounded, the overall pump was squarer in its look. This style was dominant throughout the WWII years, as the government limited their manufacturing.
Once the Second World War ended, cars got lower and therefore it became an obstacle trying to view meters from the car’s new lower perspective. As a result, new, shorter gasoline pumps were designed, which were called low-profile pumps. For the most part, these pumps featured rounded edges, stainless steel trim, large meter faces, and simpler details than what was seen in the Art Deco designs of the 1930s.
Continuing into the 1950’s the trend continued to move away from rounder edges and the stainless steel pump was popular. The hardware was shorter, squarer in shape, and featured unpainted, stainless steel surfaces. The top part of the pump was often larger, setting atop a narrower, tapering base. The units were often set up adjacent to one another in long rows, providing different types of fuels and services.
“Today, 152,995 gas stations dot the landscape, including 123,289 convenience stores,” Ernst reports. On average, each location sells about 4,000 gallons of fuel per day, “quite a jump from the 30 gallons sold at the Gulf station in Pittsburgh on December 1, 1913.”
Gas is flowing throughout the country in mass quantities every day. Whether it’s filling your car tank or being transported, having the proper and safe machinery to handle this liquid is key. In the early 1900’s, a hose was included to the pump to allow for direct pumping. Nowadays hoses include swivel joints and safety breakaways to ensure safe transportation and transfer of liquids.
Animated Swivel Joints
SafeRack is the leading distributor of liquid transfer systems, so whether it’s swivel joints, loading arms, or liquid transfer coupler or adapters, our knowledgeable experts create a system customized to any liquid transfer environment.
Sources:
http://www.automobiledrivingmuseum.org/the-history-and-col…/
http://aoghs.org/trans…/first-gas-pump-and-service-stations/
The Evolution of the Gas Pump
06/28/2017

As part of their Lincoln Highway heritage, Rochelle, IL, has preserved an historic gas station. 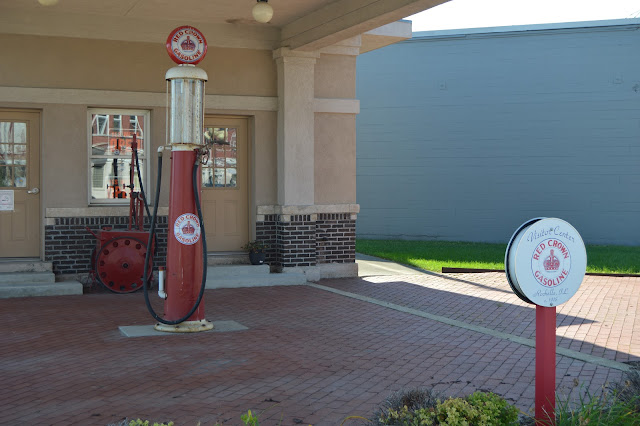 Below is what I remember a filling station looking like. Before automated billing of credit cards by the pumps using satellite, a six pump filling station was a big one. And they worked on cars when they were not pumping gas. I remember they offered to check the oil and clean the windshield while the gas pumped. I also remember when the cost of gas was around 20 cents a gallon. Back then, the 0.9 cents made a difference.  And it wasn't unusual to have two or more of these on the corners of major intersections.
A couple more Shell stations in the 1960s
Thomas McCarthy posted three photos with the comment: "In 1955 My father-in-law Bill Smoot owned a Standard Gas Station on 147th Street and Cicero. Fahey Flynn and P. J. Hoff did a weather spot at his gas station. He was interviewed on tv. My wife still has the weather map with P. J.’s drawings. Bill’s picture is in the corner of the window display."

William A. Shaffer posted two photos with the comment: "Two photos from our Decatur, TX Road Trip last week.  I was somewhat disappointed with the trip.  We should have gone up on a week-end day.  We had to contend with obstacles and people.  I shot a total of 12 photos.  These two were my favorites.
(All Photos by William A. Shaffer)"

I don't remember any filling stations in the 1950s, or even 60s, having an awning. Of course, back then the customer stayed in the car and it was the attendant that was in the rain and snow.
This is much more typical of what I remember in the 50s.
If the pump tops were not still rounded, I would have guessed this was a 1960s station. There would be another island out in front of the station.
Posted by Dennis DeBruler at 6:48 PM