Keokuk Junction Railway (KJRY) is a short line that was created in 1980 to operate Rock Island's yard in Keokuk, Iowa. It has since acquired track from the original Toledo, Peoria, and Western. It is a subsidiary of the Pioneer Railcorp so the reporting mark for the engines is PREL. When the tracks leave the bridge on the west side, they do a sharp turn to the south, cross the BNSF tracks, and enter the old Rock Island yard along the Mississippi.

While I was on the observation deck for Lock #19, I heard a train whistle. Since the swing span had closed earlier, I figured it might be a train that would cross the bridge. So I ran back to the van to get the 55-200mm lens. As it turns out, I had plenty of time. The speed limit for the bridge is 5 mph. In fact, as seems to be normal with short lines, the max speed on the line is low: "Train speeds are 10 mph max except between Rawalts and Kolbe, 20 mph max, and Smithfield to the Spoon River, also 20 mph".
The train was a KJRY covered-hopper unit train. 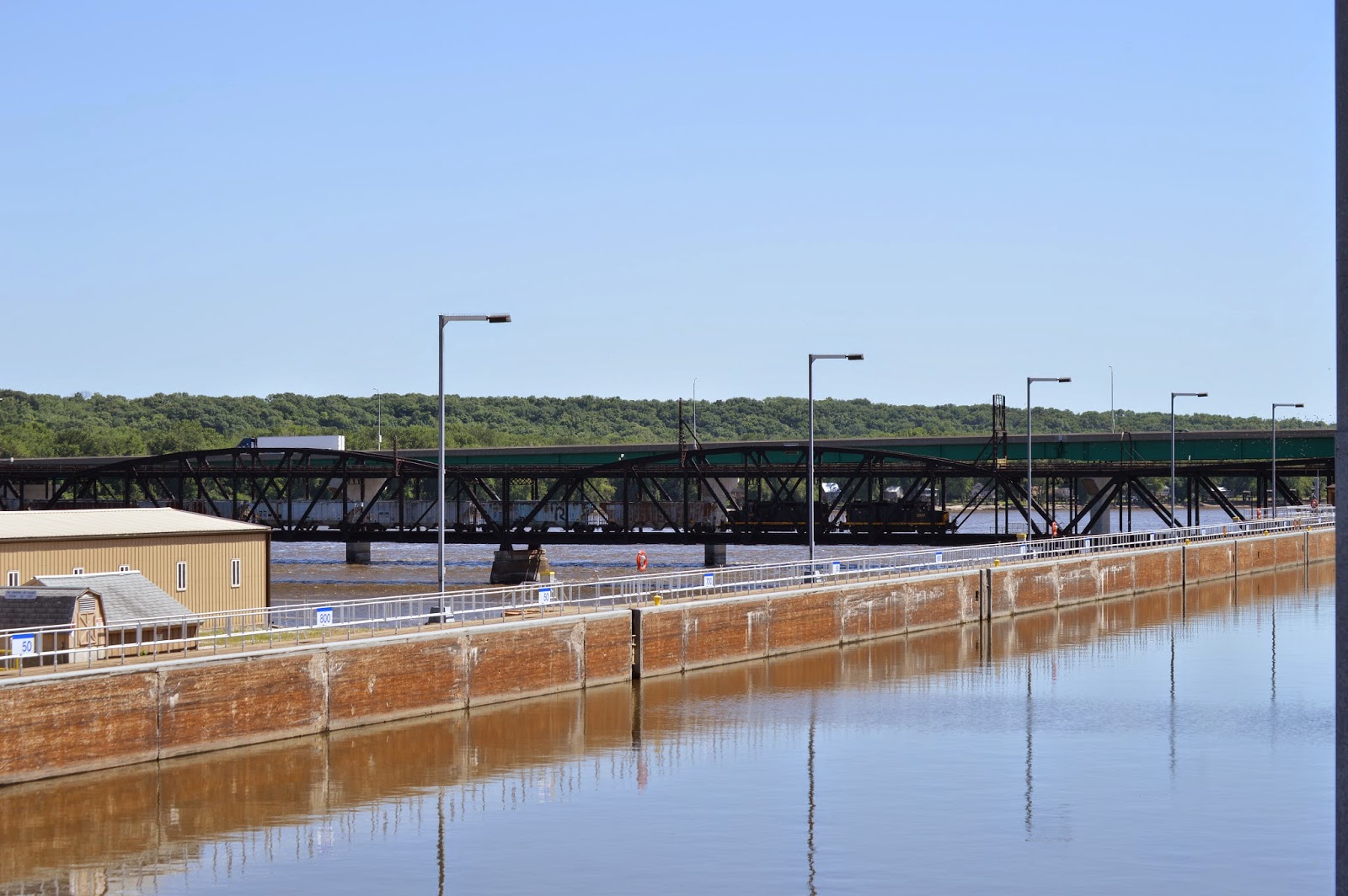 I believe the second car with the stylized "R" is a Rock Island car. That would mean the paint job is older than 1980. There are enough "non-white" cars in the train that I can tell where the pictures overlap and determine that the train had 19 cars.

Some videos by David Jordan. I don't normally pay much attention to videos because you see so many pictures and videos of trains that I concentrate on the railroad infrastructure. But this line runs F units and is a shortline rather than a Class I, which make it more interesting. Videos 1, 2, 3, and 4. A Facebook comment David added for Video 1:


Back on August 2, the KJRY received its first pipe train from the Union Pacific. It hauled 40 cars with 2003-1750-1752-2041-2032. The rear ten cars were dropped at LaHarpe and these units made it all the way to Keokuk (a rare appearance there by the F-units). A track in KJRY's Twin Rivers Yard is being used to transload pipe to trucks for shipment to a staging yard for the Dakota Access Pipeline, which is to run from North Dakota to Patoka, Illinois when completed. See part 1 of 3 [Video 2 in this collection].


Erik Rasmussen posted two photos with the comment: "I stopped by LaHarpe on Sunday afternoon on my way home from Kansas City. Here are a couple images from my drone."
Davis Shroomberg I see they moved stuff around from the last day the F's ran.
Thomas Fosler they did alot.

A video of the first KJRY train on the new Spoon River Bridge on May 21, 2014

Six photos of the last run of the F-units

Posted by Dennis DeBruler at 6:57 AM