(Update: the industry is learning that the improved designs are not good enough. Several photos and some articles about the carnage of just one LPG tank car being punctured by a boxcar coupler in 1974.)
To summarize the following, since I have become aware of the safety design issues concerning tank cars, of the unit tank-car trains for which I took pictures, 3 trains had old cars, 3 trains had newer cars, and 2 are unknown because the pictures were not good enough to determine the design.


The railroad industry has been caught by surprise by how explosively the crude oil from North Dakota's Bakken fields burns. Trains that derail with Bakken crude oil have dramatically publicized the safety issues with the standard DOT-111 tank car that have been identified by the industry for a couple of decades now by producing dramatic fireballs. And while the US Department of Transportation has simply advised railroads to quit carrying Bakken crude in old cars, Canada has ordered the railroads to quit carrying crude in the old cars by 2017. So guess who is probably going to get the new, safer cars.

The Chicago Tribune reporter Richard Wronski has had a few articles concerning tank car safety. His "Area not prepared for large rail spills" article in the May 16, 2014 issue points out that the towns along the CB&Q tracks don't have enough of the special foam needed to deal with a tank car fire. They have just a little foam for incidents like household gas fires. Only major airports currently have the equipment and quantity of foam that would be needed to attempt to deal with a tank car fire.

Given the earnings of the oil industry replacement should not be a matter of cost, but it is. It should be a question of manufacturing capacity. Another reason for a manufacturing capacity crunch is that the Keystone XL pipeline never got built. The cover story for the March, 2014, Trains magazine indicated that there is a two-year backlog for new tank cars. And I got the impression that was to handle growing production, not to replace old cars. But any ramp up of capacity done now will become excess capacity when the crunch is over. That means that plants would have to be closed and people laid off.

It also is interesting that the Trains oil-tank article was 12 pages long, but it did not mention the safety issues concerning tank cars at all! Update: in their NEWS&PHOTOS section, they did have a 2 page spread on tank safety.

Of the design improvements that new tank cars have, the two that are most visible are the head shields and the stronger rollover protection of the equipment on top. The following picture of cars in a train (May 29, 2014, 1:44pm) in Downers Grove that had Norfolk Southern engines has a half-height head shield and a more robust rollover protector of the fittings on top of the tank. The hazmat placard shows 1267, which is "Petroleum crude oil." The hopper car is because this is the end of a tank car unit train that is carrying hazardous material. It is a buffer car in this case, and it is probably filled with sand. Safety Design: new

It also illustrates what I have seen on every CB&Q tank-car train---a buffer car at the beginning and end. I assume it is full of sand and provides a "crumple zone" to absorb G forces in the case of a head-end or rear-end collision. It is interesting that a buffer car is not used in manifest freights even if a big block of tank cars is the first thing that follows the engines. On the other hand, those cars could have been carrying a non-flammable product such as corn syrup. It is also interesting that the one tank-car train I have seen on the SanteFe route did not have buffer cars. (Most trains on that route are modular, containers and or trailers, or vehicle trains.) 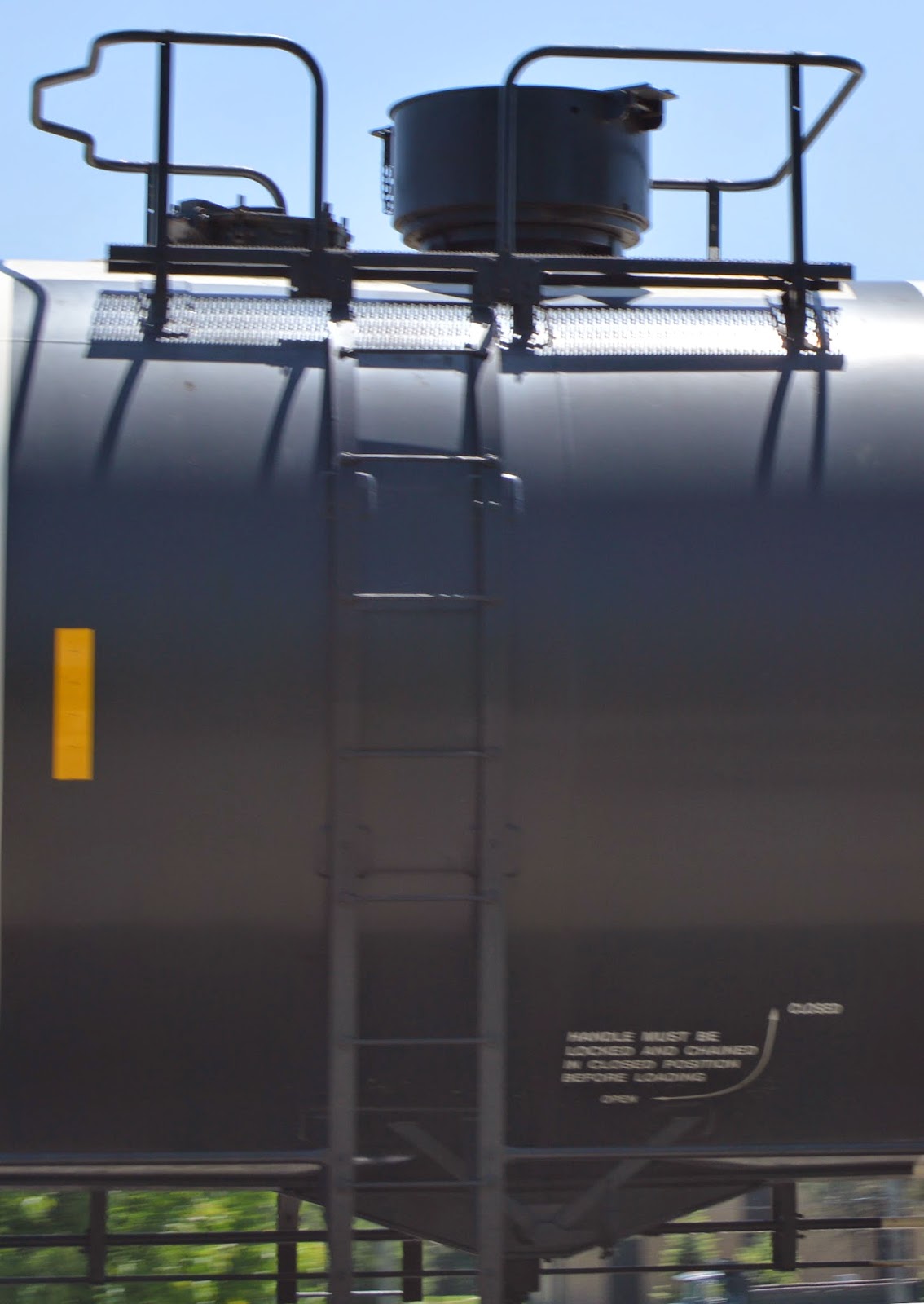 When I looked at a close up of the center of a car, I noticed that there is a cone on the bottom. Is it to help protect the outlet valve? Probably not because a picture of an old design below also has a cone. So the purpose of the cone is probably to help drain the oil. One of the failure modes during a derailment was that the handle on the outlet value would be moved to the open position as it slid along the ground. An improved design was to have the handle break off rather than open the value. It is not clear to me what this car would do during a wreck. It seems that it would be awful easy to break the chain and still spill the contents.

The rest of this essay is an analysis of all of the oil trains for which I have pictures or video. So far, all of the cars in a train are of the same design.

In addition to the usual buffer car after the engines...

...it had a 2-bay covered hopper car before the tank cars began.

I wonder what this car is carrying. Is it carrying fire fighting foam?

20140607 10:13am, Washington Street crossing, eastbound pulled by a Santa Fe warbonnet and a BNSF warbonnet. It also had the white covered hopper after the usual buffer hopper. I noticed that both trains that had the "white car" had the old design. Fire suppression can use a dry chemical. Safety Desgin: old 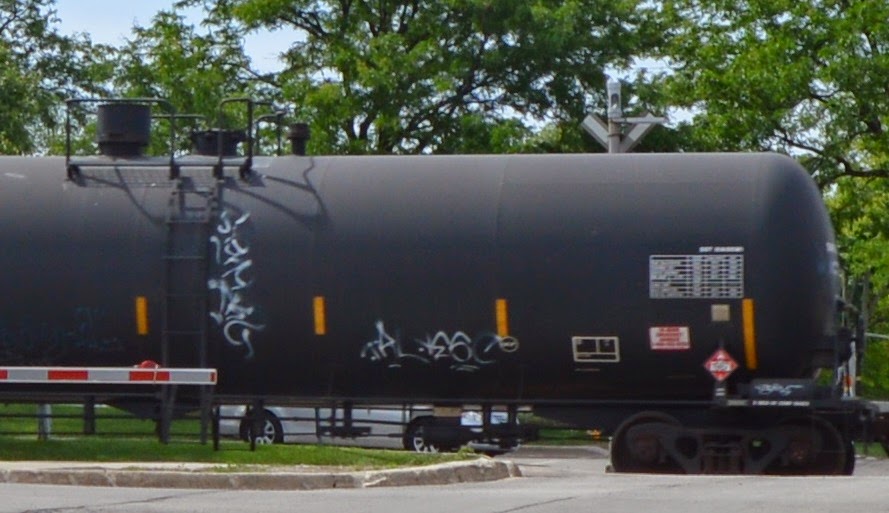 20140607  2:07pm, eastbound. I was walking along Prarie, and it was too obscured by trees to determine the desgin. Safety Design: unknown

Apr 2019 Update: Will G Benson posted two photos with the comment: "And here's a TILX Tank car, presumably on its first revenue run."
Chris van der Heide Not placarded, so it’s either assigned to non hazmat loading, or it actually hasn’t even been loaded yet. Doesn’t get much fresher than that!
Noe Gutierrez Blt 4/19, so it's a newborn. Class 117 cars are carbon steel tanks with full headshields and thermal jacketing. The W indicates fusion welding while the J indicates it's built to 117A specs, normally used for flammable liquid service. I'd guess this car is destined for an ethanol train somewhere.
Keith Maccauley 'J' implies that the tank car is equipped with thermal protection (insulation), head shields and double shelf couplers. DOT117J100W tank cars are mandated for certain Class 3 Flammable commodities.
Keith Maccauley Somewhat complex topic. Near term; Crude Oil (UN1267), shortly; Ethanol, eventually; all Class 3 Flammables (gasoline, diesel..................). As information, Liquefied Natural Gas (LNG) is transported in a cryogenic vessel. Liquefied Petroleum Gas (LPG/propane) is transported in a 'pressure' type tank car; DOT112J340W.


Looking at these restrictions, I'm reminded that lower temperatures cause the rail to contract and can pull the rail apart.
The track record of the new, improved DOT-117 is not good.

Posted by Dennis DeBruler at 1:27 PM

Email ThisBlogThis!Share to TwitterShare to FacebookShare to Pinterest
Labels: freightCars