Many of the views of CB&Q tracks in Downers Grove include some power lines. For example, a view we have yet to see is looking west from the Washington Street crossing.

Since this looks like a wide-angle shot, I went back and retook the picture with a more normal (55 mm) focal length. While looking for the time stamp for the second picture, I noticed the details tab for the properties. As I had hoped, since I'm letting the camera control the f-stop and shutter speed, those values are stored as properties and appear to be accurate since the above picture was taken on a cloudy day whereas the picture below was taken on a sunny day. The captions record these values. But both pictures claimed the focal length was 55 mm. And they both had 82 as the value for "35mm focal length". So the camera can't sense the lens zoom position.


Since a commuter was coming on track M3, I waited until the gates started ringing to record how close a train is before the gates go down. The gates are already down for Main street.


I took earlier photos to catch cars going over the crossings to illustrate where the Main Street and Forest Avenue, respectively, crossings are. (I'm standing on the west end of the Washington Street crossing.) I included the platform work in the cropped picture to document that, once again (June 9), nothing is being done after they tore them up.

I seemed to have digressed because my point of interest is the power lines running along the south side of the tracks. These come from the south side of the Lisle substation. According to Wikipedia, ComEd uses 34.5kV for the subtransmission lines. But the tall insulators look more like 69kV. However, when I digitally zoomed in on the insulators, I guess they are porcelain insulators.

When I looked at the true disc insulators in a later photo, there were only 3 disks. So I'll assume that 34.5kV is correct.

About a block east of Washington Street along the tracks is, I assume, an automated isolation switch. It appears to be in the closed position. 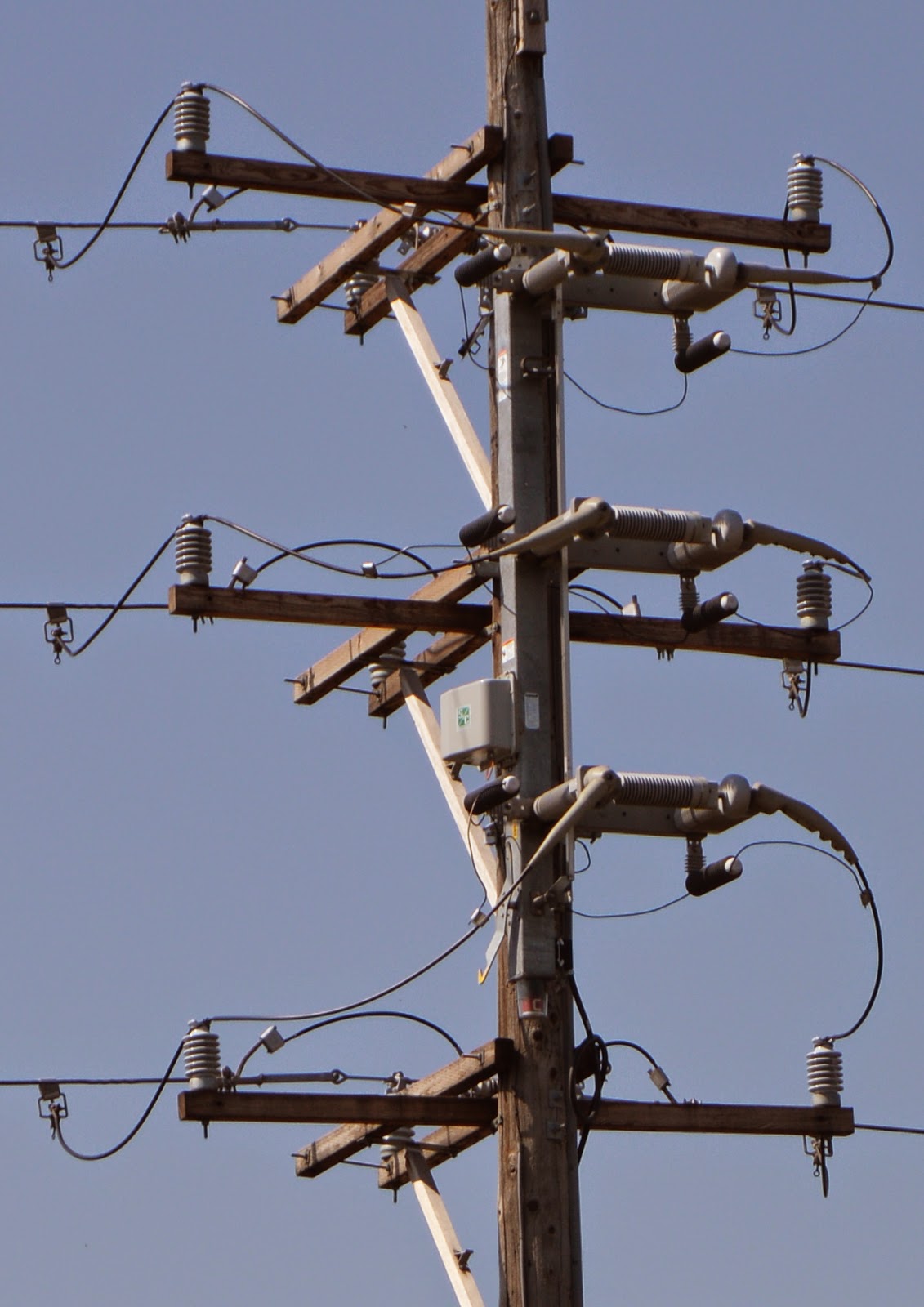 Following the lines further east down Warren Avenue, you will be forced to go north at Prospect Avenue. Then turn right on Rogers Street and turn right into the first parking lot. On the south end of that parking lot is a "tap" substation.

This view is from the north. Note in the background the old and new track signaling bridges that are East of the Washington Street crossing. I believe the cube in the middle is the transformer. I was surprised how small the transformers were in the Lisle substation. But this transformer in a lower voltage substation meets my expectations of a "big box." I don't know what the rectangle on the right is. There are two distribution circuits leaving this substation. They go back towards the tracks underground and then go up poles to leave east and west. I got just a partial of the east pole on the left. The west pole is in among the trees about two-thirds of the way across the picture.

A view from the west. 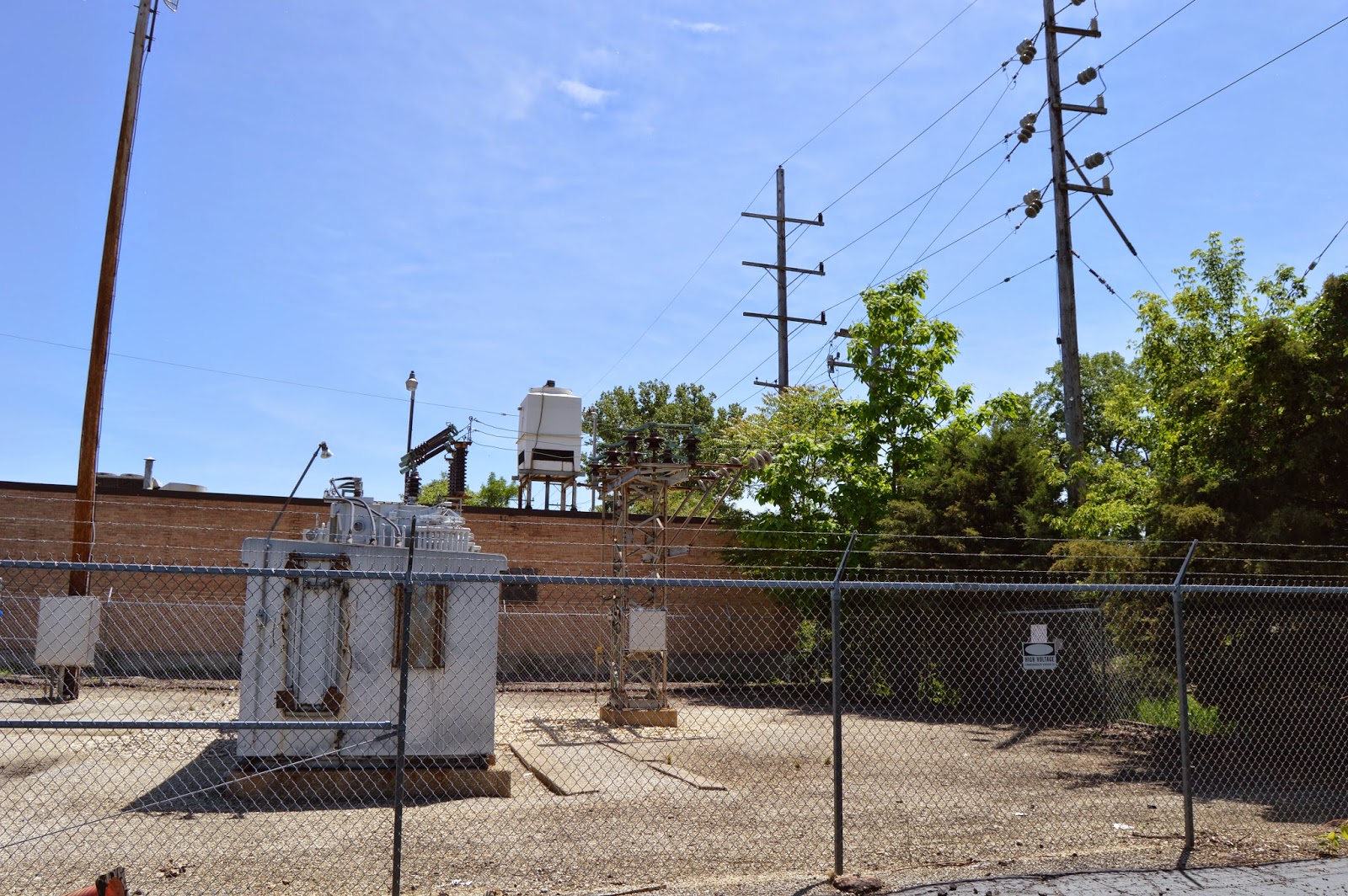 It is still hard to see the pole terminating the east circuit because it is behind the one tallish tree in this view. 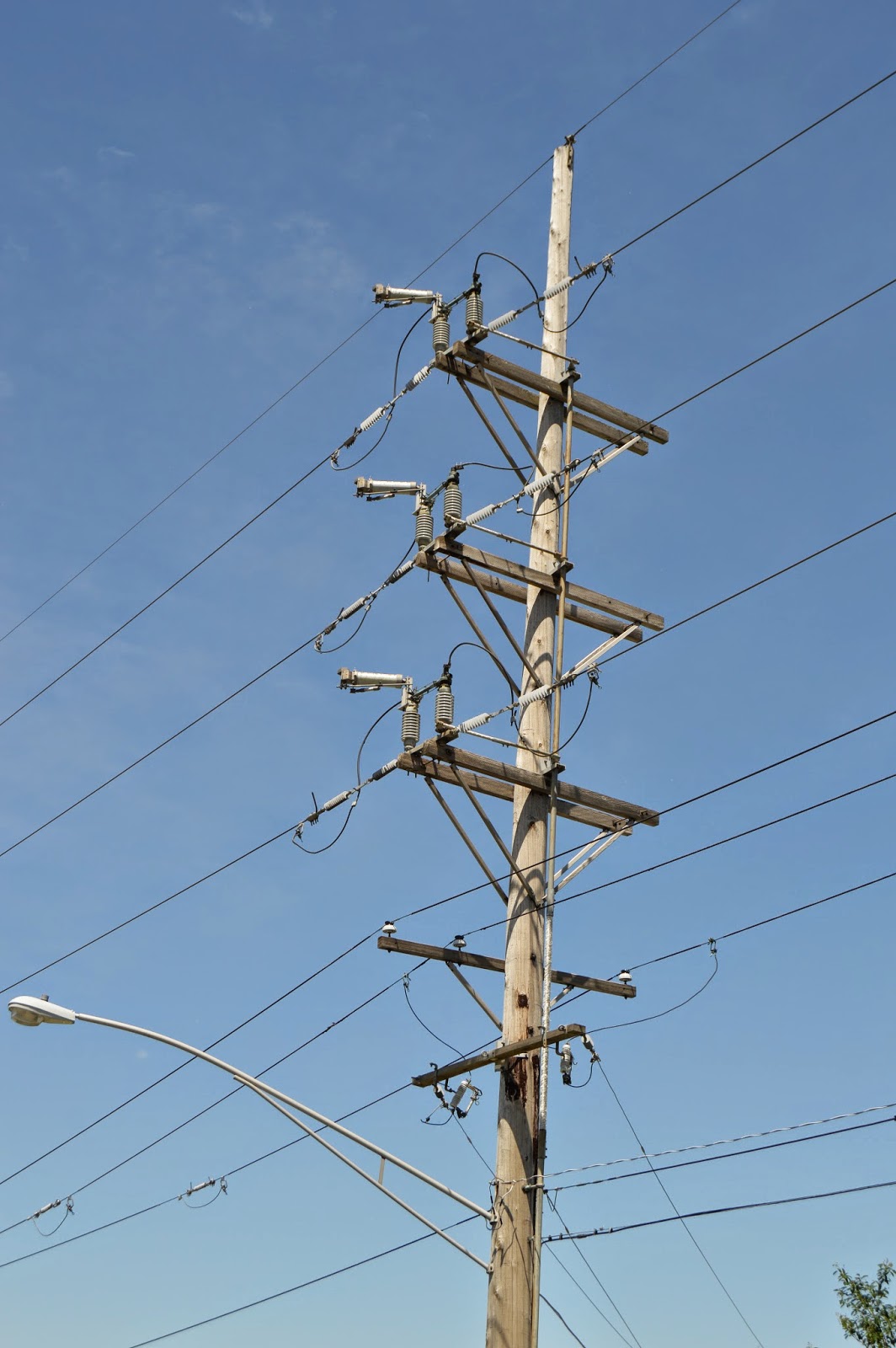 This one appears to be manual and in the open position. But I really don't understand how it would close. The control bar running up the side of the pole is not connected to the parts that I would expect to swing when it is closed. Thus the "tap" substation above is being fed from the line we have been following. I followed this line up Maple Avenue to see what other substations could feed the tap substation if they changed the isolation switches.

The line follows Maple until it gets to Cass. And then it goes north to a substation south of Melrose Avenue that includes a switchyard.


One subtransmission line continues north along Cass, and another goes west. Following the northern line, it follows Cass until 35th street and then jogs east to follow Midwest Road. Along this stretch I noticed that they replaced some of the tall insulators with some short insulators.

This supports the conclusion that the subtransmission voltage is just 34.5kV.


The line continues north along Midwest until it turns east at the I-88 tollway ramp. Fortunately, I noticed the street sign at the last moment and avoided turning right onto the ramp. On the other side of the tollroad, I noticed other subtransmission lines going to the east. And I drove under a transmission line. 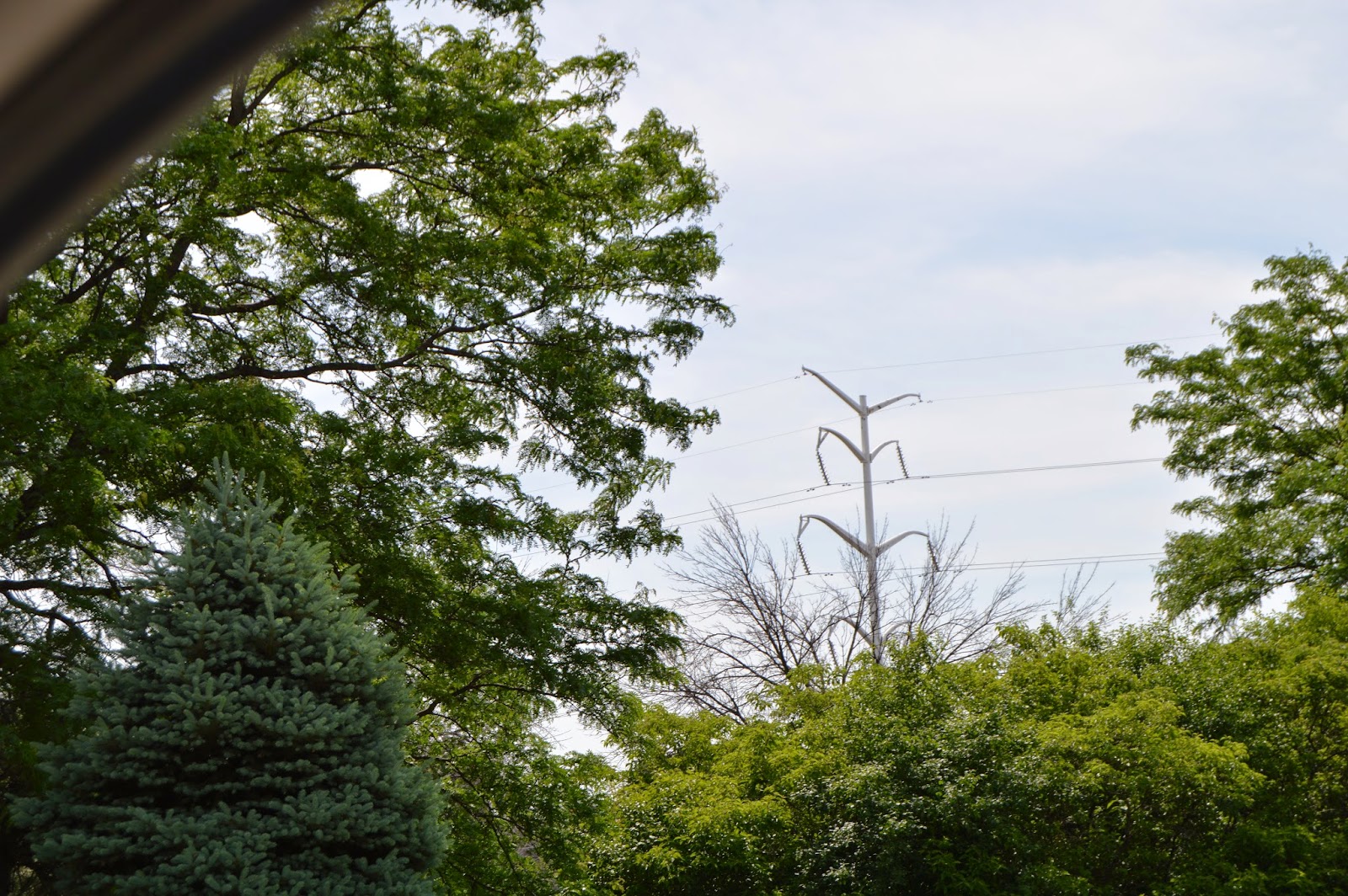 I can't follow subtranmission lines on the satellite maps, but since more than one transmission line heads east from Midwest, I'm going to assume they terminate at the Oakbrook substation.

Tracing the other line from the Cass and Melrose station, it goes north on Cass until it turns west on Traube Avenue. And then north on Park Street to west on Ogden Avenue. At Fairview, it goes north and then continues west along 41st Street until it is west of Main Street. And then it works its way west past a park and between a couple of houses to Belle Aire Lane. It goes south along Belle Aire to Ogden and then west to the north side of the Lisle substation.


It is no longer unusual to see distribution lines buried, but it must still be rather expensive to bury subtransmission lines because of the higher voltage. I learned that organizations can pay ComEd to bury them. Alcatel-Lucent had the wires passing their buildings on Warenville buried when they built their additions in the late 1990s.

It is interesting to note who else pays for buried utilities---the tollroad...

...and ComEd. In the map below, the two bright white roofs are ComEd buildings. I was following a subtransmission line along 22nd Street from Midwest Avenue and noticed that it disappeared. After studying the satellite map, the lines jogged north through a parking lot and went west on Butterfield Road until they disappeared at the red letter A. The lines then resume along 22nd Street at the red letter B.

And this is the resulting view of their office complex. Their two buildings are the ones chopped on the left and the right.

So the ComEd executives do not need to see any of their wires when they look out their office windows.


Posted by Dennis DeBruler at 4:21 AM