Normally I would not bother with road bridges. But they are an important part of our current industrial heritage. And, who knows, maybe people someday will figure out the other 10 or so dimensions of string theory and invent anti-gravity cars. Then industrial archaeologists will be studying the remnants of our road bridges. I already documented a road bridge that had a personal impact because it screwed up my commute to work. This essay is about the other bridges (Warrenville and Ogden underpass) that impacted my commute.

When they built I-355, they closed Warrenville between Cross Street and Ivanhoe Ave. And they originally planned to keep it closed rather than build the needed bridge. Fortunately, there was enough of an uproar that the bridge was built. I see there is an error on the map. Warrenville now goes over I-355 and all of the ramps. The long bridge in the following view is the Warrenville bridge. The roads you see are just ramps. I-355 itself is under ground here to go under I-88.

While they built I-355, I had to use Ogden Ave. Construction first started with the installation of traffic lights on Ogden where the western most ramps are on the map. For several months, there was a parade of earthmovers taking dirt from north of Ogden to south of Ogden. They had someone stand at the stoplight and whenever he saw an earthmover coming, he would stop traffic on Ogden until the earthmover had crossed the road.  During the first few days during rush hour this backed up traffic for several blocks! They finally assigned a foreman, or someone who had the authority to stop the earthmovers, to control the lights during the rush hours. He would make an earthmover wait until a second one arrived if they were closely spaced. And that made the traffic backup reasonable.

The reason for all of that earth moving is that I-355 goes under I-88 but over Ogden. In fact, I-355 is elevated to south of the CB&Q railroad tracks. To put in perspective the amount of dirt moved, the road grades that you see around Ogden were quickly made near the end of the earth moving phase.

The tollroad built a headquarters building east of I-355 and south of I-88. It has a high berm between it and I-355. I guess tollroad executives don't like listening to the road noise that they had expected home owners to listen to for many years. I noticed that there have been a lot of sound abatement barriers constructed along the roads during the last couple of decades. This high berm gave me a good vantage point for some pictures. See the red letter A near the middle of this satellite view for the location of where I took the pictures. The letter B in the upper-right corner is where a picture of the Morton Arboretum's salt berm was taken. The letter C to the left of the A is discussed later. 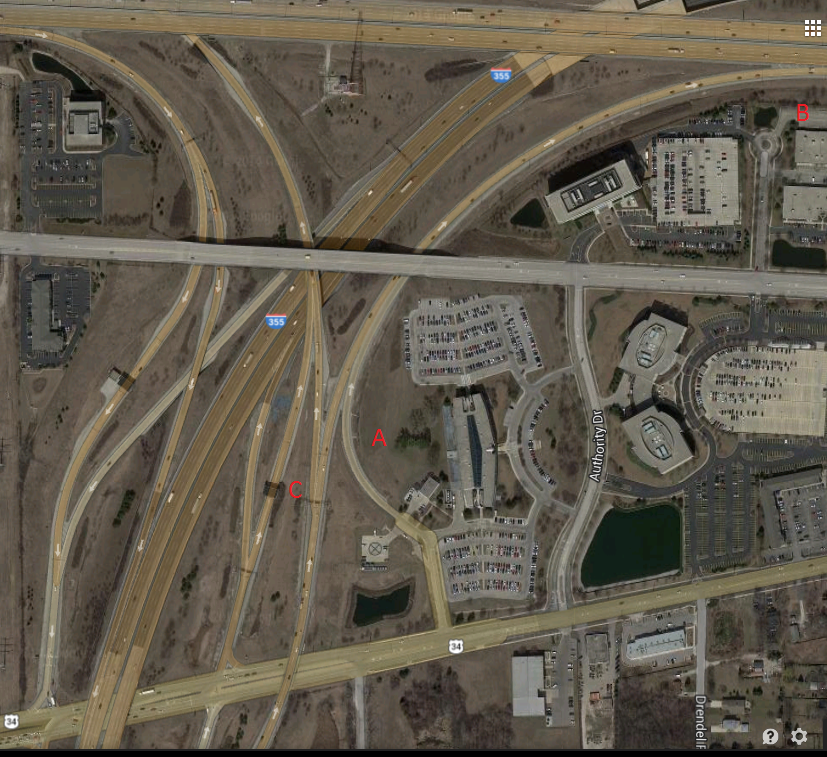 Looking northwest we see the Warrenville bridge on the right. The bus to the left of center is on I-355 as it climbs up from its underpass of I-88. The truck behind it is on the ramp that takes eastbound I-88 traffic to southbound I-355. The road in left-front is the ramp taking northbound I-355 traffic to I-88. The ramp splits just past the black car and the near route goes to I-88 east whereas the far route with the red truck goes to I-88 west. The black car in the foreground is from Ogden, and it will join the ramp to I-88 east.

More on the Ogden bridge later. The tool booth is for westbound I-88 traffic coming from Ogden and is denoted by the letter C on the above map. Note on the map the short distance between the toll booth and the ramp for traffic coming from I-355. Not only is that traffic moving fast through this curve, the ramp goes up a steep grade to meet that traffic. You have to accelerate hard after leaving the toll booth to get up to traffic speed on that hill. And it is hard to see the traffic that is coming at you from around that curve. When I taught my daughters how to drive, we did other ramps for expressway training and used this ramp as the final test. Over the years, I have driven a lot of expressways, and this ramp still strikes me as one of the scariest in the country. But it is currently not a problem because it has been closed for months.

Turning towards the east from my vantage point on the berm, we see the tollway headquarters.

My daily commute allowed me to watch this bridge being built whether or not I wanted to see the construction. One day we were using the south lanes while they were using the north lanes to build a crane. Specifically, they used two regular cranes to build a big crane. Each tread for the big crane arrived on a flatbed trailer. The body arrived on a lowboy trailer. I'm guessing the maximum width for a dual escorted (front and back escorts) over sized load is 14 feet, and the body used every foot that was allowed. A few more flatbed trucks brought the sections of the boom. The two little cranes then went away, and the big crane spent several days lifting each beam for the north span. And then they switched us to the north lanes and the crane used the south lanes to lift the south spans. When done, two regular cranes came back to dismantle the big crane so that they could haul it away as several truck loads.


Driving I-355 northbound. We start from the I-355 bridge over Ogden looking out the passenger window east down Ogden then...


...looking forward. I didn't crop the top and bottom of this picture as closely as I normally would so that you can see the microwave tower and the curvature of the road. The top bridge in the background is the Warrenville bridge. The lower bridge is the merging Ogden plus northbound I-355 traffic that is going westbound on I-88.

As we progress, we see the road continues to curve towards the east. 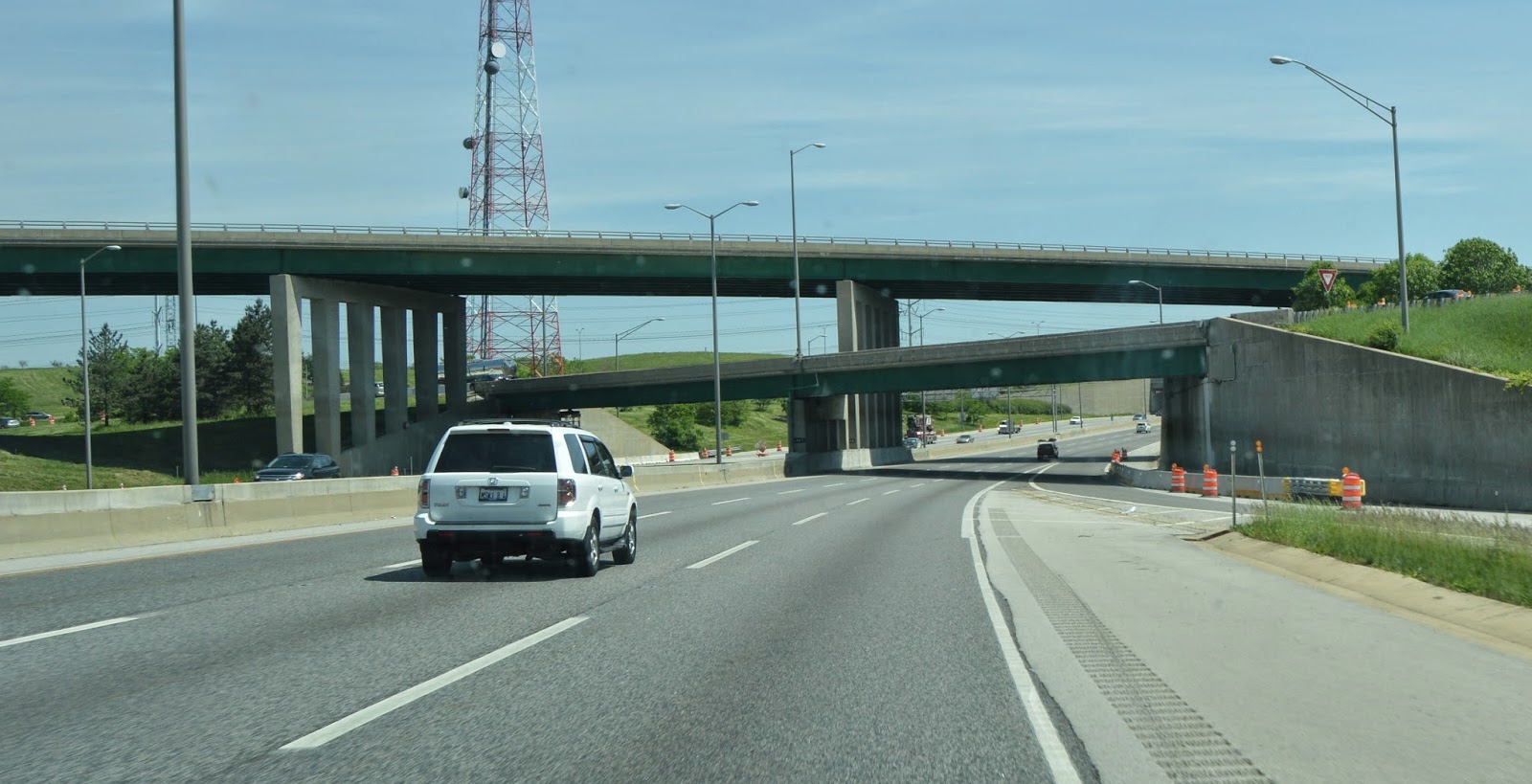 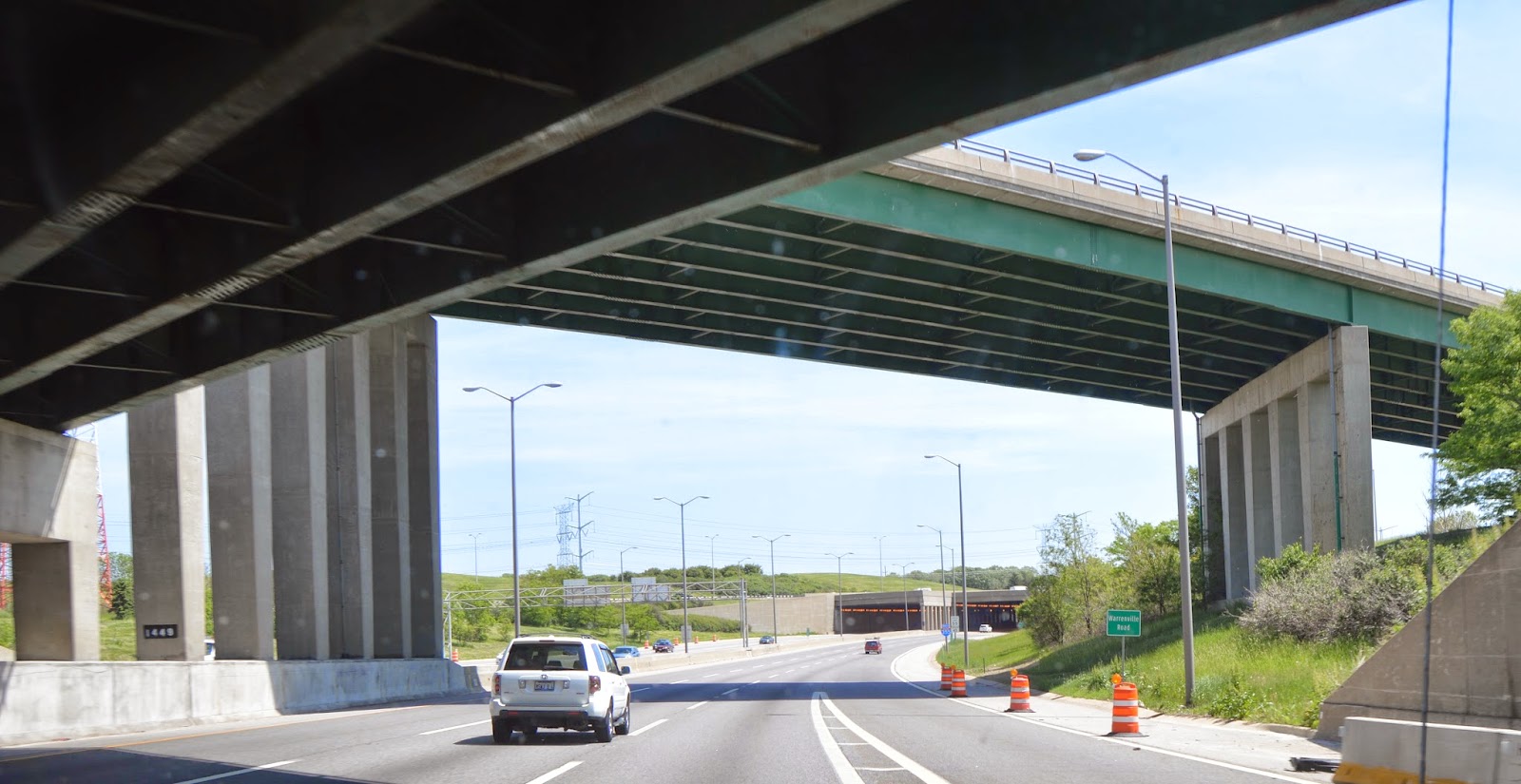 This clearly shows the skew angle of the bridges.

And this shows that the bridges themselves follow the curve of the road. It also makes me appreciate that the other pictures did not catch a glare off the windshield. 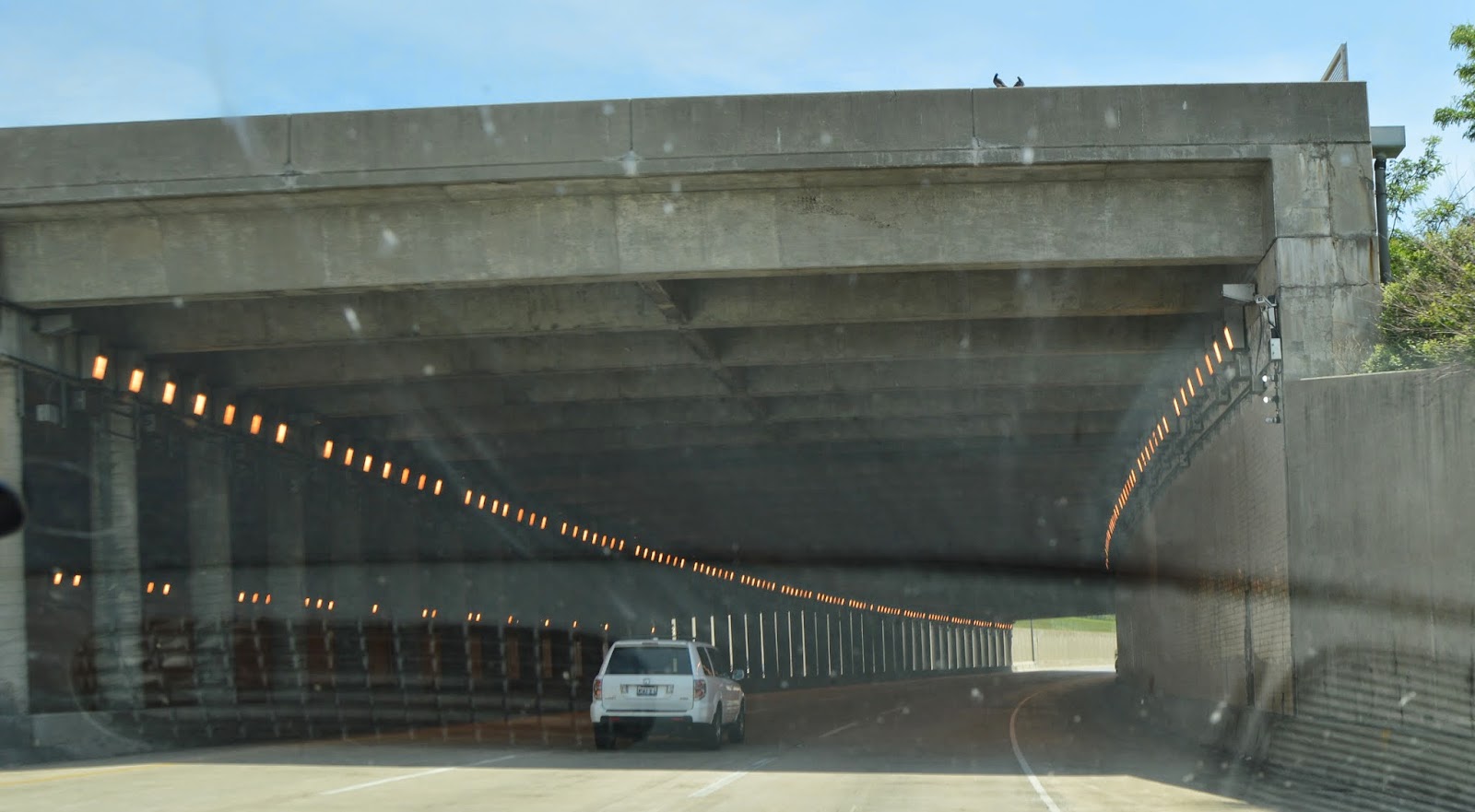 And now the road starts back up to grade level. 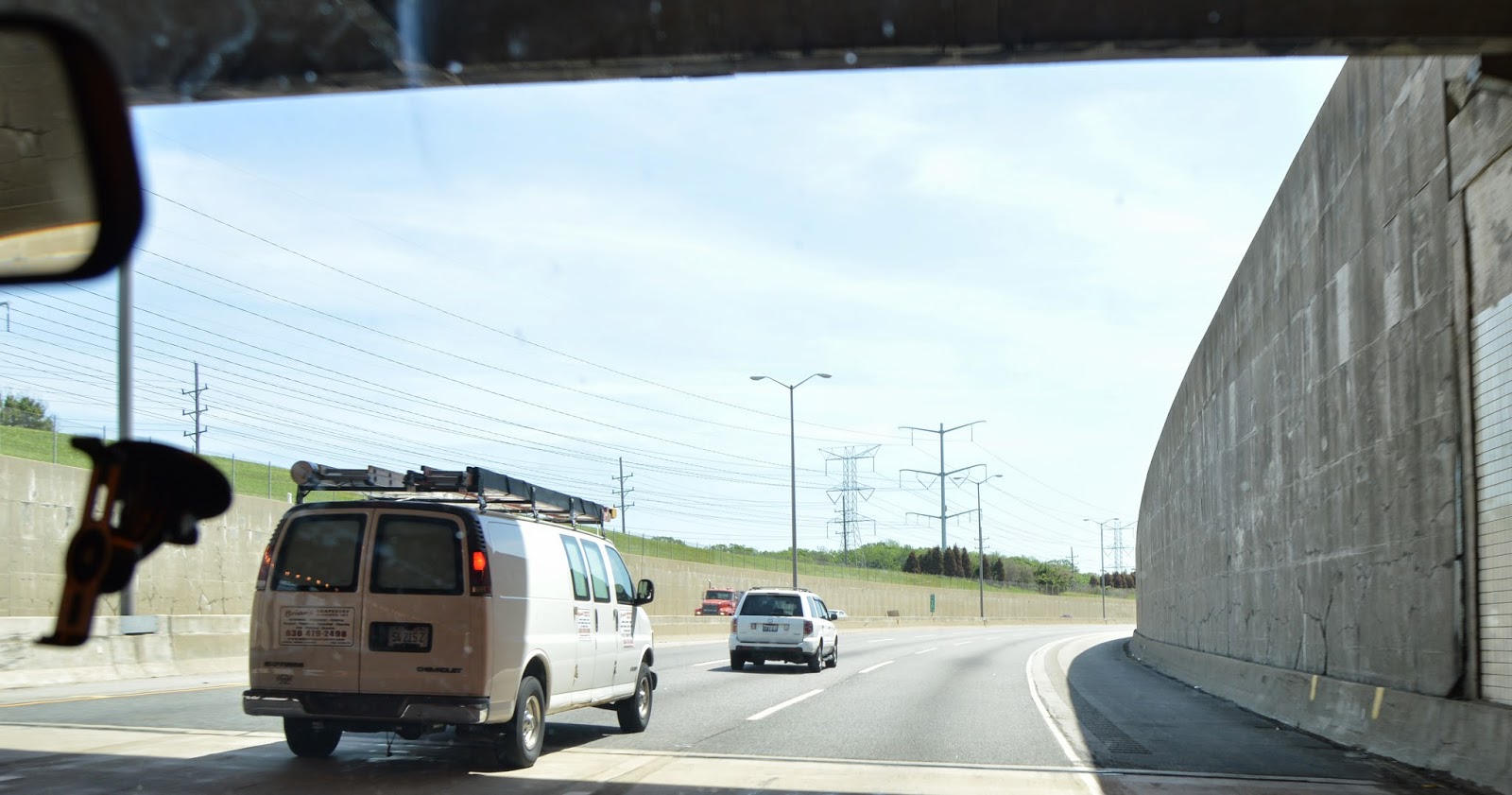 The red truck on the right is westbound on I-88.

And before we get to the Finley bridge, I-355 is back to grade level and next to I-88. Note that they use a higher barrier between interstates than they do between directions for the same interstate. Is it because big trucks would tend to be closer to each other between the interstates?

As you can see at the bottom of the following map, Finley, I-355, and I-88 all curve around to the north.

Beyond the white cab on the right you can see the beginning of the eastbound I-88 to northbound I-355 ramp. After climbing along the retaining wall, it...

...and merges with I-355 (picture taken from passenger window). 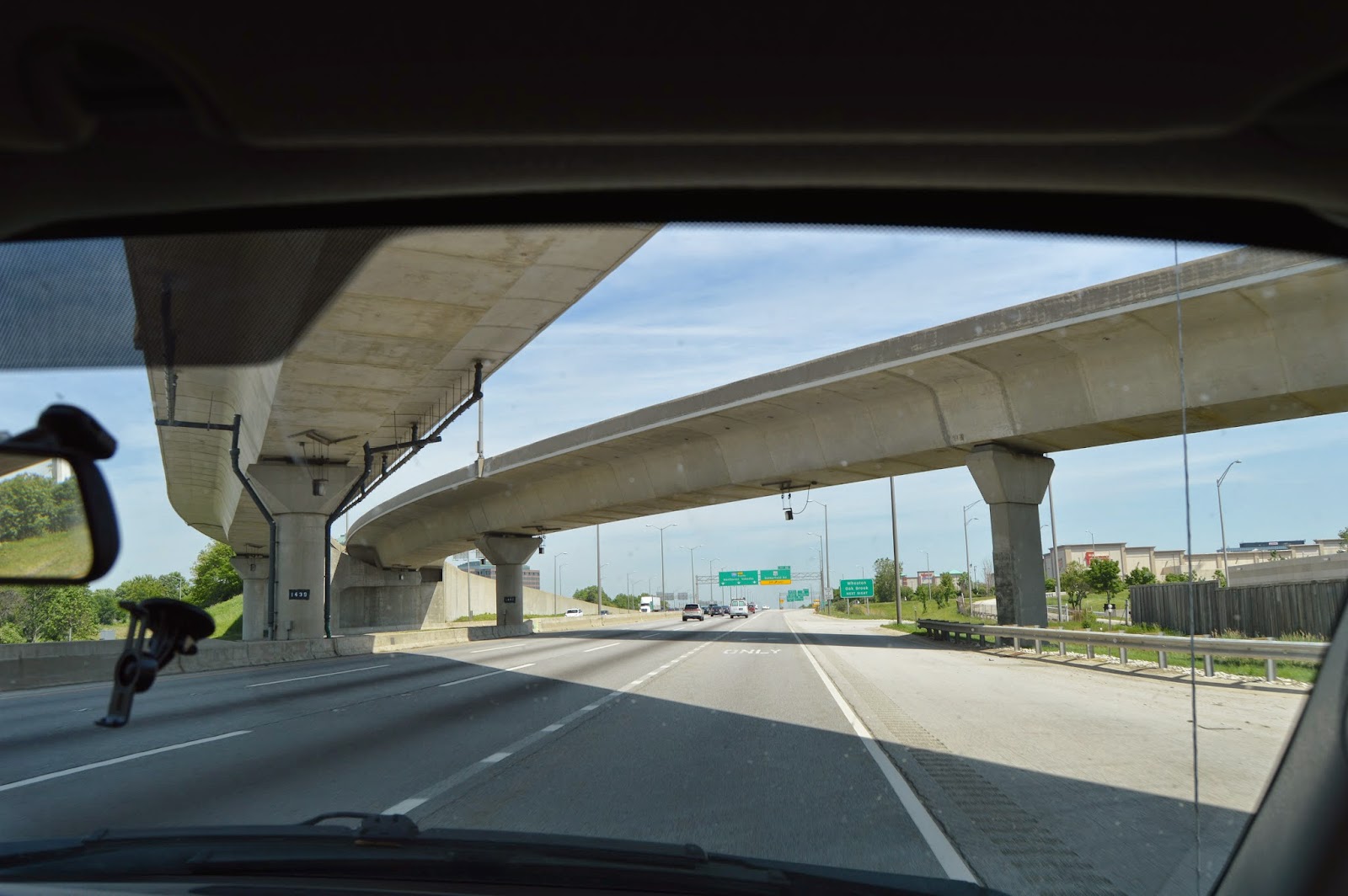 If there was a competition for the most expensive ramp in America, this ramp would be my candidate.


Entering from Butterfield road, we soon encounter the split of the ramp that we see join above. 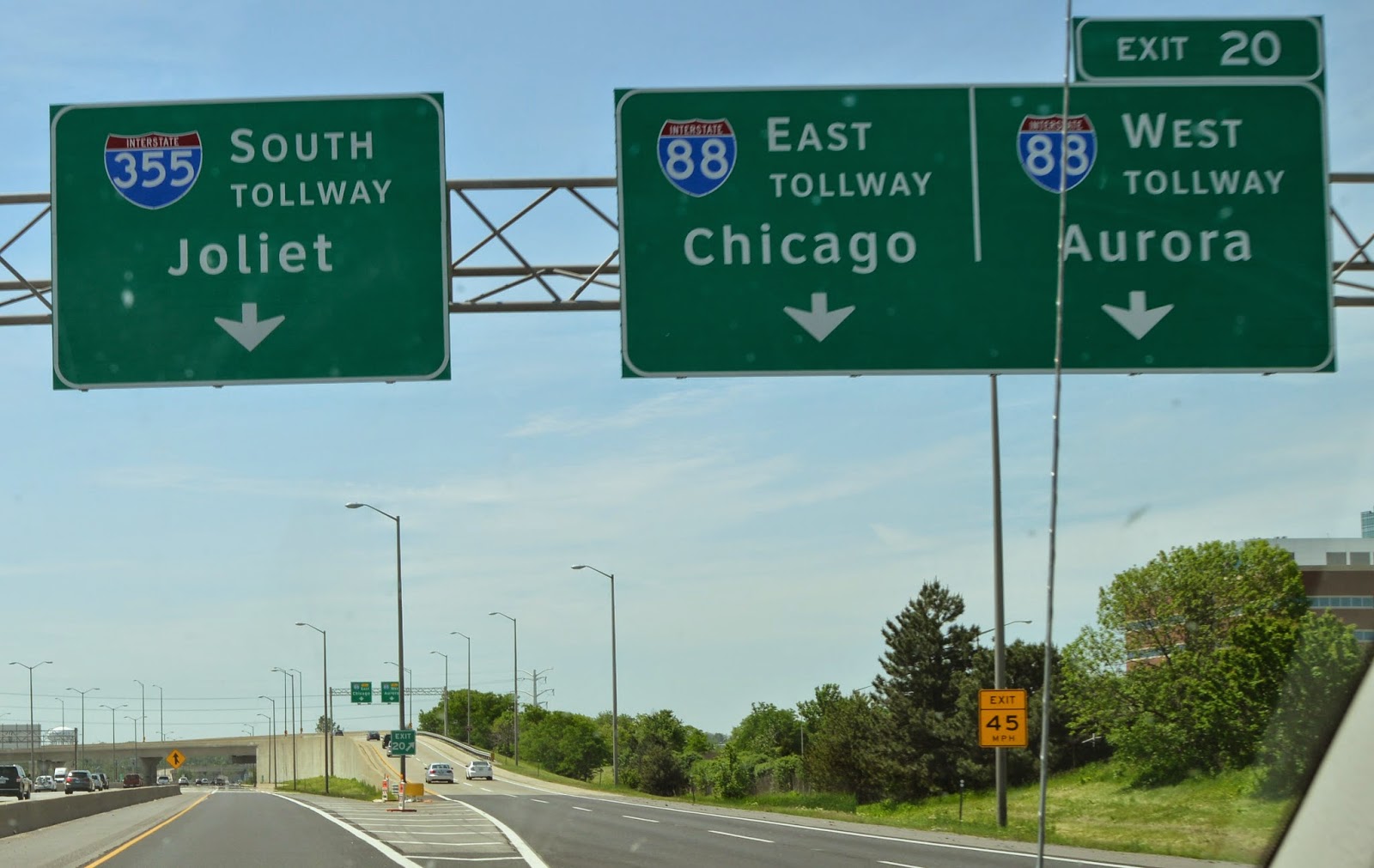 A couple of closeups of the split. Even with the windshield clutter and glare, you can see the trapezoidal box beam construction they used for these "long distance" ramps. 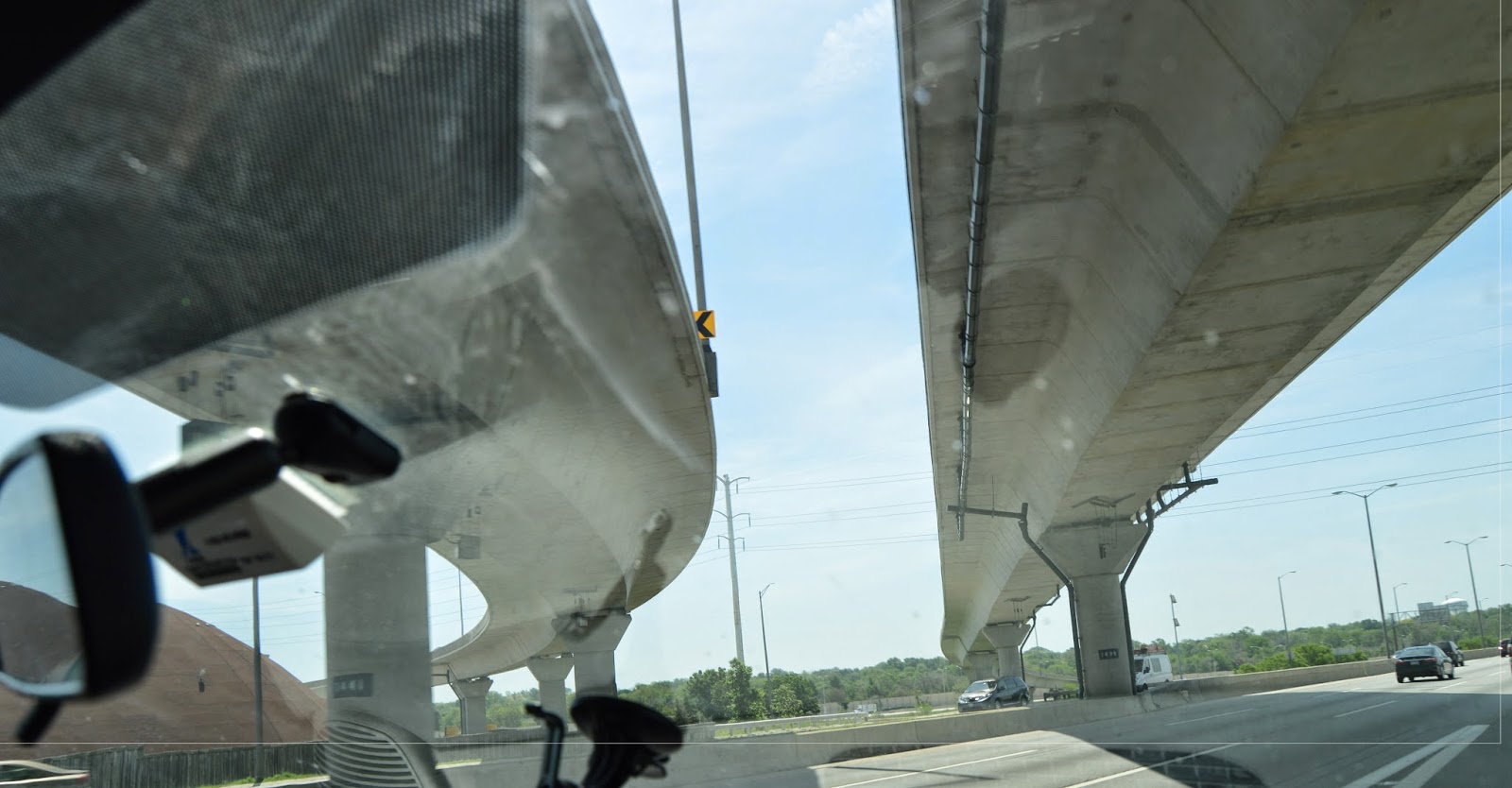 And then we see the merge, fly-over, and ramp of the eastbound I-88 to northbound I-355 ramp.

We go under Finley Road and the power lines join us from the north.

It looks like the retaining wall is not surviving salt spray very well.

Fortunately, the tiles they used under the bridge are in better shape. 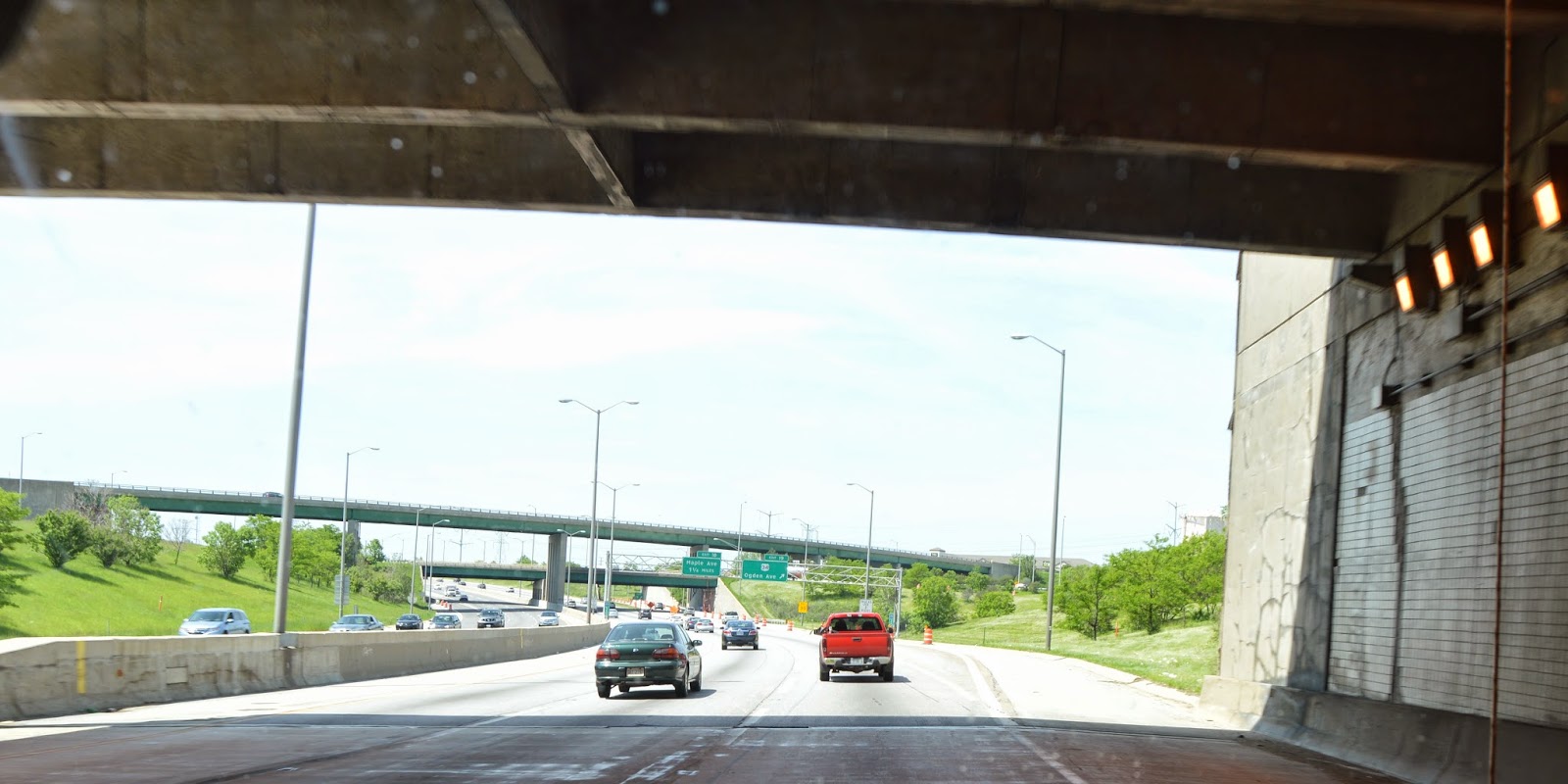 And then we encounter the now familiar Warrenville and ramp bridges and the microwave tower.

A shot out of the left rear passenger window catches the berm in front of the headquarters building.

And the above passenger window shot catches four ramps:
And I-355 remains elevated until after it crosses the CB&Q tracks. 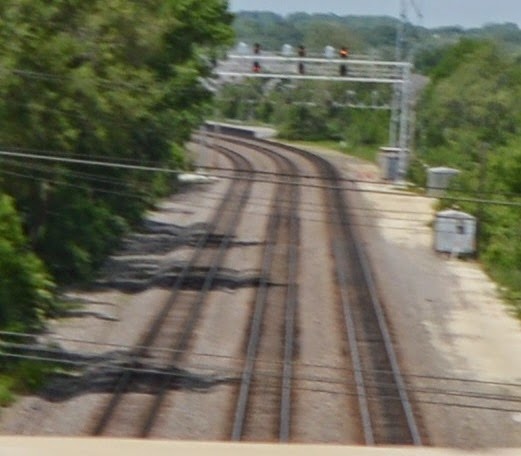 
Looking at those pictures of the Warrenville Bridge made me wonder if it had pedestrian access. I drove over that bridge daily for about two decades, but I could not remember. So on my next trip I checked it out. The answer is, technically, yes.

But, in keeping with the western suburbs hostility towards pedestrians, it is the scariest crossing I have ever seen. No wonder it never registered in my mind as a pedestrian crossing. I don't mind it being narrow, but it has the lowest hand-railing I have ever seen. Below waist high! And on one of the taller bridges. I walked in the bike path unless there was a car coming. Then I stood on the edge of the curb while it passed. When I took the pictures, I kneeled down and stuck the camera between the two rails. There was no way I was going to stand right next to such a low rail with a big drop. 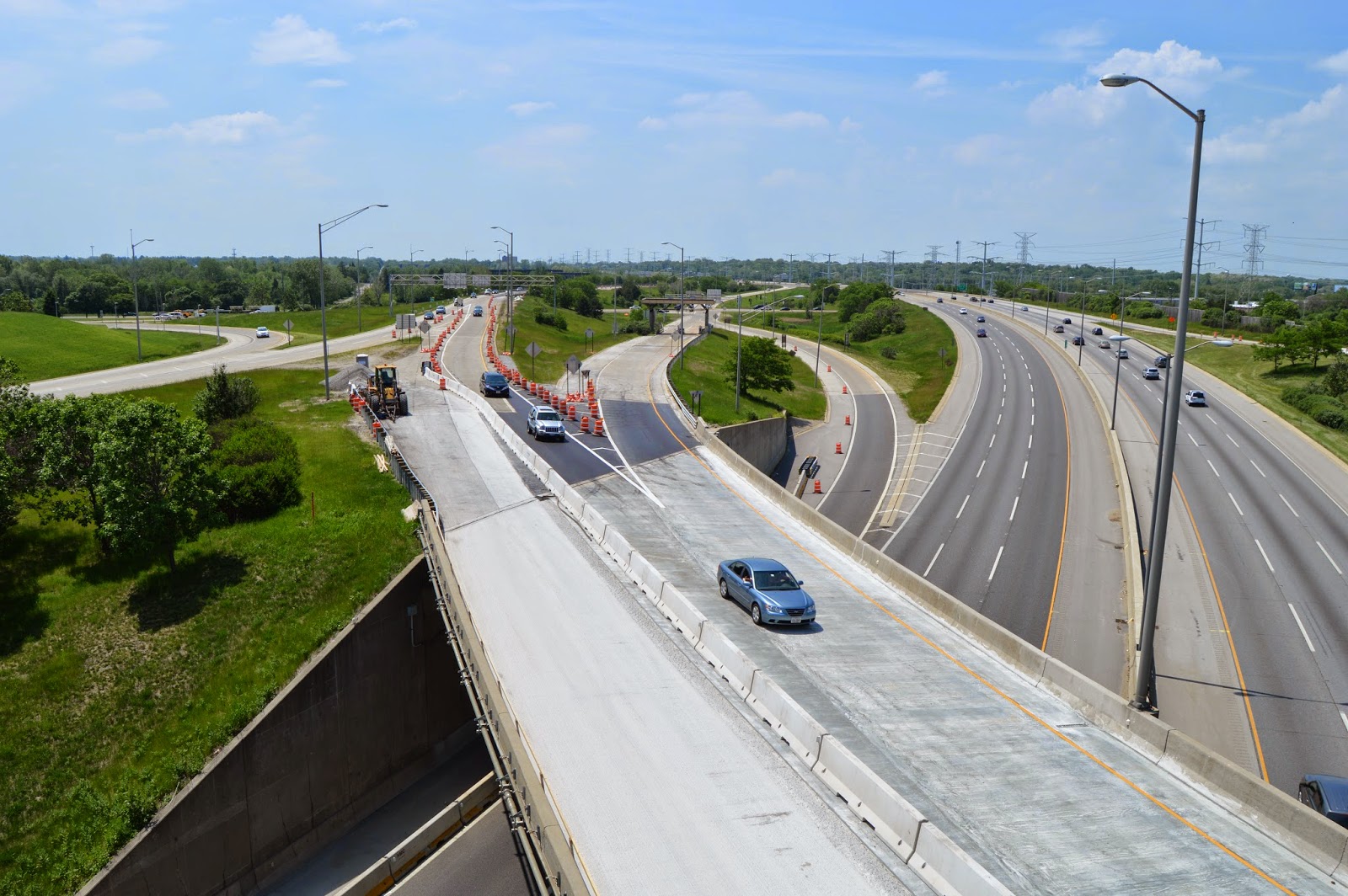 And looking north from west to east. You can use the base of the microwave tower to orient the two views. And notice in the west view that the northbound I-355 plus Ogden traffic to westbound I-88 ramp also goes under I-88. 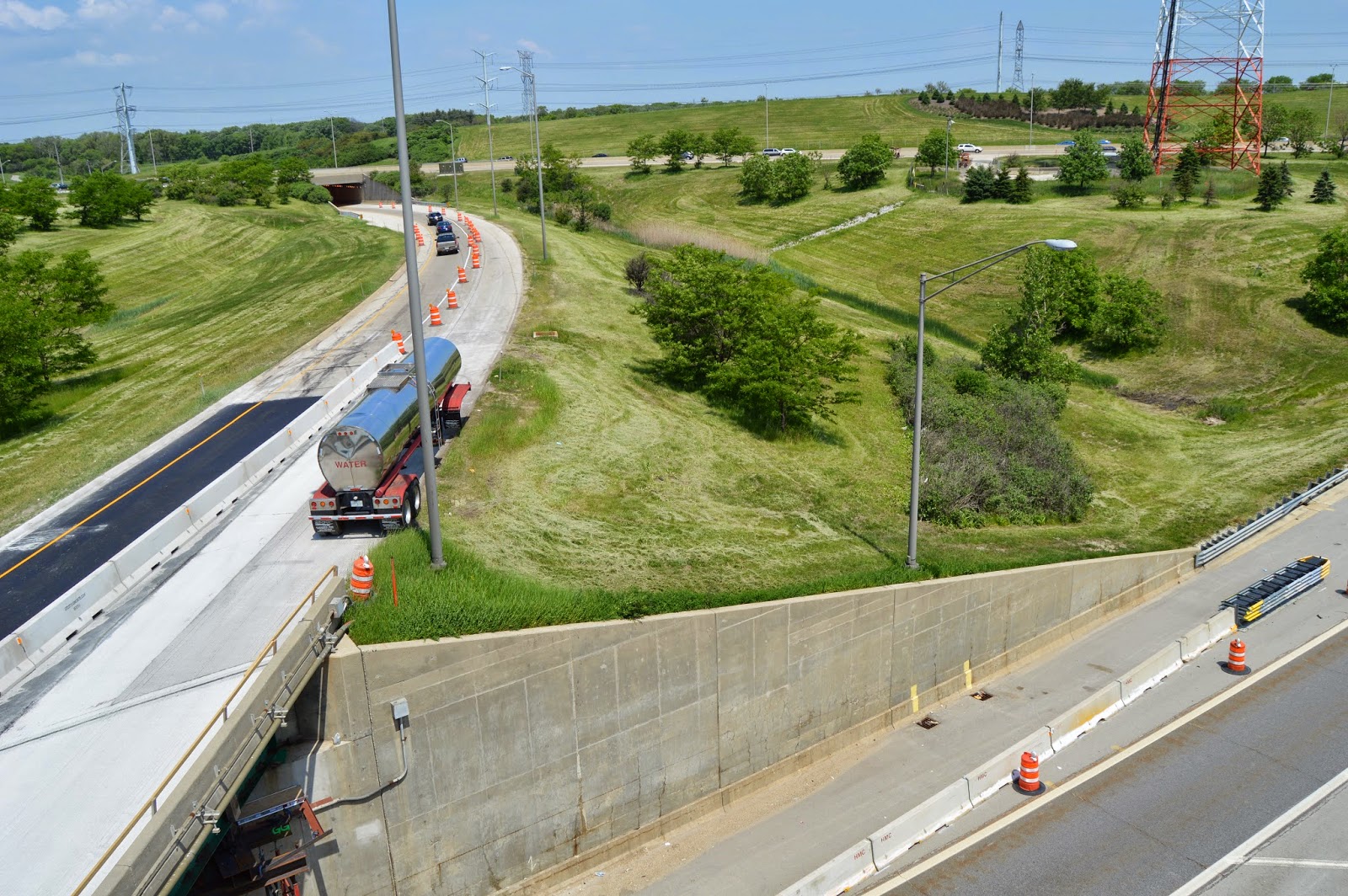 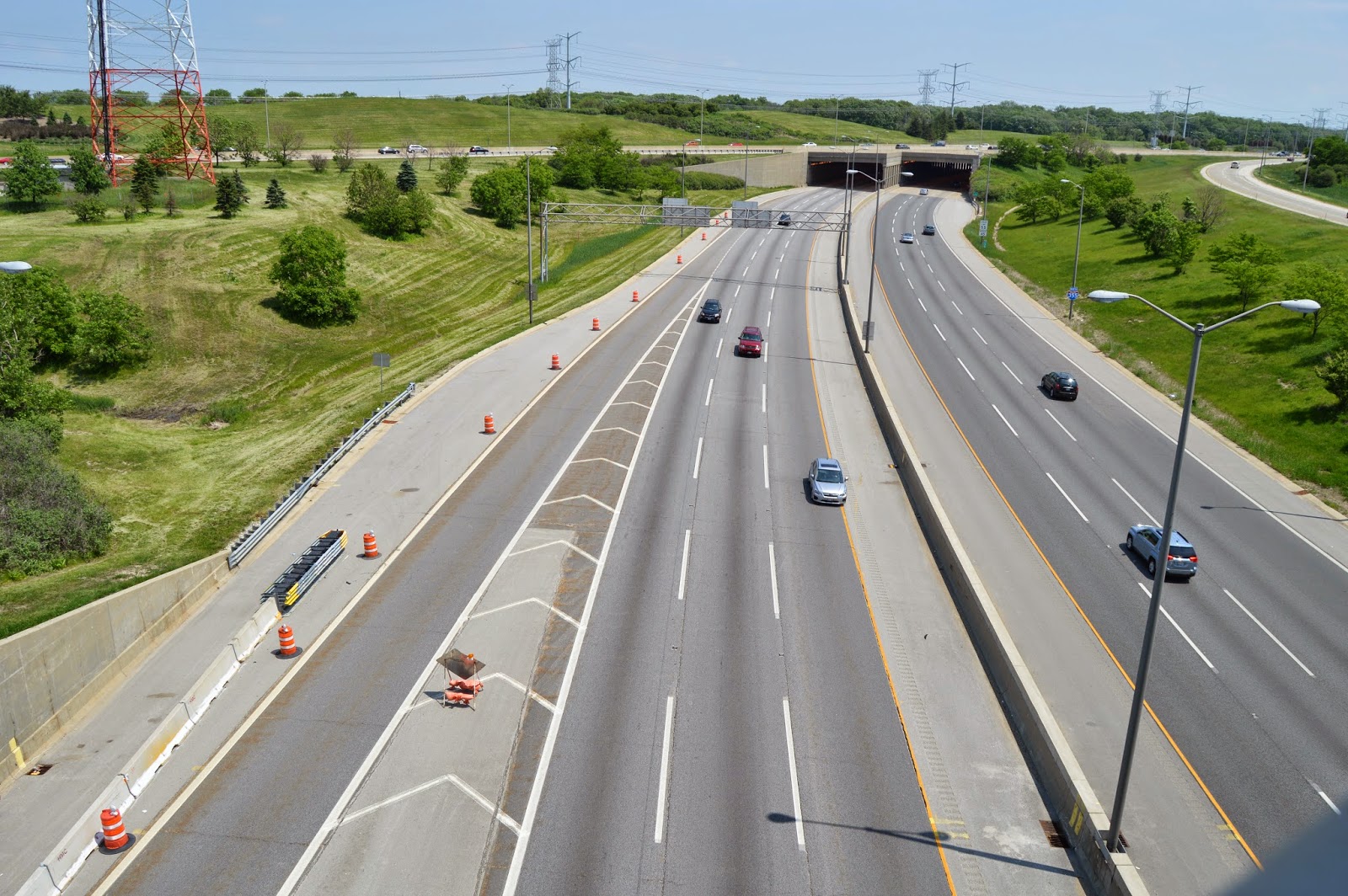 And another southbound view taken while standing up in the bike path (which is lower than the sidewalk) to see if the scariness of the railing can be captured. This was an afterthought, and it is taken from the east end of the bridge. 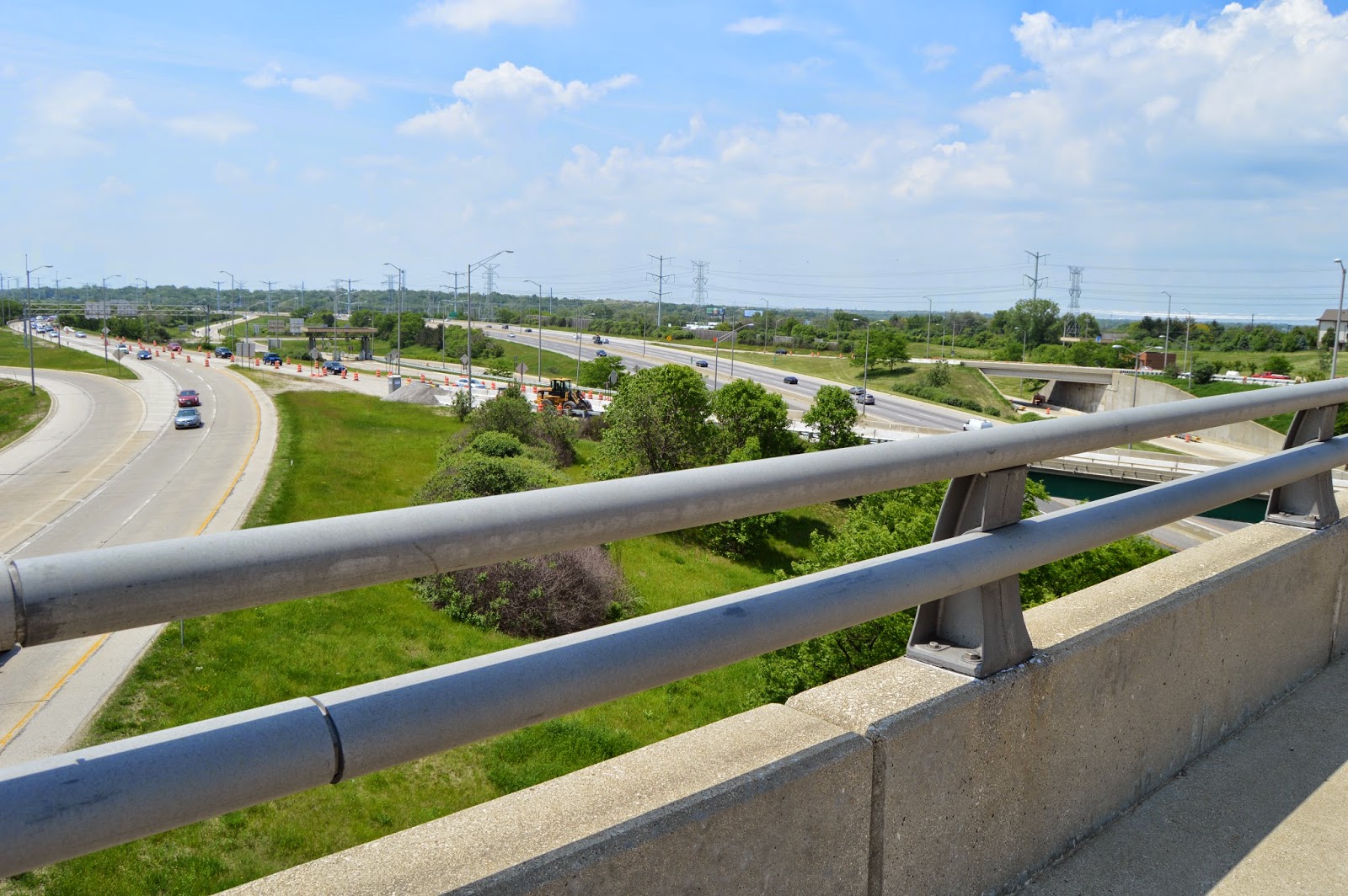 Posted by Dennis DeBruler at 9:38 AM