The original lock was 110x358 (one source said 400 for the length), the same width as the Panama Canal Locks. The current lock is 110x1200 and can handle a standard upper-Mississipi tow of fifteen barges.
Google Map's satellite image has a glitch, but it is good enough to tell a tow is leaving the lock. Bing caught the lock when it was empty and the swing bridge was closed.

A view taken upstream from the lock's visitor center. Note that the gate is not a miter gate. It is opened by being lowered into a slot in the canal bed. 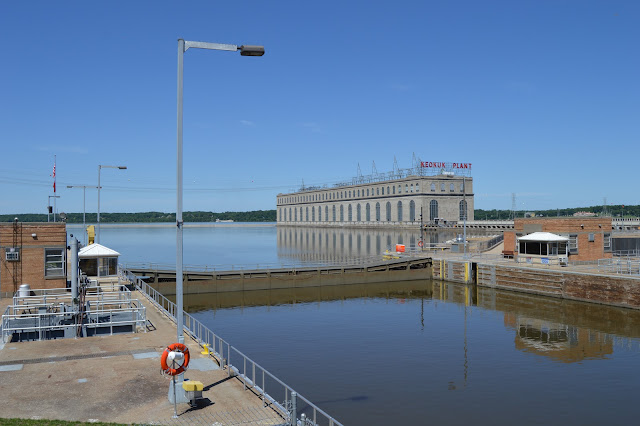 A view looking downstream from the visitor center that also catches a train on the bridge. 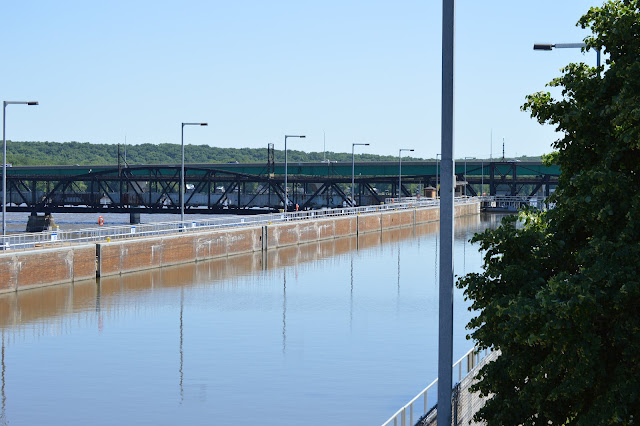 
Keokuk, Iowa Historians Vintage Photo Archive
Circa 1893
THE LOWER LOCK OF THE DES MOINES RAPIDS CANAL AT THE KEOKUK RIVERFRONT
Many years before the construction of the current dam at Keokuk, river navigation between Montrose & Keokuk was hampered by what was known as the Des Moines Rapids.
The city of Keokuk was built mainly on the business of LITERING OF BOATS travelling between St. Louis to St. Paul. Because of the Des Moines Rapids at this location, boats travelling upstream were forced to stop at the port of Keokuk to unload cargo to lighten the boat, the cargo was taken upriver to Montrose by road & the boat, sans passengers & cargo, was then safely able to navigate the rapids slowly. At times this process could take several days, therefore Keokuk needed several hotels to house layover passengers, its stores and restaurants thrived from the business of these passengers. In its heyday before the canal was built Keokuk was considered the most important port between St. Louis & St. Paul. Because Montrose was smaller, and boats coming downstream from St. Paul had to undergo this same process, most of those passengers also opted to come to Keokuk to await the arrival of and reloading of the boats at the Keokuk landing
For many years, the 12 miles of rapids at Keokuk, Iowa, were the northern head of navigation. At high water the rapids were dangerous. At low water, they were impassible. Cargo headed up river or down river had to be unloaded from the boats and carried past the rapids in horse-drawn wagons.
The US Army started to clear the Mississippi River as early as 1829. Lieutenant Robert E. Lee ran a project from 1831 to 1833 to remove snags and blast the largest rocks in the rapids. While this made running the rapids a little less risky, it did not solve the problem. A canal would be the solution, but that would have to wait until after the Civil War was settled.
The Canal envisioned by Lee was approved and construction started in 1866. The canal was built along the west bank of the river. Starting at Keokuk, a wall was built 8 miles long to create a river channel that was independent of the main Mississippi River channel. This channel was deepened, and three locks were installed, with the upper lock at Nashville, now Galland, the guard lock & drydock at Price's Creek and the lower lock at Keokuk. This section of the canal opened to river traffic in 1877. A further 4 miles of canal was built south of Keokuk down to the Des Moines River. This was accomplished by blasting the bedrock to create a deeper channel along the west side of the river. This part of the canal was not separated from the main river as the upper portion was. The canal featured an overall depth of not less than 5 feet.
The Des Moines Rapids Canal was in operation for 36 years. Increasingly large river boats were too big to fit in the canal locks, and ever heavier barges required more than 5 feet of water depth. Congress responded by approving the 6 foot navigation channel plan. The result was the huge dam, the monumental power plant, and new Panama-sized lock that opened in 1913. Much of the old canal was destroyed and submerged when the new lock and dam opened. This structure is largely in place today. The major change is that the Panama-size lock was too small once Congress approved the 9-foot navigation channel plan. It was replaced with the current 1200-foot long lock in 1952 -1957.

Tapati McDaniels Interesting glimpse into the potential that was expected of Keokuk and how various factors diminished it's prospects of becoming a larger city. Much has to do with transportation changes, both passenger and freight. Changes in manufacturing was the final blow.
I hope fortunes change again so Keokuk can finally realize its potential.

This upper gate is like the one in the Lockport Lock in that it goes up and down instead so I took seven snapshots of it coming back up. Unfortunately, I left the mouse on the other screen and by the time I discovered my mistake, they had already let the water out of the lock. I did get a couple of shots of the dewatering that shows the water turbulence on the downstream side of the gate. I'm including both of them because they show the chaotic nature of the turbulence. These were taken at 4:38. 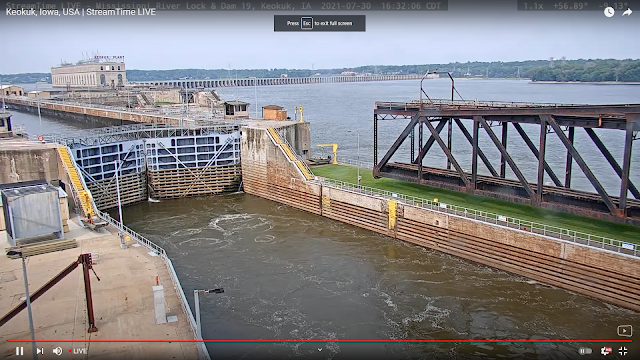 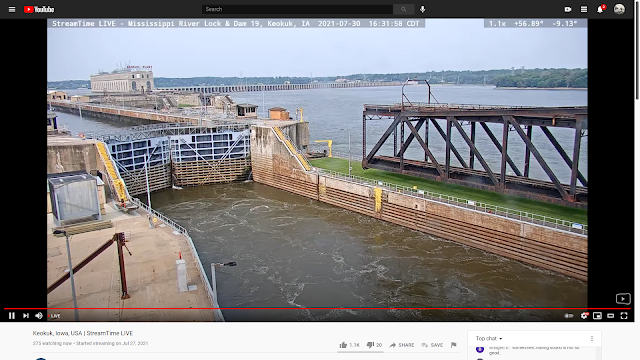 The next upbound was waiting. He got the whistle at 4:42. This shows why they come in at an angle. If they were straight, the rear end of the tow would be out in the river's current. 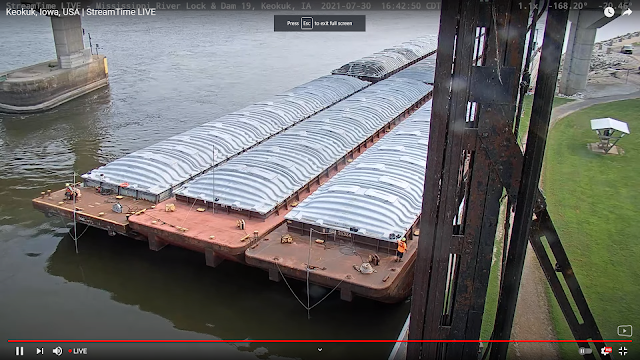 Another view of the river's current. 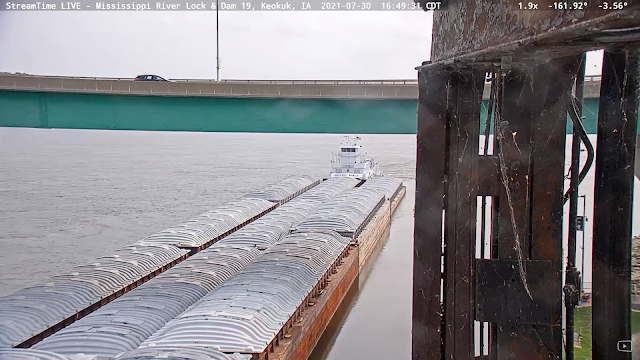 I now understand the livestream comments about they come in at an angle because the lock is at a curve in the river.
Around 5:10 the gate moved about 6" (they had a closeup in anticipation of the gate closing) and then stopped. A guy came over and looked at the end of the gate. And then they opened the gate back up. At 5:15 we see a worker in the vicinity. He had gone down some stairs over there. 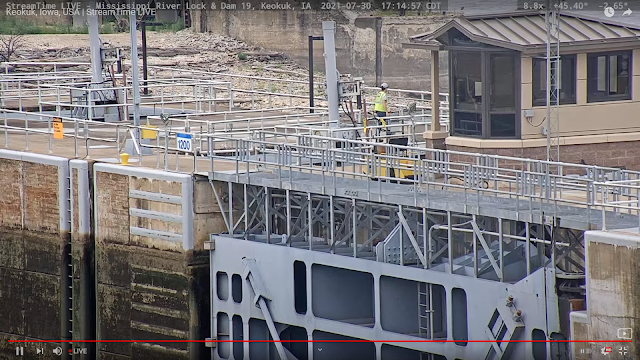 At 5:17, it went back out a few inches and then came back in. At 5:24 it finally started opening. It was open at 5:28. And then the guy drove out on the gate again. But he left after just a minute or so this time. And it started going up soon after. 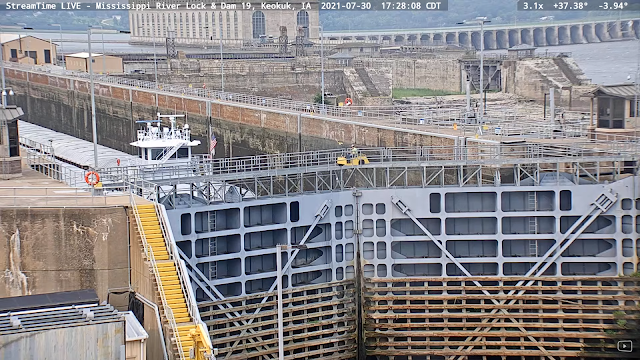 Others have wondered about the propwash while it is setting in the lock.
"mevinson ​terryesh, The props aren't turning, that is the cooling pumps for the massive engines!"
This towboat kicked up a lot bigger propwash when shoving out than the other one did. This is what I expected to see from the other one. 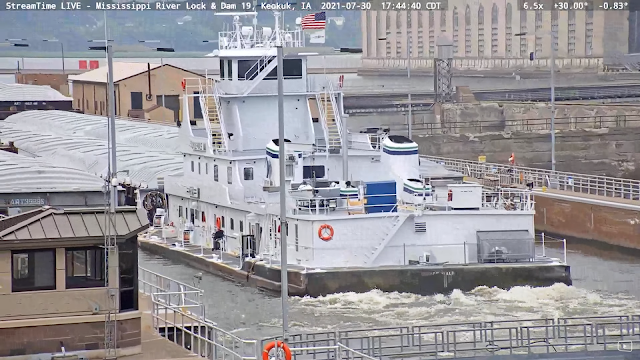 I got the gate shots this time. It was up by 5:52. I preferred the camera operator for the first tow compared to the second. 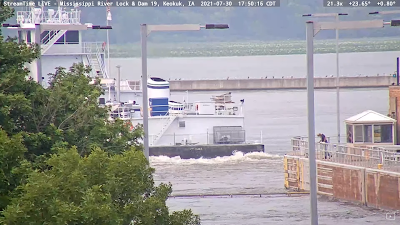 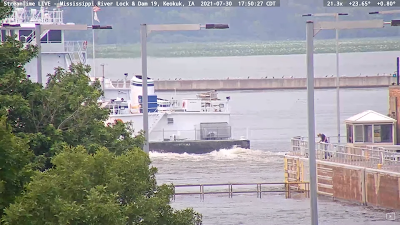 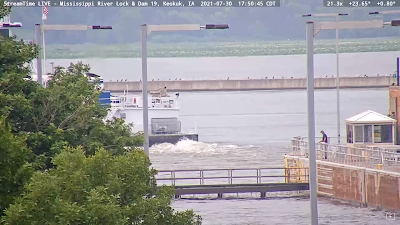 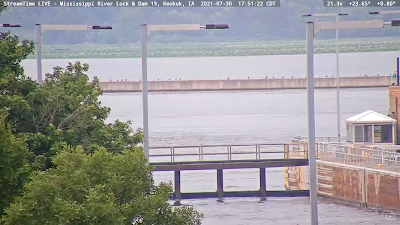 At  6:03 the gates opened for a upbound cabin cruiser. 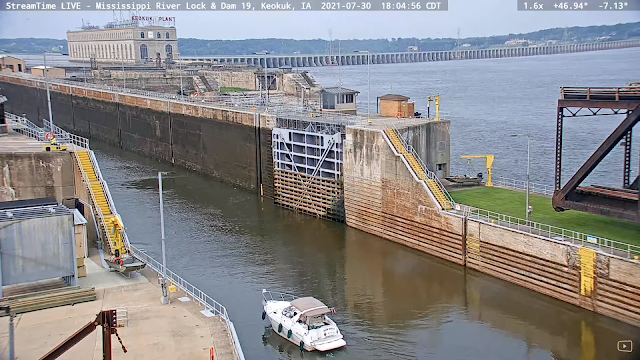 And another one arrived in time to share the lockage. Is this designed to be a house boat that gets decent mileage? They waited until 6:10 before closing the gates. A different person answered the "how long to fill?" question with 20 minutes. 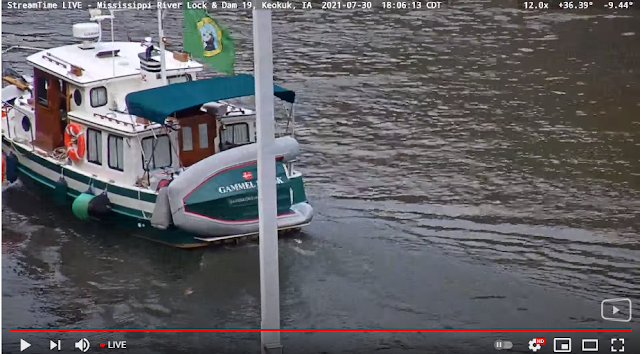 Since the boats were not visible, this time we got a view of the vertical lift gate. 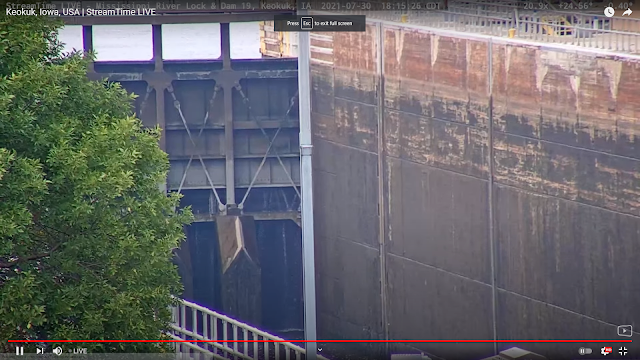 So they sometimes do put a barge on the hip.
Posted by Dennis DeBruler at 7:53 PM