I labeled this rrMisc as well as rrPenn because several railroads used it. I also labeled it bridgeTruss as well as bridgeCantilever because I might forget that it has cantilevered spans.

There is a river bluff close to the river on the west side, but on the east side there is a long approach trestle. So I also labeled it bridgeTrestle because of the long trestle approach on the east side. That approach is bigger than many complete bridges.


Linking Highland with Poughkeepsie NY, the Hudson High Bridge is one of the most incredible pieces of railroad infrastructure on the East Coast.
Completed in 1889 at almost 7000ft in length, rising over 200ft from the river, it was built to serve the New Haven Railroad, before falling into the hands of Penn Central, then Conrail. The last train crossed in 1974, after which a fire caused damage to about 700ft of decking. A decade later, despite federal funding, NY State funding, and an offer of additional funds from Connecticut to repair the structure, Conrail formally abandoned the bridge, along with the rest of the Maybrook Line in 1984.
Today the bridge is used as a pedestrian crossing, known as the Walkway Over the Hudson.

Matthew Moretti Very cool photo. It was actually built by the Central New England Railroad which was eventually merged into the New Haven. Interesting fact, the first train that operated over that bridge was hauled by the same locomotive involved in the bridge collapse accident in Tarriffville CT a few years before. It was repaired and returned to service.
Wayne Wanzor Prior to the closure, it was the only rail crossing of the Hudson between NYC and the Albany area. It’s closure created a rail bottleneck at Selkirk which reduces rail capacity for trains from New England heading southward.
Troy Nolen It didn't create any rail bottleneck. Penn Central, who owned the bridge when it burned, was only running 2 trains over it each day, one of which was an Erie Lackawanna transfer freight. PC was trying to route trains via Selkirk because it was more efficient given the low amount of traffic and a dismal future for the line, they were looking to abandon it anyway. There was some speculation that PC actually started the fire, which was a popular thing to do at the time, burn bridges and then abandon lines... happened VERY frequently in the 70's.
James Teehen I have lived in Hyde Park NY just north of this bridge for 29 years. For many years the bridge was in its abandoned state. During the 90s and early 2000s there were many ideas for developing it. They ranged from building a shopping mall on it to reopening it for commuter rail service. In the end the walkway was chosen. It is a nice addition to the region. As far as rail service is concerned the bridge became redundant with the inclusion of the NH into the PC. The whole purpose of the bridge was to give the NH a connection with the many railroads that served Maybrook NY. However when you add Conrail to the scene all of the railroads that served Maybrook were now part of Conrail. This situation ended any possibility of restoring rail service to the bridge. This is a reality that we have witnessed many times in business and technology.However I do have one concern for the Poughkeepsie Walkway Bridge. At some time in the future the steel should be scraped and painted like any other bridge. Because this has not been done in many years it may be an expensive project. 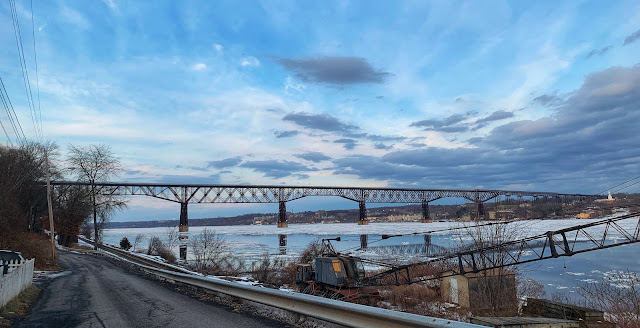 
Niel F Davis posted (source) four photos with the comment: "The NYNH&H Railroads High Bridge at Poughkeepsie Ny , it was the NYNH&H Railroads Gateway to the west, it lead to their other big yard at Maybrook Ny , it’s now a hiking trail."

Posted by Dennis DeBruler at 12:22 AM