ChiLandmarks has two photos and the text:

The Chicago, Milwaukee & St. Paul Railway Bridge No. Z-2 is a rare asymmetrical "bobtail" swing span bridge from the late 19th century. Its significance lies not only in its design, but in the role it played in the historic development of Goose Island, carrying the only rail line to the island. In addition, the bridge once carried limited vehicular traffic, making it perhaps the only surviving bridge in Chicago that served combined modes of transportation. The bridge's superstructure is made from 210 tons of steel, with a concrete counterweight weighing 140 tons all of which rest on a circular nest of 40 wheels that support the entire weight of the bridge. When in operation an electric motor engaged the gear mechanism, forcing the span to rotate and swing towards the shoreline. The bridge owes the necessity of its existence to a canal built by William Ogden, Chicago's first mayor, who was the primary backer for its construction in the mid-1850s. The canal allowed the island to function as an industrial core for Chicago, with tanneries, grain elevators, a coal yard and steel mill. Today the bridge's operating mechanism has been disabled and since larger craft no longer use the waterway, the bridge remains locked in position. In 2009, the bridge was restored by the Chicago Department of Transportation and pedestrian and bike paths were installed on the span to connect North Avenue to Goose Island.

Milwaukee Road built Z-2 in 1902 to provide rail service for the heavy industry that was on the island for a significant part of the 20th century. As my daughter drove me East along North Avenue, I grabbed these pictures. Chicago Terminal Railroad uses this rail so infrequently (video1, video2) that this bridge is now shared with pedestrians and bikes. The author of the first video extracted a still on Flickr of a single empty lumber car heading back to C&NW yards for interchange. That is because the only remaining rail-served customer on Goose Island when I took these pictures was a lumber yard near the south side of the island. Since then, that lumber yard quit using rail service. The bridge was rehabilitated in 2009, so hopefully it will remain as a pedestrian and bike crossing. 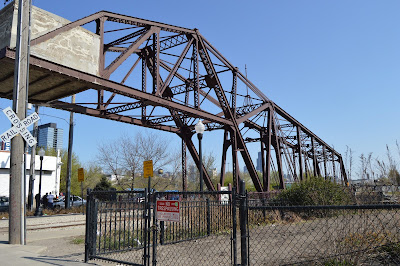 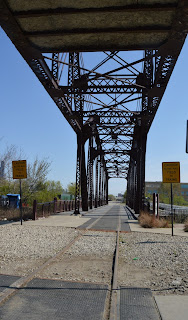 I learned during the May 2015 trip that the weekend traffic is light on Goose Island except for Division Street. So I had planned to go back but take I-94 to Goose Island, park on Goose Island, and walk around this bridge. So I took advantage of a mild December Saturday to get some more pictures. It was a cloudy day, but sometimes I think diffuse lighting is better for taking pictures of truss bridges.

I parked where Cherry Street dead ends near the bridge. You can see the bridge in the background between the SUVs. The track curves from running along the side the road back to running on the old street's right-of-way.

Note the North Street Bridge in the background. The double tension members near the end of the span is probably because the loads on the trusses are different when the bridge is closed and being supported by the bridge abutment vs. when it is open and being supported by the counterweight and pier. The bridge needs to be stronger when closed to support the weight of a train going over it.

On the north side they built a special viewing area that lets you see the pier.

Unfortunately, every time I lean over a rail to take a picture, it comes out crooked. Nonetheless, you can see this is a bobtail swing bridge. That is, the pier is on a bank and a 140-ton counterweight leveraged by an overhead offset span is used to balance the 120-foot span over the river. You can see some of the 40 wheels that allows the bridge to turn on the pier. 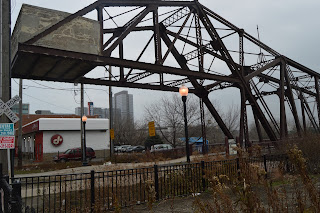 The is the overhead offset span with the counterweight. 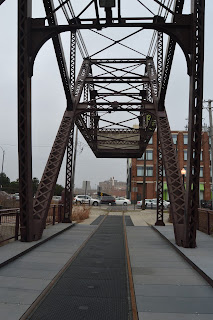 A view of the offset span from inside the bridge. The cars are on North Avenue, and it is always four lanes of bumper-to-bumper traffic. One of the videos shows a crewman had to get off the engine to stop that traffic because a loud horn and bit locomotive was not intimidating enough to convince the drivers that they should yield to the "train." (It had just two cars.) 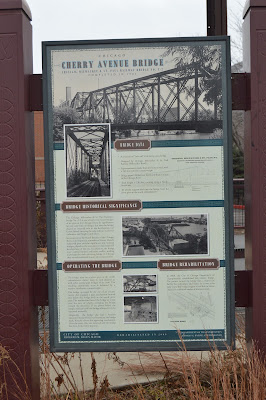 Most of the factoids in this sign I have incorporated into the narration. At the bottom of this posting is the detail in the lower-right corner of the sign. They should have used a blacker ink for the sign. 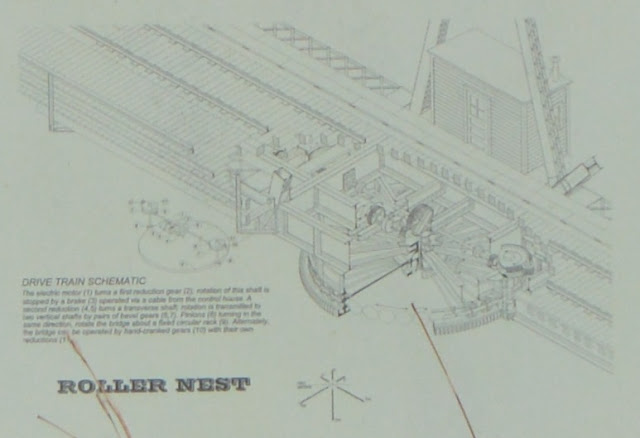 Rob caught a clear view across the road as the private rail car Caritas was being pulled off the island.

Posted by Dennis DeBruler at 2:11 PM