The first image is a 3D Satellite view of a former headhouse for a grain elevator in Harvey, IL. The second image is from a 1938 aerial photo that shows it used to have ten bins. The railyard is along a GTW route that is now owned by CSX because they bought it from CN. The tracks along the left side of that image were for the IC, and they are now owned by CN.

I learned of this elevator from the following post. 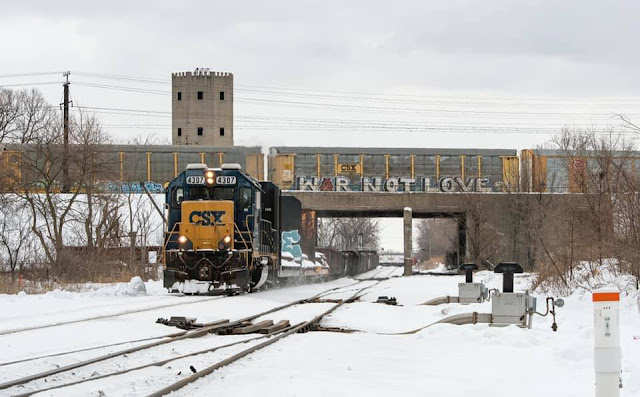 Jacob Diorio posted
CSX 4307 heads west under the IC at Harvey with Y126, about to get on the Chicago Heights Sub at CJ. 4307 is a rare bird, being an ex-RDG GP39-2. 2/11/21
The cars on this train were supposed to go to LB Steel in Harvey and Quality Metals in Dixmoor but all the switches were completely snowed over.
Dennis DeBruler
What was the octagon tower in the background?
https://www.google.com/.../@41.6097346,-87.../data=!3m1!1e3
Jacob Diorio: Dennis DeBruler used to be a grain elevator served by the IC. Not too much is known about it but nowadays it’s nicknamed the “Hobo Castle”
John Diorio sent me two more photos:

Yet another railfan photo with the "castle elevator" in the background
Posted by Dennis DeBruler at 8:25 PM