A lot of ship fans made an effort to catch the last of the four bridges that went up the St. Lawrence Seaway, so I saw quite a few photos of the barge in transient. And my daughter and son-in-law took some photos for me when they visited a friend in Toronto. Please see Villers Island for an overview of the project. These notes focus on transporting the bridges from their fabrication in Dartmouth, NS, to their final destination in Toronto, ON.
Note that the first part of the trip is in the open ocean. When they are in a big body of water, they use a long towing line because the line absorbs the movement of the barge caused by waves and because there is plenty of room for the barge when it moves side-to-side. In channels, they shorten the line because they don't have to worry about waves, but they do have to worry about reducing the side-to-side movement. Of course, the line is the shortest when they are going through locks. Also, another tug is used on the rear when going through narrow channels. This is a timelapse video of the trip for the first barge. It clearly shows how the length of the tow line is changed as the body of water being traversed changes. (I have not been able to identify this bridge.)
The rest of these notes focus on the transit of the fourth, and final, bridge.

Janey Anderson posted four photos with the comment: "Pilot boarded Tug BEVERLY M1 with the next Toronto Bridge piece on GLOVERTOWN SPIRIT barge in Halifax at 22:00 tonight -  and they departed for Toronto. 06.25.22  Photo Credit: Glynn Johnston"
Tom Goodyer shared with the comment: "Here we go Folks."

Janey Anderson posted four photos with the comment: "It's THAT time again Ship Junkies. Pilot boarded Tug BEVERLY M1 with the next Toronto Bridge piece on GLOVERTOWN SPIRIT barge in Halifax at 22:00 tonight -  and they departed for Toronto. Stay tuned for more updates to come! Photo Credit: Glynn Johnston"
Carl Durocher: Nice pictures, is this the last part. How long is the piece you are transporting?
Glynn Johnston: Carl Durocher last piece and about 200 ft long approximately.

Lorraine Mirrill posted five photos with the comment: "New Bridge  a comin'  Tug Beverly MI with the barge Glovertown Spirit upbound at Sorel, QC 6/30/22. The barge is carrying another new bridge, built in Nova Scotia, for the Portlands in Toronto."

Touchdown
The third bridge span was safely delivered earlier this week and loaded to land in Toronto!
This time the bridge was delivered via the Beverly M and it’s crew along with the barge, Glovertown Spirit. Thanks to the crew and project managers for another successful voyage 👏
We are honoured to be part of a project that will one day create a gateway to a new island in Toronto protecting against future floods, while also providing residential, commercial and recreational opportunities.
📸 @lanimaritime & Captain Glynn

Joan Simple posted three photos with the comment: "Things just worked out today & we got to see the arrival of the final bridge at the Port of Toronto. Fourth one's a charm…the tugs really nailed the delivery, it all seemed to go like clockwork. This one will twin up with the first arrival on Cherry Street, which was delivered way back in the fall of 2020." 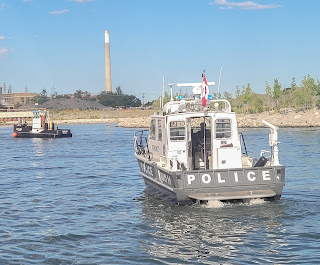 
This is the South Cherry Street Bridge. Since they installed it before the new river channel connected with the existing slip, they could work on dry land for this one.
Chris Kirby posted a video and several photos of placing the bridge onto its temporary piers so that they could remove the barge with its bridge support beams. The last two photos (4 & 5) were obviously taken from the barge as it moved away from the bridge.


Again, from a ferry ride on July 8, 2022. Both bridges are at North Cherry Street. The first bridge transported is behind the fourth bridge transported, which is still high i[ on its temporary piers.
Another view of the South Cherry Street Bridge. The narration of one of the project videos referred to the crane as the "historic Atlas crane." It is being preserved in a new park as "industrial art."
In this view, the fourth bridge transported is on the right and the first bridge is on the left.
This view catches both the North and South Cherry Street Bridges and most of the Atlas Crane.
More about the Atlas Crane.
I hope this is a permanent link to a post by globalexpress because it contains four photos of the crane. If it isn't permanent, the post of interest was made on May 23, 2021, and I saved the second photo below along with his general comment.
Speaking of the park. The "Atlas Crane Peninsula" will be next to a cove designed for use by canoes and kayaks.
Posted by Dennis DeBruler at 8:55 PM