East Channel: (Bridge Hunter; Historic Bridges; John Marvig; Satellite)
West Channel: (Bridge Hunter; Historic Bridges; John Marvig; Satellite)
These bridges carry the BNSF/CB&Q mainline over the Fox River. An abandoned bridge for an industrial spur is just upstream from these bridges. And the Fox River bridge for the IR/CB&Q Streator Branch is downstream of these bridges.
A photo of the downstream side of the West Channel Bridge from a trail bridge.
An "artsy" photo, but it is more useful as a memory aid photo to remind me that I shot it from the trail bridge. 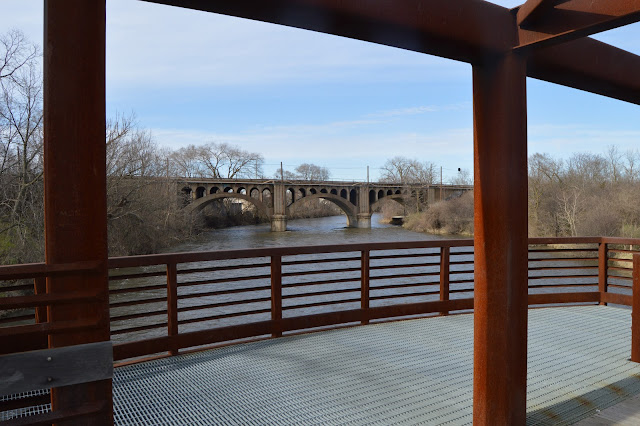 I had a hard time finding a clear view of the bridges because there are trees along the shores of Hurds Island. This is the East Channel Bridge. Note some leaves of the trees are in the river. I made this field trip because the local rivers were running high.
This is the West Channel Bridge. Note the river was almost on the trail. There were parts of Hurds Island that were under water. In fact, the drive to the parking lot on the island was closed during this trip. 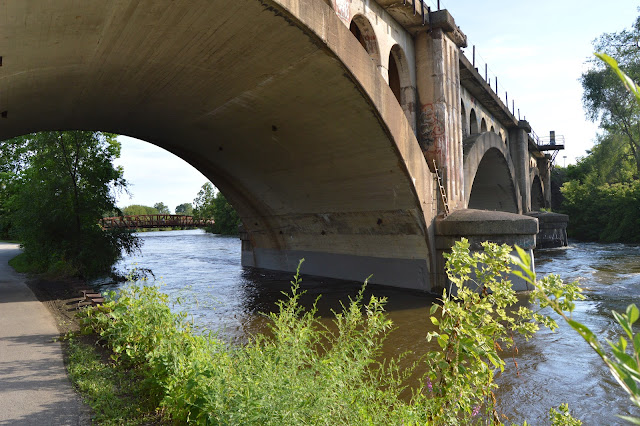 HalstEd caught the river during a more normal flow. Note the extensions on the north side of the pier. They were covered in my July 25, 2017, photo because of the high river level. The extensions must be more than just ice breakers. I presume that they help the current in the river to use the east and center parts of the river rather than pile up against the west bank and cause erosion.
Note that during the Apr 1, 2017, trip the river level was right at the top of the extensions. I was able to park on Hurds Island during this trip. (I don't know why the exposure is so dark. Did I catch a lot of glare off the river?)
Since the leaves were still off the trees, I got a little more of the East Channel Bridge. 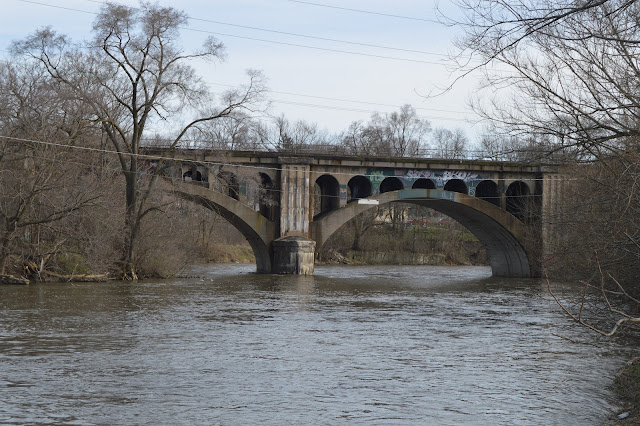 On the July 25, 2017, trip, I caught a train going across the East Channel
The train continued to roll across the bridge as I walked on Hurds Island from the east side to the west side. Note the water under the swings because the river was running high. 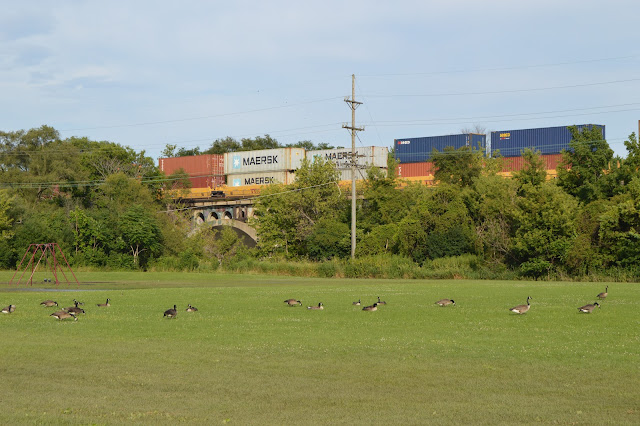 Chuck Pfeiffer posted two photos with the comment: "Saw this parked on the Fox River bridge just south of downtown Aurora earlier this week. That's a horrible spot to park. The bridge has crumbling concrete."

Posted by Dennis DeBruler at 11:52 PM