I used Erie*C&O in the title because they shared joint trackage from Griffith and I was running out of punctuation marks. Monon joined the Erie*C&O corridor at Douglas east of Lyman. Note the Monon Trail joins the Erie Lackawana Trail here.

Hohman Ave. did not have an overpass back when six railroads used to cross here!

Once again, I'm reminded that the Bing map has older images because the tower is still present on their map.

Update:
As an experiment, I checked if the new Bing map software still has the old images. Fortunately, it does. When they asked for feedback, I asked for an option to turn off the labels. I don't know if I'm the reason why, but you can now turn off the labels. I also asked that if they ever update the images they include an option that allows us to go back to the old images. We shall see how that goes.

Don Wetmore posted two photos with the comment: "IHB at Hohman Ave Tower in Hammond, IN on June 27, 1987.   Photos by Don Wetmore."
Don Wetmore shared
Dennis DeBruler commented on Don's share with the 1934 aerial photo:
There used to be six railroads through this junction. Today we have the NS/NKP going north/south and the IHB going east/west.
https://www.google.com/.../@41.6207719,-87.../data=!3m1!1e3
This image is from a 1939 aerial map.
To the west of today's NKP tracks were tracks shared ty the Erie and C&O. To the west of those tracks was the Monon. So we had four north/south railroads.
To the north of the IHB tracks were the Michigan Central tracks.
If Monon and MC were also double tracked, that would be 4 x 6 = 24 diamonds. At least none of the tracks were curved like they were in the 21st Street Crossing.
And it appears that Homan Ave. and Willow Ct. were at grade level while Sibley St. was elevated.


Mike Breski posted a couple of pictures with the comment:


• Towers along the Indiana Harbor Belt •
Hohman tower shortly before it was closed in 2001
The tower two years later with windows smashed. Preservation efforts by a local rail
group were unsuccessful and the tower was demolished in May, 2011. 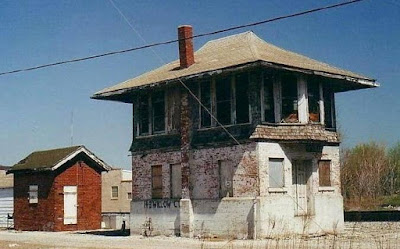 
Hohman Avenue Tower, 149 Willow Ct, Hammond, Lake County, IN. Built by Erie. Near former Monon, EL, C&O and NKP (still active, NS), all ran NW/SE. Also near Indiana Harbor Belt, B&O (CSX) and NYC (NS) lines, all still active in some form and running E/W. Nothing is left of this tower today. Was demolished sometime between 2010-2011.

The tower would be out-of-frame to the left (West). This photo shows that trains in the 1970s still had quite a few boxcars.

The Chicago Rail Junction diagrams the current configuration where the Monon, Erie+C&O, and MC are abandoned and Hohman Avenue has an overpass over the train traffic.

Tom Golden caught an e/b train of 15 new B&M engines being delivered to Conrail at Gibson Yard for delivery to the B&M.

Posted by Dennis DeBruler at 9:38 AM