(Google Lemon Aug 16, 2020: I added the above photo because it has better resolution than the photo below. I did that add with Google's new blogger software because after Sept 1 they will no longer let us use the legacy version. The caption was copied from the photo below. I then updated this post with the old photo still in the post to check the new URL's for a Google bug before deleting the old photo in case the URLs got corrupted. The good news is that the Google bug did not happen. The bad news is that the font for the new caption is smaller than the normal font for captions. But in the blogger edit window that I normally see, the fonts are the same size. I don't normally look at the public, published view because I have trusted the author's view. Now I'm faced with the question of how many other things that I have changed over the last few months with the new software look funky in the published view?)


Terminal Railroad's 111th Street Station (today's B&OCT). As was common for the period, the station agent and his family lived in the second floor. The young girl out front was probably a family member. Note the laundry hanging on the line on the right side of the station.


The complexity of the corporate histories of the many terminal and industrial railroads that were built around Chicago has always hurt my head. The main reason for this posting is to record Bob's comment as another puzzle piece in putting together the puzzle of Chicago's railroad history.

Bob Lalich Whoever labeled the photo shortened the name of the railroad. The full name, depending on the time frame, was Chicago & Calumet Terminal RR, then Chicago Terminal Transfer RR, then B&OCT.

I've seen other postings of depots for terminal railroads. Back in the horse&buggy days the belt/terminal railroads ran mostly through countryside and places like Morgan Park were suburbs because they were built outside of the current Chicago city limits. So passenger travel made sense over distances that are now just city driving. Serving cemeteries was an important part of the business for some of these lines.


Please read Richard Parks' page. His page includes a 1960 map that does show a connection from Forest Hill to South Chicago and then southeast into Indiana that is not on this contemporary B&OCT map that I had found on the CSXT web site. Unfortunately, CSXT has since broke the link I found.

Skip reading the rest of this posting because I wrote it before I discovered Richard Parks' page! Today would have been easier if Google put that link on the first page instead of on the third page of the search results.
<update>Jan 2021  It is a good thing I didn't delete the following because I have discovered that the www.r2parks.net domain no longer exists!
</update>
Wikipedia indicates Wisconsin Central formed the Chicago & Great Western Railroad (C&GW) by 1886 to build a connection from its end-of-line in Forest Park into the city and to construct the Grand Central Station, which opened in Dec 1890. In June 1887, the Chicago & Calumet Terminal (C&CT) was formed by Northern Pacific Railroad to consolidate several terminal railroads in the Chicago area. In March 1890 NP bought the C&GW and other WC lines in Chicago to form the Chicago & Northern Pacific (C&NP). Since NP owned both C&CT and C&NP, it connected them with new construction and trackage rights. The 1893 Panic bankrupted the C&NP. In July, 1897, the new company Chicago Terminal Transfer Railroad (CTT) bought C&NP from Wisconsin Central. In May 1897, the CTT merged the C&CT. The B&O began using Grand Central in 1892 when a connection was made between the CTT and B&O at South Chicago. When the Pere Marquette was completed to Porter, IN in 1903, it also used the CTT into Grand Central. "On January 6, 1910 the Baltimore & Ohio Chicago Terminal Railroad was created to purchase the CTT at foreclosure, giving B&O control of the both the terminal railway system, as well as Grand Central Station." But CTT must have been split and the eastern end was bought by someone else because a modern B&OCT map does not show a line running to South Chicago.

Portage County Historical Society also has some history concerning the C&CT and CTT.

From Industrial Chicago, Volume 4, I learned:

And the Annual Report, Volume 40 By Illinois Railroad and Warehouse Commission gives me some more facts to chew on: 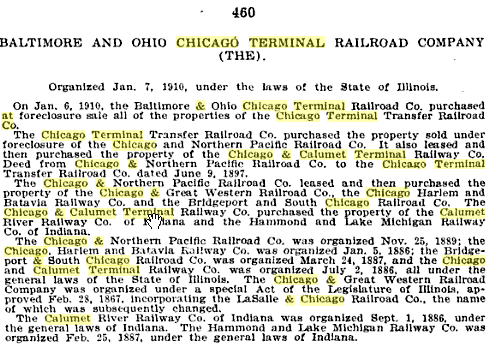 Update:
Scott Griffith posted two images with the comment: "Chicago Northern Pacific , first time ever seeing a map of this."
John Pisciotto That was the cover company that helped build the altenheim sub and Grand Central Station. When during the Depression in the 1890s the Northern Pacific filed for bankruptcy they sold off the railroads that they had built in the Chicago area. The Baltimore and Ohio bought them at a fire-sale price. This became the core of what would become known as the Baltimore and Ohio Chicago terminal.
Bob Lalich After foreclosure proceedings, the C&NP was reorganized as the Chicago Terminal Transfer in 1897. The B&O purchased CTT in 1910 and reorganized it as the B&OCT.


Ean Kahn-Treras Bob Lalich any idea how long the trackage just south of the CNW thru oak park lasted? First time I’m seeing any of that...
Paul Schlichting Was always told that the parkway between about 19th and 20th win Cicero and Berwyn was at one time a railroad road right of way, this explains the story


There are more details in the comments about how some of the tracks were used as runarounds.


Posted by Dennis DeBruler at 2:20 PM