Also called Tower CO by C&NW. Mayfair Yard was just a little southwest of this tower.

This tower controlled the crossing of the Chicago & North Western and the Chicago, Milwaukee, St. Paul and Pacific near Cicero (was Jefferson in 1897) Avenue a little north of Montrose Avenue. The following 1897 map shows another railroad crossed the C&NW next to the Milwaukee. If you look at a modern map, you will see that the crossing has been removed by having the south branch join the C&NW main and then the north branch diverges from the main.

The photo shows the C&NW has 3 tracks and the Milwaukee has 2 tracks. I was surprised that a contemporary satellite image shows the same number of tracks. The railroads tend to remove tracks from their routes.

According to the satellite image, both routes are elevated, so I can't drive there and easily verify that the jointed rail in the photo has been replaced with CWR (Continuous Welded Rail).

The junction is in the upper-left corner of the Bird's Eye View. If you zoom in and pan the area between the raillines, you can see that many of the smokestacks in the background of the photo are still standing. I counted seven in the Bing Map.

Steven J. Brown posted a couple of pictures. His comment:


Two images of trains at Mayfair taken standing on the the same spot. The slide mounts say June 1982, but from the lighting and the leafless trees, I suspect it is probably February or March. The first frame is RTA (later Metra) F40PH 128 on the Chicago and Northwestern Northwest line. Turning slightly right and waiting just a few moments, F40C 46 on a Milwaukee Road North line train. 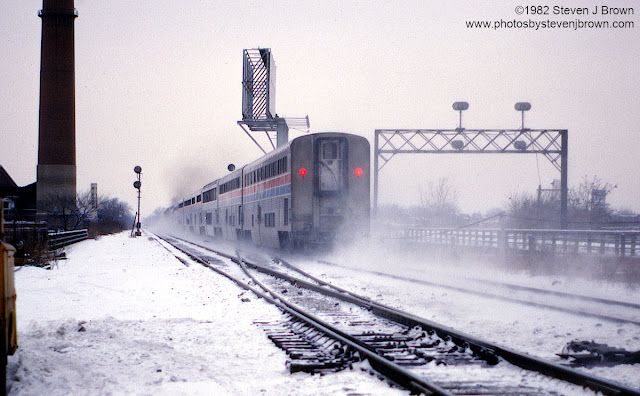 Steven J. Brown posted
Last night, as I was digging through my drawer of slides 1980s A-C, it slipped and dumped on the floor. I spent several hours putting the 1.5k of them back. Some of them fell into the scanner. here is one of them.
Amtrak Empire Builder #7 is accelerating away from the diamonds at Mayfair. The signal bridge on the right is for the CNW's Skokie and Weber lines. Chicago, Illinois - February 1982.
Flickr is almost a duplicate of Douglas Kydd's posting.
Posted by Dennis DeBruler at 4:28 AM