I started this a while ago, and then forgot about it. I have written specific posts about specific cranes. But this post still makes sense as an overview. I have also added the "crane" label to the blog.

The motivation for this post is a video of a crane putting itself together. When I saw them build the I-355 overpass over Ogden, I saw them construct and deconstruct a big crane using two smaller truck-mounted cranes. By big crane, I mean each tread itself is hauled by a semi-truck and the body of the crane is a significant oversized load. Liebherr has added extra hydraulic jacks to their smaller crane so that a crane can put itself together. I noticed that a bigger crane can add its own tracks, but it needs a helper crane to finish assembly.

(Update: I saved these links before I discovered how to make permanent Facebook links. But even the group link for "Heavy Transportation" is now broke.

But a Google search of "self assembling crawler crane" found some videos. This is the one I watched.)

The video that shows how to build a LR 1500 is heavy on "PR cuteness." So I just drug the time-line cursor over it. I did catch this scene that shows that a crawler track  fills a flatbed trailer. Also note at 2:46 that a second crane is needed to add parts to the crane.
Manitowoc M250 can also self-assemble. I don't understand some of the terms like "boom butt" and equalizer. I wonder how all of those pins are powered? air? hydraulic? Either way that seems to be a lot of valves.


An example of about the smallest (oldest) cranes I have seen were a couple that were putting on a demonstration at the SCRAP annual Labor Day antique tractor show in 2015. 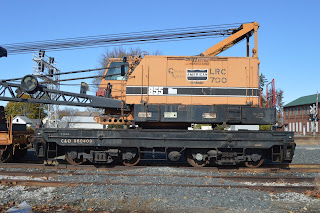 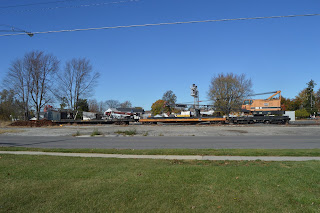 John's comment: "MRL on KRL: New Locomotive Crane on Kasgro Depressed-center Flat Car." I have always wondered how far they can swing a load to the side since they don't seem to have any outriggers.

Self-propelled cranes are getting rather big. The trailer provides more axles to spread the load across the road and turn the crane around curves. I count five telescoping segments to the boom. Given that each segment is rather long, I wonder how long the boom is when it is fully extended. I finally found the cab to drive it on the road. It is hanging off the front side. I have a posting of more telescoping cranes.


You think it's a bad day when a couple of cars drop on the ground while switching? How about a day so bad you have to get a crane (or two) to pick up your crane?! (also in the Paducah North Yard) — in Paducah, Kentucky.

Don't you just love the smiley face on the side that says: Happiness is working safely?

It looks like the operator of the yellow crane did not bother to extend any outriggers. I've seen pictures of cranes tipped over, but they are "standing" on their outriggers.


The pieces of cranes themselves can be huge. A couple of pictures of the block assembly of a Liebherr 13000 crawler crane.


After crane assembly, we started with some of the smallest cranes. Now for some of the biggest.
And the largest crane-like machine in the world: "Bagger 293 - The Largest Land Vehicle In The World Bagger 293 (was built in 1995 in Germany) is 96 metres (314.9 feet)." My Facebook link broke, but if you Google "Bagger 293", you will find plenty of information on this bucket-wheel excavator.

Posted by Dennis DeBruler at 10:21 AM