I live just a few blocks from where Main street crosses the CB&Q in Downers Grove, IL. I've noticed that I seldom see a container train, and I haven't seen a car carrying automobiles in many years. Now that I have taken a couple of trips to photograph the Lemont SantaFe Railroad Bridge, I now understand why I haven't seen these types of cars on the CB&Q---those trains use the SantaFe tracks. I assume they are switched to the SantaFe route in Galesburg.

During the first trip, I caught a two engine train that looked like a container train:

But then the train changed from container cars to the following type of car:

I have never seen that type before. I assume it is a fully covered, articulated automobile carrier. The remainder of the train was of this type.

The articulated cars must be efficient because of reduced rolling resistance and uniform cross section (lower wind disturbance) because it was a rather long train for just two engines Or else the BNSF uses a lot bigger engine on this route than they do on the CB&Q route. And/or, the SantaFe route across Illinois is flatter than the CB&Q route. But now that I'm thinking about it, maybe CB&Q is now using just two engines and I haven't noticed.

The pictures I took during my second trip had a train parked on the bridge. The red lettering on the end-unit just beyond the end of the bridge is "AUTO-MAX." So that confirms my auto carrier assumption. By the time I went on this second trip, I had bought a new SLR camera. So I can now digitally zoom in by cropping the picture before I upload it. The following is from the above short span image: 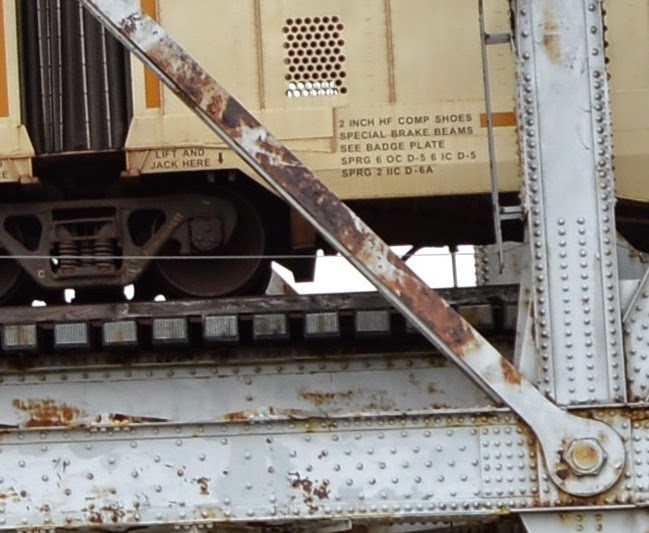 I also included a bridge joint since picture height is not an issue. It is nice to know that you can easily "count rivets" with just the normal resolution of the camera. Note that the car is empty. I was wondering if the cars are filled with Asian imports when they are being back hauled to midwestern car factories. Or maybe the imports are off-loaded before they get this close to town. I have seen a "car import" yard in the Chicago area, but now I can't remember where.

The reporting marks were AOK followed by a 6-digit number. I can't include an image of one because every one had a bridge beam obstructing some part of the mark, even in the long span picture.

When the train started, the remainder of the train was car carriers. I could not see the front of the train to tell if it had container cars up front like the previous train had.


One reason why BNSF may switch these articulated-car trains to the SantaFe route is because:

Conversely, the CB&Q route has heavy commuter traffic and a lot of grade crossings in the Western Suburbs.


Posted by Dennis DeBruler at 3:42 PM