(Update: more example of equipment with some older liveries.)

When I saw the second BNSF engine this morning with a color scheme that did not include orange, I decided it was time to learn more about the paint schemes. I had also noticed that the locomotive liveries that included orange had different details.

H1 has a thick orange stripe down the middle for the black lettering and just one yellow stripe between the orange stripe and the "dark Pullman Green" that is above and below the orange/yellow area. And it has the SantaFe cross logo on front but with the lettering of Burlington Northern Santa Fe Railway. The colors are based on Great Northern Railway's pre-1967 colors of  Omaha Orange and Pullman Green. Another railfan indicated the dark color is "Northern Pacific dark green."

The following has a Warbonnet scheme as well as H2.

In 2005, the company changed their name from Burlington Northern and Santa Fe Railway to BNSF Railway. The the BNSF letters are no longer their reporting marks, they are the name. So they created a new logo that motivates the railfan's nickname of "swish." H3 is H2 with the yellow lettering replaced by the black logo and the dark color is supposed to be black instead of Pullman Green. But exposure of a picture seems to make more of a difference in the dark color than the name used to describe it.

Sorry about the exposure in this H3. This is a screen shot from one of my first attempts to use the video feature of the camera, and I learned that it doesn't handle back lighting as well for video as it does for still pictures.

H4 is the same as H1 but with the modifications of green->black, the new logo, and a wider orange band. One source said that H4 was for use on the cab units. Another said that H3 was for wide cabs and H4 was developed when they started repainting SD40-2 units. Some sources call the H2/H3 scheme the Premium Heritage and the H1/H4 scheme the (standard) Heritage.

There are still some of the BN and SantaFe schemes running on the system.

The second unit on the video I took today:

The picture above for the H1 scheme was the second in a consist that had a patched BN engine:


These units were switching a string of covered hoppers and crossed the road more than once without letting the gates up so I had more opportunities to take pictures than I wanted. I assume they are old units which is why they have old paint schemes and are assigned to switching duties. 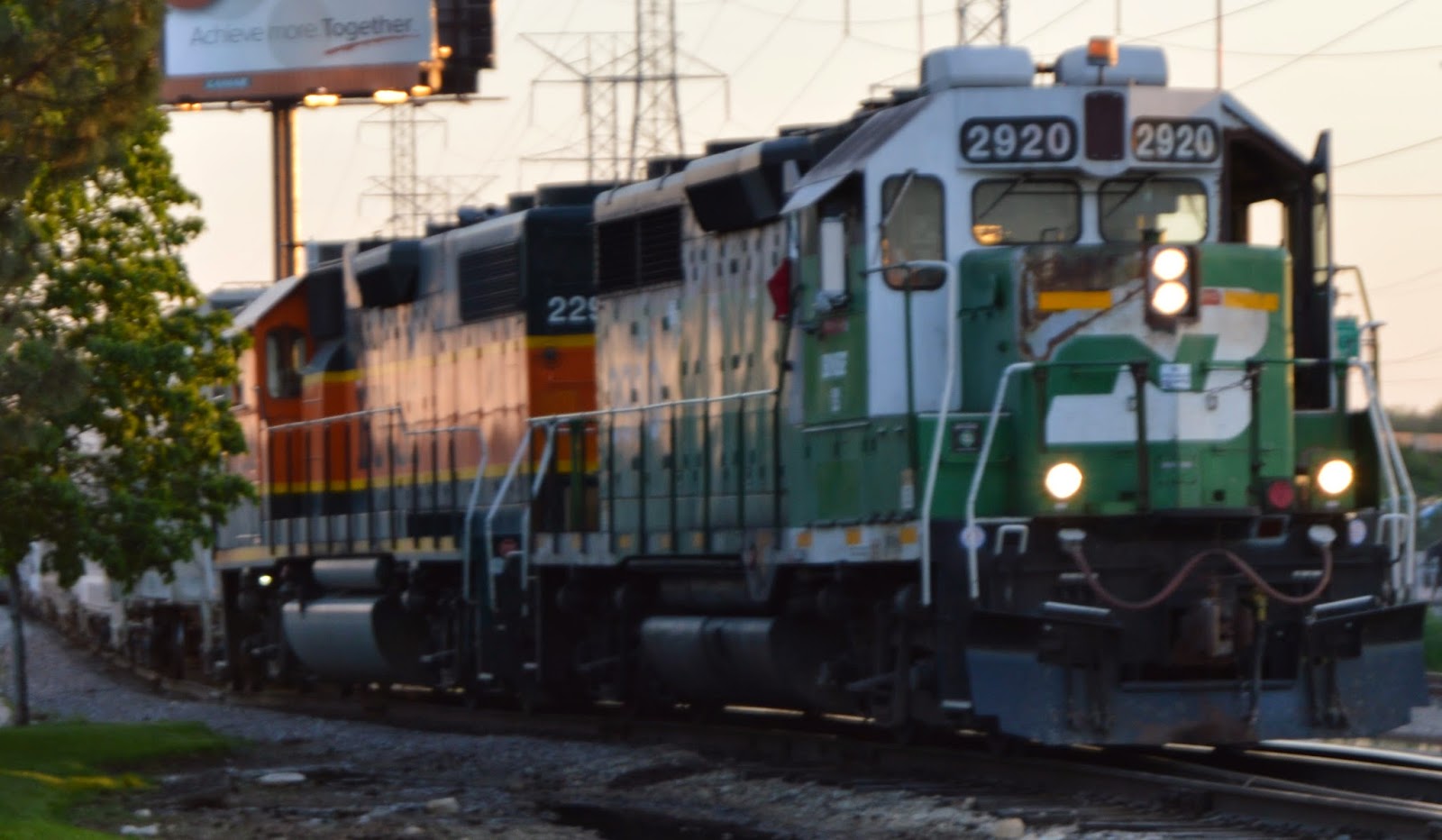 And while I was by the CB&Q tracks trying to get pictures of freight trains, there were commuter trains... 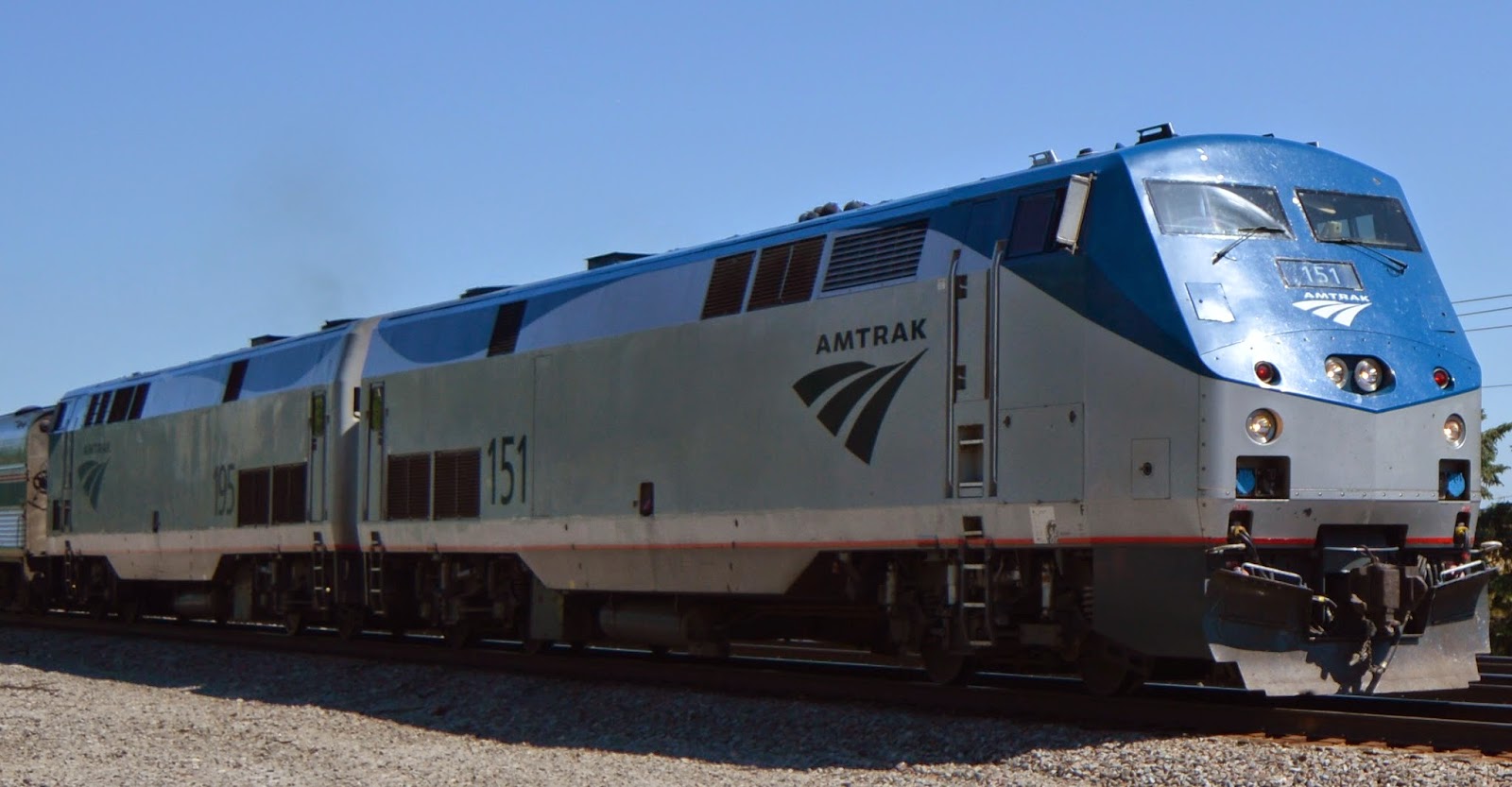 This Amtrak train was rather long for a passenger train. The Zephyr line to San Fransisco has used this route since its inception. The Southwest now switches from the old SantaFe route to this route at Galesburg, IL, because Amtrak did not want to pay 100,000 dollars for a stretch of track in Chicago that is being abandoned by the parent railroad. It is the same abandonment that is threatening the continued existance of the St. Charles Air Line Bridge. The overpass in the background is I-355. The electric power lines are in the same corridor that goes by the Hidden Lake Forest Preserve. 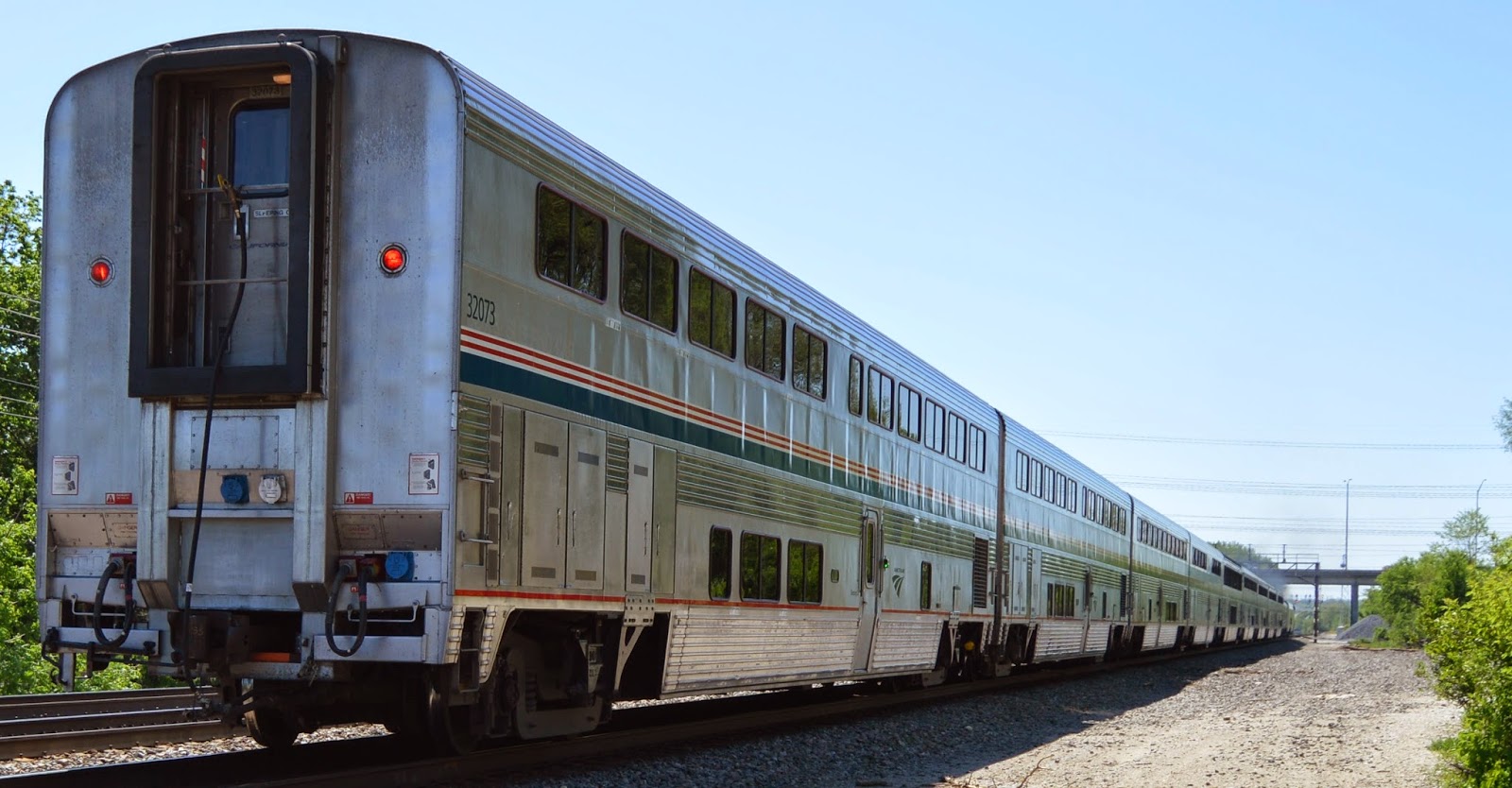 Of note was a tank-car unit train. Not only was it being pulled by two NS engines, it did not have all black tank cars like the BNSF trains do. It did have the buffer covered hopper cars at the beginning and the end that I see on this route but not on the SantaFe route.

These cars have at least some of the improvements that are needed to avoid fires when they derail--- the shield plate at the ends and the shield around the valves on top so that they don't snap off if the car rolls over.

The details for the container train of which I took a video:


All of the trailer flat cars were flat cars. I didn't see any of the type where there is metal just where the wheels would be. And several of the flats were carrying a single-high container instead of a trailer. And several of the flats had two short UPS trailers. Including a few that had just one short trailer on the front of the flat. This train was much more"rural" than the typical container train on the SantaFe route. SantaFe tends to have just one double-high container well after another.


"Santa Fe Sunday"
A day of the year I always seem to hit the jackpot with vintage Santa Fe equipment is April 22nd, for seemingly no reason. Today was no exception, as I caught the HNTWBRC at Long Common Road on the Racetrack in Riverside, and again at Nerska on the BRC... and on the other half of BNSF's massive Chicago terminal, the BNSF2846, a Bluebonnet GP38 led the YHOD303 from Clearing into Hodgkins around 8am this morning, turning into the MCHIGAL and heading west around three this afternoon..
What. A. Day!!!

The paint schemes of the merger partners continue to survive. It is not too unusual to still see BN green covered hoppers. But BN painted engines are getting rare.


Watching a video reminded me that I forgot to discuss BN's Executive Paint Scheme that uses Greinstien green. I've seen a lot of trains on The Racetrack in Downers Grove, IL. But this is the first time I've seen one in person. In fact, I saw two of them --- the second and fourth units of four units on a Sept. 14, 2018, westbound mixed freight.
Even in a bright sun, the green is not very green. I looked at it on three different monitors, and it looks more blue than green to me.
BNSF is getting some new rebuilds, so railfan  photos of the H4 livery are showing up on Facebook.

Old EMDs with the narrow nose are becoming rare outside of yard and local use. That is why railfans will make a special effort to photograph them if they are put on road jobs. Because they are old, they have the H1 livery.


An H4 on a standard cab:
Greif Packaging explains this long spur I saw at 9th Street Crossing in Lockport.

200mm looking North shows some undulations in the east mainline and makes the spur look like a roller coaster. 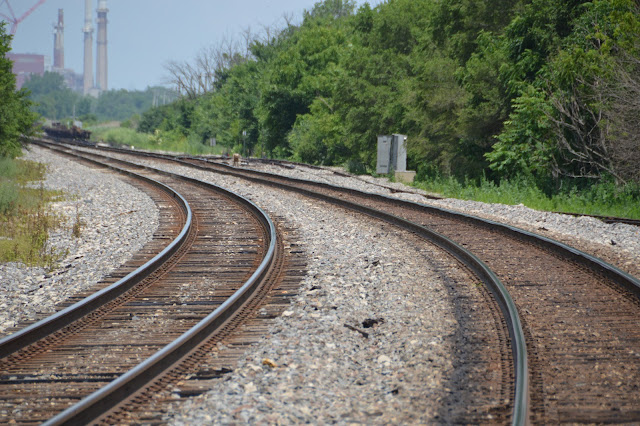 You know some locomotives are special when two different railfans post photos of the same train.

A video that is a "parade" of older paint liveries working the east end of the Eola Yard.
Chuck Guzik Sounded like he went into emergency.
Daniel Metzger I shot the video while he was still working the yard, probably about a half hour before he actually departed.