Several more views of this bridge are in some notes about this bridge no longer opening for barge traffic.

Update:  I learned from Ramon Rhodes in Facebook that Santa Fe designates this bridge as 24B. Ramon has posted a 2009 photo essay by Joe Padgen. I have already mentioned a posting by Ramon concerning Bridge 9B. He explains that the number in a bridge designation indicates the milepost that was established with Dearborn Station as 0.

I first discovered the SanteFe Railroad Bridge across the Sanitary and Ship Canal near Lemont when I moved to the Chicago area in the 1970s. It was impressive enough that it was the first bridge that I visited after I retired. It is on my to-do list to find and scan the pictures I took in the 70s. But I can get the blog started with the pictures I took recently. The first three pictures were taken with my cell phone because I could not retake the pictures of the barge with the big spool. The remaining pictures were taken later after I bought a new SLR camera.

Even though the bridge was designed to be a movable bobtail (asymmetric) swing bridge, it was fixed by the 70s. Back then, I watched an empty barge being pushed very slowly under the bridge with crew members on the barge watching the clearance between the top of the barge covers and the bottom of the bridge because there appeared to be just a few inches to spare. During a recent visit, I noticed an 6-barge tow of empties heading downstream. Unfortunately, I did not have a camera working yet when I saw it. It was a rather big tow for this canal because many of the tows are just one or two barges. I closely watched the tow go under the bridge. Several of the barges had covers, and it appeared that there was a foot of clearance. Evidently, that is plenty of clearance because the tug did not slow down for the bridge.

When I arrived, there was a barge "parked" on the side of the canal next to the bridge with a big spool of cable. It was clear that the spool was too high to go under the bridge.

Later, I figured out that the pickup truck was towing a pump. And they were pumping water into a bulkhead that was about 10 feet long on the spool end of the barge. You can see the hose and some of the bulkhead portal just beyond the top left side of a drainage channel in the following image. 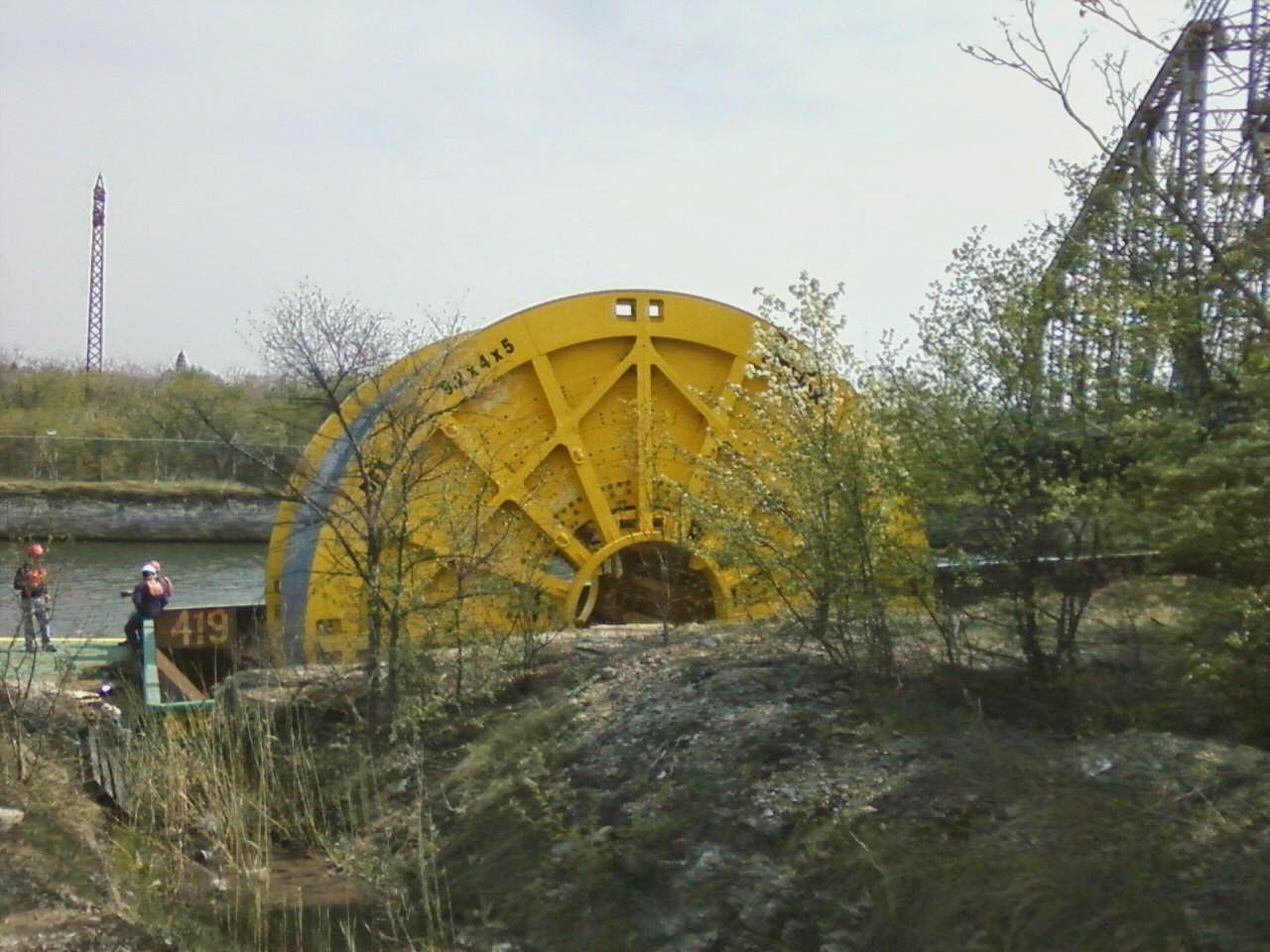 This second picture was taken a while after the first one because I had driven down to the end of the industrial frontage road and back between taking the two pictures. If you look closely, you can see that the barge is beginning to tilt so that the spool end is a little lower than the other end. But it is going to take a lot longer to sink the spool end enough to get it under the bridge so I left and went into Lemont. Later, when I was leaving Lemont, I noticed from the "high bridge" that the barge was going under the bridge. So I parked my van on the shoulder when I got off the bridge and trotted back up the pedestrian walk. It  turns out, I did not need to hurry because the barge was not moving.

This is the first time I have seen a tugboat move a barge on the hip. Note the offset (asymmetric) design of this bridge so that the navigation channel is not obstructed by the swing pier. This is the West elevation, and the camera is facing upstream. The swing pier is setting on bedrock because this stretch of the canal is dug through a limestone outcropping.

The East elevation is not cluttered with weed trees, but I could not frame the whole bridge even with an 18mm focal length. So this is most of the bridge and... 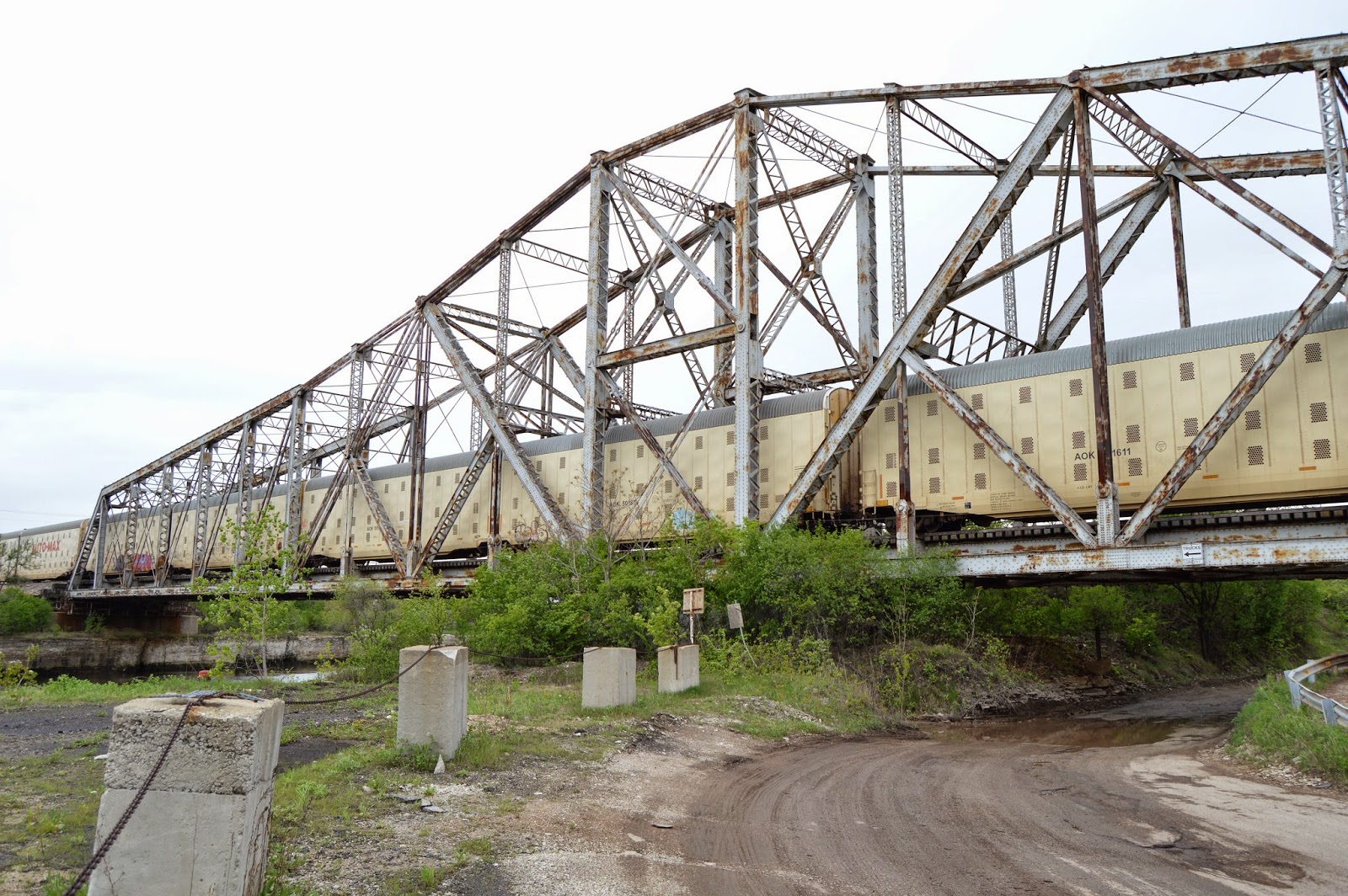 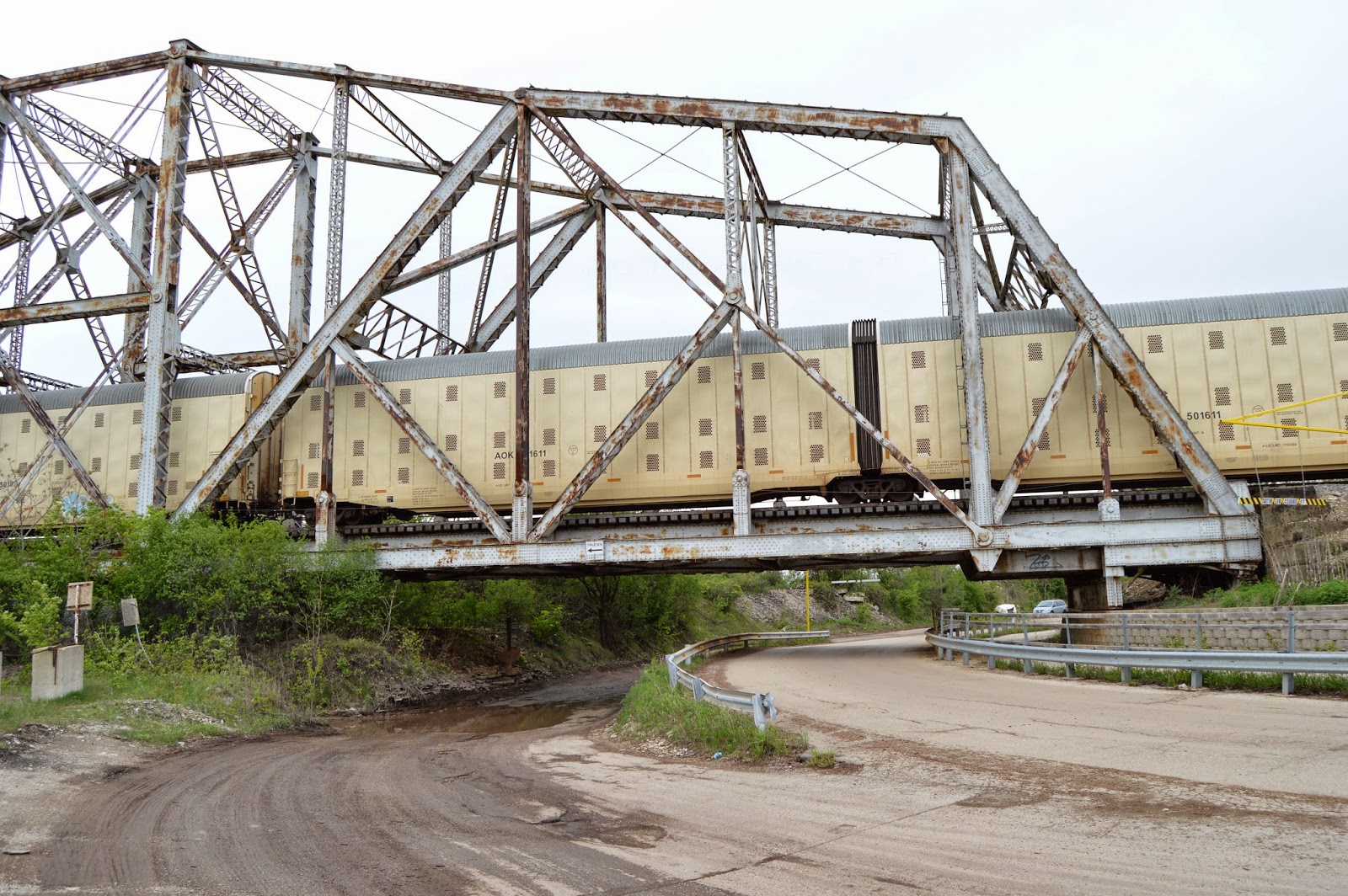 I was fortunate that a train was stopped on the bridge so that you can see the immense scale of this bridge. The sky that day was blue, but I overexposed the pictures so that you can better see the details of the bridge. The two lane road in the middle has just a 9'9" clearance, so the road on the left is dug into the bedrock to create a truck road with a 14'5" clearance. The little "road" on the right is a bike trail. Above it you can see part of the metal counterweight used to balance the weight of the long span.

One advantage of the bobtail design is that you can easily get a underside view of the short span. 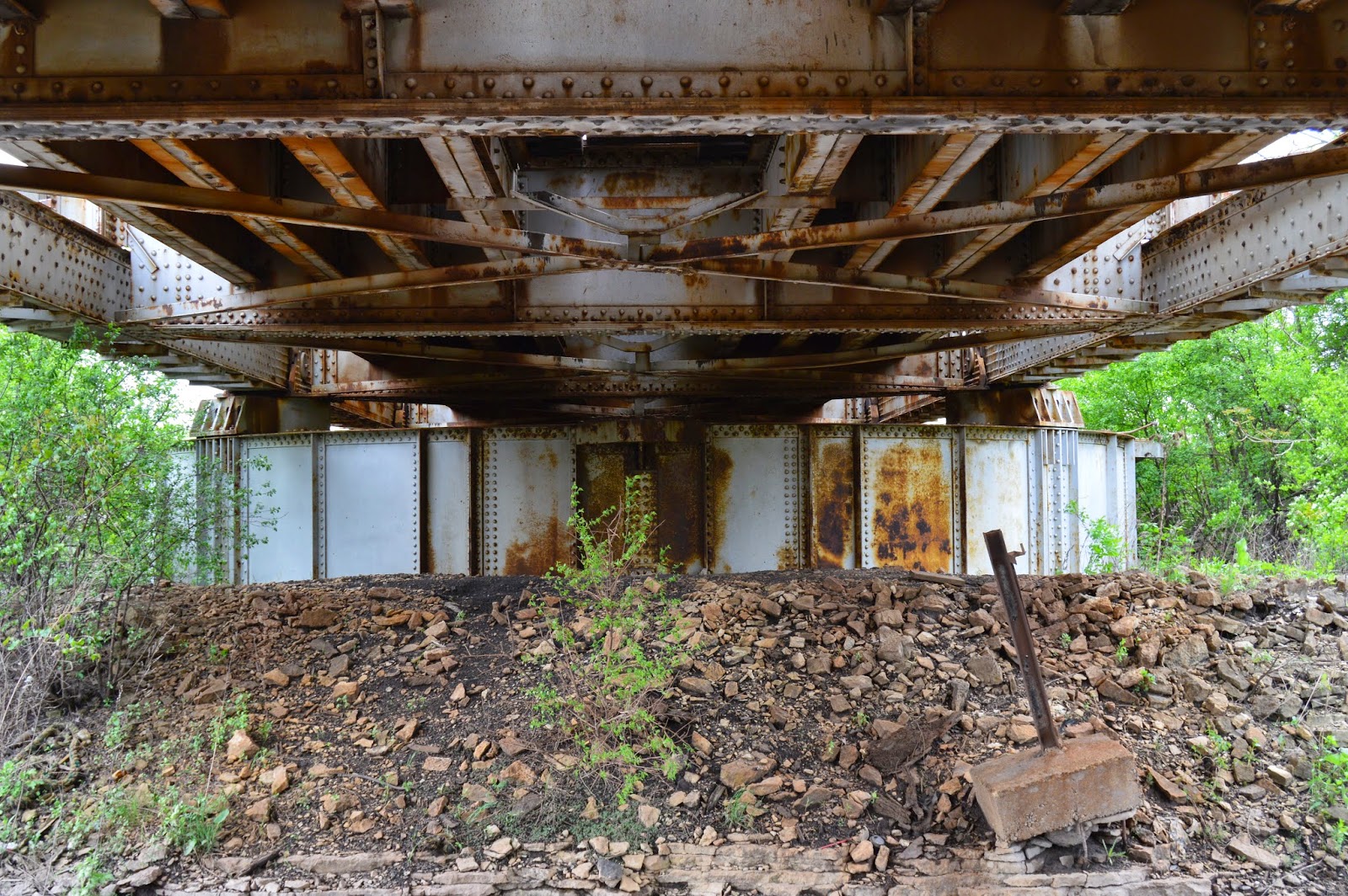 And this view shows the fresh cut they made in the limestone to create enough clearance for trucks. 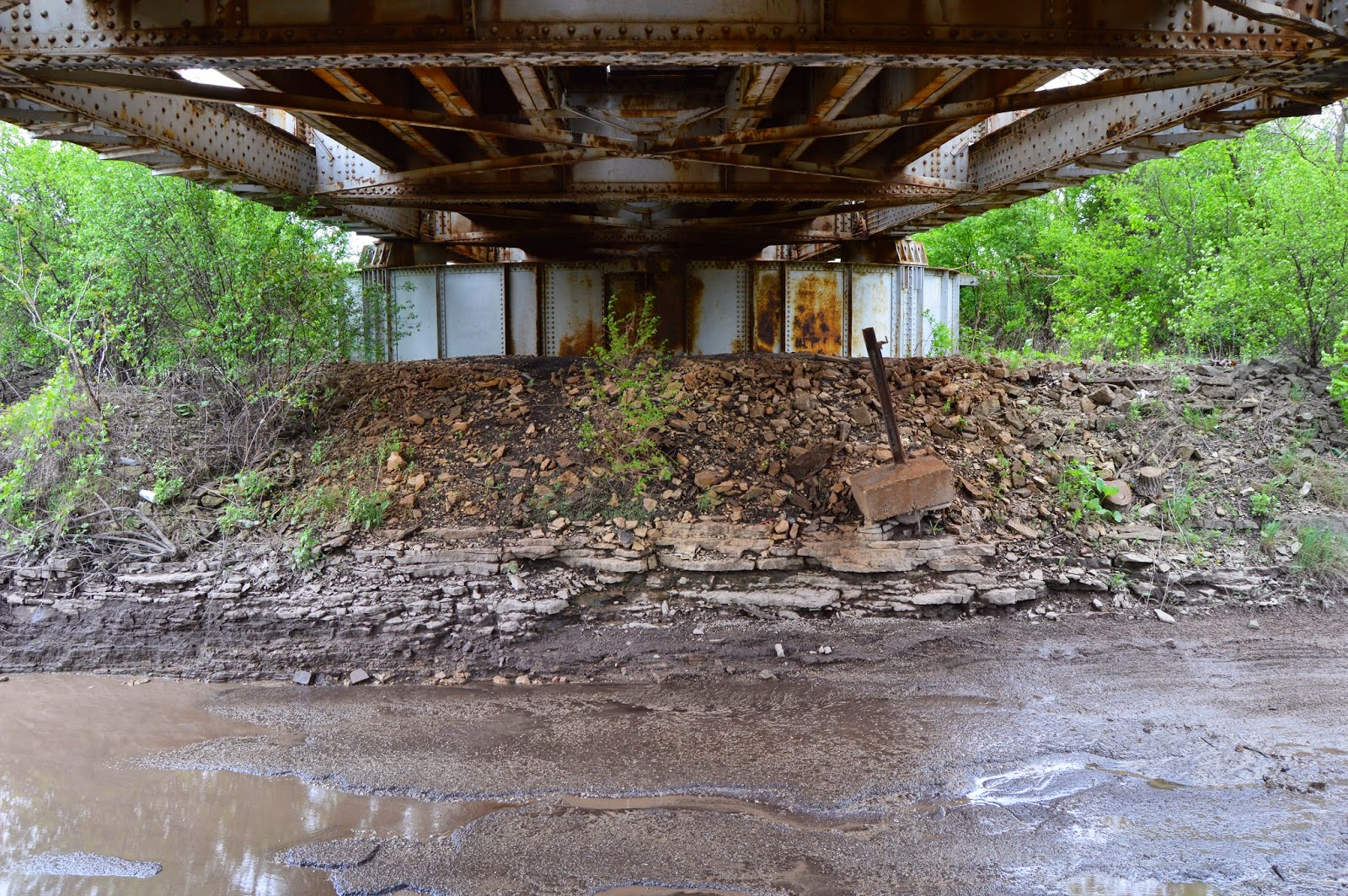 Because of the size of this bridge, you can clearly see the tension vs compression members. The tension members are pin-connected rods whereas the compression members are built-up beams. And the number and size of the rods varies as the load varies. Most steel truss bridges I've seen use just one standard size. But if a bridge this big, it would be a significant waste of steel if the size of the links were not customized. I've inserted this close up of the center tower with its original size so that you can pan it and see the details. Note that the top cords have 4 big rods. And the upper-left to lower-right diagonals have two big rods whereas the other diagonals have two little rods. And all of the diagonals have turnbuckles so that the tension can be adjusted. I had assumed that the counter weights on the short span would balance the long span. But if that was the case, I would expect the diagonals in the central tower to be symmetric. 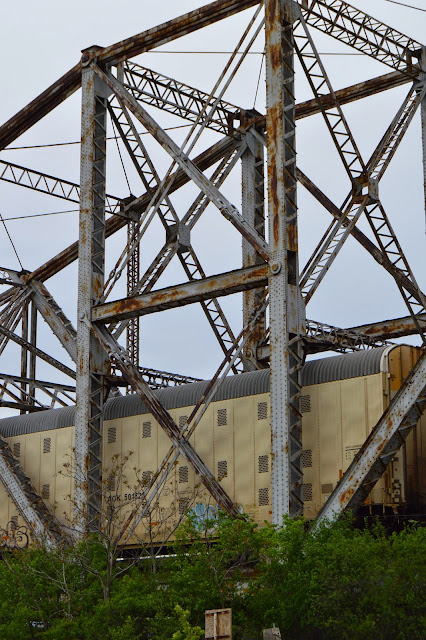 I was concerned about the amount of rust I saw on the bridge. And then I discovered the pictures taken by lazzo51. His collection contains about a half-dozen pictures for this bridge, and they are all much more rusty than my May 2014 pictures. So this bridge has had some maintenance.

Whenever I'm in the area, I got to the end of the old Lemont Road to check out the barge traffic. The sun happened to be good for catching another picture of the bridge. (Most of the property along the canal is fenced off and you can't legally get close to the canal. This spot is the other extreme, it doesn't even have handrails. I learned later that towboats stop here to let crew members get off and walk into town.


I usually planned 90% of my shots, even though I didn't have access to modern apps, radios, time schedules, etc. I depended on hot trains leaving Corwith on-time and I was rarely disappointed. I was shooting with a Nikon F4HP and a Nikkor 100-200mm straight f:4 lens. I picked up a cheap KMart 2x tel-extender, under $10 I'm sure. I set-up on the west side of the bridge over main (Stevenson?) street in Lemont, IL and waited. I was shooting at least at a minimum of f:8. I forget the shutter speed. All shots were hand advanced. I think #3 wins the gold star.


Flippin' Friday. Flip through these reposted photos iffin' you like. These were taken either while awaiting the first westward trip of the new GP60M's or just after. Both trains are on the same main, so probably a before shot. I doubt that I stuck around after the 60M's. This train, lead by an SD45-2 and a C30-7 (In my actual favorite Santa Fe scheme.) are eastbound, running wrong main. The north track was typical for outbounds from Corwith. A very crappy morning as it was way overcast and I was shooting with a straight f/4 zoom and coulda used a few more open f/ stops. I shot these manually and I did manage to luck out between trucks shaking the Lemont road bridge. Yes, I know there's a parking garage there now. Lemont, IL May 1990.


Number 3 was the keeper. October 1990 in Lemont, IL. I'd set-up this shot from the west side of the small bridge over Stephen Street. The afternoon 199 train was due, but you never knew what would show up before or after. Luckily I caught GP60M 132 and a few others leading that day. Nikon F4 w/Nikkor 100-200 mm Zoom and a 2X Telextender. All manual, no motor drive. The good old days.

Jacob Metzger posted fallen flag locomotives on the bridge and a towboat by the bridge.

Jacob Metzger posted the same photo to a different group, and Ramon Rhodes provided a picture of a towboat in a comment.

Middle River Marine has a crew at this bridge to ballast and de-ballast.

Keith Yearman posted ten black&white photos including some pin-connected details.
Michael Zwicke Any one know when this ceased being a swing bridge? Must have been impressive to see this monster move.


Two of the photos shared by Bruce Blackadar from his album:
Posted by Dennis DeBruler at 11:22 AM