In the 1970s, Lemont Road was two lanes and went straight across the Sanitary and Ship Canal using an old truss bridge and continued on Stephen Street. The truss bridge has now been replaced by a "high bridge" that connects with State Street at the top of the hill on which historic downtown Lemont is built.
It first crossed the Des Plaines River. MWRD posted two photos with the comment: "Two views of a bridge over the Des Plaines River at Stephen Street in Lemont, Illinois, on June 11, 1924."

This crossing is now named Old Lemont Road road rather than Stephen Street.
Now you can park your car at the South end of Stephen Street and follow a path to the canal's edge. We have seen this view looking upstream before. That view had a strong flow in the canal and some rather big waves. Note that the waves are small in this view even though we had strong rain storms cover most of the area the evening before.

During this visit, a towboat was tied up and a couple of the crew members walked to town. When I first walked down here, I was surprised there were no hand railing along the canal. Later I learned the reason why this area is open that this is one of the places where Illinois Marine Towing does crew changes.


The pilot house can be raised so that the captain can see over a tow of barges.

The bridge in the background is (a rather small part of) the new "high bridge" that I mentioned at the top of this post. The I&M Canal downstream view shows more of the bridge that is south of this part. I have taken pictures from this part, and I learned that sometimes the bridge "bounces." The first time I felt the bridge go down, I dumped a lot of adrenaline. Fortunately, it doesn't go down very far.

From where I'm standing, if I turn to my left, I see a memorial for three mariners: 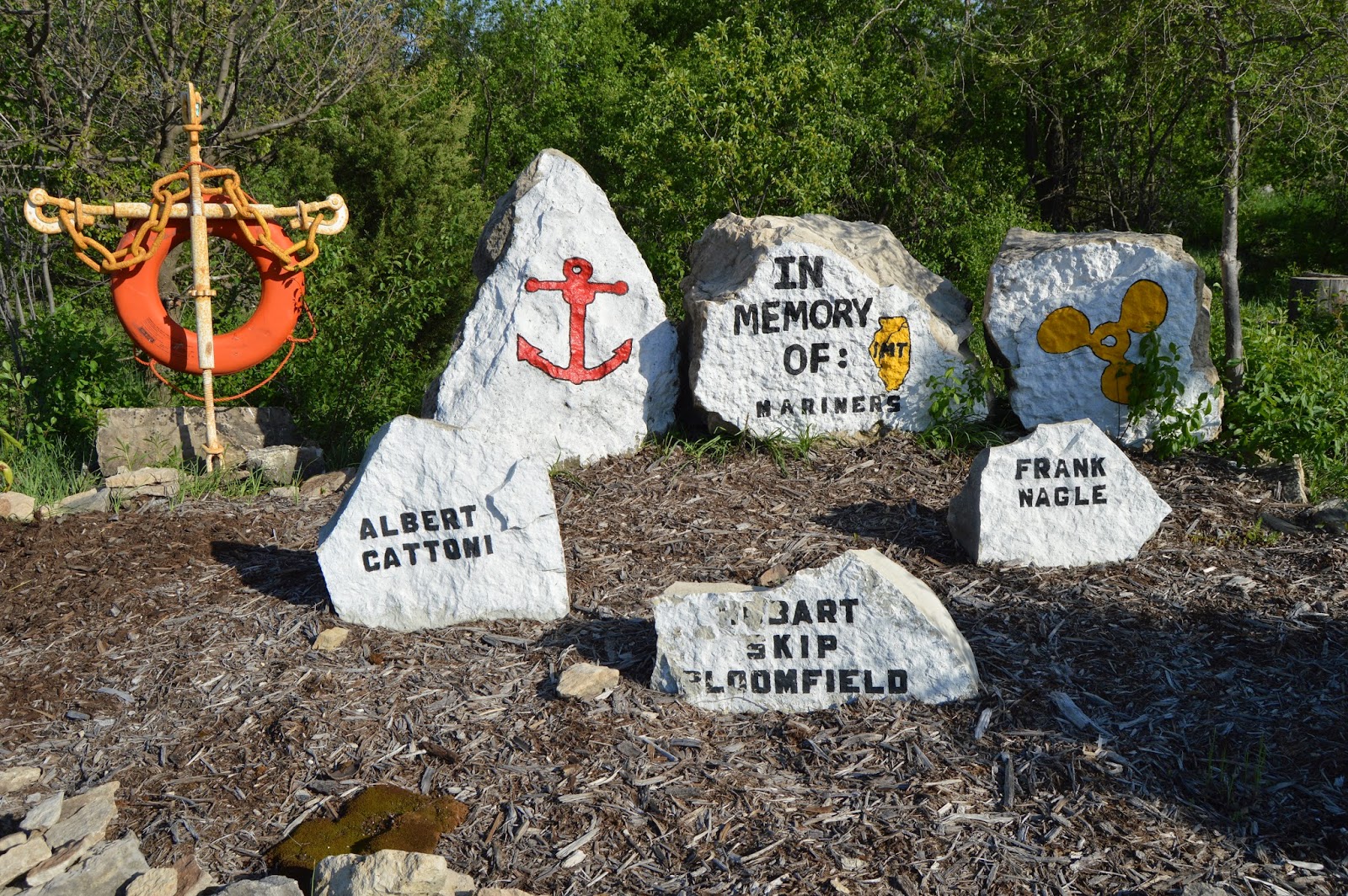 Further inland from where the towboat was tied up is the abutment for the old truss bridge: 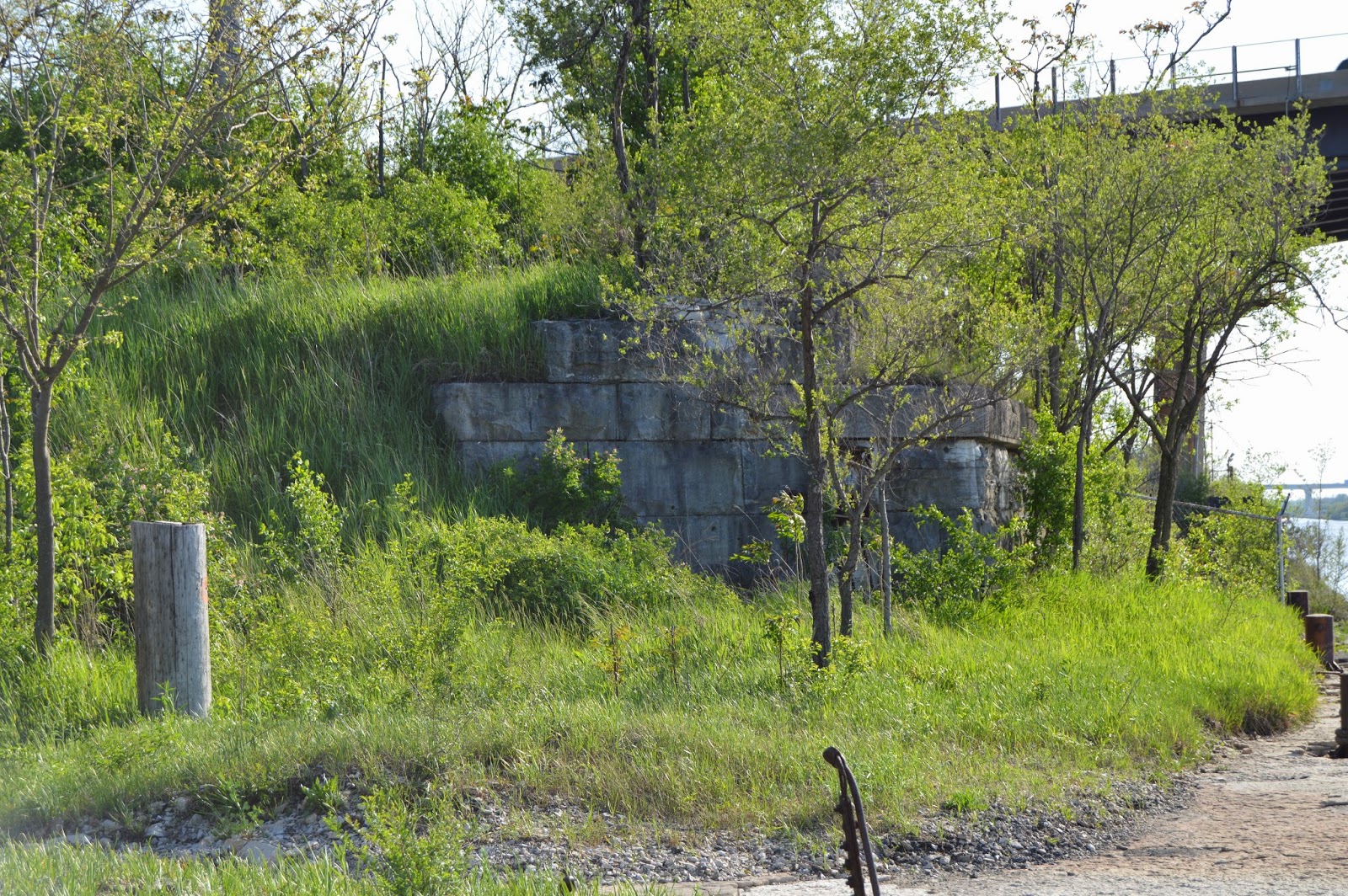 As is typical of this area, it is built with limestone blocks rather than concrete. Of note is the chain link fence peaking out to the right of the abutment. That would be were MRWD ownership of the canal's edge resumes. The MRWD fences off all of their land, even if it is vacant. So it is hard to get within a few hundred feet of the canal. On the other hand, being able to walk right up to the edge with no railing is kind of scary.

The following picture is looking north across the canal. The bushy hill is the old road grade for the other end of the old bridge. 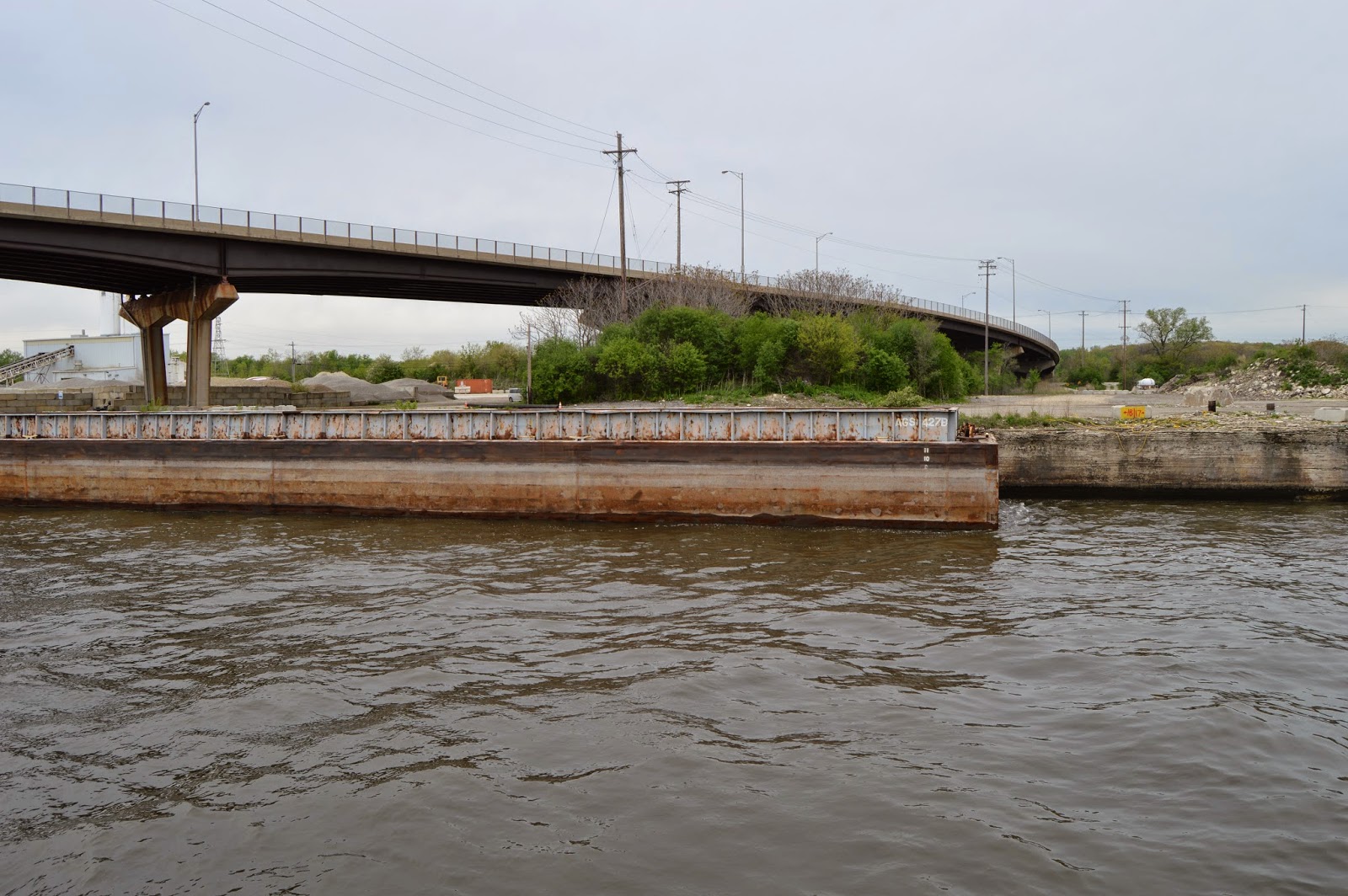 The following shot was taken from the top of the above mentioned abutment and is facing south. The grass covers the hill that was built to carry the road up to the bridge. And beyond the SantaFe overpass, you get a feel for the hill that Stephan Street goes up has it goes through Lemont. The two guys just below the overpass are the two towboat crew members that were walking to town. The van is mine. You can see that it is real easy to park for this canal access. I went down the hill  to get a shot that shows most of the street. 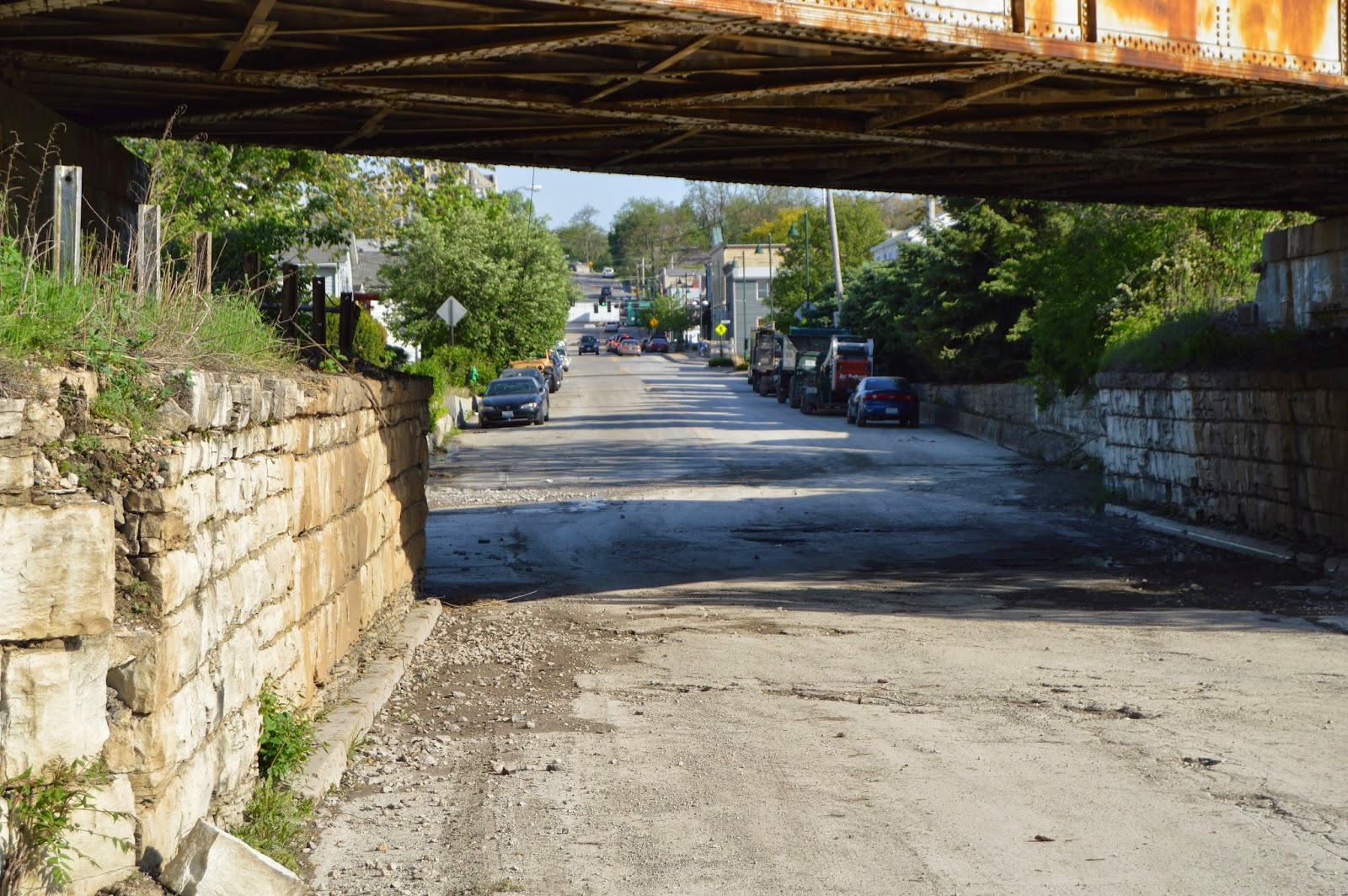 What you don't see in the above photo is that the limestone wall needs some maintenance: 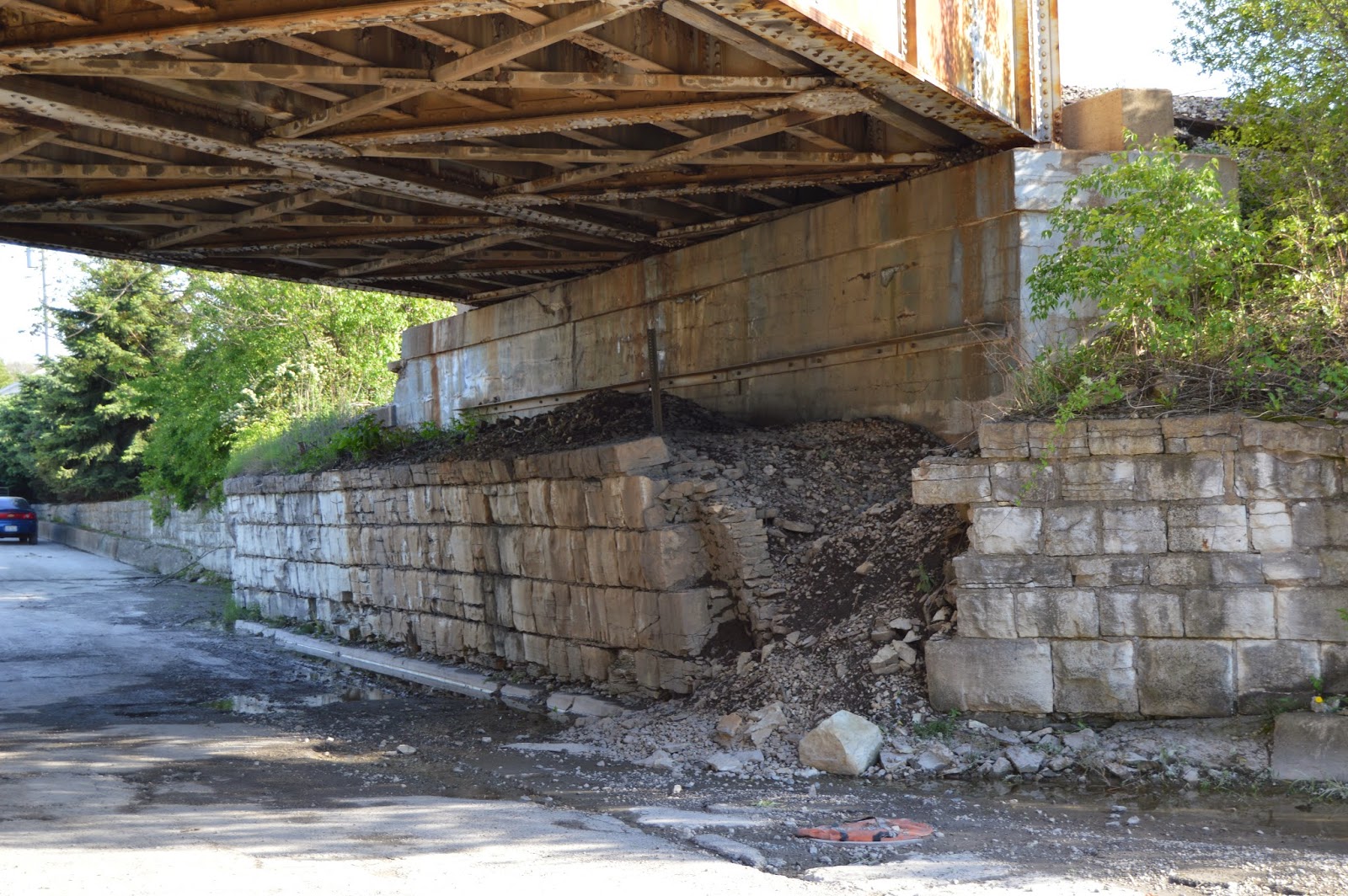 Fortunately, the limestone wall is just a retaining wall. The actual bridge abutment is a solid looking concrete structure.

I digitally zoomed into the hill part of the street view because I noticed that a TOFC train is on the Altontracks in the background. And because the bridge rail in the lower-right hand corner is part of the I&M Canal bridge. And, unlike the following picture, this one gives you a good sense of the hill that climbs out of the Des Plaines River valley. 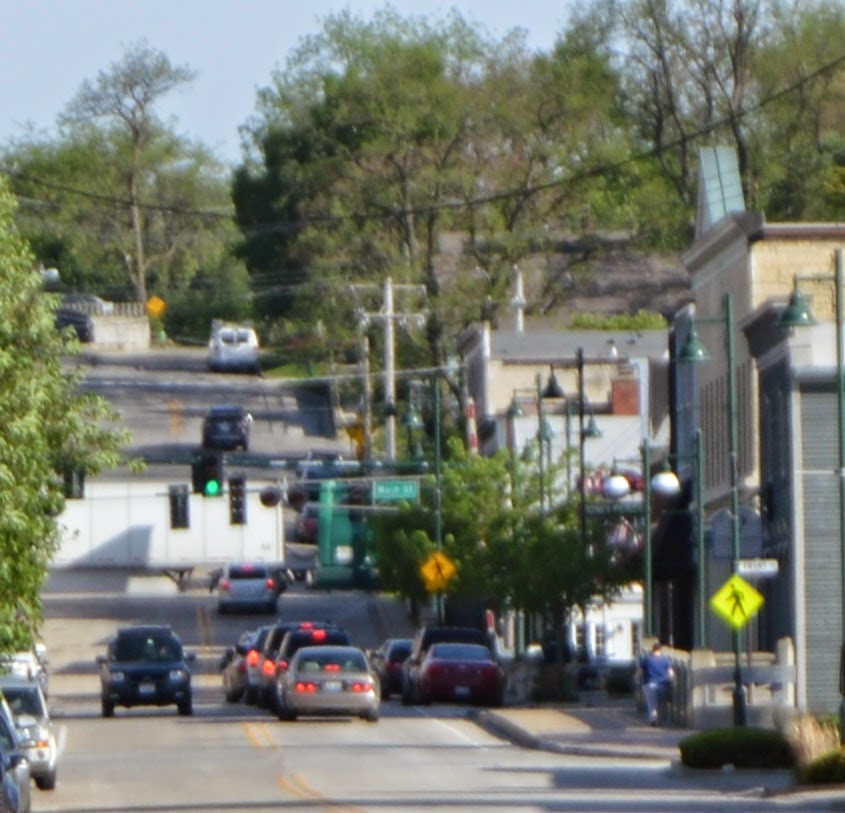 Later, when I heard a train whistle for a crossing, I was on Front Street taking pictures of the I&M Canal walls. So I ran to Stephen Street so that I could get a view of the crossing. I got to Stephen just in time to see the end of a TOFC heading towards Chicago and then an Amtrak train heading away from Chicago. I was able to get the camera going in time to catch the Amtrak engine. 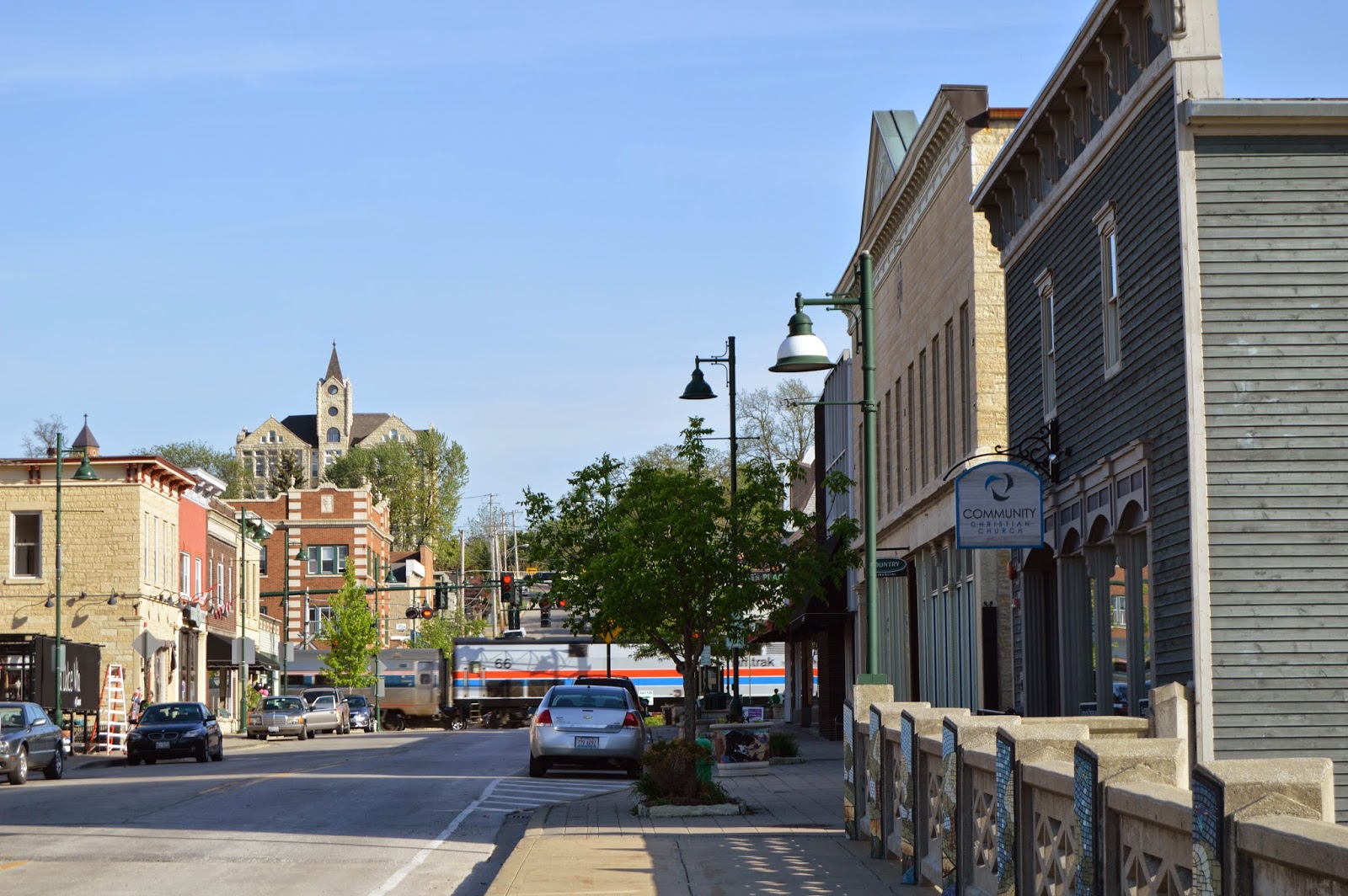 The foreground is the now familiar I&M Canal bridge. An interesting game is to count the number of buildings that are built with limestone.

Posted by Dennis DeBruler at 9:58 PM