BNSF does renumber some freight cars

One of the things I learned in math class was that observation, even extensive observation, does not make a proof. I would call conclusions based only on a sample of data to be an "engineers proof." My example of an "engineers proof" was that all odd numbers are prime (1, 3, 5, 7; ergo prime). But you can prove something wrong with just one counter example (9). I have learned that my observation that BNSF did not renumber freight cars was wrong.

On Facebook I learned from Ian Clasper that they did renumber their well cars. He also mentioned that it was rare for a covered hopper to be renumbered. I have never seen a grain car (3-bays) renumbered. But I saw a posting of a video that indicates that at least some sand cars (2-bays) did get renumbered.

I generally take photos of all the cars in a mixed freight, but not in intermodal trains. However I did catch some intermodal cars in a parked train when I was taking pictures of the Belmont underpass.

These are the reporting marks that were on the first car above. I could not find any reporting marks on the next 3 cars. Is it because they were dirty? All four cars had a vertical reinforcement design, which strikes me as an old design so I would guess that they were originally  BN cars.

Update: this posting is just a few hours old and I've already come across an update. In a Michael Matalis picture of a DPU for a oil unit train, we can see part of the buffer car. I noticed that they have switched from covered hoppers to boxcars. This is probably because the bumper corn harvests the past two years has made covered hoppers too valuable to use as buffer cars. This makes old boxcars valuable enough to renumber. I wonder if they fill the boxcars with the sand barrels like you see in front of bridge piers along interstate highways.

Update:  Keon McGarvey has caught a Frisco 3-bay covered hopper that was renumbered and patched for BNSF. (Update of the update: I have learned that BNSF has done a series of "heritage" hopper cars. So this is probably a Frixco heritage car.)


Update: a Jan 15, 2014 train had three 2-bay covered hopper cars, none of which were renumbered. 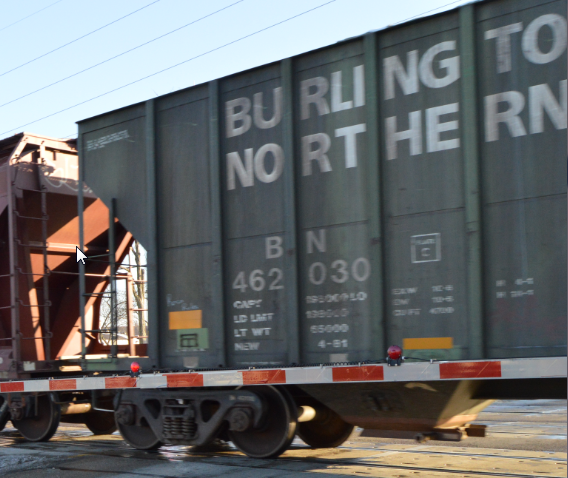 Update: there are photos of quite a few BN cars in Flickr. None of them have been renumbered, including the handful of 2-bay cars.  I believe they are all post merger because the oldest picture was 2010.


I wouldn't say it's common, but in addition to the intermodal cars and other examples cited BNSF patched the BN pole car fleet to BNSF early on, and quite a few ex-ATSF boxcars.

Posted by Dennis DeBruler at 7:56 AM