Racetrack: the trains would not stop!

Update: the mixed freight was hauling trash containers.
Update: all of the pictures I took are now available in my reference blog.

On January15, 2014, on the way back from a field trip to Lemont, I swung past the Library in Downers Grove. I could not find a parking spot, so I continued north on the Forest Avenue crossing of the BNSF/CB&Q. As I crossed the tracks, I checked for headlights. I saw one to the west so I turned on Warren Avenue and, to my surprise, easily found a parking spot on the street. I quickly parked the car and hustled back to the crossing. It turns out that even when you can see a headlight, the train can be rather far away. I did not have to hustle. After that train passed, I saw another headlight so I waited for that train. Then after that train left, I saw another headlight, etc. This is a summary of the trains I saw (all of the times are PM):

There was yet another headlight to the east, but I did not stick around for it because it was a commuter and I wanted to get home. But it arrived while I was still on Warren Avenue. And then while I was waiting at the stop light to turn north on Main Street, an eastbound oil train came through. When the light turned green, I did an illegal lane change (no was other traffic) and ducked into the passenger pickup to take pictures through the car window. I missed the number on the first unit by about 5 feet.

The Diesel Shop now includes "built" info for many of the locomotives. So I included the year in the above summary. I noticed that since 1998 every locomotive was built by GE. 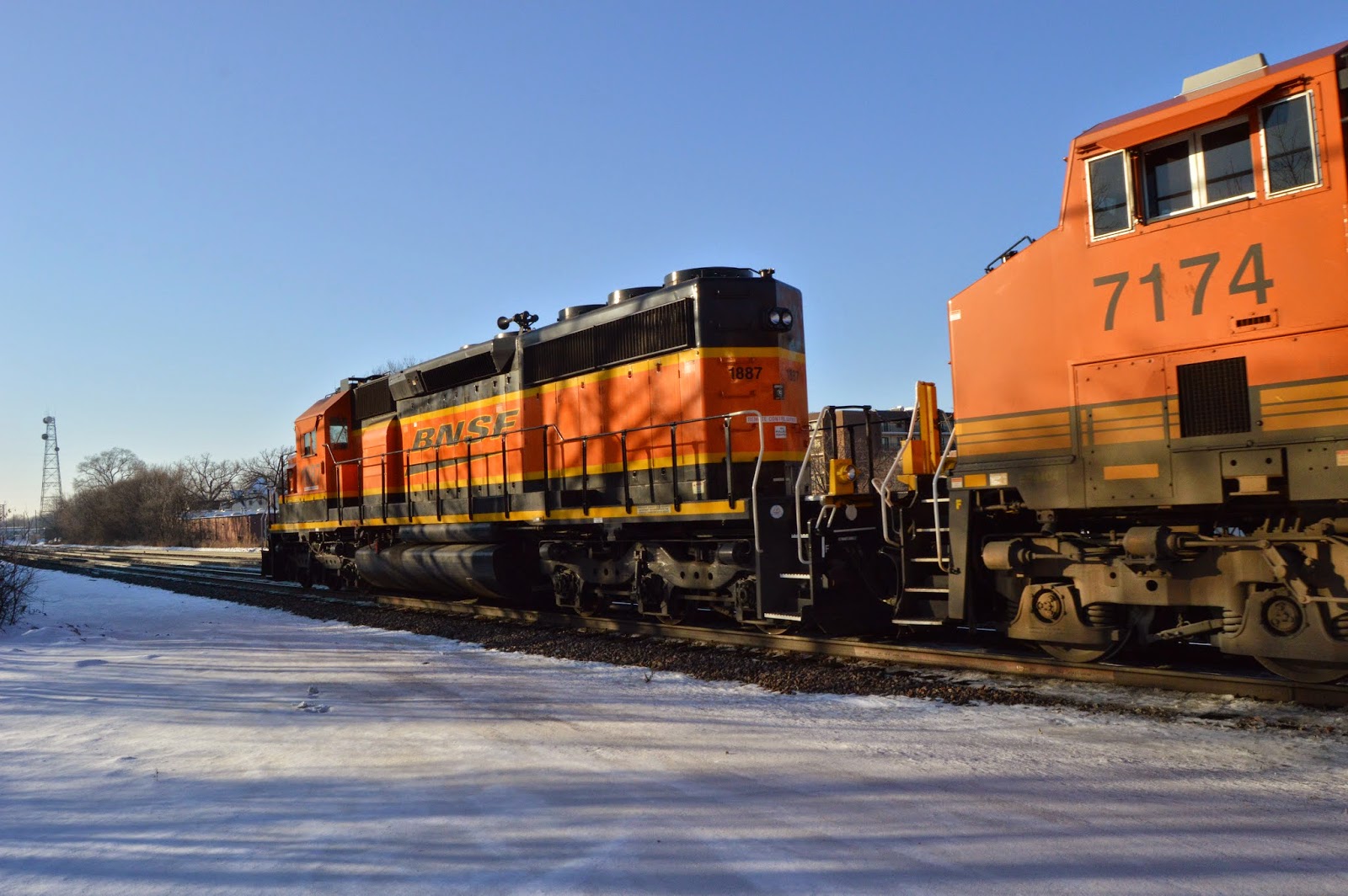 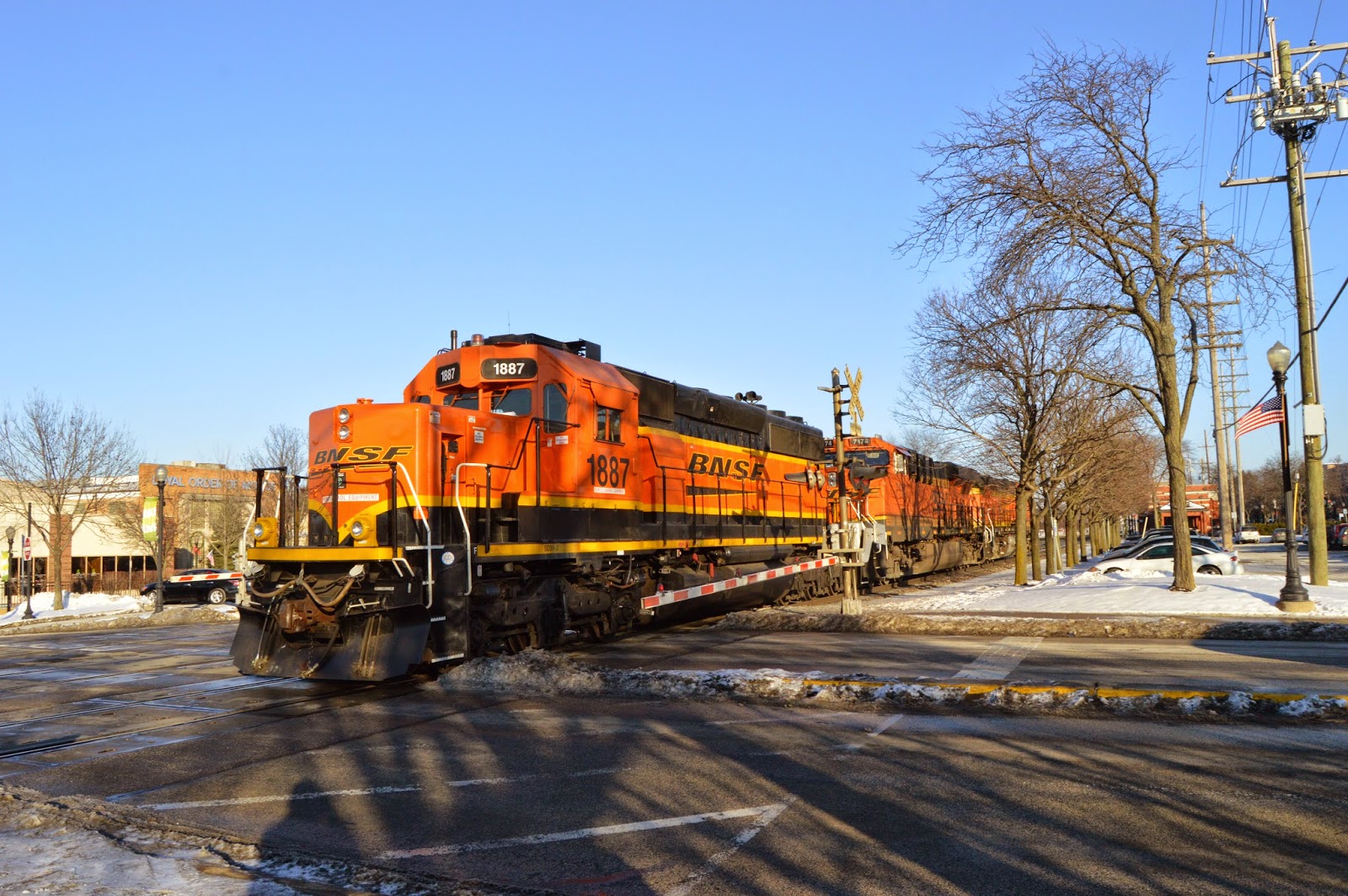 Just because railfans make taking pictures of engines look easy, does not mean it is easy. 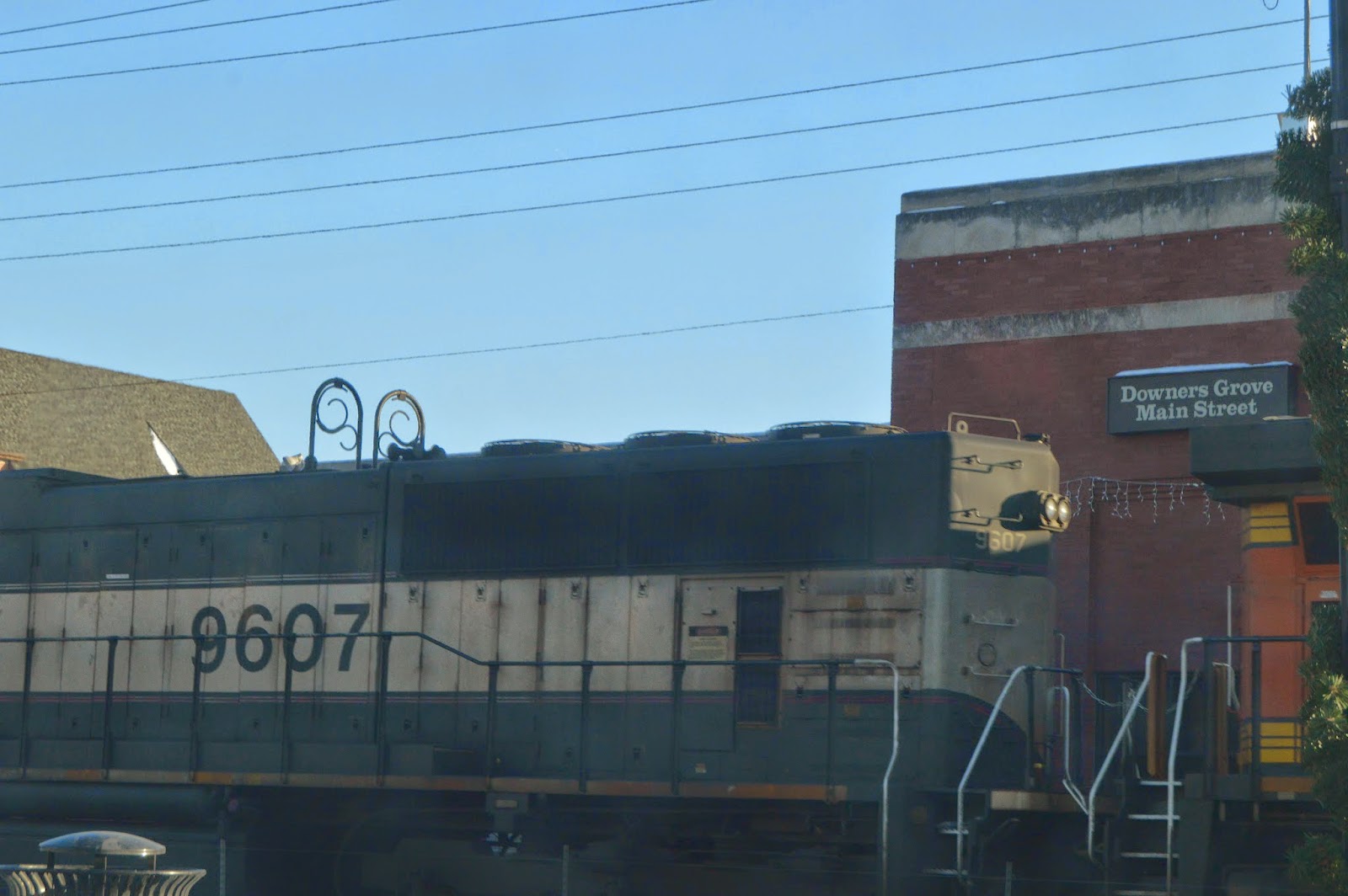 The other EMD, 9607, is also of interest because of the paint scheme. So I include it even though it was a "grab shot" from the dark side . I believe this grey version is called the Executive paint scheme.

And I include pictures of the Amtrak train when it was not much more then a headlight (3:22:02) and when it arrived (3:25:52) to record how long it takes for a headlight to turn into a train. Also note in the headlight shot that you can see the "light" train leaving town.


I took "headlight shots" of the trains to record how close they were after the previous train had passed the crossing. In this shot of the westbound mixed freight, I zoomed in to verify that the train is crossing over from M3 to M1 but the gates at Washington are not down yet. I'm glad to report I did not see any false gate closings while I was taking pictures. But my wife told me that when she came home from the post office that the oil train caught her. And the gates for Washington and Main stayed down for about 30 seconds after the train had passed even though the gates for Forest went up as soon as the train passed. She confirmed there were no other trains in sight while the gates stayed down. So the new signalling equipment has invented a new failure mode.

The grain train consisted mostly of BNSF hoppers with two different paint schemes. In fact, the first two cars after the engine represented the two paint schemes --- the "shish" and the "cross." The picture also taught me that you can have too much sun. 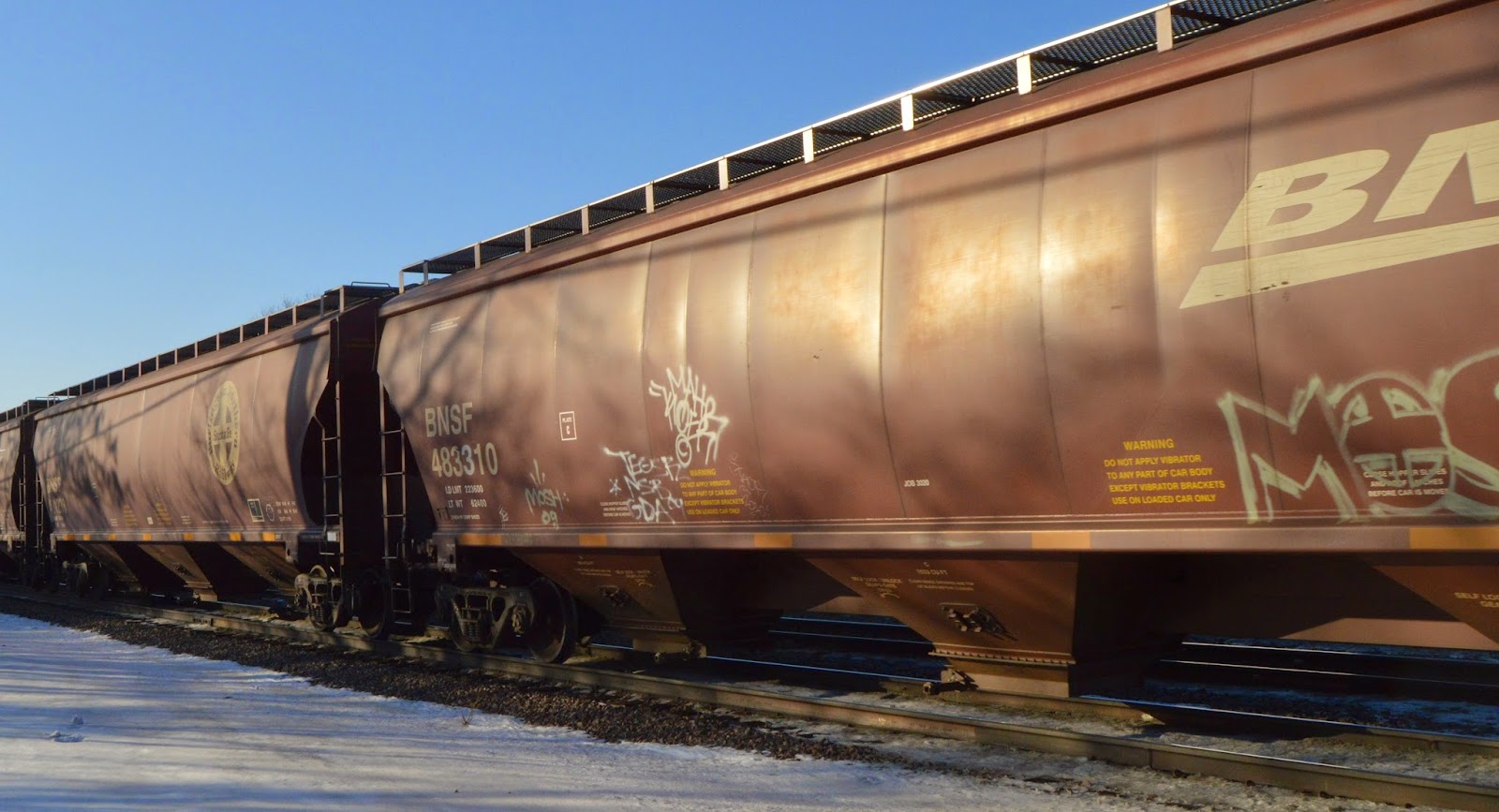 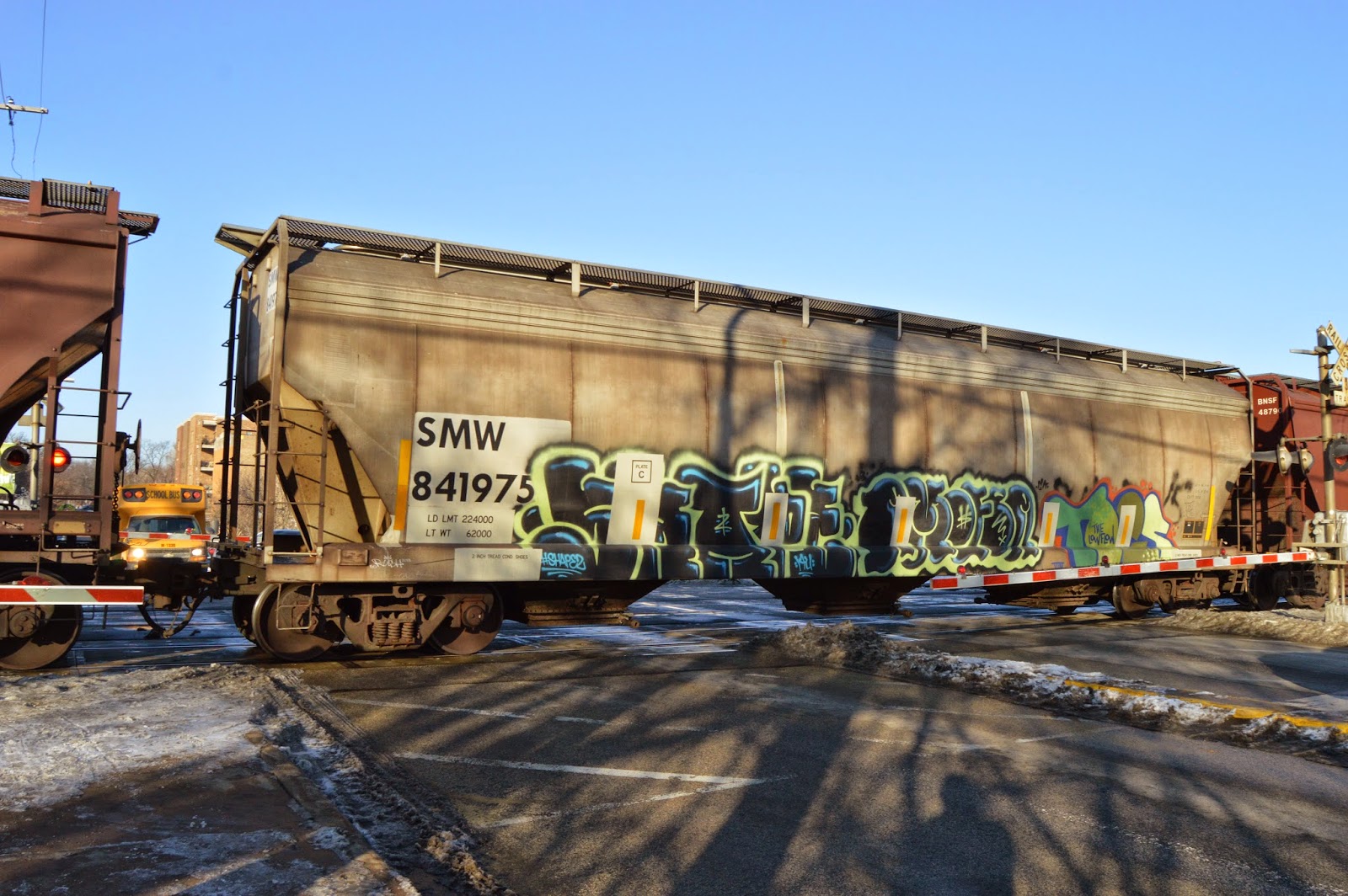 I took pictures of the non-BNSF cars. There were 6 of them --- AOK (brown), SMW, AOK (light grey), SMW, light grey with reporting marks cut off, and SMW. I include one of the SMW cars because I could not find the reporting mark in about five lists that I looked in, including a .gov list. AOK is Arkansas-Oklahoma RR. 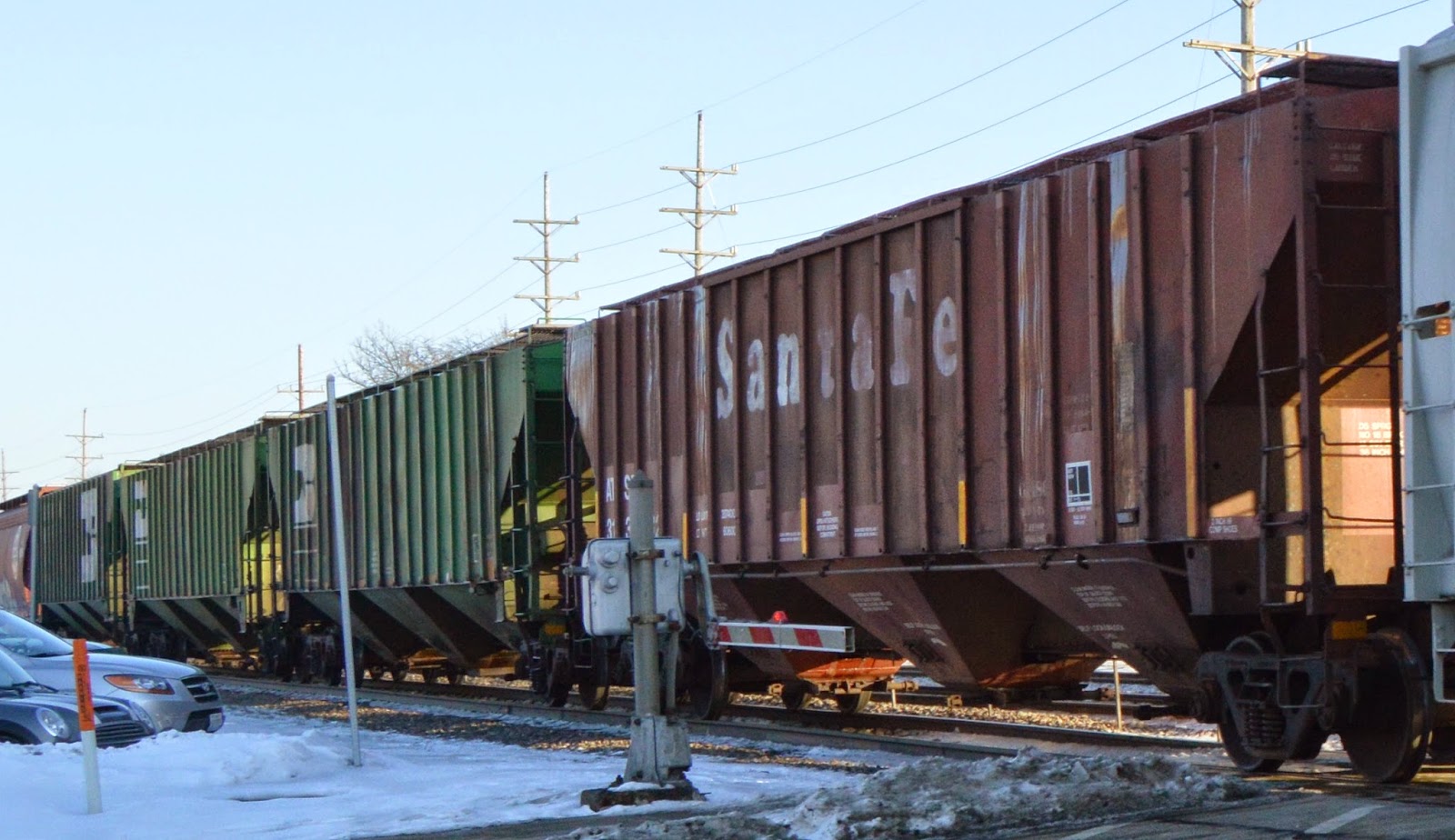 Below, I include two views of the same car. I think this is a 2-bay hopper. This is the first 2-bay covered hopper that I have seen that has NOT been renumbered for BNSF. 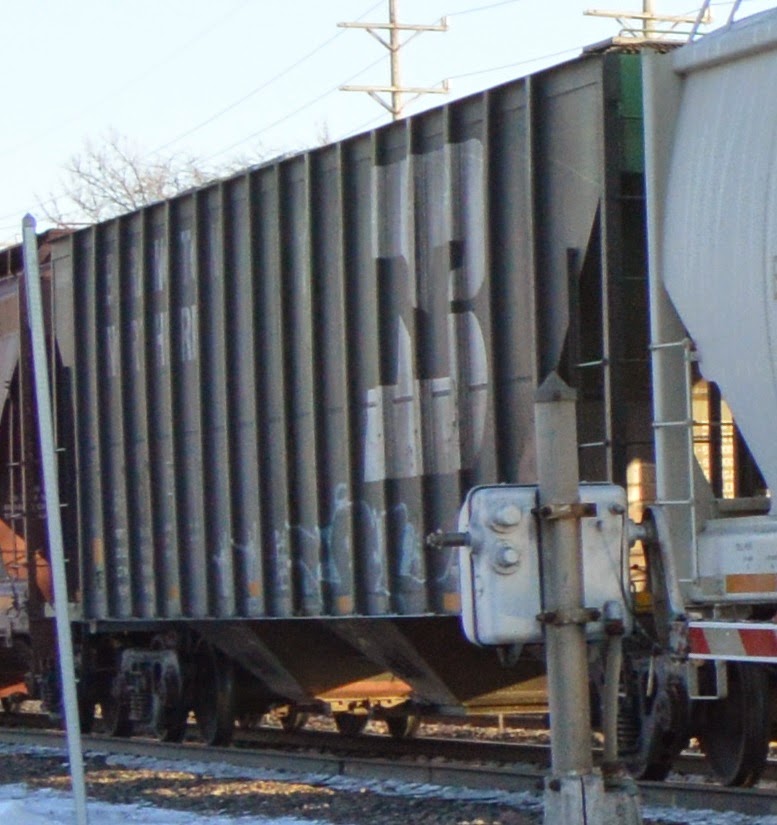 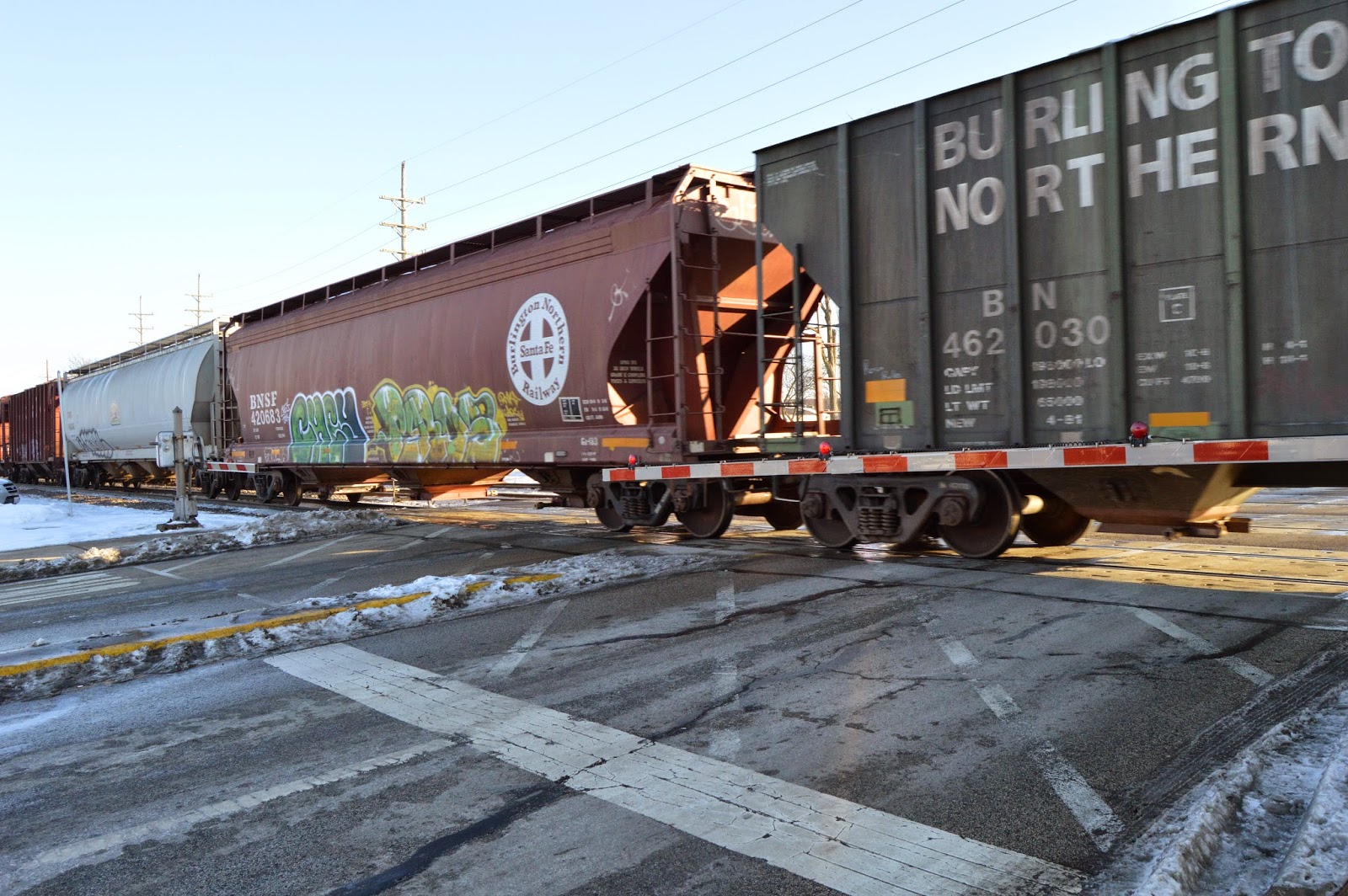 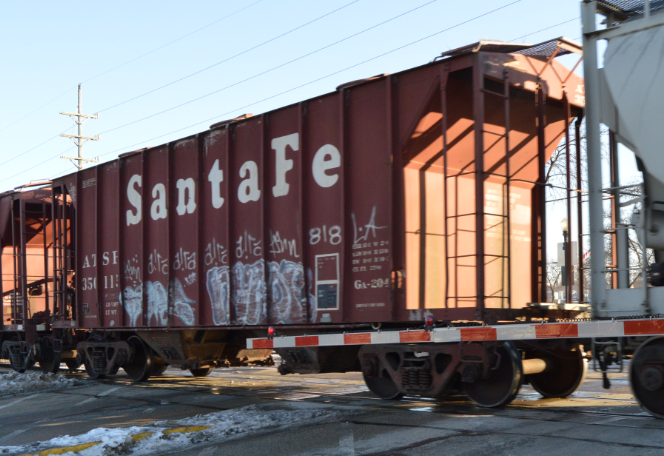 And soon afterwards, I saw the second 2-bay hopper that had not been renumbered. 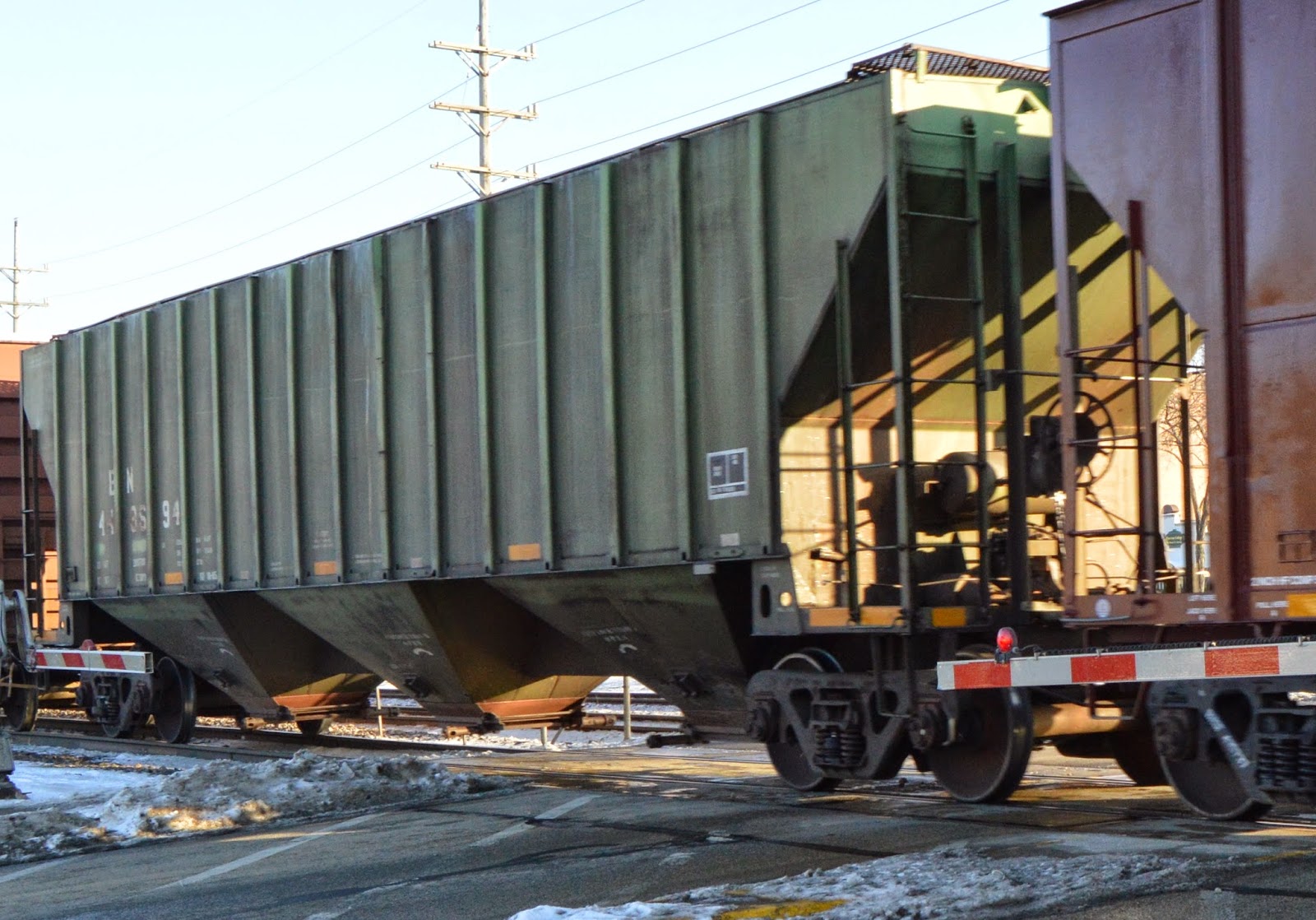 An unnumbered 3-bay hopper, which is typical. 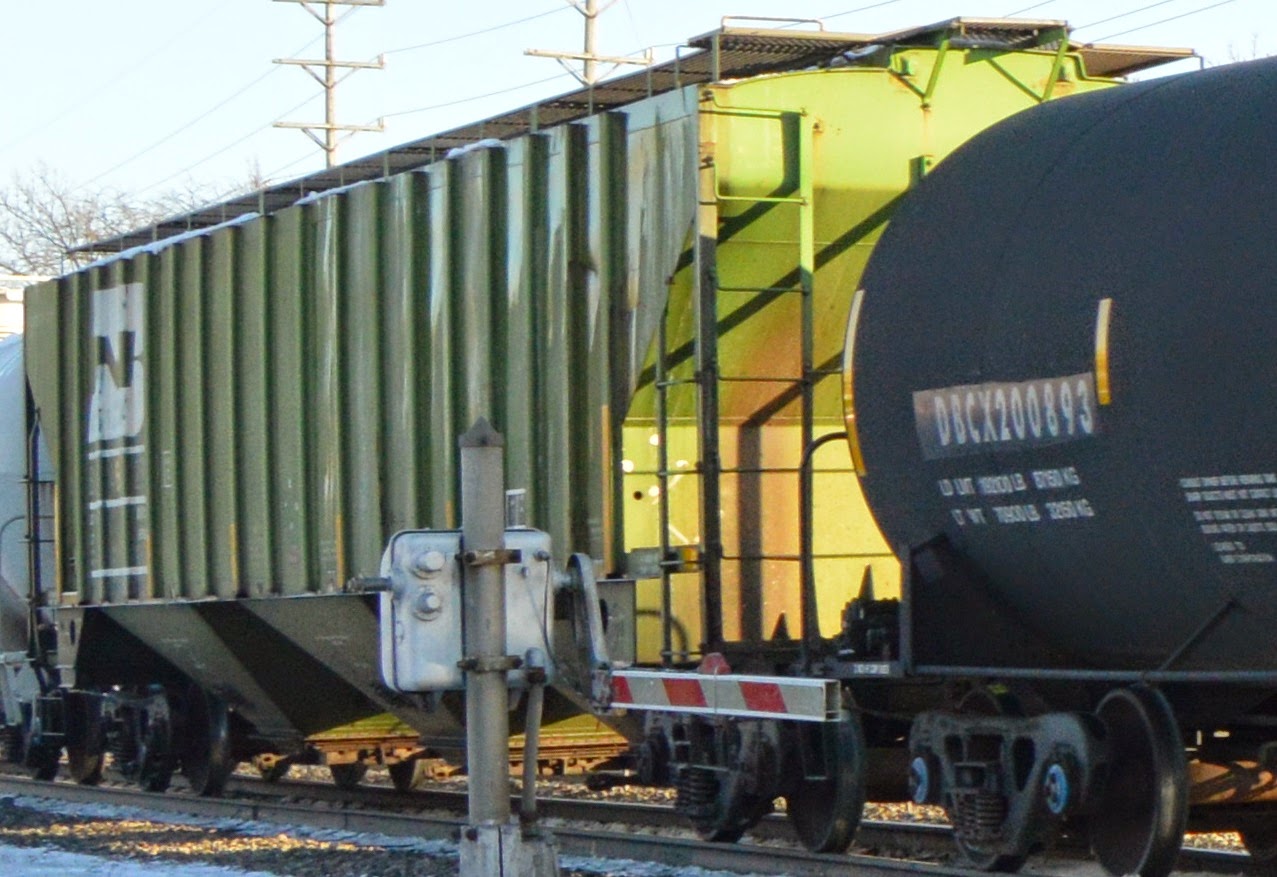 But then a third unnumbered 2-bay hopper. 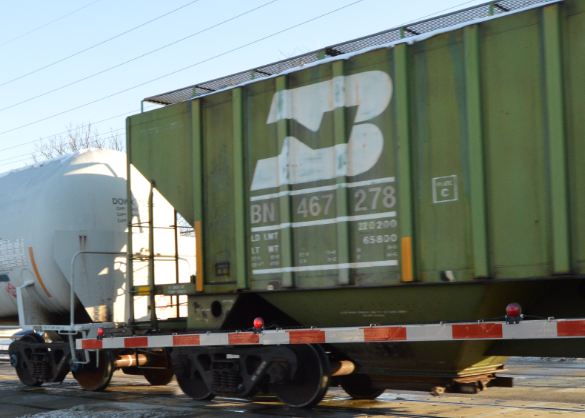 Posted by Dennis DeBruler at 4:23 PM