The Winter Garden Heritage Museum has a C&O caboose on display next to the museum's former ACL depot. It was built in 1948 and retired in 1984. 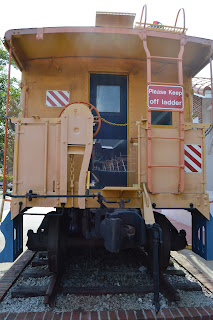 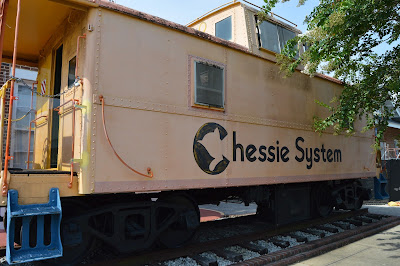 It has friction bearings, so it would not be allowed to run on today's railroads. Because it was open and because it was retired rather than altered to another use as a yard office or business car, I took some pictures of the interior. In the overview shot below, the stove is not well lit. There is no window in this quadrant. But we can see that they heat at least coffee and popcorn on it. 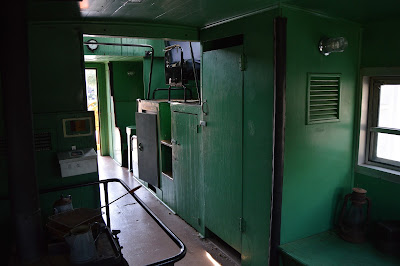 In another shadow in the lower right is a lantern. I'm glad that it has not walked off. In the far quadrant, we can see a dining area. The black chair in the top middle is obviously up in the copula. I assume the close door is a closet and the far door is a refrigerator. Below are closeups of the dining area and copula. The dining area was probably also used by the conductor as a desk to do his paper work. Very few computers existed in the world in 1948. The quadrant with the sink is opposite the dining area. 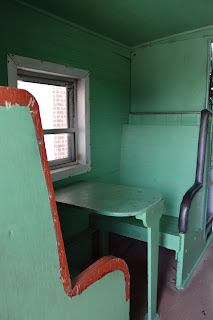 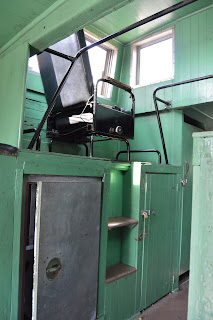 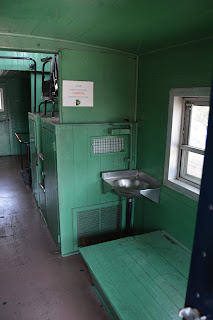 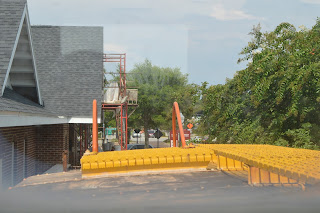 The view out the copula window shows the top of the ladder and part of the brakeman's walkway across the top of the car. I'm surprised that a 1948 car would be built with this because having to walk the train to apply the handbrakes was made obsolete by the invention of the air brake in the 1800s. I notice in the end view picture at the top of this posting that the brake wheel for this car is not on top of the car but on the platform. Was this car converted? More likely, it was hand braked from the platform, but the ladder and walkway was provided to access the other cars because an initial study of handbrakes indicates the brake wheel was  near the top rather than the bottom until after the 1960s.

Posted by Dennis DeBruler at 3:51 AM