One of the exhibits in IRM's exhibit car is about the Union Station. They displayed one of the two train boards for the Pennsylvania Railroad showing information about their long distance trains. The train boards and information desk in front of it were installed as part of a remodeling done in the mid 1950s. So the train numbers and names on the board match those of the Pennsylvania Railroad's employee time table No. 60 effective October 30, 1955. However, by the time the boards were retired many of the trains had been removed. But you could still see a trace of the numbers and names of the removed trains. I took a picture of the train board wondering whether or not the faint traces would show up in the photo. 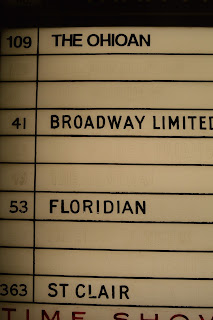 I can see the traces if I zoom in on the picture, so I uploaded this picture to Flickr. The "large" image does have enough resolution to see the traces. My reading is the following:
Since railroad timetables are considered collector items, I was not able to find timetables online to determine the routes of these various trains.

The rest of the Union Station display consisted of a wall of photos. Because of the width of the car and the widest angle of my lens being 18mm, I had to take two photos to capture all of the pictures. 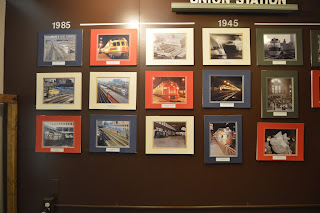 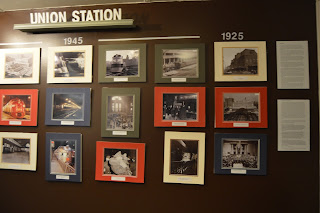 The first picture above in this posting is a closeup of the one in the upper-left corner of the first photo (third column in the second photo). It is a view of the pre-1969 station that I had never seen before. The shutter speed of the picture of the top text block was 1/13th at 52mm, and it was a little blurry. But the the second text block came out very blurry even though the shutter speed was 1/15th at 45mm. So the first picture proves I can keep still, but the second picture proves I have to concentrate on being still with slow shutter speeds or try an ISO above 800. Instead of using blurry pictures, I transcribe the text (with some of the punctuation being fixed but not the sentence structure issues):


The history of Union Station started in 1861 when the tracks of the Pittsburgh, Fort Wayne & Chicago ("Fort Wayne") were laid between the Chicago River and Canal Street and a two track station was built between Madison and Adams. This station burned down in 1862 but was quickly rebuilt.

In 1866, a new railroad entered Chicago from the southeast. The Chicago & Great Eastern was built along Western Ave. north to Kenzie Street then east to Canal approaching the "Fort Wayne" from the north. This railroad latter became known as the Pittsburgh, Cincinnati, Chicago & St. Louis or the "Pan Handle".

In 1872, the Chicago, Milwaukee & St. Paul (The Milwaukee Road) was built south from Milwaukee to Western Ave. in Chicago connecting with the Pittsburgh, Cincinnati, Chicago & St. Louis ("Pan Handle"). An agreement was reached allowing the Milwaukee Road access to the "Fort Wayne" station.

The three railroads quickly out grew the station so in 1880 plans for a new station were proposed between the "Fort Wayne, "Pan Handle", the Milwaukee Road, Chicago, Burlington & Quincy (The Burlington Route) and the Chicago & Alton (C&A). The "Fort Wayne" would own the station and the other railroads would be tenants.

In 1882, Chicago Union Depot opened for business on Canal Street betwen Adams and Monroe. It was the most modern station in Chicago.

But three decades later, it was bursting at the seams and was the oldest and smallest station in Chicago. So in 1913, the "Fort Waybe", "Panhandle" (both will be taken over by the Pennsylvania by 1921), Burlington Route and The Milwaukee Road entered into an agreement to share ownership of a new Union Station. The C&A was once again a tenant.

In 1925, Chicago Union Station was designed by Graham, Burnham & Company was opened to the public. The building would span Canal Street with the Great Hall waiting room on the west side of Canal. The headhouse or concourse building on the east side of Canal between Jackson and Adams.

In 1969 the concourse building was torn down to make way for an office building. On May 1, 1971, Amtrak took over passenger rail operation in the United States. In 1972, all Amtrak trains were now arriving and departing from Union Station.

The Present and Future

Today, beside Amtrak, Union Station hosts 6 Metra lines: The BNSF (Aurora), The Southwest Service (Manhattan) The Heritage Corridor (Joliet), The Milwaukee North (Fox Lake) and West (Elgin) lines and the North Central (Antioch). It is the 3rd busiest train station in American [sic] only surpassed by Grand Central Terminal and Pennsylvania Station in New York. If it were an airport, it would be ranked among the top 10 in the nation. It handles 120,000 passengers a day with ten tracks coming into the station from the north and fourteen from the south and two pass through tracks. Currently all trains terminate in Chicago with no trains passing though [sic] Chicago. During a week day on the north side there are 142 arriving and departing Metra trains, 14 Amtrak trains to/from Milwaukee and 2 Amtrak trains to/from St. Paul Seattle. On the south side, there are 130 arriving and departing Metra trains, 10 Amtrak trains to/from Michigan, 16 Amtrack trains to/from various Illinois cities and St. Louis, MO) and 14 long distance trains to the East, West and Gulf Coasts.

With a projected 40% increase in traffic by 2049, research is underway to improve for Union Station. The City of Chicago has identified some short, medium, and long range solutions.

Several short term station improvement projects currently have funding committed, or are in process for implementation during the next few years. These include enhancements to the station's entrances and expansion of waiting rooms by Amtrak, as well as two upcoming CDOT projects to improve bus lanes on Clinton and Canal Streets and create an off street CTA bus terminal on Jackson Blvd. between Canal and Clinton.

The study also proposed several ideas for medium term improvements to be implemented over a 5 to 19 year horizon. These ideas include reallocating the space currently occupied by some baggage platforms to allow the widening of commuter platforms, converting unused mail platforms to allow their use by intercity passenger trains, reorganizing existing passenger station facilities to improve capacity and flow, and rebuilding the Canal Street viaduct above parts of the station in a manner that improves street access to the station concourse below.

The study's long term/visionary ideas include concepts for further increasing passenger capacity and improving the traveler experience by significantly expanding or completely replacing the existing intercity and/or commuter station facilities in the 200 or 300 blocks of South Canal Street. The study has also investigated the concept for adding additional track and platform capacity in one of two alternative underground alignments, Clinton Street or Canal Street.

As Chicago's last surviving station of the golden era, Union Station has a rich history and an exciting future.

Posted by Dennis DeBruler at 10:05 AM