(See also Lumber District)
I first spotted Lumber Street on a Google Road Map as a road that goes along the west side of the Chicago River South Branch. I was thinking of using it to get better pictures of the two Strauss Trunnion Bascule Bridges in that area. This picture not only shows the two bridges, but the north terminus of Lumber Street at Roosevelt Road. However, since I read in Facebook that a railfan got challenged taking pictures of the Metra yard while on that road in the 1970s, I have been reluctant to go on that road. If they were bothered by non-employees being down there in the 1970s, I don't want to learn what they are like now after 9/11.

I'm reminded that the original industries along the west side of the South Branch were lumber yards and grain warehouses. Since Illinois had a prairie instead of a forest, lake-going ships brought wood from Wisconsin and Michigan down the river and stocked the lumber yards. The lumber was used to help build Chicago and it was shipped down the I&M Canal or railroads to help build the rest of Illinois. Importing wood to the state was especially heavy during the rebuild after the 1871 fire.


My third encounter with Lumber Street was during the study of maps for the CB&Q Industrial Park. Note that the street had been established before the early 1860s when the South Branch Dock Co. sliced up the road with dock slips. 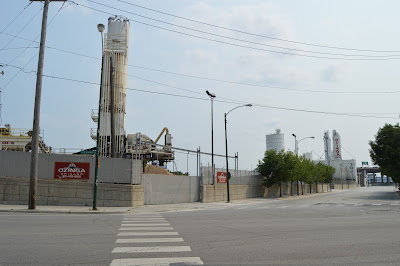 My fourth encounter of Lumber Street was a July 22, 2015, Chicago Tribune article --- "Lower Wacker car race ends in death." A few days earlier the Tribune had an article about how teenagers would show off their cars on Lower Wacker Drive as they had been taught by movies such as the Fast and Furious franchise. Two drunk kids were racing and one of them learned his 1999 BMW could not do "magical" maneuvers.

The article mentioned "a stretch of road near a cement factory popular with drivers who like to drift." A kid had asked on Facebook "Who's at wacker & ozinga tonight??" The article then mentions "a cement company off Cermak Road and Lumber Street where drivers often go after police chase them from Wacker." I had taken a picture of the Ozinga concrete plant, but it also includes a view of Lumber Street south of Cermak. Fortunately, no one was drifting on the Sunday afternoon when I visited.

Posted by Dennis DeBruler at 8:01 PM