(Bridge Hunter, Historic Bridges, HAER) At the turn of the twentieth century, Chicago built quite a few Scherzer Rolling Lift Bridges for roadways. Cermak Road Bridge is the only one that is left. (Joliet still has four left. And there are still some rolling railroad bridges in the area.) It was built in 1906 and rehabilitated in 1997. It has a span of  215.8 feet. George W. Jackson was the contractor of the superstructure.
Because of the 1997 rehabilitation,  the deck and superstructure are "Very Good" (8 out of 9), but the
"Appraisal" is "functionally obsolete" and the sufficiency rating is just 56 out of 100. I assume that it is "functionally obsolete" because it has only one lane in each direction. (But they are big lanes, I wonder if these were two lanes in the horse-and-buggy days when it was built in 1906.)
Normally this would be a big issue because Cermak is an important street in Chicago. In practice, this is currently not a problem because the overpass to the east for NS/Pennsy and Metra/C&WI tracks into the 21st Street Crossing also forces traffic to use just one lane.

This "west portal" shot was cropped from the picture on the right. I include the overview picture to remind me that there is plenty of parking available on Sundays. I'm glad at least some other cars were parked here or it would not have occurred to me that you could park in a marked lane of traffic. I did look around, and I could not find any "no parking" signs. Since only one lane of traffic can cross the bridge, why is this block lined as two lanes anyhow?
Unfortunately, the picture on the right is a reminder that I need to cross the street when a shot is backlit.

I took the picture to capture the clever design of the counterweights. They can make gross adjustments to the weight by slipping a concrete block onto a peg near the end of the weight and they can fine tune the weight by adding blocks near the bridge. I have read that whenever Chicago adds another coat of paint to a bascule bridge, they have to add weight to the counterweights. The picture also shows the round girder on which the bridge rotates as it is raised. 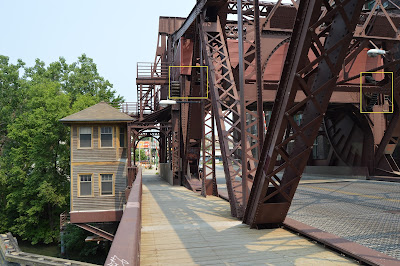 This picture of the bridge tender's house also includes views of the final driven gear and the attached pinion gear. I added the two yellow boxes to highlight the gears. 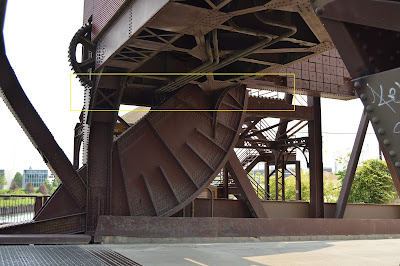 The pinion gear engages a rack that is on top of the horizontal girder under the machinery room. You can see the rack's teeth on the right side of the yellow box.

Since the HAER photographer was allowed to climb on the bridge, I highlight three of the fifteen pictures he took.
In the right-most picture, in the far corner of the building, you can see the final driven gear that sticks out of the building. 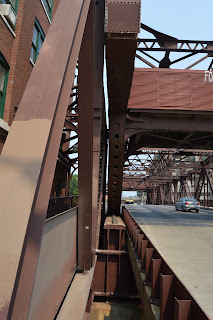 I took this view to show the girder on which the curved member rocks. Unfortunately this shot does not let you see that this base girder must be at least six feet deep.

I tried overexposing the shot on the left so that you could see down alongside the base girder to see its depth. But I wasn't  successful. The depths would need a lot of overexposure. 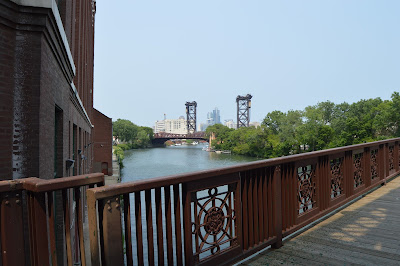 Chicago's rehabilitation of the bridge respected its historical significance and retained the character of its handrails. The Canal Street and Canal Street RR Bridges are in the background.
Update:

Glenn Anderson caught the bridge in a raised position.
Posted by Dennis DeBruler at 5:43 AM