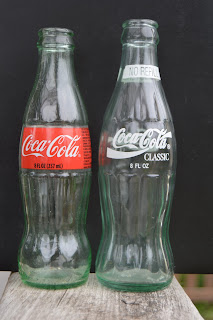 I was researching who owned the company that made bottles in Terre Haute, IN because I knew that company was the one that invented the trademark shape of the Coke bottle. The answer is Chapman S. Root. But the story of the bottle's shape is interesting in its own right. Coke started as a soda fountain drink in 1886. (When I came to Downers Grove, there was a soda fountain in the back of a drug store on Curtiss Street. It is now gone. I don't know where any soda fountains are now.) In 1889, two Chattanooga lawyers traveled to Atlanta to get the rights to bottle the product. By 1920, over 1,200 bottling franchises were established. Sales were so successful that competitors imitated the trademark "to deceive the public into buying their drinks." By 1915 they decided to develop a distinctive bottle. (CokeCo)


So, eight to 10 glass companies across the U.S. subsequently received a challenge to develop a “bottle so distinct that you would recognize if by feel in the dark or lying broken on the ground.” With that simple creative brief, the competition was on. (CokeCo)


In 1913, a machinist named Earl Dean came up with the Coca-Cola bottle’s original design, alternately called the “hobble skirt” or the “Mae West.” Ironically, neither the kola nut nor the coca leaf, two of the key ingredients in the beverage’s original recipe, is represented in the bottle’s design. Legend has it that Earl Dean mistakenly turned to the wrong page in the Encyclopedia Britannica, and based his sketches on the cacao tree seed pod. Its vertical ribbing and voluptuous curves are replicated in the contour bottle. (IndianaMedia)

Once a sketch was made at the library by Earl Dean, he worked through the night adapting the sketch to a hand machined mold depicting the curved cocoa pod as the center portion of the newly designed sample Coca-Cola bottle. With limited time remaining before the molten glass furnaces would be shut down for cleaning, Dean produced a few sample bottles that would be submitted to the national Coca-Cola bottle contest. (Wikipedia)


The Root Glass Company won the competition. This is a prototype. Before the design went into production, it was slimmed down so that the middle and base were of the same diameter and the bottle would work with bottling machinery.

Other companies also manufactured the bottle, but Root got a royalty --- 5 cents for every 144 bottles (Top40).  He became one of the richest men in Indiana.

The green color is because of the copper and minerals that happened to be in the Fern Cliffs sandstone that Root used as their source of sand. Other companies would have to add additional minerals to their sand to reproduce what became known as the Georgia Green color. (EarlyCoke) (Georgia was the home state of Coke.)

Posted by Dennis DeBruler at 3:36 PM

Email ThisBlogThis!Share to TwitterShare to FacebookShare to Pinterest
Labels: glass