Cermak Road Bridge was stuck in the upright position

I was heading East on Cermak Road to get pictures of the track still in Grove Street when I noticed the bridge was up. It was Saturday and the boats were scheduled to run to the lake that day. But that would have been hours ago. Was it stuck from that raising or has it been stuck for days? It was easy to park in the block that had the barricades. But I should have stepped out of the car to take the following picture because I got a lot of glare from the windshield. 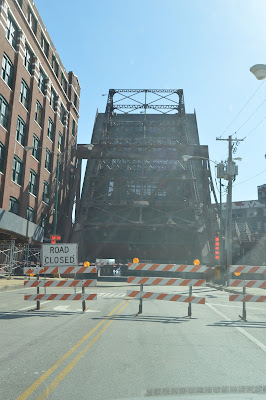 They had moved quite a bit of equipment in place so that they could work on it. Chicago had replaced all of the other Scherzer Rolling Bridges in town because the foundations were a maintenance problem. This bridge was totally rehabilitated in 1997. One wonders what went wrong. 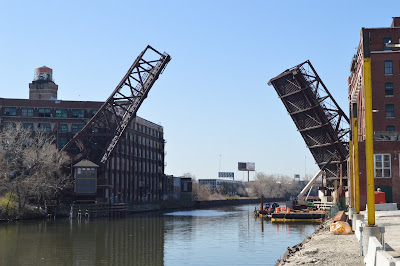 It was still stuck when I took a video of the Canal Street RR Bridge going up an hour later. Look under the left side of the span.

Posted by Dennis DeBruler at 4:09 AM