(Update: In Chicago, I only see Red Eyes (absolute) because they are protecting a junction: Tower A-2 and CP Morgan.)Lawrence Smith: Speaking of signals on old Ft wayne Div., PRR had ABS signalled w/current of traffic but never had cab signals or ATS like NYC did. FWD was slated for installation of cab signals but got it deferred during WW2 and PRR avoided it thereafter, at least W of Crestline. Amazing that with the speeds achieved on the FWD they got away w/it.
The signal in the photo caught my eye. The top signal is a standard Pennsy positional signal that can display the traditional semaphore aspects of vertical, diagonal, and horizontal. The bottom signal can display only one aspect, and it is a rather abnormal "back slash" or lunar aspect.

In a comment, Ken provided a photo of the front of that signal. Note it uses three yellow lights to display an aspect, in this case vertical. Typically, this is an "all clear" indication, which means the train can pass the signal at track speed and the next signal should not be indicating a stop. Pennsy was the only railroad that used these three yellow bulbs in a row to show aspects. The following two signals in the IRM collection show these original lighted signals.

Their sign below says the lights are white, but they always look yellow to me. 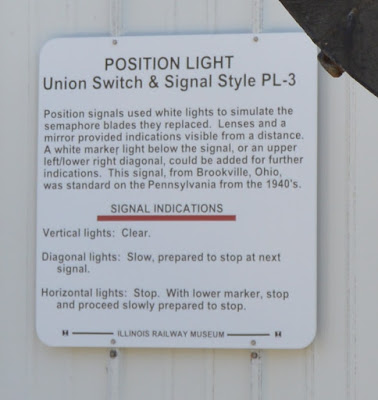 It seems that Pennsy evolved their "stop" aspect to take better advantage of lights to make it more distinct by leaving the center light dark for a "snake eye." Ken then caught a "stop and proceed" indication (below):

Dan Ferris commented on this RailPictures photo. I thought the two red lights were a B&O signal. But Dan Sorce explained "Both of those are Pennsy PLs - these ones have received the "red eye" conversion for STOP. "

To summarize, it appears the horizontal aspect originally was three yellow lights, then the snake eye that left the middle light dark, then the red eye that used red instead of yellow for the two outside lights.

I observed that they look white and the "stop" is not a "red eye." Jack explained:


Dennis, if you enlarge the image; you will find that the signals are (amber) as they should be. The only places that the stop aspects are red on the Middle Division are at interlockings or control points.

In other words, they use red eye for absolute stop and three horizontal ambers for permissive block signals. Since I do most of my railfanning in urban areas or at junction towns, that would explain why I have not seen three horizontal lights.


1915 - Dr. William Churchill of Corning Glass developed a pale yellow "fog-penetrating" glass, which the PRR then used in their PL signals. (3)
1915 - The Pennsylvania RR introduces (experiments) with the first version of the PL (position light) signal and it is nick-named a "tombstone" signal because the top of the signal was round and the signal resembled an old tombstone…… also, later adopted on it's affiliates the N&W and LV  (9)
1917 - The Pennsylvania RR changes the shape of the "tombstone" signals slightly so they do not present as much wind loading as the older style… they also used "stepped" voltages of 11, 6, and 4 volts to adjust for day, twilight, and night (and these were manual adjustments made by the signal guys) (9)
1918 - The Pennsylvania simplifies the design of their PL signals, eliminating one of the four "heads" for each aspect (9)
1921 - The Pennsylvania RR's PL's started taking the shape and configuration were are accustomed to today. (9)
Late 1940's - The Pennsylvania RR has converted 97% of their signals to position light types (9)
Mid 1950's - Some bright management type decided that the Pennsy PL lights should have two horizontal red lamps for the stop aspect instead of three horizontal yellow, so, now the red indication seemed to "disappear" when they had fog (8)
[Timeline]

We take the round heads for Pennsy's Position Light Signals for granted, but the above shows it took a while to develop them. I wonder what the earlier heads looked like. Especially the original "tombstone" head.
A posting with examples in the comments.
Robby's posting from Racine Avenue with two Metra trains.
An album of position light signal heads. (source of link)
The proper term for a red-eye is "Position-Color Light." [RailroadSignals]

Mark Hinsdale also shows that Pennsylvania is good for finding intermediate (permissive) signals. Note only is the stop aspect three horizontal lights, there are millage markers under each head.

Tim Pavlic II posted three photos with the comment: "Tipton is about to go."
Joe Harbula More history in the dumpster...
Paul Alisea Reality Boys - them babies are heavy ! I mean just the signal heads are heavy in themselves. I'd like to have one but I couldn't handle it because of its weight. Some will be saved, and already HAVE been saved, but this old man couldn't handle one - maybe a single lamp unit (which I have) . Good luck to those who can get one and handle it :)


The new signal system was cut into service today between CP-Gray (Tyrone) and CP- Antis (Altoona). The automatic block signals at 225 (Tipton - PRR era signal bridge), 227 (Fostoria - PL signals on a new bridge), and 230 (Bellwood - PL signals on a new bridge) have been retired and removed. With this cut-over, the new signal system is in service from Harrisburg to Altoona. Signal retirements and cut-overs will continue west of Altoona toward Pittsburgh and Conway very soon.

Posted by Dennis DeBruler at 1:10 PM