While analyzing the IHB route for replacement diamonds, I discovered that it went over a track near the Sanitary and Ship Canal of which I was not familiar. It turns out the MWRD has its own railroad to take sludge from its Stickney Water Reclamation Plant to its drying lagoons, which are down by Hodgkins between the canal and river.
I attended an open house at the Stickney WRP on May 21, 2016. I learned that the current term for sludge is now "biosolids."

The biosolid cars are shoved through the output part of their centrifuge building. The biosolids will spend 6-18 months in the drying fields. The Maggie Daley Park used a lot of these biosolids because it helps grow strong turf that can stand up to kids playing on it. They were also used to help turn railroad tracks into the Ping Tom Memorial Park. Biosolids are also effective in restoring damaged land such as surface coal mines and the slag piles on the south side of Chicago.


A closeup of a biosolids car. I took these pictures out of the window of the bus that was taking us on the tour. I'm glad the glass did not confuse the auto-focus or cause glare.

On the north side of the loading building are empty cars waiting for their loads.

When they updated the controls for their locomotives, they saved one of the old control stands so the kids can touch something during the tour.
After the tour, I drove down Laramie Avenue to Ed Meyer Road. The sewage plant did not smell, but Koppers did.

They have changed the color scheme of their caboose since Steven took pictures in 1989 below.

The chain link fence is a frustration, but can you imagine a Class I railroad having a logo this complex on their equipment in the 21st Century? 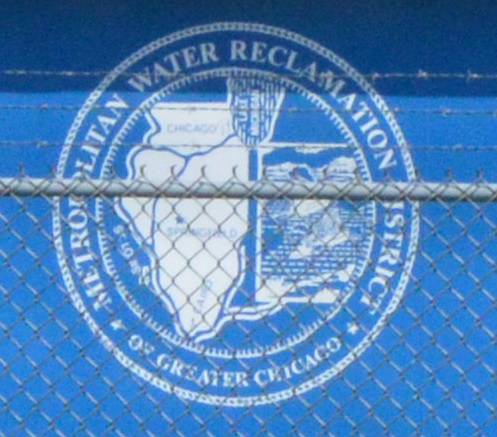 Unfortunately, another closeup of a chain-link fence. But that is the first Jordan Spreader I have personally seen. A reminder that people use their toilet year round and that they can't stop hauling biosolids because of some snow. 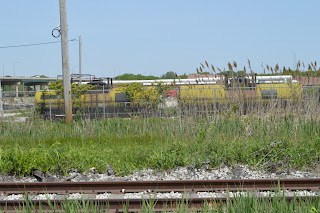 They said they don't use any chemicals to treat the water, just different bacteria to "eat" the solids. But these are two of the five tank cars I saw on their tracks.
Update:
Jacob has also caught 1&2 and 4. He reports that unit 4 is out just a week or two a year.


Hauling that Poop is the Sanitary District of Chicago RR. The power seen here is a pair of vintage EMD SW1's which are in immulate shape and were built in the late 1940's. There was another pair of SW1's down the street at the Manufacturer's Junction RY in Cicero, IL, but those have since been scrapped. The RR'S sole purpose is to haul human crap from their processing plant to drying ponds a few miles further down the line. The human excrement is carried in side dump cars and the RR is totally independent, never leaving their own property. 7/27/2015, Summit, IL.

Dustin Miller Appropriately numbered 1&2.
Mike Holuba They don't interchange any traffic but they do have a connection to CN.
George Melvin Very cool and they will never run out of product to haul, this industry can't be moved overseas!

Junior Hill posted with the same comment.
Jeff Delhaye They call it "New Earth"
Jacob Metzger It’s such an awesome operation.
They unfortunately don’t use the SW’s anymore.
Greenwood Vytautas Champ What is the current power?
Jacob Metzger MP15DC no. 4:
It has enough horsepower to pull 26 cars, while a single SW1 pulls 13 cars. [see his photo below]
Jacob Metzger In addition, the SW1’s have had varying problems. No 3 had crankshaft and water pump issues, no. 1 has a bad electrical system.
Michael Matalis When the IC used to handle this stuff to southern Illinois for land reclamation people joking referred to the trains as ICBM's.
David Jordan Junior Hill Michael Matalis I came across a Peoria Journal Star article on this dated March 20, 1974 stating rail shipments of sewage to an abandoned strip mine in the Shawnee National Forest between Harrisburg and Marion were set to start in the spring. I wonder how long this lasted?
Erik Coleman There's a septic field near Arcola that took in the crap for a while. The field is still there but the switch was taken out in the 80s.
Erik Coleman There was the apocryphal story that one of the tank valves of the "ICBM" was loose as a railfan was photographing along the curve near Buckley on the IC, so the crew said "I guess the sh*t hit the fan!"
Dennis DeBruler I wonder when they switched from barges to trains to ship the "fertilizer" to their downstream farms. The farms are now used for runoff reduction research.
https://industrialscenery.blogspot.com/.../mwrds-soil...


A follow up to Junior's post about the Chicago Sanitary District Railroad, owned and operated by the Metropolitan Water Reclamation District of Greater Chicago.
Taken in La Grange, Forrest View, Stickney and Lyons, Illinois up and down their right-of-way over the past several years.

[The comments indicate it is pretty easy to get permission to shoot because of "public remit."]

Their railroad is a thirty-mile shortline that has four locomotives and 156 railcars. (The Chicago River An illustrated History and Guide to the River and Its Waterways, 2nd Edition, 2006, David M. Solzman, p.207) David also mentions there is a barge loading facility so that sludge can be shipped by barge. So I looked for it, and I believe this is it.

A video of the sludge cars being dumped. They appear to be air dump cars but it looks like the load is heavy enough that they need help to get the dump started.
CSDX SW1 #1 coming out of hiding brought out the railfans. This was posted on the same day.
5 images of a train returning after it has dumped its cars

Posted by Dennis DeBruler at 11:38 AM