Bill Molony posted again.
Bob Lalich Only one Q1 was built. The Q2, with 4-4-6-4 wheel arrangement, was a follow on. They were used regularly on the Panhandle line out of Chicago.

Was that "inverted V" shadow in the aerial photo a coaling tower? I believe it was. You can see part of it on the left in the above photo. In this comment that Bill added, you get more glimpses of the tower. 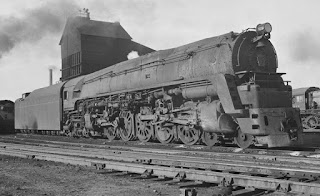 Posted by Dennis DeBruler at 11:03 PM