(Satellite)
While studying Nerska Junction, I learned that east of that junction was BNSF/Santa Fe's Nerska Yard. So while I was on the Pulaski Bridge trying to take morning shots of the BRC Bridge, I walked farther south to check out the Sante Fe tracks. This is when I realized I was waking over Nerska Yard.

Looking east, you can can see the eastern throat of the yard. I learned that an early morning sun causes a lot of haze even if the day was not very hazy. This is my first experience with morning sun because I normally sleep until about 11:30am. (I typically get up and do stuff around 4:30am.) It doesn't help that the train was carrying white containers, but in the background you can see the train turning south to enter Corwith Yard.

Looking at satellite images (Google and Bing) and my photos, you can see this is still an active yard. While I was taking pictures from various bridges across the Chicago Sanitary and Ship Canal, I estimate that I saw four intermodal trains head to Corwith. And that was on a Saturday. 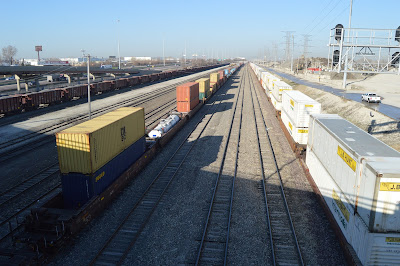 Looking West, I have the joy of the ugly shadow of the bridge I'm standing on. Oh well. The train on the right is the one on the move into Corwith. All of the J.B. Hunt containers reminds me that Santa Fe tore down their LCL freight houses and let J.B. Hunt build a freight sorting facility in their yard. The container train in the middle and the rock (ballast?) train on the left were parked. Note that the J.B. Hunt train is probably a Z train from LA, which is why it has priority over the parked container train. Given the miscellaneous nature of the containers and the fact that it is not well packed with double highs, it is obviously a lower priority train, perhaps from Denver instead of LA. (Packing each deep well platform with two containers improves the aerodynamics, and thus fuel usage, of the train.) The parked train is carrying international containers whereas J.B. Hunt is definitely a domestic train. 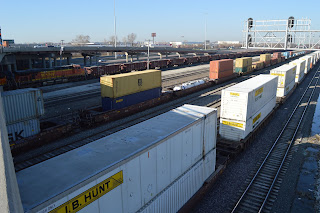 I took this shot to record that the rock train is parked because of its lower priority because it still has its engines. That is a lot of ballast. I wonder what track work BNSF is doing in the Chicagoland area. Or maybe NS or CSX wants to use granite ballast. However, the rock looks grey instead of pink. I walked further south on the bridge to get a closeup of the engines, but all I could do is determine that it had more than one engine. The closeup confirms the rock is for ballast because the cars have side discharge doors.


I zoomed into the west end of the yard to note that a train was running on the BRC tracks. We can also see some MoW equipment on one track and misc tankers and hoppers on other tracks. And we can see the end of the container train that is pulling into Corwith. Considering that the train could have already dropped cuts at the Logistics Park and/or Willow Springs, that is a long cut of containers for Corwith.


Posted by Dennis DeBruler at 8:24 AM