(Update: stages of growth, V numbers are vegetation growth and R numbers are seed (reproductive) growth. I still have no idea what "growing degree units" are.
I learned with the co-op in Brewster, MN, that some co-ops have scaled up with granular fertilizer rather than anhydrous ammonia.)

The comment for this video is more informative than the video itself: "Split shot application 40# (10 gallon) phosphate on the left side of the row and 140# N on the right side." Evidently the application rate unit is pounds/acre The nitrogen would be coming from the white amorphous ammonia tank being pulled behind the planter. (Is Anhydrous Ammonia and Amorphous Ammonia two terms for the same thing?) The phosphate would be coming from the tanks hanging from the sides of the tractor.  Limestone must periodically be applied because nitrogen fertilizer makes the soil acidic. [PSU] The need to apply phosphate to farm fields is one of the reasons we should not be flushing phosphate down our rivers.

Greg Fedoruk posted two pictures with the comment: "Can't wait for spring." The white tank would be amorphous ammonia because it is pressure resistant and the yellow bins would be at least phosphorus. He is injecting fertilizers into the soil. (There are three bins. Is he applying two other chemicals or is there a bin of phosphorous for each third of the implement's coverage?) Judging from the auger on the side of the bins, the yellow bins are carrying granular material.


I found my John Deere Secondary Tillage brochure to try to figure out what implement he is using. (The salesman I was talking to explained that secondary tillage is done in the spring.) It talks about a 2310 Mulch Finisher. It has a straight row of disks in front, followed by deep cultivator blades ("sweeps") followed by a tooth harrow. I could not find a date on the brochure.The 2310 may now be obsolete. The implement being pulled by the tractor looks like a single row of disks. In the spirit of no-tillage, the implement is designed for applying the fertilizer at a depth of 4.5" with a low soil disturbance. This allows fertilizer to be applied right after planting. It has a high frame so that it can also be used until the corn is over 30". Nutrient application now has its own brochure.

While driving east of Kankakee on IL-17, I spotted some field work being done.

It looks like there is a viable New Holland dealer in the area. Notice the big tank on the right. It is a tank truck parked in the field to refill the yellow tank on the farm implement. It does not contain amorphous ammonia because the yellow tank is not pressure resistant. 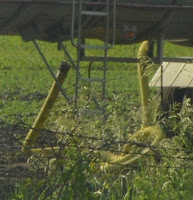 It appears a big 4 to 6 inch hose is used to reload the yellow tank to minimize downtime.

When I put away my John Deere Secondary Tillage brochure, I found a small brochure on the bottom of the pile for the 2510L Liquid Fertilizer Applicators. Note that the date on these pictures was June 3, 2016. So the farmer is adding the fertilizer after it has started growing. I've seen the term sidedressing.

Rather than buy a bigger tractor, he doesn't completely unfold the 2510L. It seems like John Deere could easily sell a cheaper version that left off the wings. Or maybe he has different fields with different soil conditions and this is a "tough soil" field.

Update:
This is the first time I have seen a planter of this vintage equipped for liquid fertilizer. I believe the two long bins are for granular fertilizer, and the four round bins hold the seed.


A video of an Anhydrous applicator by "The Farmer's Life." The video has a profile format, which I hate, and has wind noise, but it is informative. He also discusses why he plants cereal rye for a cover crop between the cash crops while he is driving the tractor.

2016 Update on Fertilizer Transportation It refers to tables and figures that are not provided! The comments on the posting are more informative.

I can tell spring fertilizer and planting season is coming because I'm seeing some advertisements. This is for Micro Essentials.


Aspire Potash   Adds potassium and boron. Because I belong to some old tractor and combine groups, Facebook thinks I'm a farmer. I got another "suggested post" for Aspire. This is probably one reason why livestock farmers can save money by spreading thier manure back onto the fields, they put the trace minerals as well as major nutrients back on the field.

1.3B expansion of a fertilizer plant

In addition to different types of fertilizer, this unit must be doing pesticides and/or herbicides as well. But what really caught my eye was "mouse bait spreader." A video of the unit that can spread "3 dry products, 3 liquid products, mouse bait spreader" in one pass. "Roughly 300 litres of hydraulic oil a minute is required to run the whole system."

A proposal for a billion-dollar liquid fertilizer plant in Longview, WA, puts into perspective that fertilizer is a big business. It will provide only 100 "family wage jobs." That is a capital/worker investment of $10,000,000. I wonder how much of the equipment in the plant will come from USA vs. Japan, Germany and/or China.

Posted by Dennis DeBruler at 11:11 PM