(Bridge Hunter; B&T, Blog; Satellite, Tim Priest must have had a rather wide-angle lens because his photo captures over half the length of the dam.)
The Kentucky Dam and Lock is the furthest downstream dam on the Tennessee River, and it is the longest at 8,422 feet. Its height of 206 feet creates the largest lake east of the Mississippi with 2,064 miles of shoreline and about 160,300 acres of water surface by backing up the river 184 miles. To maintain the 9-foot depth required for commercial traffic (barges and their towboats), the winter target elevation is 354 feet. The summer target is 359'. The record flood level was set May 4, 2014, at 372.5'. The top of the gates are at 375', and the TVA requires that permanent structures be built at least 381' above sea level. The record low was 348.02' on March 11, 1961. Construction started in 1938 and construction must have continued during the war because it was completed in 1944. The reservoir finished filling in 1945. (KentuckyLake/facts) 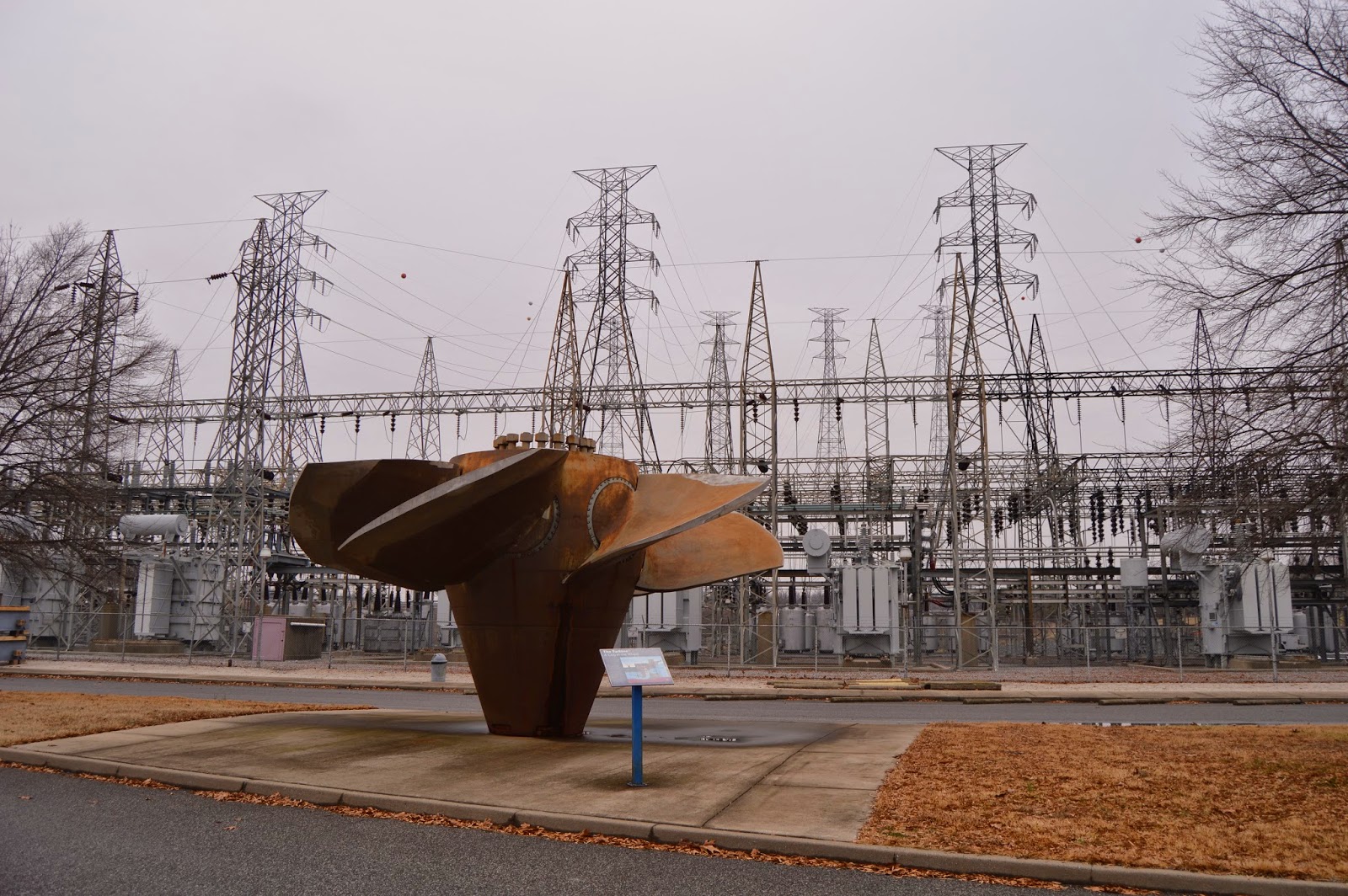 Its five generating units can produce 184 megawatts on an average day. They have a Kaplan turbine out in the parking lot of the visitors center. Below is an image of the sign that is in front of the turbine. There is a better version of this graphic and other power related images in KentuckyLake. Each turbine/shaft/rotor assembly weighs 220 tons. 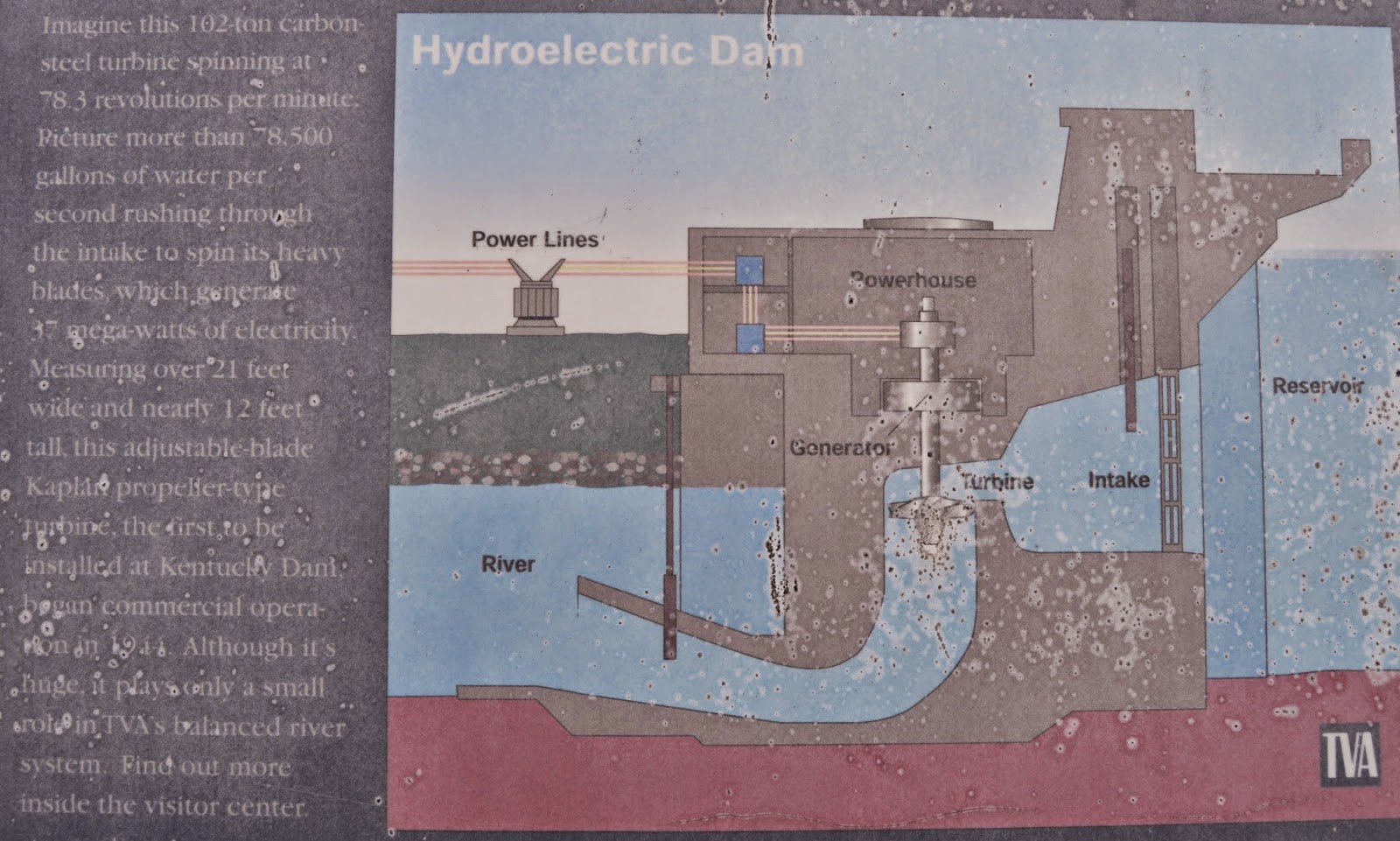 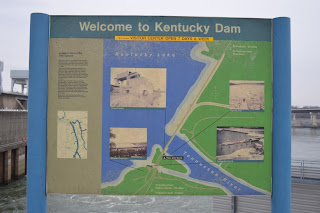 Even though the Visitor Center was remodeled in 2012 and the sign says "open 7 days a year," there was a sign on the Visitor Center's door indicating that it was closed until "further notice." I discovered that the centers are open except during high security alerts. (Is this link now, 20161220, broke because the center is open?) But I have not found out how to get a "further notice" and thus whether or not it would be worth trying to visit the center during later trips.

The control room is empty because the dam is run from Chattanooga. "It had been raining for days and the head technician, Jeff Ring, was upset with 'Chattanooga' because they had the spillway gates open even though the reservoir had not reached its capacity. The technician said 'We’re spilling without making power. We’re losing money by doing that'" [DailyYonder]

When the road reaches the top of the dam, there is a parking lot. So I got out and... 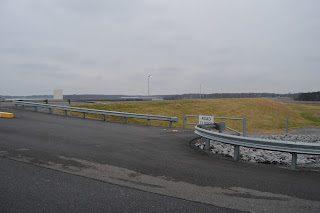 ...took a picture to the right of the landfill portion. 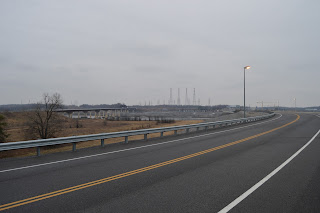 Then an overview to the left. I walked away from the parking lot so you see the road curve up onto the rock faced part of the landfill. In the background near the right you see the cranes working on the new 110x1200 foot lock. Scanning the background to the left we see the control structure of the dam, the four electric lines carrying electricity to where it is needed, and the bridge that helped move US-62/641 off the dam to allow construction of the new lock. 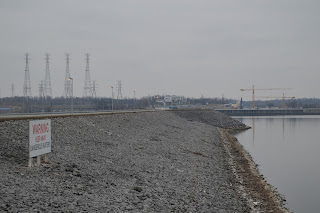 I then walked back to thhttp://industrialscenery.blogspot.com/2016/12/tva-kentucky-lock-and-tows.htmle parking lot as close to the water's edge as I could get. I'm used to seeing just one or two Extra High Voltage lines leaving a power plant. Four smaller lines reminds me that 1) this plant does not generate much power (199 Mw, brochure) and 2) the consumers are smaller towns spread across a large geographical area. 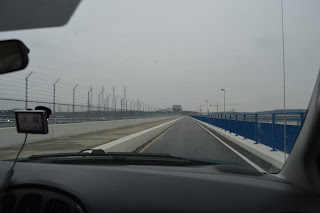 We then got back in the car and drove over the dam. 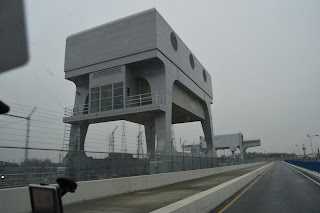 This allows you to get up close and personal. But we took pictures from the car because I was not going to stop in these skinny lanes. 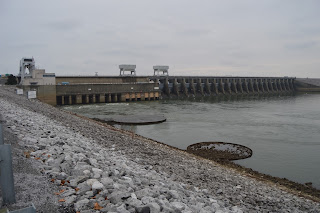 They have another parking lot down by the spillway because the Visitor Center is on the left of this photo. Note the two gantry cranes near the middle. They can roll across the top of the spillway and raise and lower the gates. The gantry crane on the left is a lot bigger than this view shows. 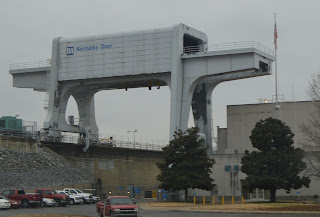 So I include a side view of that crane. This crane rolls across the type of the power plant.
I used a satellite image to confirm my theory that there is a hole in the roof above each of the five units so that this crane can be used to lift the generator, shaft, and turbine of a unit for maintenance/replacement work. 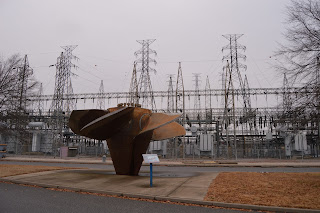 Zooming in allows me to count 11 discs in an insulator. My notes near the end of power lines indicates 12 discs handle 230kv. So the four lines leaving this switchyard are around 210kv. 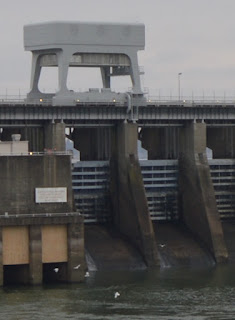 The gates are not the normal Tainter gates I'm used to seeing in river navigation dams. They look like sluice gates. The river flow was low when I visited because only three of the five hydro units were running. So none of the spillway gates were open. But in this picture below taken during the 2011 record flood, they are open. Since the gates are not visible, they must be lowered down inside the concrete spillway instead of the normal technique of raising the gate. (Update: my current theory is that none of the gates were opened. They were allowing the water to spill over the gates and thus force the level of the river to go up. That is because the Ohio and Mississippi Rivers were also flooding and they wanted to maximize the amount of flood waters that were stored in this reservoir.)

If they want a partial opening of the spillway, they probably open a few gates all the way and leave the others shut. (Update: this was confirmed by a photo of the McNary Dam.) That would also be less labor intensive because the gantry crane would have to visit each gate just once. On the Mississippi, Illinois, and Ohio Rivers, I'm used to each gate being raised a foot at a time so they are normally pretty even. Here is an example from the Newburgh Dam. But those gates each have their own electric motor, and it is just a matter of flipping a switch in the control room to move a gate.

If you look at the third picture in Scout, you will see one gate of the Barkley Dam is raised significantly more than the others to fine tune the flow.

Kentucky Lock posted seven photos with the comment: "Lots of #sunshine today for ongoing excavation work at the #Kentucky Lock Addition Project on the Tennessee River in Grand Rivers! #NashvilleCorps is building a larger #navigation lock at the Tennessee Valley Authority project!

Lee Roberts"
Pickwick Lock shared
David Gulden shared
Craig Bohannon: Day late and a dollar short. Tonnage has been slowing on the Cumberland and Tennessee river for years.
National District posted a slightly different collection of photos.
David Gulden shared another collection of TVA photos. [Some of the comments talk about the waits to go through. One said they had to wait 48 hours several times.]

Feb 24, 2022: 0.24 video of dam spilling 1.5m gallons (200kcfs)
Jim French posted a 1987 photo with ICG locomotives pulling a freight across the dam. The comments discuss some rail to barge transloading operations in the area.
This PDF file describes the construction of the new lock.

Posted by Dennis DeBruler at 6:03 PM