CA&E calls itself a railroad, but it was actually an interurban. It was electric and it used the Metropolitan "L" tracks and terminal to access Chicago. I don't normally study interurban railroads because it is challenging enough to learn the regular railroads in Illinois. But since I live in the western suburbs of the Chicago area, the CA&E has special significance.
The Blackhawk Railway Historical Society posted seven photos with the comment:


After years of battling declining ridership and competition from the neighboring Chicago & North Western and new government-built freeways (which also resulted in them losing their direct line into downtown Chicago,) the Chicago, Aurora & Elgin ceased passenger service on July 3, 1957. Unfortunately, they came to this decision AFTER hauling about 6,000 passengers into Chicago during the morning rush…but in the day long before 24-hour news and text messaging, word was slow getting out, and when those same passengers hopped on the CTA’s Garfield Park “L” line for their connections to the CA&E at Des Plaines Ave., they found no trains to complete their journey home.
The “Roarin’ Elgin” ran freight-only for a couple years and was eventually abandoned and scrapped. Most of its right-of-way is now part of the Illinois Prairie Path bike and walking trail, and because the CA&E outlasted most of the other interurbans, quite a bit of their equipment still exists, including nearby at the Illinois Railway Musem and the Fox River Trolley Museum. But most of the people living alongside or exercising on that trail don't know a lot about the electric railroad that one ran there, or the events of 63 years ago today.

Greg Burnet Timely. The car in the picture (Car #316) is currently undergoing restoration at the Fox River Trolley Museum. In fact, I'm delivering over a thousand feet of newly milled components (window sills, exterior trim, etc.) to them next week for painting & will be milling a batch of new siding to replace the damaged material in the near future as well.


While railfanning the UP/C&NW in Glen Ellyn, I also checked out the old CA&E RoW that ran just south of the C&NW tracks. To the west of Main Street, it is a normal looking trail. Behind the "Glen Ellyn" sign in this street view is this sign about the CA&E. To the east of Main Street the right-of-way (RoW) went through what is now a parking lot so they moved the trail south of the parking lot. 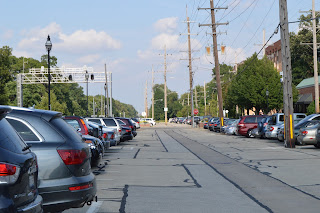 Note the high-tension line has its poles in the parking lot. That marks the CA&E RoW. The 4-disc voltage (66kv) of this line was state-of-art back when interurban railroads first started failing. So power companies would buy their RoW at bankrupt prices and build a power line along that RoW. Even though the state-of-art for voltages was a lot higher that 66kv in 1957 when the CA&E gave up, power companies seem to stick with these lower voltage high-tension lines in urban areas. 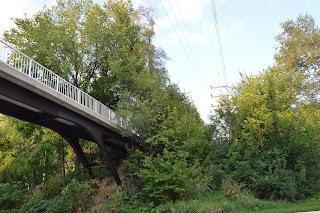 On my way home, I went south on Finley Road. When I saw this bridge above the road, it struck me that was a trail bridge, so I found a safe place to park and walked back to take a picture. Note the high-tension line is still using the RoW. Looking at a satellite image confirms that this is the Illinois Prairie Path - Main Stem. The Illinois Prairie Path was built on the CA&E RoW.

Update: Railroad Glory Days
A series of YouTube videos about the stations and  artifacts along the CA&E. (source)

Posted by Dennis DeBruler at 7:16 PM

Email ThisBlogThis!Share to TwitterShare to FacebookShare to Pinterest
Labels: rrInterurban