"The Met" and the Bridge to Nowhere

(Bridge Hunter; Historic Bridges; John Marvig; Satellite)
(Update: see Blue Line for the Garfield Park Branch replacement in the Eisenhower expressway. A virily.com posting)
A video of a Bruce Moffat presentation concerning The Met. He has three slides about the "bridge to nowhere" starting here.


Most anyone familiar with history and/or operations of the 'L' in Chicago is no doubt aware of the "Bridge to Nowhere." This bridge, located west of Paulina Ave near Kinzie on Chicago's West Side once carried trains of the HUMBOLT PARK and LOGAN SQUARE 'L' lines over the (north-to-south) C&NW (Galena Division) -- now UP, MILW (C&M Division) -- now owned by METRA and the PRR (PCC&StL) -- now NS.Although the 'L' is long-gone, the bridge remains. It is used to support the W/B approach signals for Tower A2, which is located at Western Ave, less than one mile to the west. The bridge (as I understand it) is still owned by the Chicago Transit Authority (and if that be true, it is the only piece of the 'L' system which actually MAKES money for CTA). The approaches are long-gone (removed circa 1964-65). Many people has seen and/or photographed this bridge -- but how many have actually seen a photo of a train on it?1. Contemporary photo of the bridge.2. A vintage photo (taken circa 1950-51) of what appears to be a Loop-bound HUMBOLT PARK or LOGAN SQUARE trn about to head across the bridge. Bernard Stone Photo. Krambles/Peterson Archives.

You can skip ahead to the information about the Metropolitan West Side Elevated Railroad.

The above was cropped from a photo similar to the following. This was taken from Racine Avenue while getting photos of Pennsy's positional signal heads before they were replaced with the PTC stuff at Control Point Morgan. The buildings on the left are the ADM Flour Mill. Their days are also numbered. 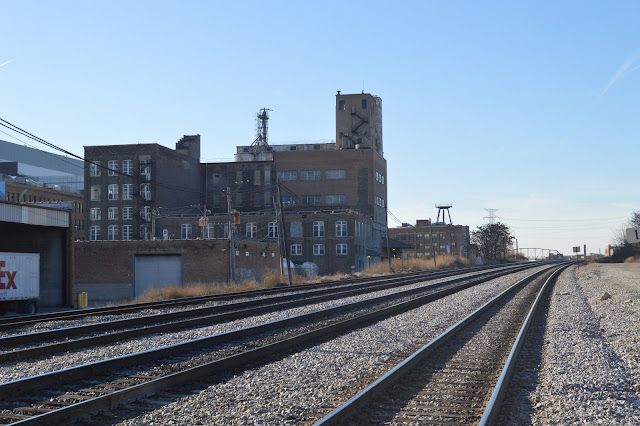 Dave Jendras posted three photos with the comment: "a bridge now used only for signals on Chicago’s west side....."

Lee Jones posted four photos with the comment: "Bridge to nowhere. On Chicago's west side off Lake Street."

The Metropolitan West Side Elevated Railroad was the third one built in Chicago and the first to use electric traction. [GarfieldPark] We have already seen the Met because it used the first Scherzer designed rolling bridge to access its Fifth Avenue/Wells Street Terminal. I include this 1898 map to make it easier to understand the routes of the Met.

The first thing one learns is that back in the 1800s, the north/south streets were numbered avenues because the main line, Garfield Park, ended at 48th Avenue in 1898. Using the BRC tracks as a reference, it appears that 48th Avenue is now Cicero Avenue.

Jon Roma commented on a post: (The comments on this post also talk about the abrupt shutdown of the CA&E during the noon hour on July 3, 1957.)

The Metropolitan West Side Elevated consisted of three routes. These routes either terminated at the Wells Street station (between Jackson and Van Buren), or circled the Loop "L" from a connection at Van Buren and Wells.

The routes were the Garfield Park "L" (the main line), the Logan Square "L" (with its branch to Humboldt Park), and the Douglas Park "L". This route was used by the Chicago Aurora & Elgin, all of whose trains terminated or originated at the Wells Street terminal and didn't use the Loop "L". The Metropolitan had a major yard at Laramie, and from that point westward ran on CA&E's track -- at one time operating as far west as to 22nd Street and Mannheim Road in Westchester!

Of particular interest were the two branches a little west of Ashland Avenue: Logan Square (discussed more below) turned to the north and Douglas Park turned to the south.

I include a detail of the loop area because it appears the Met started with a connection to the loop and added its Fifth Avenue/Wells Street Terminal later. The 1938 map below shows that the main line and the Douglas Park branch were extended. Furthermore, the CA&E connected to the west end of the main line.
Zooming in on the downtown connection, we can see that the Met connected to both its terminal and the loop. All of the CA&E trains went to the terminal.

Construction of the Milwaukee-Dearborn subway started in March 1939 using the deep bore method for most of the distance. But construction was put on hold during World War II even though it was 80% complete in 1942. Work resumed in late 1945 and opened on February 25, 1951. [DearbornSub]

The CTA took over all elevated and surface transportation in 1947. One of the first things it did was study the traffic through each station and on each branch because it wanted to close those facilities that did not generate enough revenue. Humboldt Park branch was on the "cut list." For political reasons, they could not just "pull the plug." So they reduced the quality of the service until the branch died. The following "bullet information" is from [Humboldt].

In case you thought I forgot that this posting was about a bridge, let's take a closer look at the Paulina Connector bullet item. First of all, one reason for including the 1938 map was to show that Lake and the Met were competitors for west side traffic in the 1800s. But after the CTA got control of all of the lines, they used the Lake Line to carry the Douglas Park (Pink Line) traffic into the loop. So the north/south segment of the Logan Branch south of the Lake Line is back in revenue service. The north segment, between the Lake Line and where the Logan Branch switched to the subway is abandoned. All of that abandoned segment has been removed except for this bridge. The reason the bridge is retained is that C&NW had hung signals on it while it was still in service. So the bridge now might be the world's largest signal bridge (Birds-Eye View, Street View)

Chad Brown posted three photos of the abandoned bridge. You will have to follow the link because at least one of them is copyrighted. Some of the comments are of interest.


And here is what went between this junction and the Chicago River bridge.


David H. Nelson posted three images with the comment: "I'm often pokin around on the hunt for pictures of old Chicago buildings and today I was in Google Street view screen-shotting the Brooks Building, W Jackson at Franklin (first picture) and on moving hte camera down Franklin to get a shot of the south side of hte building I noticed low building next door (second picture) and thought wait a sec, what is this???. It was once a substation. What makes it an item of interest for this forum is before the CTA starting shutting down terminal stations there was an elevated station immediately above this building. It was the terminal for a line coming off the westside. Basically it filled the gap above the substation, wall to wall left to right.. Entrance to the station was on the opposite side. The 3rd image is part of the 1950 Sanborn map."
Rick La Fever This was actually the terminal for The Roarin' Elgin. AKA, The Chicago, Aurora and Elgin Railroad also known as The Great Third Rail or Sunset Lines. It ran from this point through the Western Suburbs until it got to Wheaton Illinois.
At that point it split into two separate lines to run to Aurora and Elgin. It was abandoned at 1200 Noon July 3rd, 1957 stranding their passengers in the downtown Chicago area.
Bruce Moffat The single story building has always been a Rapid Transit substation and still is. The Wells terminal backed up to it at Street level and the platforms were overhead. Owned always by the "L". The CA&E was a tennant.
Paul Musselman It was originally a 'stub end' terminal for the CA&E....the Garfield El would pass this term. and access the 'loop' El by a connection on the west end of Van Buren...when CA&E was terminated, (along with the planning for Congress Exp'way) the stub end term. tracks were connected to the 'loop' at this point, and the west end Van Buren connection removed.
Mitch Markovitz The terminal was built by the Met "L" for their use as the Loop was becoming even then too crowded. When the agreement for trackage rights was reached with the Aurora Elgin and Chicago Railway the interurbans then began using Wells Street. Until 1951 Rapid Transit trains used the terminal for some Douglas, and Westchester trains. In 1955 the top floors of Wells Street were removed to allow the Garfield trains to access the Loop when construction of Wacker Drive dictated the removal of the old access.
Mitch Markovitz By the way Bruce Moffat is indeed the expert in this.

The abandoned bridge goes over UP/C&NW tracks on the north side of the easement and CP/Milwaukee+NS/PRR/Panhandle tracks on the south side.

Gary J Sibio shared another view of this bridge.

Larry J. Pearlman posted a photo taken from underneath the bridge.

While trying to find where the first picture of this UP article was taken, I discovered that the Blue Line uses a subway to connect the Logan Square branch with the new extension to O'Hare built in the median of I-90/94. The subway goes under Milwaukee Ave. then north under Kimball Ave. until it reaches the Kennedy Expy.

Arvy J. Novahtskee posted a photo and the comments contain a lot of information including a video of it burning in 1996!

VintageTribune photo of dismantling the Paulina Street Elevated
In Sept 2020, I got hit with a Double Doomsday. Both Facebook and Google changed their software. I said "changed" instead of "updated" because the new software is not better. In fact, Google's Blogger software is far worse except for a search function that works. For example, it has three bugs concerning photos and their captions. So I'm no longer copying photos and interesting comments from Facebook. I'm just saving the link. Unfortunately, some of the links are to private groups.
Another brief history of the bridge   This includes a photo of the Logan Square Terminal that was replaced by a subway station.

Posted by Dennis DeBruler at 9:35 PM