I've noticed in a all of the older pictures of workers on a railroad or in a steel plant that no one is wearing safety protection equipment such as hard hats, visibility vests, etc. I think the accepted acronym is PPE (Personal Protection Equipment). But this photo that MWRD used for a cover photo really impressed on me how lawyers have changed our safety standards.

Now there is either industry or a chain link fence with barbwire on top around the canal. The near side is BNSF/Santa Fe property, which is illegal to be on. The far side is next to a public road so they have the fence with barbwire. This is looking west from the 130th Street Bridge in Romeoville, IL.
The one place I know of where the public can access the edge of the canal is at the north end of Stephen Street in Lemont, IL. Note the towboat headed towards Chicago in the distance under the bridge.

I was shocked that there aren't even handrails!
I went there more than once because you can "canalfan" as well as railfan. 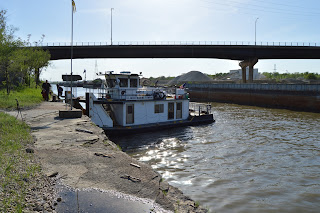 Then I saw why there were no handrails. This is where crew members get off to walk to downtown Lemont. 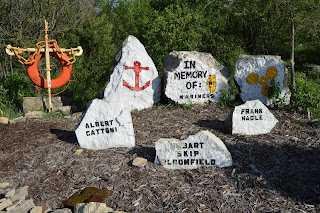 Looking around, I noticed there is a memorial. Evidently working on barges is rather dangerous. There was also a picnic table, so that makes it an even better place for rail+canal fanning. I'll have to remember to get a takeout dinner the next time I go there.

I have learned that there seems to be a convention that managers wear white hats and workers wear yellow hats. So you can tell how complicated a project is by the ratio of white to yellow hats. The higher the ratio, the more complicated the project. 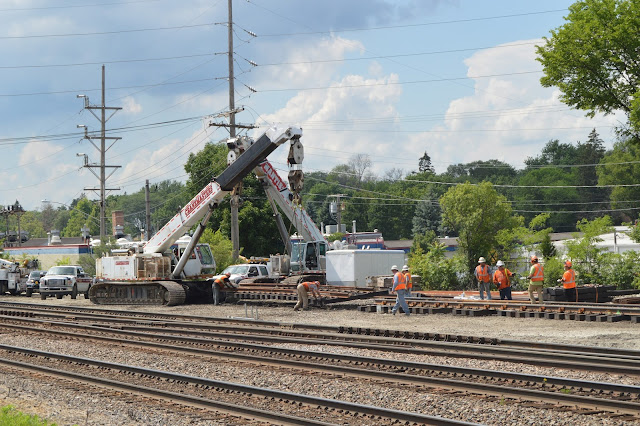 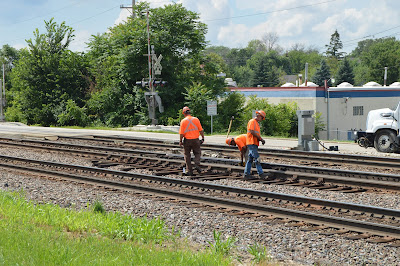 Update: I came across a picture of the crew meeting in the morning before work began. They were replacing some crossover switches in Downers Grove during a weekend with some pre-assembly on Friday. 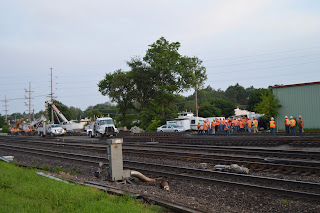 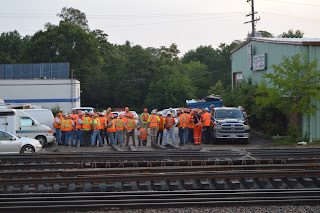 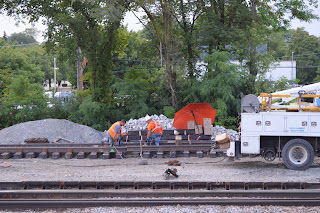 This is the only guy I saw that was not wearing a hardhat. 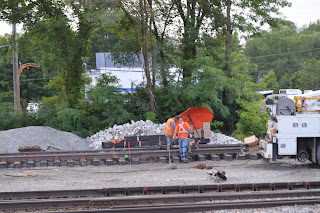 Whoops, here are two without hats. Given the rail cutoff saw in the foreground and the welding truck on the right, I would think this is an area worthy of eye and ear protection as well as hard hats.
The other end of the spectrum is wearing a hardhat in a safe environment. This MWRD employee must feel naked without his hat!


Update:
Mike Finney posted some pictures of Frankfort, IN. He indicates these two pictures were taken in 1967. I wonder if any employee saw them playing on the equipment or if they just lucked out. Now days you are in trouble if you even on railroad property. 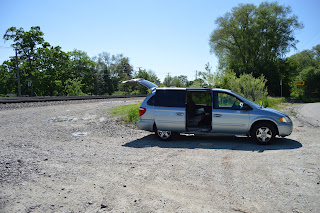 When I fist started railfanning the BNSF in Downers Grove, I very carefully parked on the edge of an access road near the public road. I am much further from the tracks than I am when standing at a crossing gate. But when a BNSF truck entered the road, it stopped and asked me what I was doing. I told him "taking pictures." He told me I can't park there. I learned later that I should not take pictures on the north side of trains anyhow because of the Sun's position.


9/11 has impacted us. A lot of access roads that were usable in the 1990s have not been fenced off. In fact, some public roads have been fenced off. When I tried taking pictures from the south side using Railroad Ave. I discovered that the Sanitary District has gated access to roads built with tax payer money.

Update:
The American Railroad Freight Car by John H. White Jr. described the dangers of the link-and-pin coupler design. On page 498 he puts that danger in perspective, which gives a nice summary of management's disregard of human life in the 1800s.


Care should be taken not to exaggerate the hazards of early American railroading. For all its inherent perils, it was not the most dangerous occupation. Sawmill workers faced being crushed by falling timbers or sliced to bits by huge saws. Steel mill workers were vaporized by molten metal. Chemical workers were dissolved by overflowing tanks of acid. Farm workers were regularly chewed up by threshers, binders, corn grinders, and a host of other machines. Miners unquestionably faced the greatest prospect of death and injury of any American worker. Between 1890 and 1900 twenty-five thousand to thirty-five thousand industrial workers were killed each year in the United States. One million or more were injured annually. The railroads' share of these grim numbers would be approximately 10 percent of the reported deaths and 4 percent of the injuries.

A tour guide of the iron works ruins in Joliet discussed the hazards of fueling the blast furnaces. At that time, a blast furnace was fueled by men pushing wheelbarrels to the top and dumping the contents into the hole from which hot gasses were spewing. Sometimes they would slip and become part of the blast furnace contents. Management did not care because they could always go to the front gate and choose a replacement from the crowd of men that wanted a job. Furthermore, there was no notion of financial support for the families of the dead workers.


You Tube comment: Chinese workers in life threatening danger while working INSIDE a hydraulic stamping press. With no EPA, OSHA or lawyers in China, the U.S. is at an unfair disadvantage.

[Note that they are not even wearing safety hats! In America, one is not only outside of the press, I believe they have to put their hands on bars before the machine will cycle to ensure their hands are away from the press. Actually, most sta

As late as the 1940s, machine operators still did not wear PPE. Note how close the operator gets to the lathe. This is a case where I would want eye protection.

When you watch videos of manufacturing before pick-and-place robots were developed, you have to wonder how much the employees suffered from repetitive motion injuries. I would never have thought that keyboarding was a strenuous activity until I developed tendinitis in my right wrist after a couple of decades of hitting the space bar while writing programs. I learned to drink coffee, use a mouse, and hit the space bar with my left hand. And for years I wore a wrist brace while keyboarding, which was most of the day.

Update:
People complain about all of the safety rules in America, but it looks like at least some of them do make a difference.  This wreck happened in Udaipur Rajasthan India and killed a safety officer and 3 workers. It looks like the boom snapped off completely. I think normally the boom buckles rather than break off completely. The following are comments from a posting by Ben Stalvey. It was a Manitowoc 999 with luffer.

I've learned that the "luffer" is the second boom they add so that they can lift loads over a tall object such as a building that is being built. The two little booms the crowd is in are spacers that give the cables that hold the luffer some leverage.

(new window) With all of those open gears, rods and belts, I would at least tuck in my shirt tail.


A video of the South Side Machine Works in St Louis I'm used to no hard hats and eye protection in historical photos. But this strikes me as a contemporary operation. I would want at least eye protection when working with some of these machines.

A video of bridge building in the past (source)   No hard hats even though rivets are being thrown high up in the air, no harness and fall protector, not nets, and built in place high above the river. Just as the steel industry back in the late 1800s, managers did not care if a worker got killed or mamed because they would just hire a replacement. And the widow and kids had no financial protection. Now it is common to build the spans or segments on the ground, float them into place on barges, and then lift them with a big barge crane or hoisting device on the already built part of the bridge into their final position in the bridge.

When a BBC crew shot some "footage" at the O'Brien WTP, the BBC crew was not required to wear safety hats even though the MWRD crew wore them.

Posted by Dennis DeBruler at 6:55 PM