(Update: Cutting as well as silo and trench storage)

A vintage blower I spotted at the 2016 Sycamore Steam Show & Threshing Bee. I'm motivated by a Facebook posting.

The silage wagon in the background would not be from the era of the blower. It was used for the demo because the show grounds did not have a silo. In practice, that short "silver" pipe would be long enough to go up the entire side of a silo. Of course, back then, judging from the old silos you can still sometimes find in the country side, silos were only 20 or 30 feet high.

When the guys at the show mentioned this was a chopper as well as blower and that the corn was brought from the field in bundles, I took a closer look. In the 1800s, a corn bundler would be pulled by a team of horses. (You Tube offered several other horse drawn corn binder videos: 1, 2, 3, 4, and 5. (I haven't watched them all.)) Note that the binder is powered by the wheels.

Originally, these bundles would be gathered and piled in stocks to allow the kernels to dry.

But in the case of corn silage, the bundles were piled on a wagon and hauled to the chopper/blower. They would lay each bundle on the conveyor you see in the first photo. 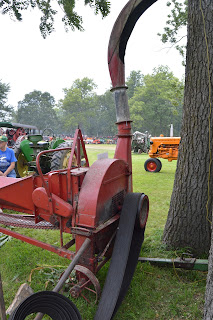 A picture of the back shows that it was belt driven by a steam traction engine. (JI Case, Illinois Thresher, and others) The steel wheels also indicate this is old equipment. Since no one else was around this piece of equipment, I asked of they would raise the cover so that I could see the "guts." 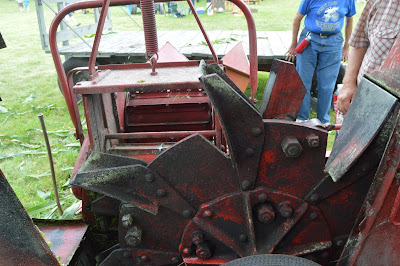 You can see three of the wide blades that throw the material up the pipe. Near the top of the flywheel, by the blue pants, you can see one of the knife blades that chops the corn as it comes off the conveyor. There is another knife blade peaking out to the left approaching the shear plate. 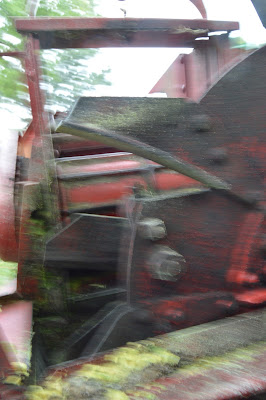 I stepped over to the left to get a better shot of that blade, the shear plate and the "roller" that helps feed the corn into the chopper. Unfortunately, it is blurry. Looking at the file properties of my photos, I took all of these pictures at f9 because I forgot to change the camera from "aperture priority" to "program mode" after my last video. The shutter speed was 1/20th. I can normally hear when a shutter is that slow and know to reset the controls. But I missed it this time. Oh well, this give me a good excuse to go to the 2017 show and try to get better photos. 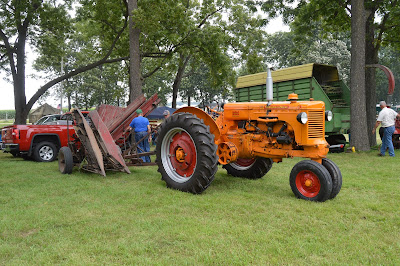 In this view of the corn binder, I include the tractor because it is aMinneapolis-Moline U. My grandfather's "big tractor" was a U so I have a sentimental attachment to them. Note the belt pulley in front of the rear tire. 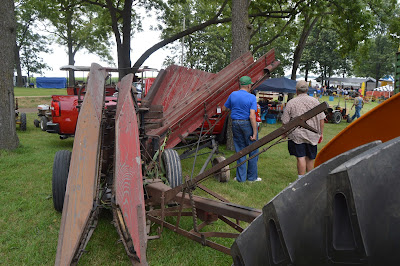 One of the men I was talking to said that modern hybrid corn plants have become so tall, and I assume so strong, that now someone has to ride on the rear of the binder to help shove the corn over.

The pictured PTO-powered corn binder looks a lot more modern than I thought corn binders would be. I had assumed that soon after they developed PTO driven implements, they would have switch to the newer design of putting the fan blades on the pull implement and chopping into a silage wagon. But to switch, a farmer would have to buy the forage wagons as well. So maybe they continued to build corn binders into the PTO era to save farmers the cost of converting all of their equipment.

This is a contemporary picture of what was my grandfather's dairy barn. The silos, from left to right, are 50, 75, 40 and 60 feet. My first memories of the barn would be from the late 1950s. Back then only the 40' silo existed. The tramp shed and extra mow space along the road also did not exist. I remember the blower they used for the 40' silo was belt driven by their Minneapolis-Moline U tractor like the one pictured above that was hooked to the corn binder.. Before they built the 60' silo, they had switched to a PTO driven blower.

A video that shows a leaf of hay being blown out of an unconnected blower. You can hear the tractor slow down when it has to chew up a leaf. Normally chopped haylage would be dumped in a continuous stream and the tractor would not bog down.

Posted by Dennis DeBruler at 1:16 PM