(Satellite)
Marty Bernard posted seven photos with extensive documentation. And he posted a photo looking East out of the tower. 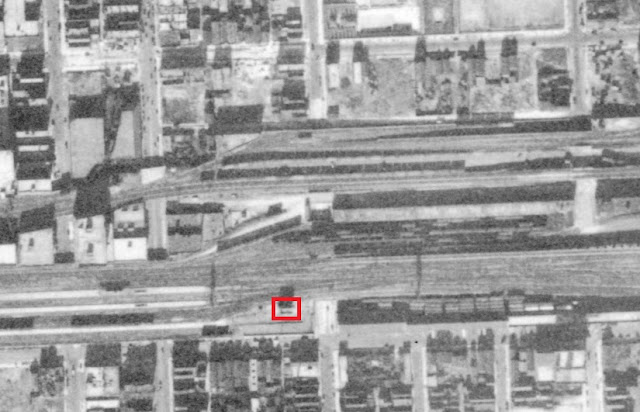 1938 Aerial Photo from ILHAP
I believe you can still see a couple of corners of the foundation. Especially the southeast corner. I highlighted the remnants with red rectangles.

Update: Lou Gerard posted a 1990 photo of the tower and an Amtrak train on the south leg of the wye to reverse its direction into Union station.
A comment from that posting:
Harold J. Krewer Pretty sure the tower was closed about the time when they moved the Galesburg dispatching office to Fort Worth, which was early 1994.
Steven Holding posted two photos with the comment: "Union Ave Tower on CB&Q/BN 1973 posted there."

I took this photo in October 1985 of EMD E9 Unit #9904 (ex CB&Q 9977) getting a wash down at the rack near 16th and Morgan. Fifty years earlier, Zephyrs would go through the same apparatus to wash down after a long journey. This locomotive would be one of the few surviving E-Units, becoming Illinois Central #100.


Back in the early 90's I got a phone call from a friend that worked for the BN about a business train on the racetrack on it's way into the city. Well after a quick trip down Lakeshore Drive to downtown and over to Union Ave. I got lucky as the train was waiting for a signal. BN 9920 leads the train into Union Station.

[You can see the shadow of the tower in his first three photos.]

Marty Bernard posted two images with the comment: "CB&Q Union Avenue Tower, Chicago, 1963."
Marty Bernard shared
Marty Bernard posted views of B&O trains from this tower with the comment:
The Route Out of Grand Central Station, Chicago
Trains leaving Chicago's Grand Central Station ran south for a short distance then turned west just short of the St. Charles Air Line and crossed the South Branch of the Chicago River on a double-track lift bridge which has been in the up position, I assume, since soon after Grand Central Station closed in 1969. Then the tracks continued west crossing over the south end of the PRR Coach Yard (now Amtrak), the south leads from Union Station, and the south end of the CB&Q Coach Yard (now Metra/BNSF). The tracks dropped to ground level and continued west under the Dan Ryan Expressway, and past CB&Q's Union Avenue Tower.
The pictures below were taken from the Union Avenue Tower when I was a student leverman there and should be considered grab shots.
The tower was on the south side of the east/west CB&Q tracks at the beginning of the race track to the west. There also was a freight transfer track that went all the way to Clyde Yard. The track just north of the tower went east to the south leg of the wye and to the tracks coming south out of Union Station. The next two tracks to the north went east to the double-north leg of the wye and eventually to Union Station. The next tracks went east to the BNSF/Metra Coach Yard. The next tracks went east up the St. Charles Airline ramp. All these tracks and the track to the train washer were controlled by Union Avenue Tower. Then the were a few local tracks switched by the CNW connected to tracks to the west. Lastly the farthest north tracks were those from Grand Central Station. The trains in the photos are on these tracks. Union Avenue Tower is long gone.
Captions with photos.
Marty Bernard shared

Posted by Dennis DeBruler at 6:29 AM