(Bridge Hunter, Satellite)
We have already seen one trail+rail bridge. This is another bridge that shows that a trail (Hockhocking Adena Bikeway)  and a railroad (Hocking Valley Scenic Railway) can coexist on a route. The HVSR uses an abandoned segment of the C&O/Hocking Valley Railroad. I use the label rrMisc instead of rrCaO because it was still Hocking Valley in my 1928 Railroad Atlas. I need to figure out a railroad label for museum and tourist railroads. In the meantime, I'm going to label it rrNew. I was surprised to see a train on this bridge because, when I studied their web site, I found trains that went just northwest of the depot. This bridge is southeast of the depot.
I first noticed it while I was checking out the shops area of the HVSR. I could see a curved chain-link fence indicating that the second track had been replaced with a trail. So when I was done taking pictures of the HVSR equipment and buildings, I drove around to the other side to find legal access to the trail. 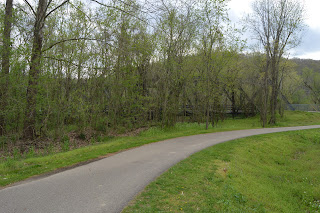 As I walked up the trail from a parking spot, I got an overview of the bridge peaking through the trees because the spring foliage had just started growing a day or so earlier. 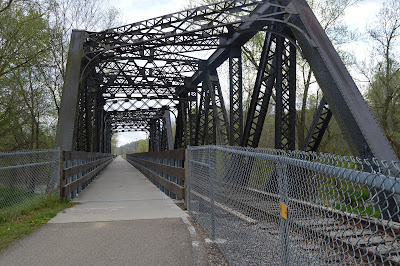 Fortunately, the chain-link fence becomes a nice plank fence in the bridge with a concrete base. You can see in the picture above with the train that there was more than one span. Here we see there are just two. Also, the spans are skewed.

Since I was standing next to the fence, when I turned around 180 degrees to get a shot in the other direction, you can see over the fence. You can see a cut of the passenger cars, some of their "antique" boxcars, and the red engine maintenance building on the right. 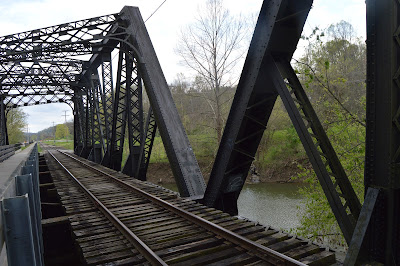 I stood on the bottom rail of the fence to get a good view of the truss members. I tried using GIMP to rotate the picture, but I lost too much of the top cord members. Also it is interesting to note that the member on the right is perfectly vertical. That is probably what my eye was keying off of. So why is the rest of the bridge so crooked? Obviously, this bridge is riveted. Note the heavy gussets to attach the vertical members to the cross girders. 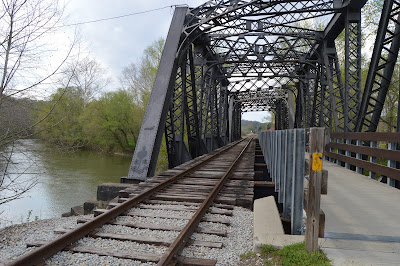 When I got on the otherside of the bridge, I had a nice view of the Hocking River as well as the bridge. 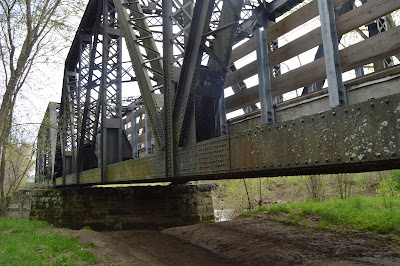 When I got back on the "northish" side, I followed a "path" down under the bridge. This view shows that the first span is basically over land. Most of the river is under the second span. 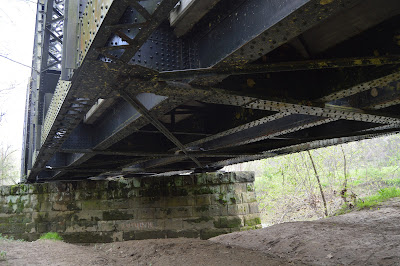 Since it is a rather rare oportunity to get a view under a bridge, I took a closeup of the cut-stone pier, cross girders, stringers, and diagonal bracing. 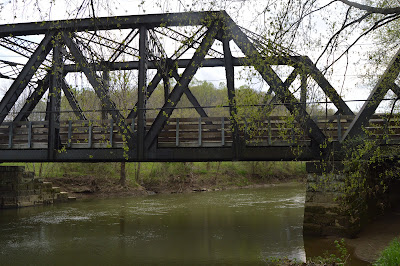 Then I walked downstream along the bank trying to find a big enough break in the treeline to get an elevation shot. This is most of the span that goes over the water. The stone on the right is the pier between the spans and the stone on the left is an abutment on the river bank. 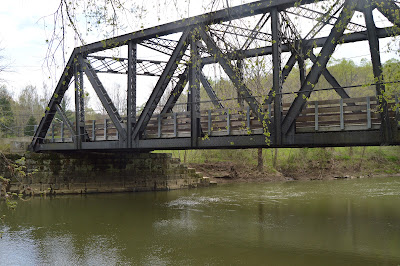 A different angle through the gap in the trees allows me to get the rest of the span and most of the abutment. 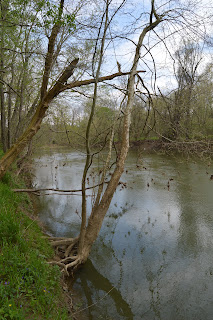 I took this picture to capture the tenacity of nature. A seed must have fallen on the side of the bank. It did not sprout roots into the air, only to the one side that would go into the bank. Then erosion removed part of the bank.
If I'm willing to have more clutter in the foreground, I can frame the entire span.

I like getting multiple angles of a truss bridge because some views allow spotting details that other views don't have. I've noticed that some members use V-lattice while other use X-lattice. And the end members use a solid plate on the outside face. 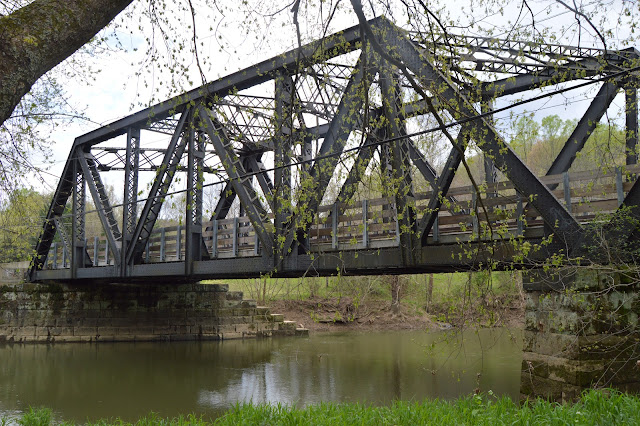 I went on the upstream side, which would have been the sunny side if the sun was out. (Actually, I was lucky I didn't get caught in a heavy thunderstorm. Also, I don't particularly like a strong sun when taking pictures of truss bridges because the shadows can introduce some confusing lines.) This closeup was to capture the detail of a gussets joining the various members at a joint and the myriad of rivets used to build the bridge. 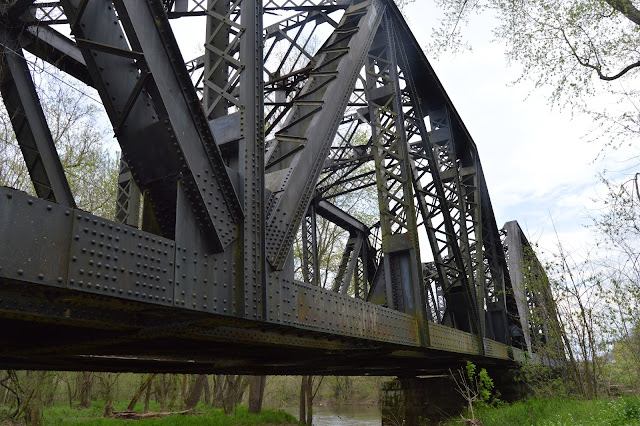 While I was walking on the river bank, I had noticed tree limb debris indicated that flood waters do flow across where I was walking. I took this view to show how the one span is over land (floodplane) and you can see a log caught by tree trunks on the other side of the bridge. 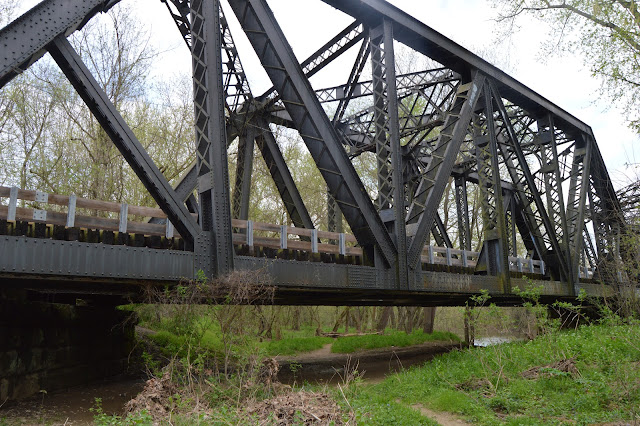 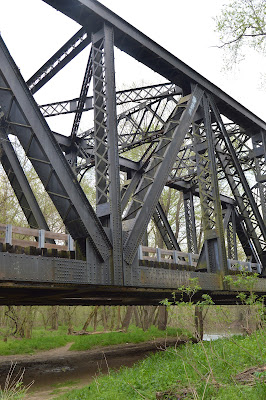 I finished with a couple more detail shots. 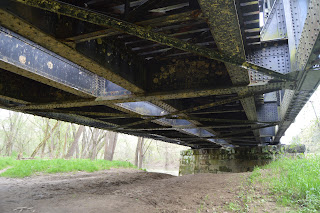 Posted by Dennis DeBruler at 1:23 AM