(Bridge Hunter; Historic Bridges; John Marvig; Satellite)
Looking at a satellite image, one notes that they have had serious problems with ice flows. They have added the biggest "ice breakers" I have ever seen on the up-river side of the piers.

I believe the postcard picture is of this bridge which is now a "nowhere to nowhere" bridge.


An old aerial photo shows that this bridge was part of a grade level industrial spur that connected their yard facilities on the east bank with industries on the west bank. It looks like this yard was obsolete by 1939.

Another surprise when looking at a satellite image is the old steel truss bridge used by a trail did not exist in 1939. (Update: it is not an old truss bridge. It is a new truss bridge that was evidently built for the trail.) Given that they have a nice trail head on Hurds Island, that bridge is going to motivate me to get off my rear-end and hike a trail. (Update: I did hike the trail. Search for "Hurd Island" in 20170725.) 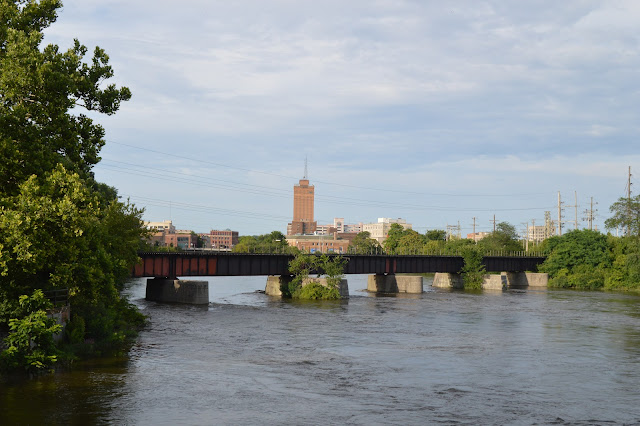 Posted by Dennis DeBruler at 6:22 PM