My postings on the Marseilles Dam accident, The Force of Outdraft, and the NTSB report made me wonder what the dam looked like now, so I made a trip to Marseilles. The road bridge includes a bike trail on the dam side so it was easy to get downstream elevations. The bridge has one of the best handrails I have seen so far. (It is amazing how much of a connoisseur of handrails you become when walking out on bridges that are about 100 feet above ground/water to take pictures. Some handrails are too high and you have to shoot through a chain-link fence. Others are too low. The champion unsafe bridge is the Warrenville Bridge built by the Tollway Authority.)


Since the "temporary" cofferdam is still there, the are using just 3 of the eight gates. This is probably the only dam in the country that has some gates almost wide open while others are completely shut. The gates are numbered from the right and we can see that gates 2 and 3 still have their bulkheads installed. (They had one bulkhead available because it is needed for standard maintenance activity. The second bulkhead had to be made as an emergency after the accident.)


Evidently the cofferdam has been allowed to erode on the left side because I assume the interior was originally dry. 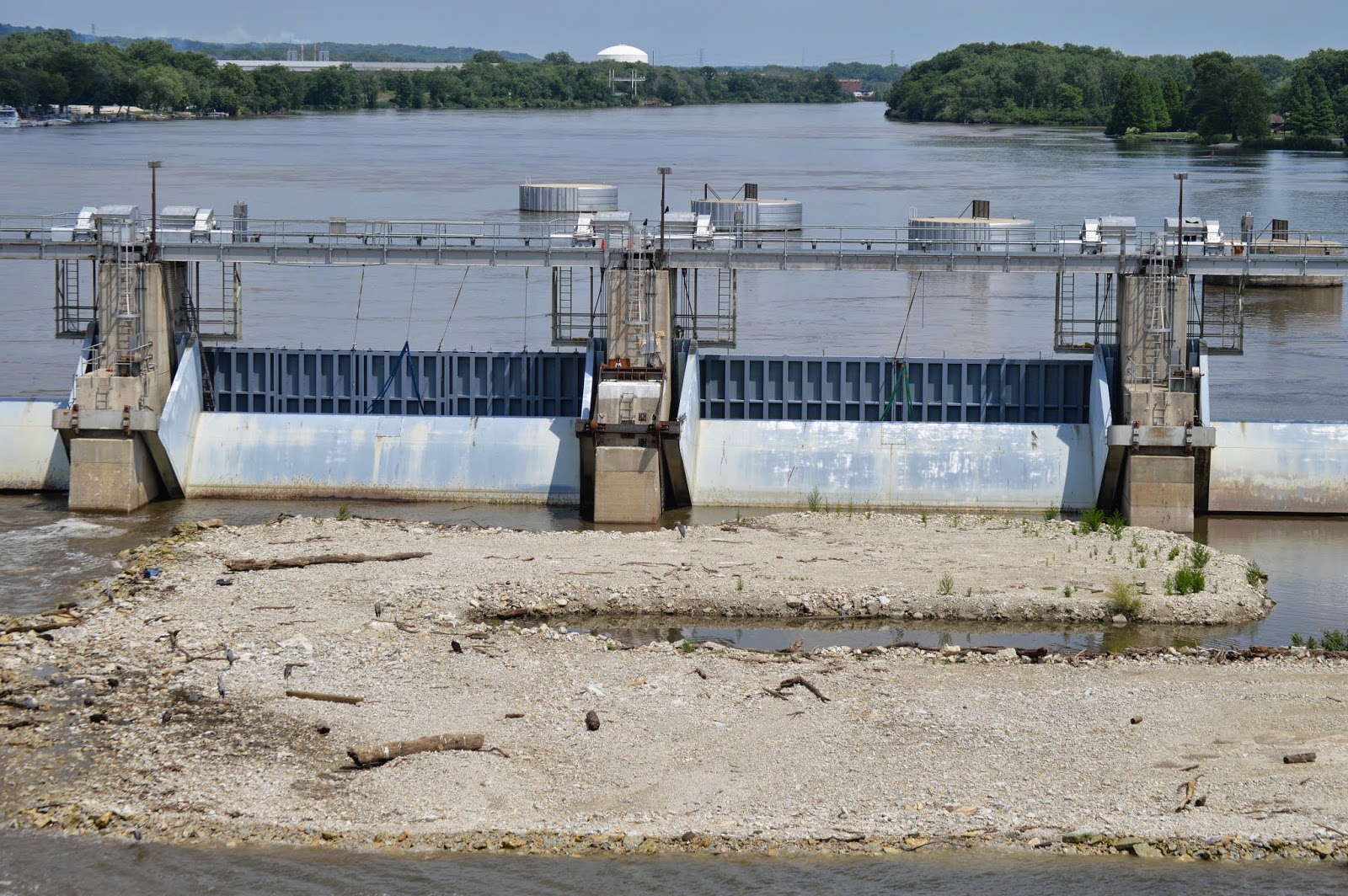 The temporary repair of the Tainter gate trunnion mounting block is done. 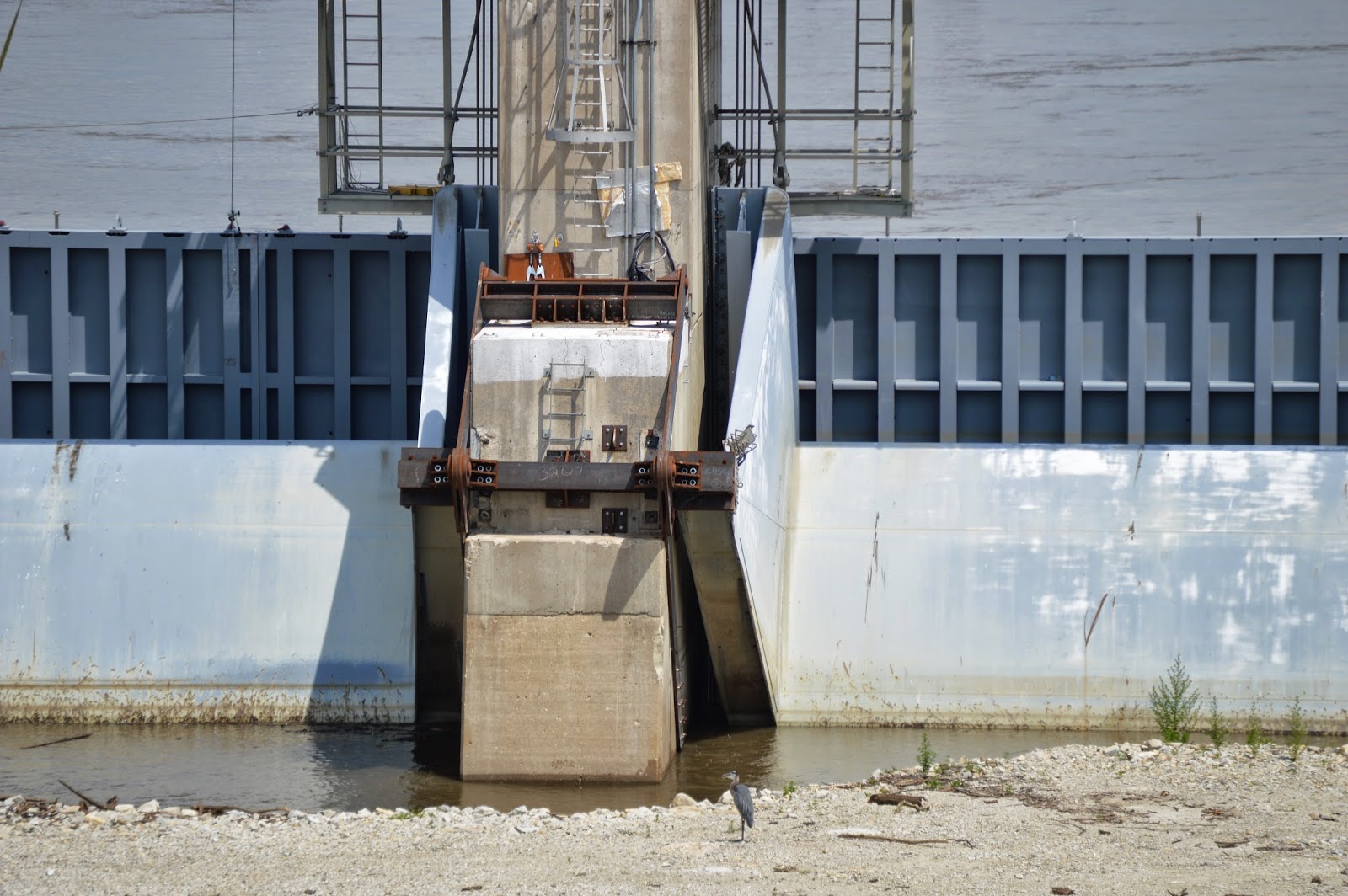 But why do 10 million dollars of temporary repairs to make the gates operational again, and then not use them?


The upstream view is more interesting than usual because of the bulkheads in gates 2 and 3 and the three open gates. (And, I'll admit, because of the ducks. These ducks are in the forebay of the north millrace.) 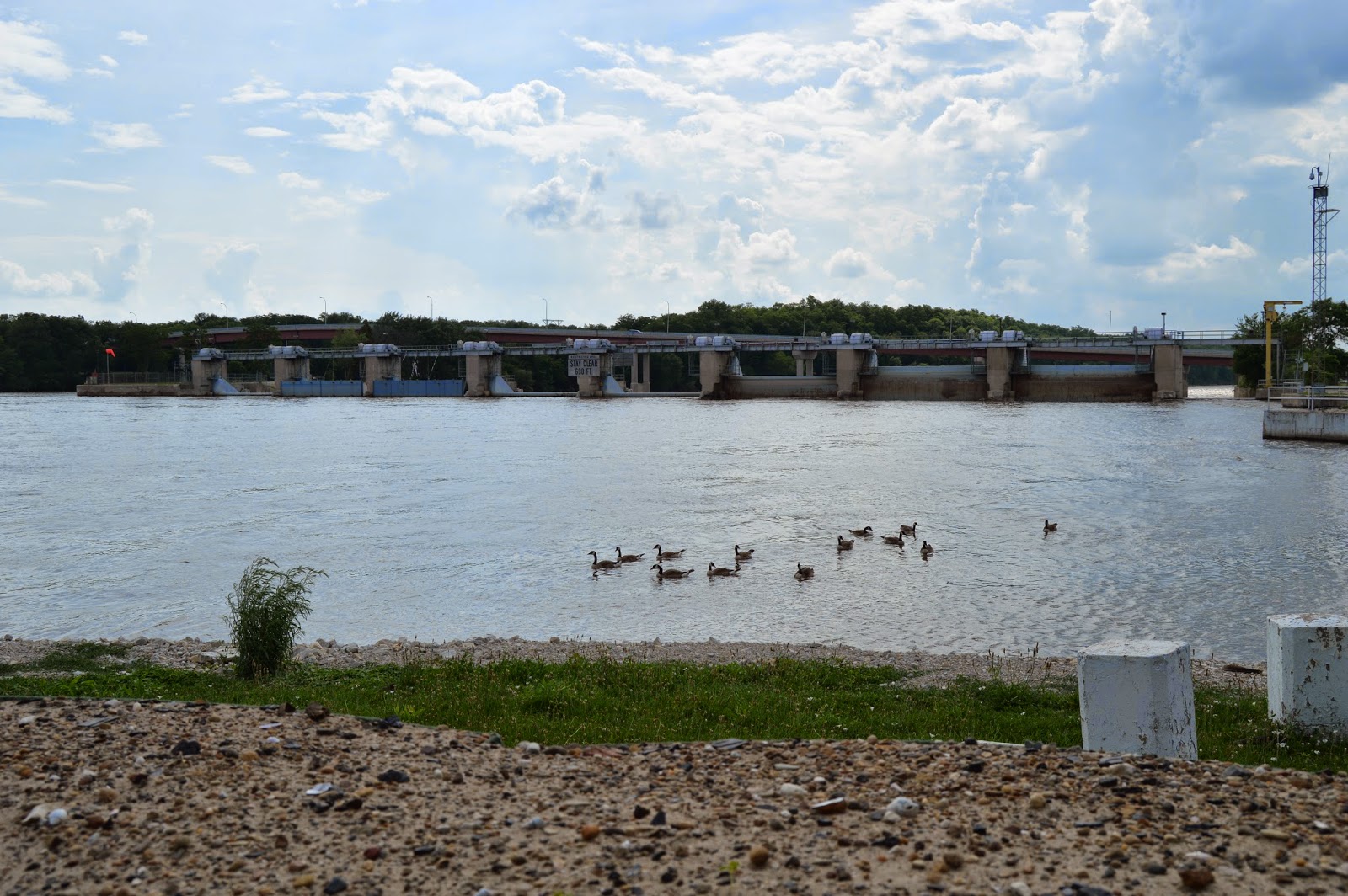 I took a closeup of the open gates because I don't often get a chance to photograph a dam when the river has a strong current. 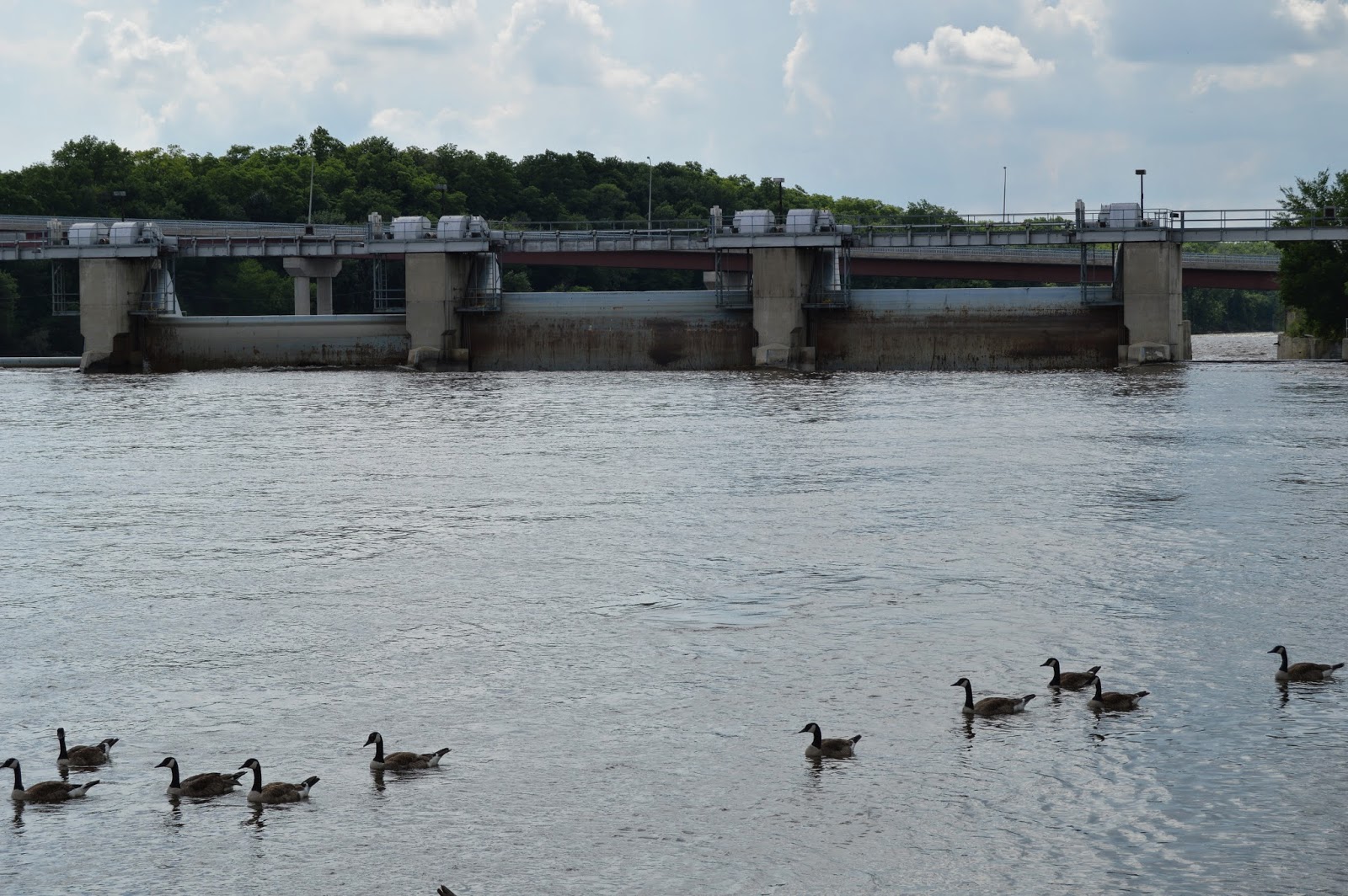 I digitally zoomed in on the pier between gates 6 and 7 to determine that the control equipment must use windlasses to spool in 4 cables that are attached to the bottom of each end of a gate. 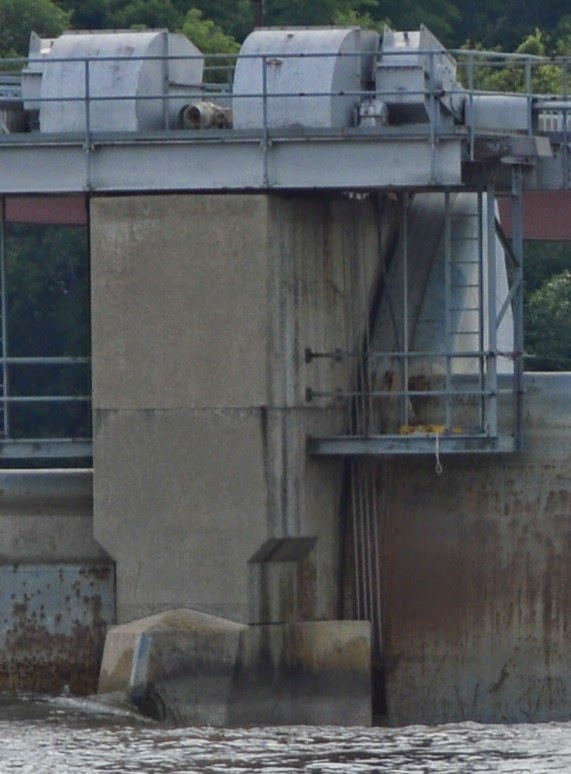 This dam must need frequent flow adjustments because an electric motor is dedicated to each gate. Some dams use a traveling crane to raise and lower the gates. A shaft across the top of the gate allows an electric motor to drive both windlasses.

I also got a closeup of the open gates from the downstream side because, again, I don't often get a chance to see such a good view of a heavy flow. 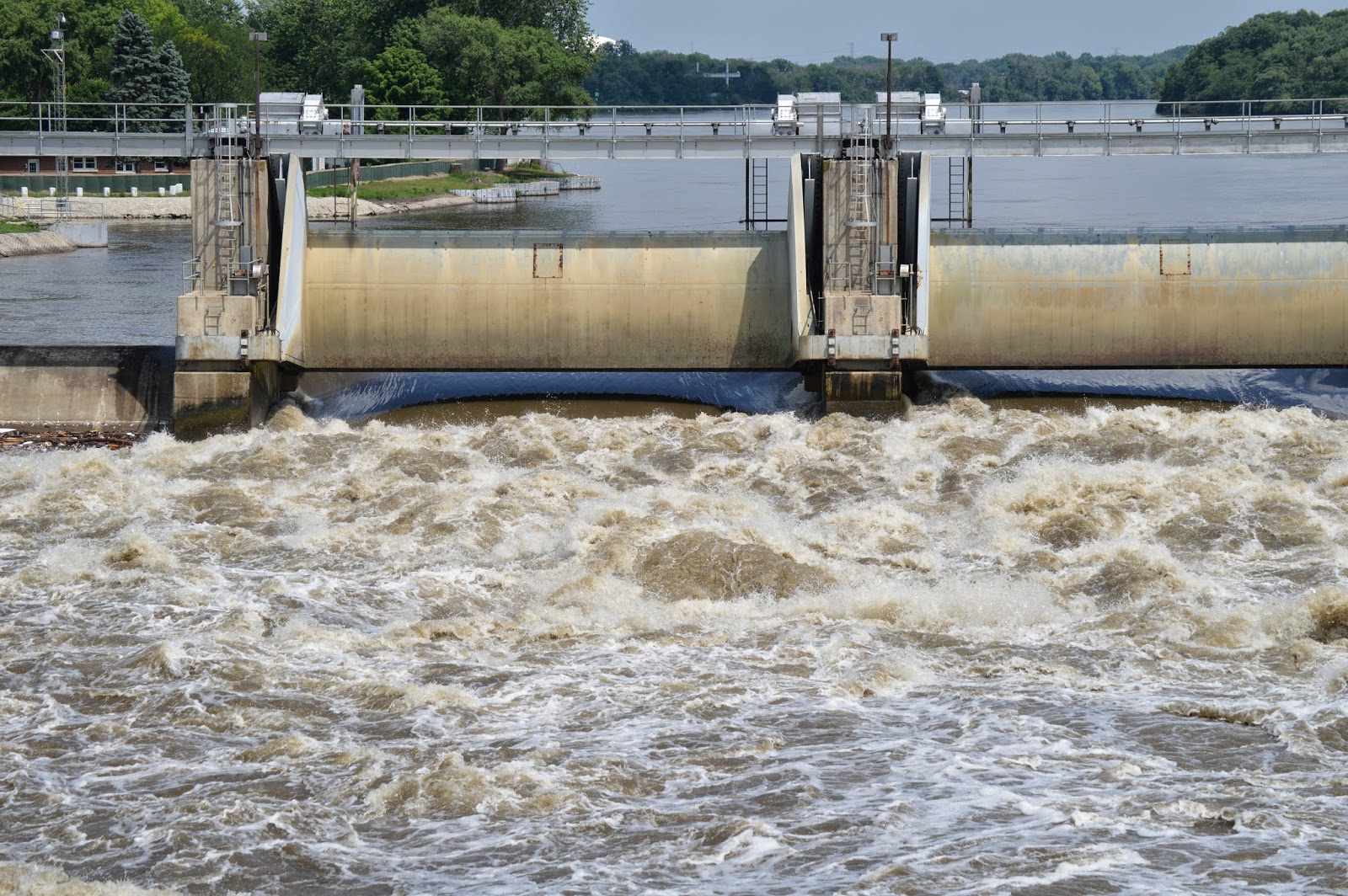 And a closeup of the flow at the edge of the river because the "valley" was a standing wave. That is, the "hole" in the water just this side of the tree stayed there. 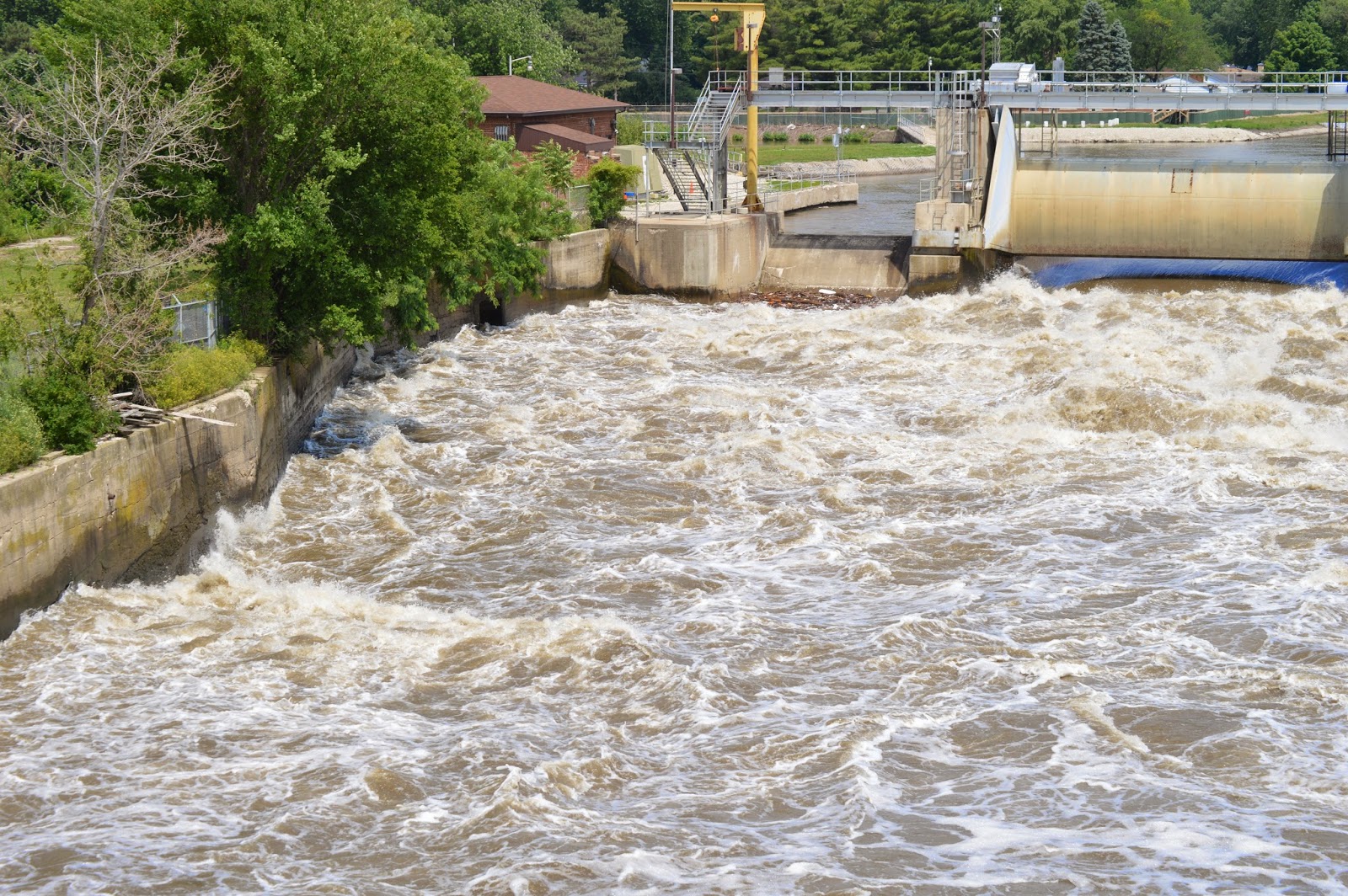 I'm glad to see that the river edge was concrete lined. A flow that heavy for weeks could normally cause a lot of erosion and scouring. Unlike many river beds, which would be sediments of clay/sand/muck, the river bed here is probably bedrock because it is the head of a rapids; and the rapids would have scoured the sediments away many millennia ago.
Posted by Dennis DeBruler at 9:58 PM